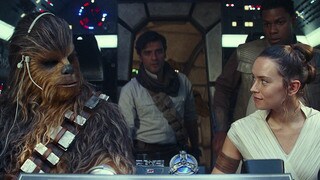 A legendary Wookiee warrior and Han Solo’s longtime co-pilot, Chewbacca continues to serve as faithful first mate to carry out daring missions against the First Order behind the controls of the Millennium Falcon. Known as Chewie to his closest friends, he was part of a core group of rebels who restored freedom to the galaxy during the reign of the Galactic Empire. Known for his short temper and accuracy with a bowcaster, Chewie also has a big heart and unwavering loyalty to his friends. 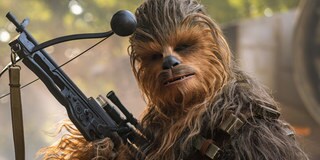 5 Reasons Why Chewbacca is the Best Friend in the Galaxy

Few are more loyal, kind, and brave than our favorite Wookiee. 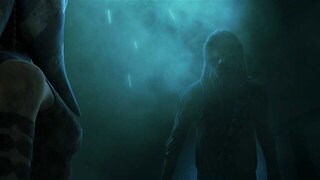 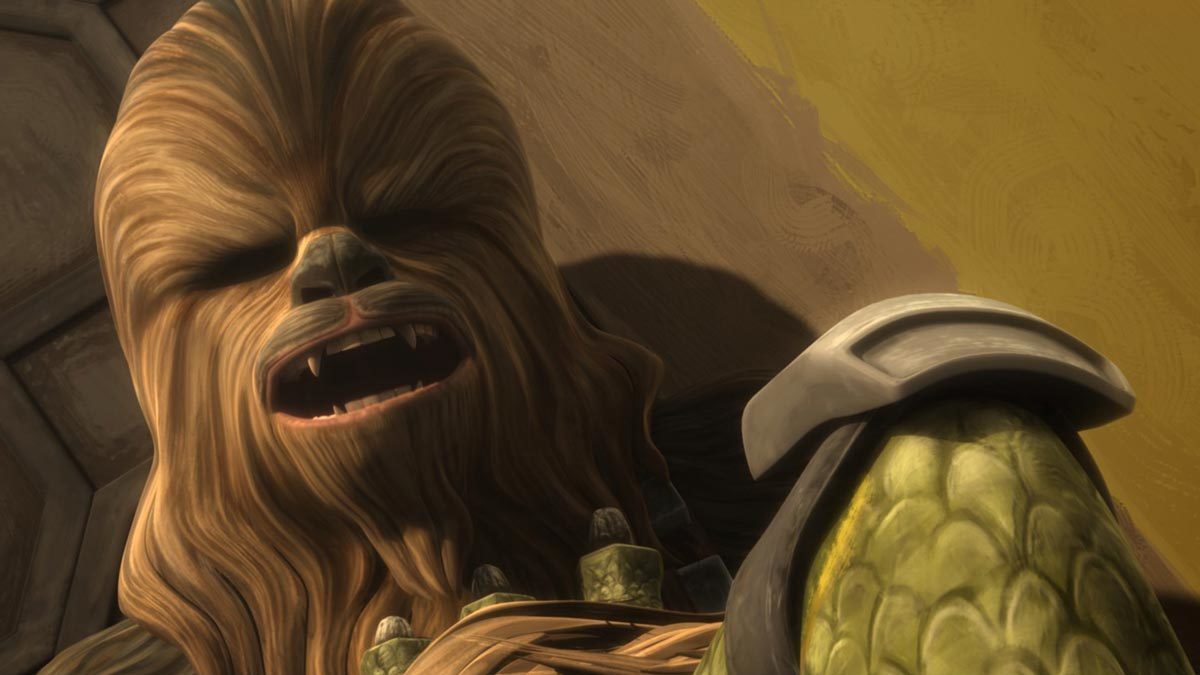 During the Clone Wars, Chewbacca was one of several individuals from diverse species captured by Trandoshan hunters. Taken against his will to a jungle moon, he was released and hunted for sport. Chewie would not give up without a fight, however, and worked with new ally and fellow captive Ahsoka Tano to stage a revolt. Together, they defeated the Trandoshans and returned to their respective homes. 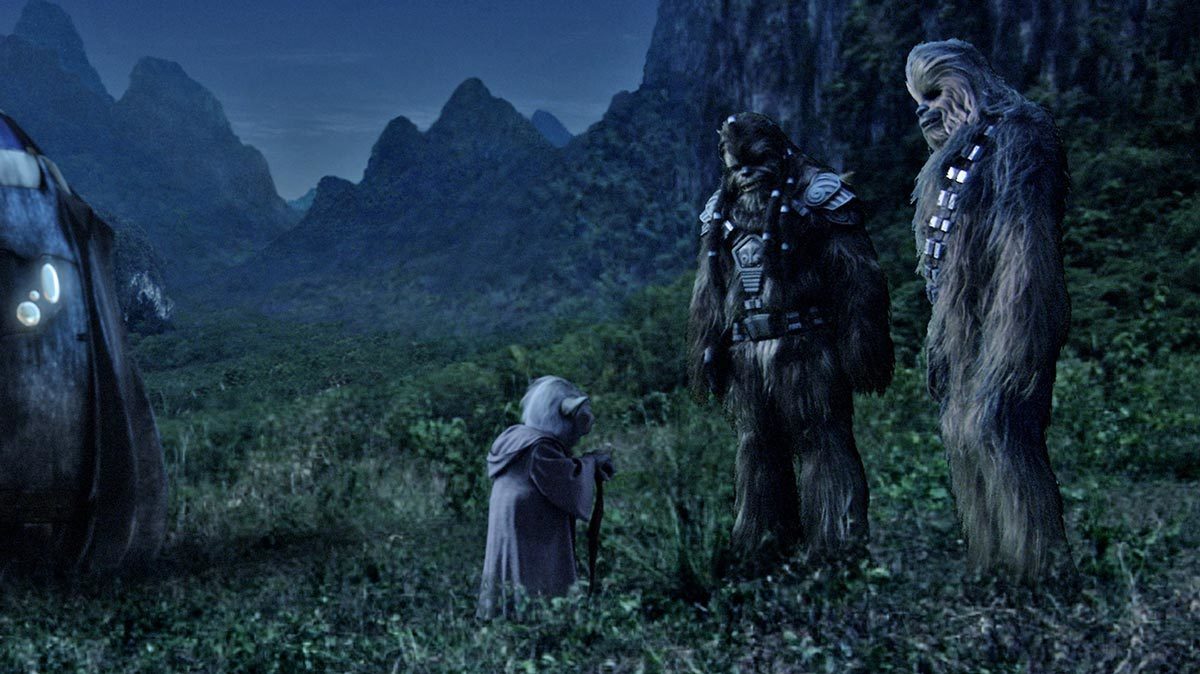 As Wookiees had good relations with Yoda, they welcomed the Jedi Master and clone troopers to Kashyyyk, their homeworld. During one of the Clone Wars’ final battles, Chewbacca fought against Separatist droids alongside Republic forces -- until the execution of Order 66. In an effort to save Yoda, Chewbacca and fellow Wookiee Tarfful led the Jedi to a secret escape pod and evacuated him from the planet.

After the Clone Wars, Chewbacca was separated from his family and tribe, becoming a fugitive. Betrayed by a bounty hunter, he was turned over to the Empire ending up on Mimban and kept shackled in a muddy, makeshift prison. The Imperials tormented their captive, referring to him as “the Beast.”

Chewie escaped with a young Imperial deserter named Han Solo, an unlikely encounter that marked the beginning of their long friendship. The two joined Tobias Beckett’s gang of ship thieves on a mission to steal coaxium from an Imperial conveyex on Vandor. When that mission failed, they found themselves headed for Kessel as part of an even riskier plan.

Once inside the mining colony, Chewbacca was able to help free the Wookiees enslaved in the spice mines, while L3-37 enabled a revolution of droids and other prisoners. For a moment, it seemed he had found his tribe and a way to return to his homeworld of Kashyyyk. Instead, the loyal warrior opted to stay and help Han, who had no one.

The crew managed to escape the surface of Kessel with several volatile canisters of raw coaxium, but lost L3-37 in the process. As Han took the controls to mount his legendary Kessel Run, a bold shortcut to avoid an Imperial blockade and arrive on Savareen before the hyperfuel canisters triggered an explosion, Chewbacca took his seat as the ship’s co-pilot for the first time.

Chewbacca’s loyalty would be tested as another run-in with Enfys Nest swayed Han’s belief in completing the job as planned, but after betraying Dryden Vos and being forced to help Beckett steal back the precious coaxium, Han came back for the cargo and his friend. Together, they delivered the hyperfuel to the freedom fighters and continued on to Numidian Prime, where Han won the Falcon from Lando Calrissian, marking the start of the duo's new life earning a living as smugglers. Together, they traversed the galaxy aboard the ship they would come to consider their home. 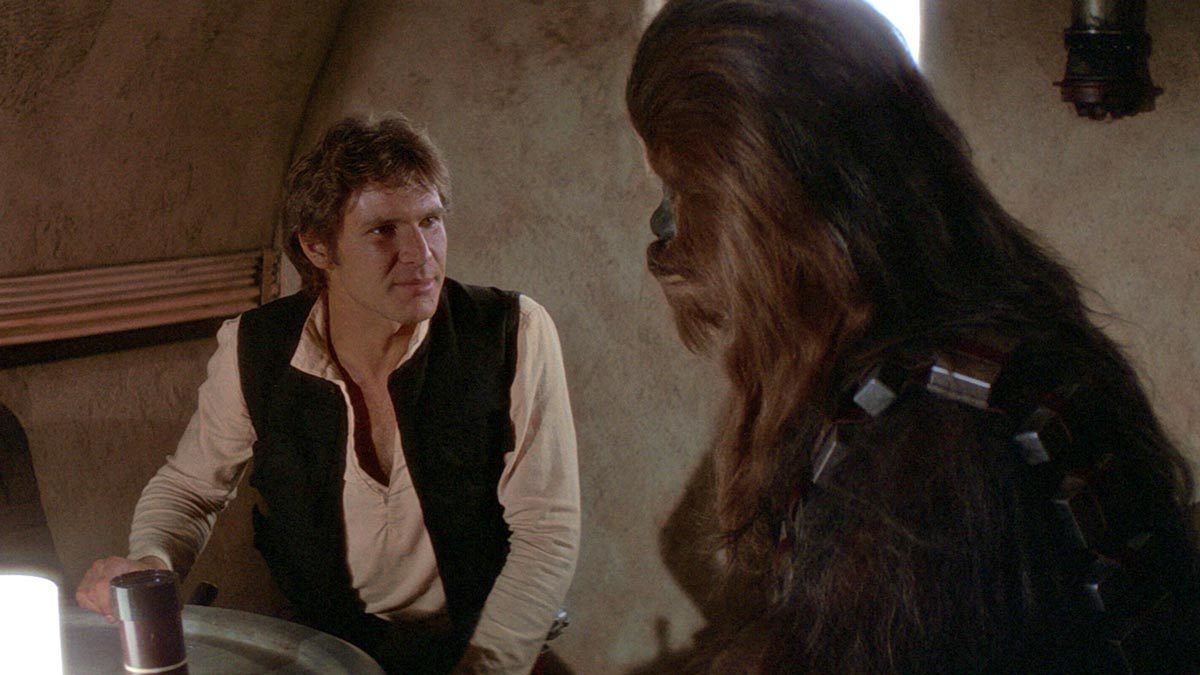 After Han won the Falcon from Lando Calrissian, he and Chewbacca spent years earning a living as smugglers. While in Tatooine’s seedy Mos Eisley cantina, Chewbacca met Obi-Wan Kenobi, who was looking for passage to Alderaan. Chewie arranged a meeting between the rogue smuggler, the Jedi, and Luke Skywalker. The group reached an agreement on a fee -- in truth, Han was desperate for the money -- and were forced to blast their way past stormtroopers and out of the spaceport aboard the Millennium Falcon. When they reached their destination, the group found that there was no Alderaan left; it had been destroyed by the Empire’s Death Star, and their ship was soon caught in the doomsday weapon’s tractor beam. With Han and Luke in stormtrooper disguise, Chewie posed as an Imperial prisoner to allow for easy passage inside the space station. They rescued Princess Leia, who was held captive, and escaped. Later, Chewbacca was at Han’s side in the Millennium Falcon as they saved Luke during the attack on the Death Star. 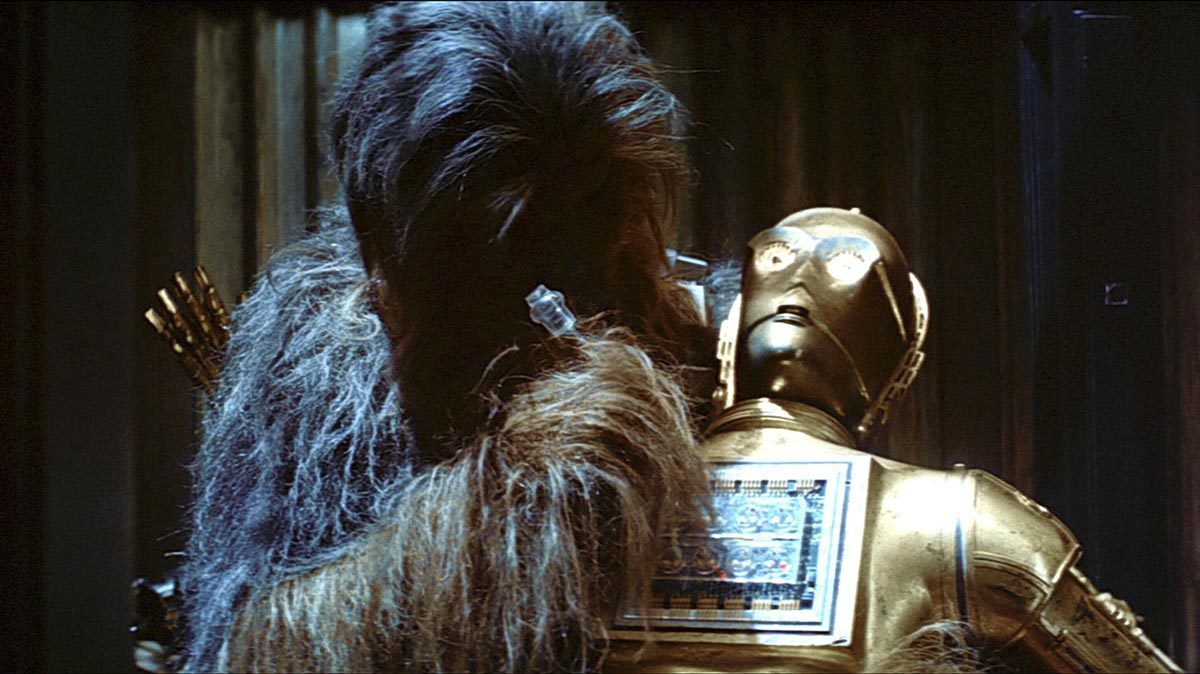 Chewbacca and Han remained with the Rebel Alliance after the Battle of Yavin, and helped establish its new base on the ice planet Hoth. But Han had to pay off Jabba the Hutt, meaning he and Chewie would be forced to leave their friends. Things changed, however, with the arrival of an Imperial probe droid. Han and Chewie engaged it, all but confirming the spy droid was sent by the Empire. When Imperial forces arrived, they made a hasty escape with Leia and C-3PO on the Millennium Falcon and were pursued through an asteroid field. Believing they had evaded Imperial pursuit, they landed on Cloud City -- a facility run by Han and Chewie’s old compatriot Lando Calrissian. But bounty hunter Boba Fett and the Empire arrived before they did; C-3PO was shot, Han was tortured and frozen in carbonite, and all seemed lost. Trying to make up for his mistake, Lando freed the remaining Rebels -- and Chewie thanked him with a powerful chokehold -- before they all escaped on the Falcon. 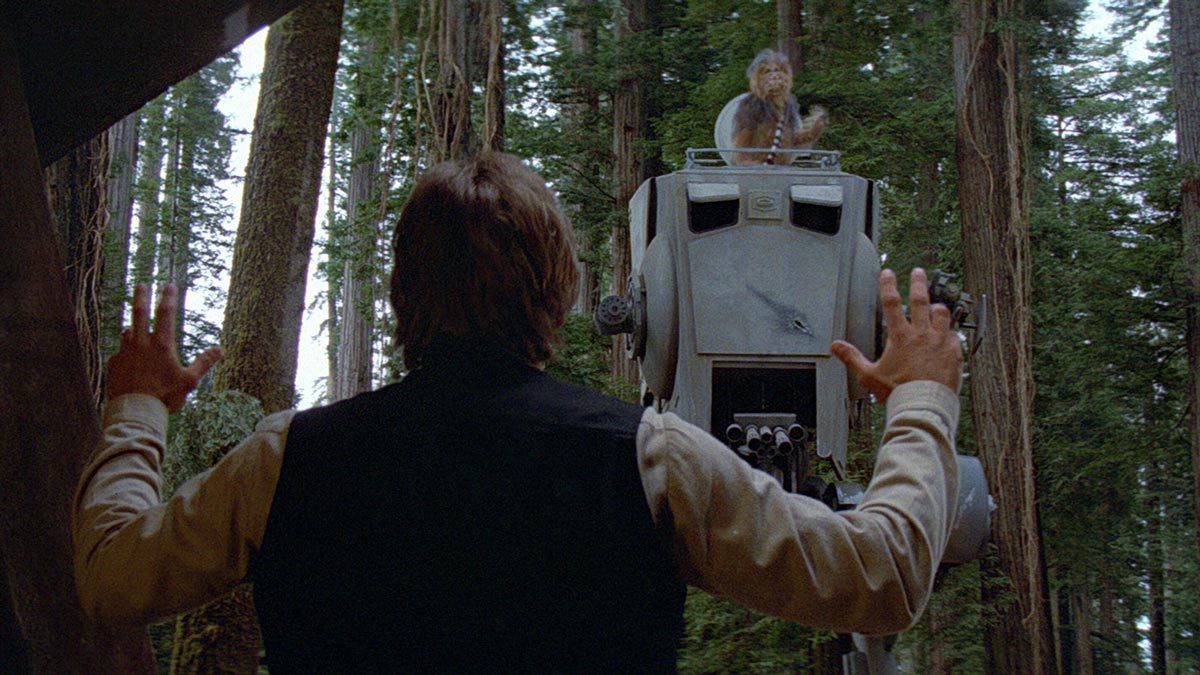 With Han held at Jabba’s Palace, Chewbacca was part of the rescue mission hatched by the ace pilot’s friends. He appeared as a captive of the bounty hunter Boushh -- in reality, Leia in disguise. Leia managed to free Han from the carbonite but was quickly captured by Jabba, who didn’t fall for their ruse. Chewbacca was kept in a holding cell, reunited there with Han. The crime lord sentenced the small band to death by Sarlacc, but his underestimation of Luke Skywalker proved to be his undoing.

Later, Chewbacca joined Han and friends on the dangerous mission to destroy the new Death Star’s shield generator, located on the forest moon of Endor. While Chewbacca’s curiosity about a dead animal led to the group’s capture by Ewoks -- as Han said, “Great, Chewie. Always thinkin’ with your stomach.” -- it turned out to be a fortuitous mistake. The Ewoks became integral allies in the Battle of Endor. When things looked dire, Chewie and two of the furry creatures swung from a vine onto an AT-ST, commandeering the vehicle. Turning the Empire’s weapon against them, Chewbacca and his new companions all but wiped out the Imperial ground forces, allowing the Rebels to destroy the shield generator. 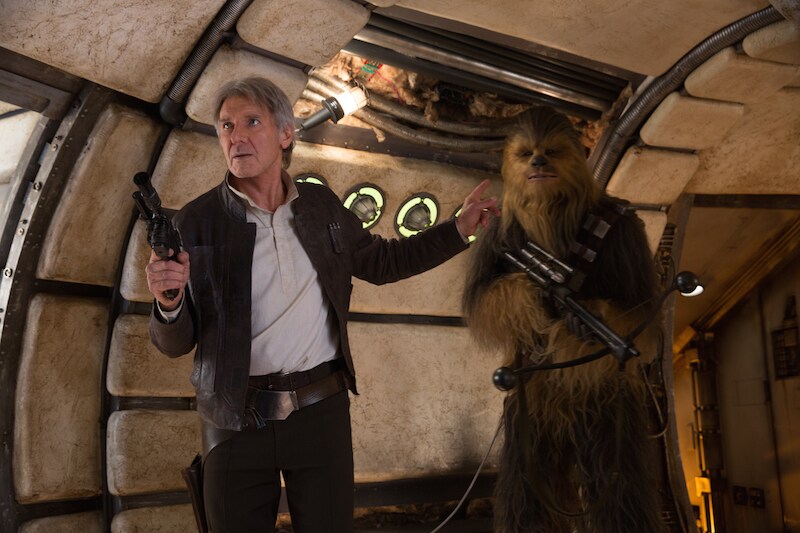 After the Battle of Endor, Chewbacca played a key role in liberating his homeworld of Kashyyyk from Imperial forces. The Wookiee and the Corellian earned renown as New Republic heroes, but the good times were not meant to last. Ben was lost to the dark side of the Force, becoming Kylo Ren. Chewbacca returned to his family for a time, but rejoined his old smuggling partner after Han and Leia’s relationship foundered. The two resumed trying to make a semi-honest living in a chaotic galaxy. 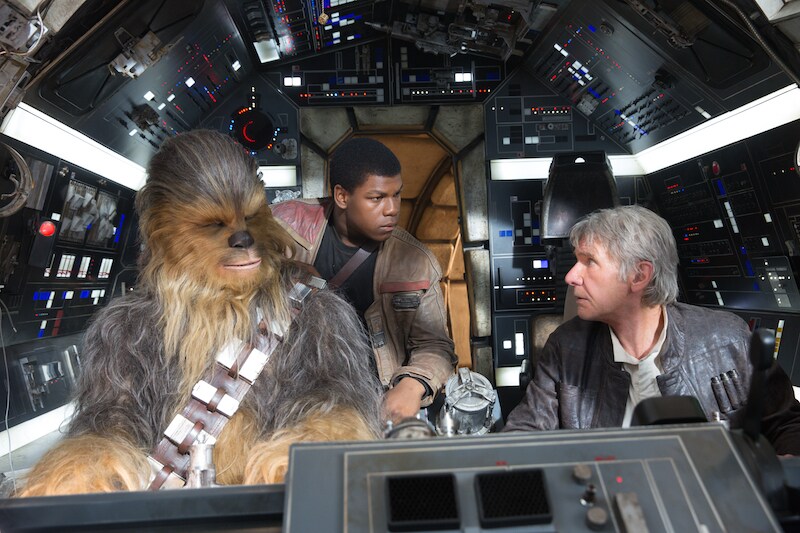 Chewie and Han’s luck seemed to turn when they recovered their beloved Millennium Falcon, lost years before through a fickle turn of fortune. But the galaxy was once more engulfed by war, and the two partners were in the middle of the trouble. Han died during the Resistance assault on the Starkiller Base, stuck down by his own son. Chewie would have to find a way to carry on without his beloved friend.

Chewbacca accompanied Rey to the lost planet Ahch-To, where he was reunited with his old friend Luke. But the Jedi Master refused to return, leaving Chewie waiting with the Falcon while Rey tried to learn the mysteries of the Force.

When Rey left Ahch-To, Chewie accompanied her. Flying the Falcon, he helped the remnants of the Resistance escape Crait, ensuring the fight for galactic freedom would continue.

On a mission to Pasaana, Chewie was captured by the Knights of Ren and delivered to the First Order. But Poe and Finn rescued him from captivity, and Rey even returned his bowcaster and bandolier.

With the Resistance facing a climactic fight at Exegol, Chewie and Lando set out to rally ordinary galactic citizens to help even up the long odds. Their campaign succeeded, and they brought a citizens’ fleet to the Sith world, helping the Resistance defeat the First Order and its Sith allies. 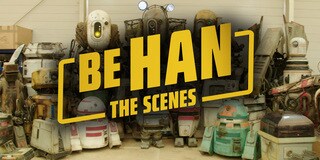 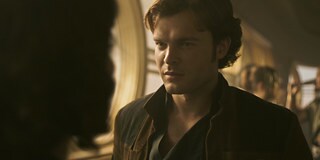 Director Ron Howard and the cast of Solo: A Star Wars Story share exciting new footage and insights into the young scoundrel. 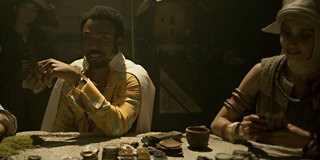 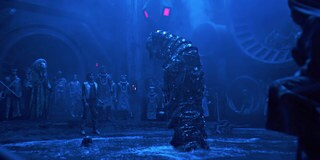 The filmmakers and cast explore the look and feel of the characters, costumes, and environments of Solo: A Star Wars Story. 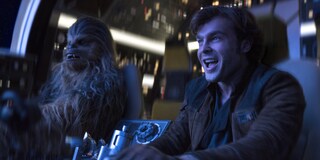 Watch this brand-new clip from Solo: A Star Wars Story. See the film in theaters May 25. 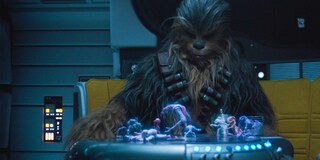 “You can’t wipe them off, they're holograms.” Watch this all-new clip from Solo: A Star Wars story and see the film in theaters May 25. 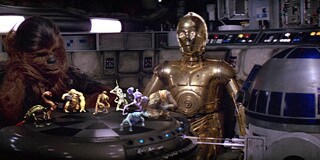 C-3PO and R2-D2 learn an important lesson in how to play holographic chess against Chewbacca.

Chewbacca attempts to rebuild C-3PO after the unfortunate protocol droid was blasted apart by Stormtroopers in Cloud City.

Chewie, Is That You?

Following Han Solo's release from the carbonite block, Jabba sends him to be imprisoned with his old Wookiee pal Chewbacca. 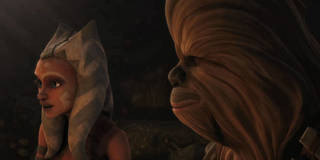 We'll Do It the Wookiee Way

To escape the Trandoshan moon where he and three Jedi younglings are held captive, Chewbacca suggests he build a transmitter from the prison ship's wreckage to call for help. 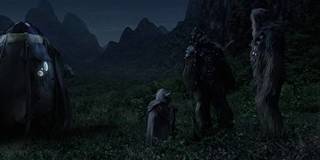 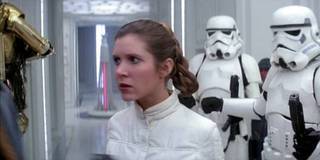 He's Only a Wookiee

On Cloud City, Lando secretly arranges to have Leia and the others freed before they can be taken to Vader's ship. Once the cuffs are off, however, Chewbacca aggressively responds to Lando's betrayal. 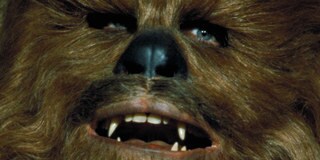 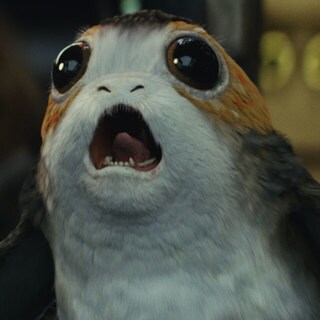