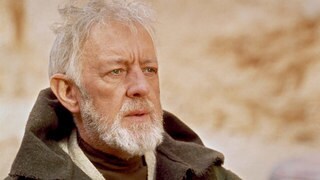 A legendary Jedi Master, Obi-Wan Kenobi was a noble man and gifted in the ways of the Force. He trained Anakin Skywalker, served as a general in the Republic Army during the Clone Wars, and guided Luke Skywalker as a mentor.

A Certain Point of View

Inside his home on Tatooine, Obi-Wan tells Luke about his father, Anakin Skywalker, although his name goes unmentioned. Obi-Wan attributes Anakin's death to a rogue pupil of his, Darth Vader, who betrayed and murdered the young Jedi. 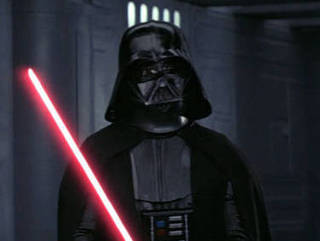 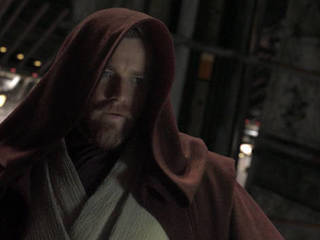 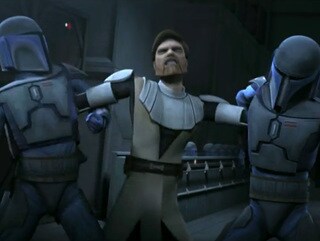 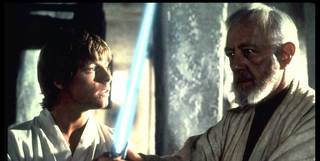 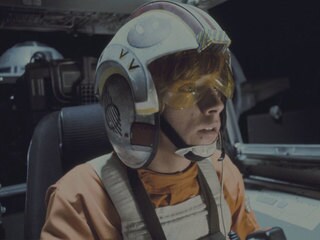 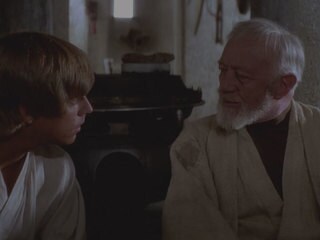 "The Force is what gives a Jedi his power. It's an energy field created by all living things. It surrounds us and penetrates us. It binds the galaxy together." 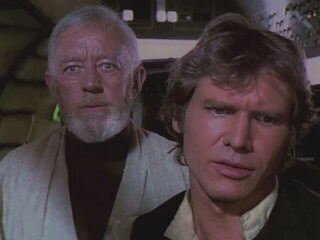 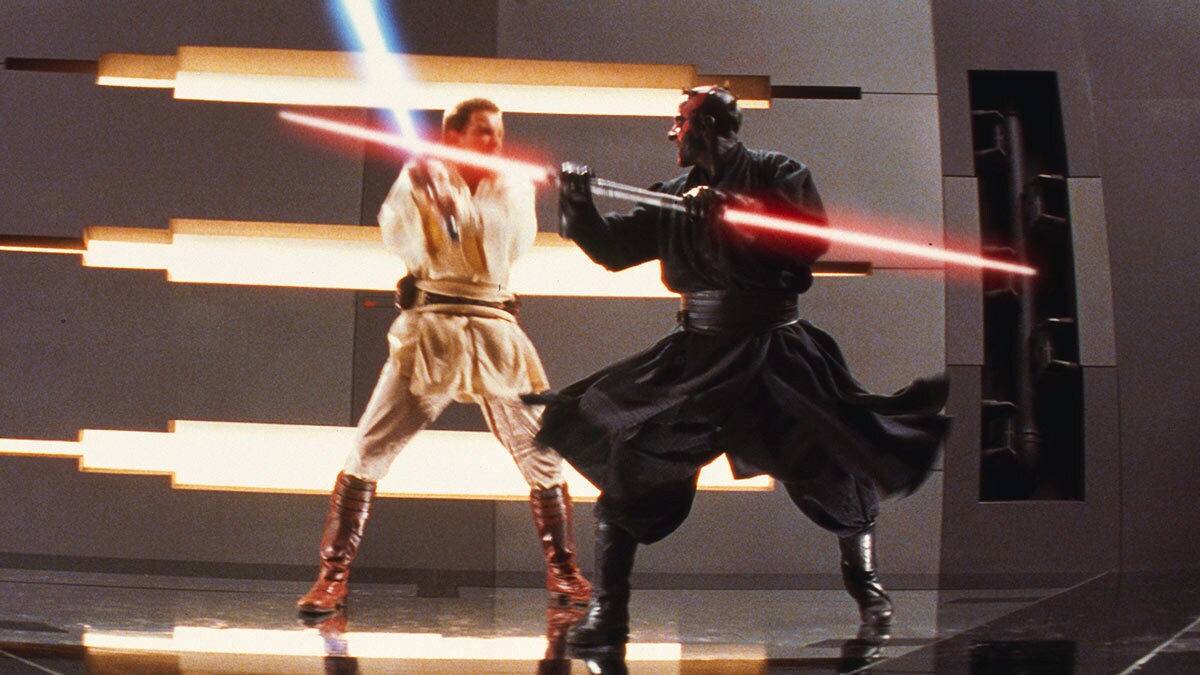 As a Padawan, Obi-Wan Kenobi was the headstrong apprentice to Qui-Gon Jinn. The two were dispatched to settle a dispute between the Trade Federation and the planet Naboo, but negotiations never took place -- the Sith Lord Darth Sidious, orchestrating the Trade Federation’s blockade of the planet, ordered the Jedi killed. Obi-Wan and Qui-Gon survived the trap, however, and fled to the planet’s surface. There, they finally connected with Queen Padmé Amidala of the Naboo, fled the planet, and landed on Tatooine. Qui-Gon and Padmé crossed paths with a young slave boy named Anakin Skywalker who was unusually strong with the Force, helping the stranded heroes pay for starship parts by winning a Podrace. Anakin and Obi-Wan met for the first time after a near-deadly attack by a mysterious dark warrior, and the group headed home to Coruscant. In a surprise move, Queen Amidala decided to go back to Naboo to retake the planet, with Obi-Wan and Qui-Gon escorting her. Little did they know that the dark menace from Tatooine, in truth a Sith named Darth Maul, was awaiting their arrival. The two Jedi dueled Maul in a fast, furious battle, which saw Qui-Gon fatally wounded. Obi-Wan continued the fight, but a Force push left him dangling above a deep shaft. Maul toyed with him, kicking Obi-Wan’s lightsaber into the abyss, but could not anticipate the Jedi’s bold move: he somersaulted over Maul, drew Qui-Gon’s Jedi weapon to his hand, and cut the Sith Lord in two. Kenobi ran to Qui-Gon, who with his dying wish asked Obi-Wan to train Anakin as a Jedi. And so it was: the Council granted Obi-Wan knighthood, and Anakin was named his Padawan. 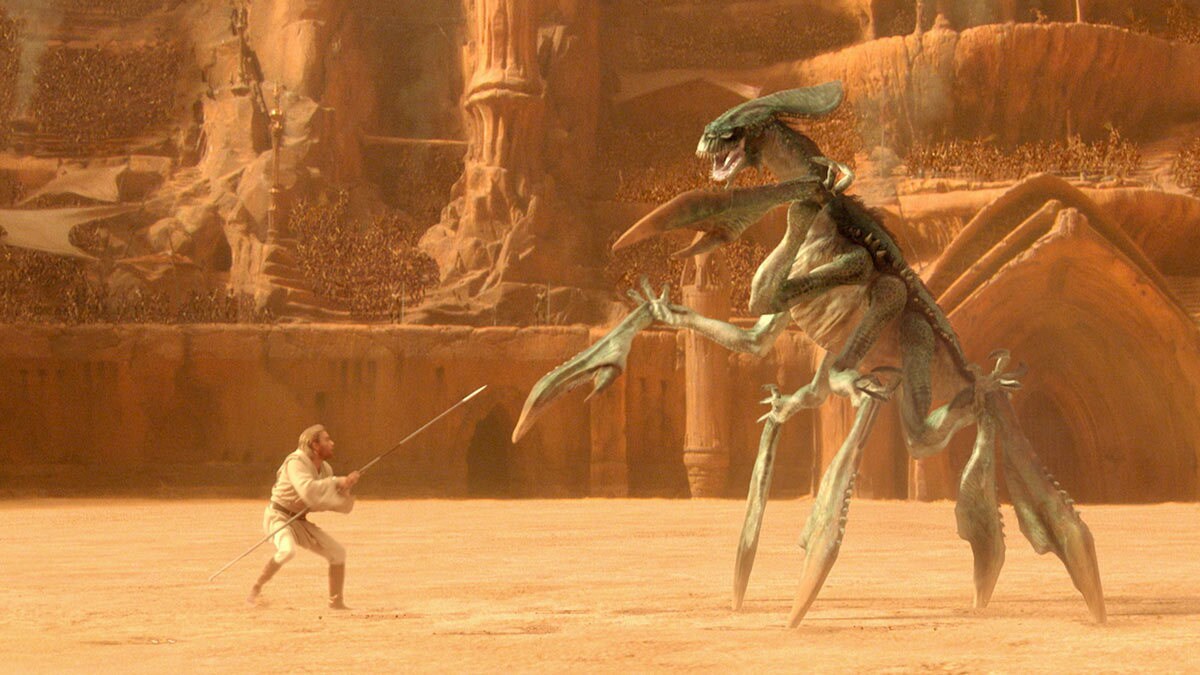 As Obi-Wan Kenobi continued to train Anakin Skywalker, the two were assigned as security for their old friend, Senator Padmé Amidala, after an assassination attempt on her life. After a second attempt, Obi-Wan and Anakin pursued her attacker, a clawdite bounty hunter named Zam Wesell. Following her into one of Coruscant’s seedy bars, Obi-Wan waited until Wesell approached him and severed her hand with a surprise cut from his lightsaber. The Jedi carried the wounded bounty hunter out into the street, where Wesell was mysteriously killed by a poison dart shot from above.

Obi-Wan began an investigation, finding that the dart was from the planet Kamino -- a world which had been mysteriously erased from the Jedi Archives. On Kamino he discovered that a massive clone army had been created for the Republic -- in the name of a Jedi who had been dead for nearly 10 years -- and the genetic blueprint was bounty hunter Jango Fett. Looking to secure Jango, Kenobi battled Fett in the planet’s never-ending rain, with the bounty hunter escaping in his starship. Obi-Wan tracked Fett to Geonosis, where he found Separatist forces had gathered under the leadership of former Jedi Count Dooku. While reporting back to the Jedi, Obi-Wan was ambushed, taken prisoner, and sentenced to die in the Geonosis arena. He survived, killing a vicious acklay, and alongside other Jedi and the new clone army, fought off battle droids as the Clone War erupted around him. He and Anakin then engaged Count Dooku, who had turned to the dark side. Both Jedi suffered injuries in their failure to stop the Separatist leader. 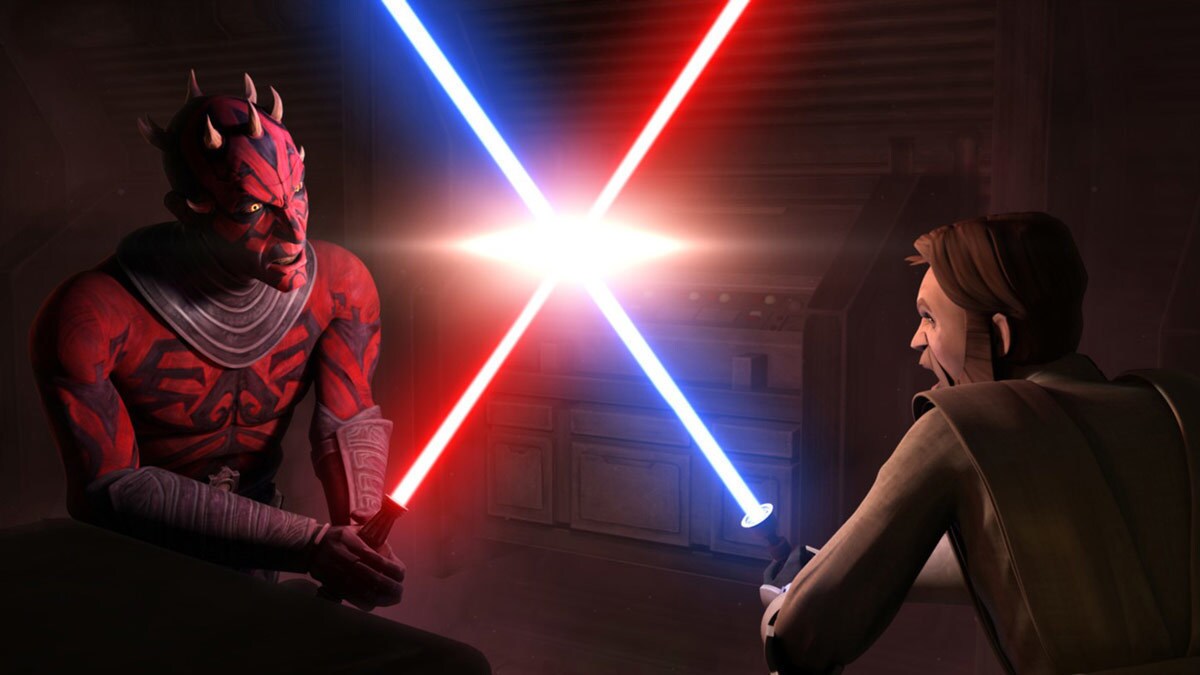 Obi-Wan Kenobi became a general in the Army of the Republic as the Clone Wars continued, having many adventures with Anakin Skywalker. Chief among them was the return of Darth Maul, the Sith Lord who Obi-Wan cut in two on Naboo. Maul wanted vengeance, and battled Obi-Wan on numerous occasions, eventually killing Obi-Wan’s former love Duchess Satine in revenge. Obi-Wan was shattered, but like a true Jedi, did not give in to anger or hate. 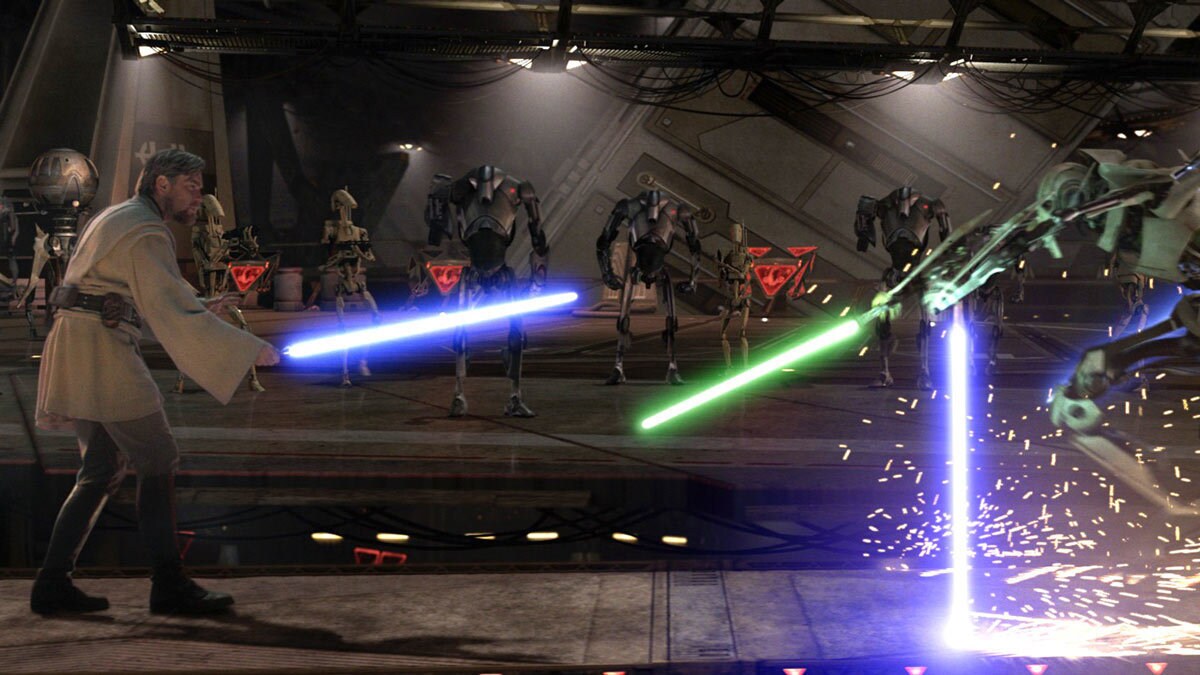 After the Supreme Chancellor was kidnapped by General Grievous, leader of the droid army, Obi-Wan and Anakin led a daring rescue mission. They battled their way to Grievous’ ship, and gained entrance to the control tower where they once again dueled Count Dooku. While Dooku was able to defeat Obi-Wan, nearly killing him, he could not best Anakin. At the urging of Chancellor Palpatine, the young Jedi beheaded the Sith Lord. Anakin carried an unconscious Obi-Wan on his back, and the three returned to Coruscant.

In the galactic capital, the Jedi had become wary of Palpatine. He appointed Anakin to be his representative on the Council, which the Jedi only allowed so that the prophesied Chosen One could secretly report on all the Chancellor’s dealings. It was Obi-Wan who gave Anakin this assignment, and it strained their friendship. Shortly thereafter, Obi-Wan was dispatched to Utapau, where he found General Grievous. The enemies engaged in lightsaber combat and Obi-Wan eventually destroyed the droid army leader with a more “uncivilized” weapon, shooting the Jedi hunter’s organic innards with a blaster pistol. But then, something strange happened. Obi-Wan’s clone troopers betrayed him, opening fire seemingly without cause. The clones had been issued Order 66 -- the extermination of all Jedi -- from the Supreme Chancellor, who in reality was Sith Lord Darth Sidious. Obi-Wan survived, however, and made contact with Yoda, though no other Jedi had reported back. The two returned to Coruscant to jam a signal that was laying a trap for Order 66 survivors, telling all to stay away from the capital. Successful, Obi-Wan looked at a security hologram to see who led the slaughter of Jedi within the Temple; he was overcome with grief and regret to find that it was Anakin, now a dark side convert called Darth Vader.

Yoda assigned Obi-Wan to deal with Anakin, who had left Coruscant for the lava planet Mustafar. Both powerful and evenly matched, the two former friends dueled to a stalemate until Anakin attempted to leap over his old Master, which Obi-Wan warned him not to try. The new Sith, filled with rage and hubris, ignored these pleas; Obi-Wan severed his legs and arm. Heartbroken, Obi-Wan left Anakin to his fate on the banks of a lava river. The Jedi Order vanquished and the galaxy under Sith rule, Obi-Wan, Yoda, and Senator Bail Organa devised a plan: they would split up the children of Anakin and Padmé, who had died in childbirth, and protect them from the Emperor. Bail would adopt the girl, Leia, and raise her as his own; Obi-Wan would take the boy, Luke, to his family on Tatooine, where he would watch over him. When the time was right, he would reveal to Luke his true origins, and train him to be a Jedi. 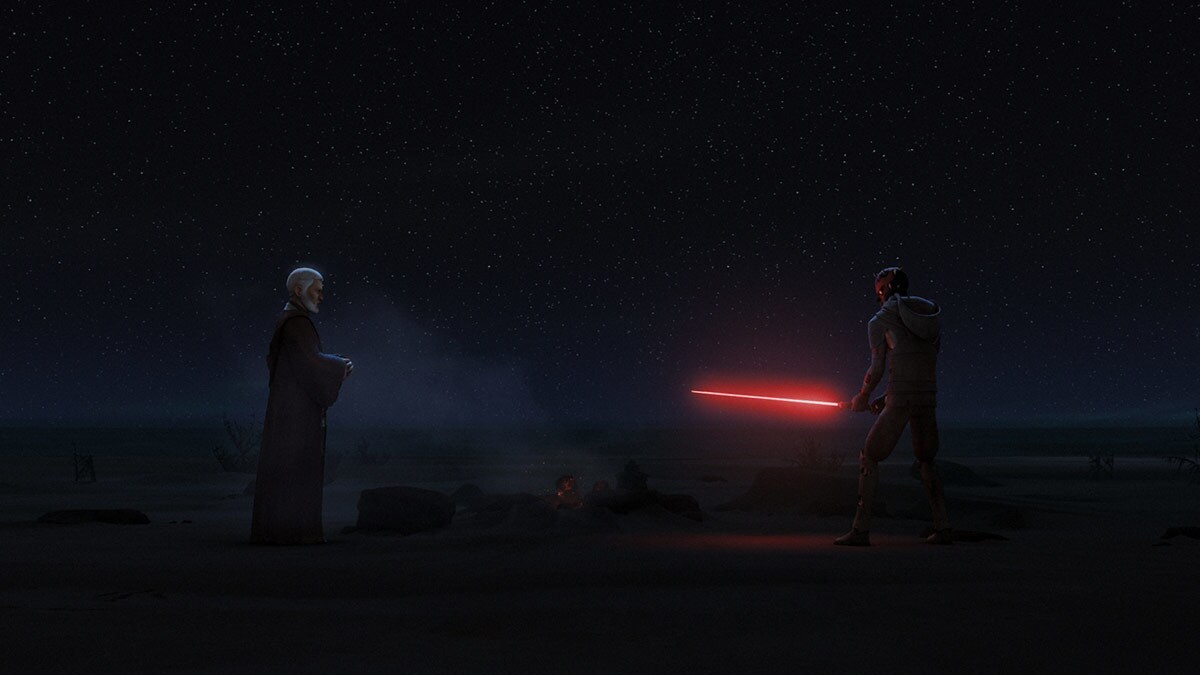 A young Padawan named Ezra Bridger came to Tatooine in search of Obi-Wan, believing he was the key to destroy the Sith. But it was all a ploy by Maul to draw Kenobi out, and it worked. Maul had also come to the desert planet, seeking his final revenge against Kenobi -- the Jedi who bested him and changed his fate so long ago. They dueled in the dead of night, Maul attacking furiously. But it was over quickly, with Obi-Wan delivering one single, fatal strike. The former Sith collapsed, and Obi-Wan cradled Maul as his life slipped away. 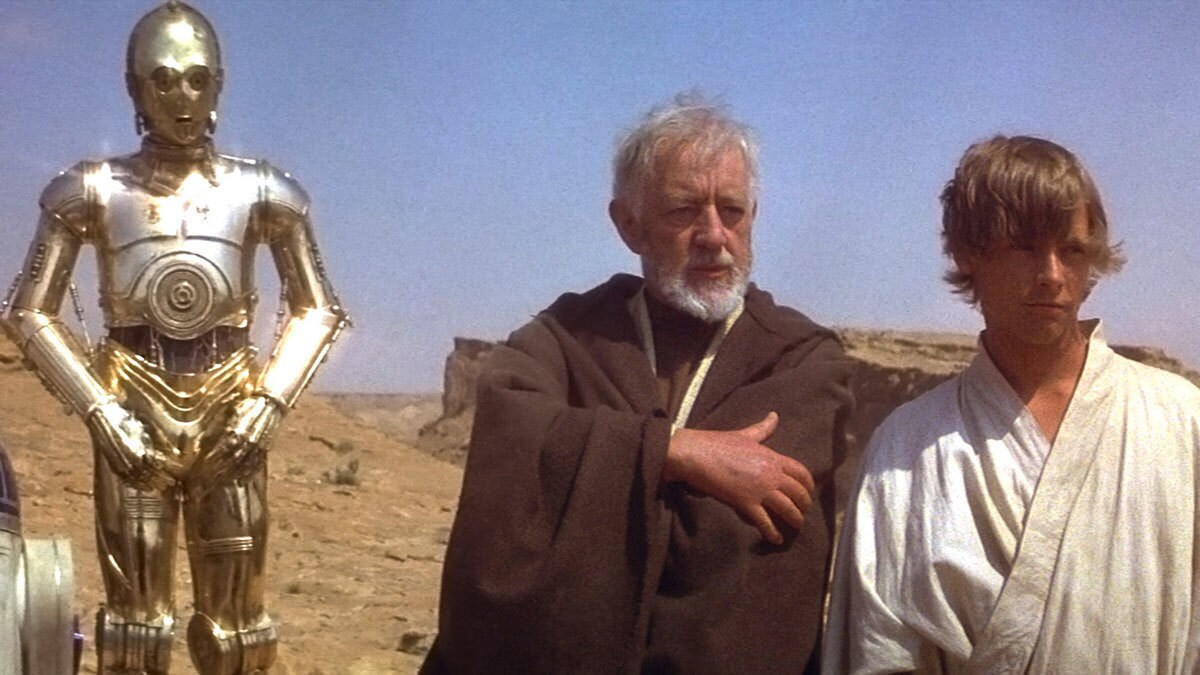 After the Jedi Order was all but eradicated by the Emperor and Darth Vader, Obi-Wan hid on Tatooine, watching over Luke Skywalker and waiting to teach him the ways of the Force. Finally, fate intervened, and Obi-Wan found himself rescuing Luke from Tusken Raiders. Back in his hut, Obi-Wan revealed to Luke that he was friends with the boy’s father, who was also a Jedi Knight -- until Darth Vader, a former Jedi, betrayed and murdered him. Obi-Wan gave Luke his father’s lightsaber, encouraging him to learn about the Force and leave Tatooine. The two then uncovered a hidden message from Princess Leia Organa hidden inside R2-D2, asking Obi-Wan for help. The Jedi Master, Luke, R2-D2, C-3PO, and hired pilots Han Solo and Chewbacca headed for Alderaan, the Princess’ home planet.

On the journey, Obi-Wan began instructing Luke in the ways of the Force and lightsaber combat; upon arrival, they found that Alderaan was gone, destroyed by the Empire’s Death Star. Their ship, the Millennium Falcon, was caught in the space station’s tractor beam, forcing the heroes to board. They evaded capture and found that Leia was held there in a prison cell; Obi-Wan took it upon himself to deactivate the tractor beam, allowing Luke, Han, and Chewbacca to rescue the Princess. The Jedi Master was successful, but then encountered Darth Vader, his former student turned Sith. They dueled, and Obi-Wan willingly accepted his death so that Luke and his allies could escape.

Later, when Luke was piloting an X-wing in the Rebel Alliance’s desperate attempt to destroy the Death Star, the disembodied voice of Obi-Wan spoke to Luke and guided him to use the Force, not his ship’s technology. The young hero delivered an impossibly precise shot into the exhaust port of the doomsday weapon, and the Death Star was no more. “The Force will be with you,” Obi-Wan's voice told Luke. “Always.” 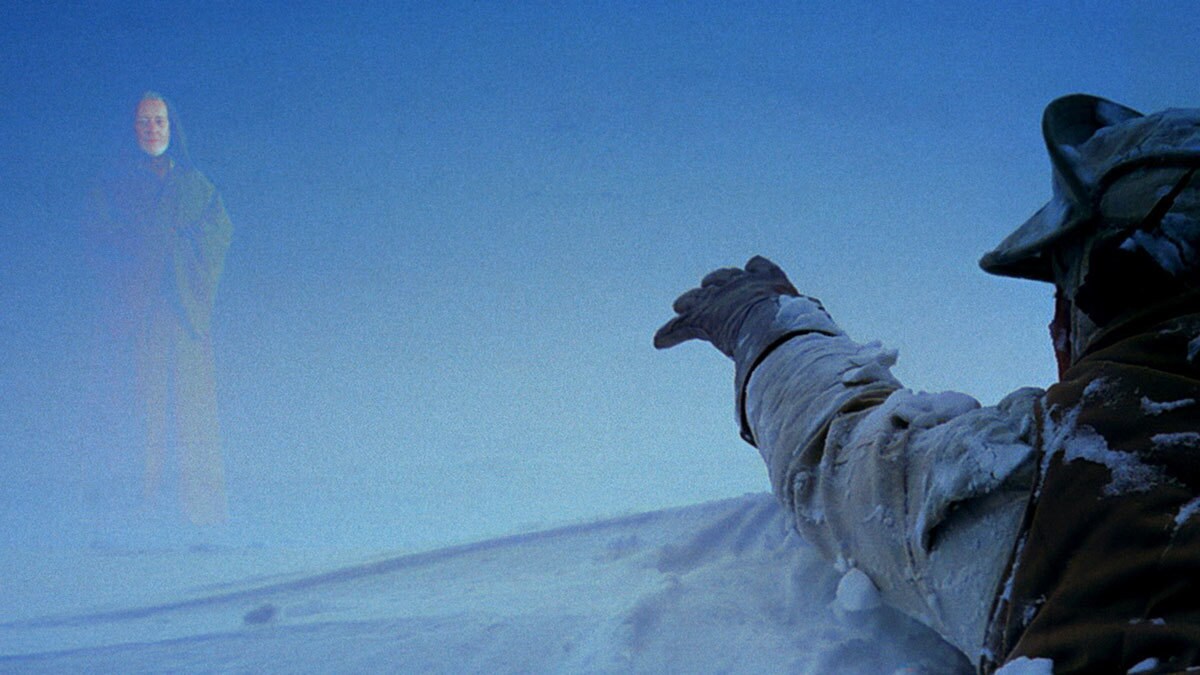 Luke Skywalker became a Rebel hero after the destruction of the Death Star, helping lead the Rebels to their new secret base on the ice planet Hoth. After a savage wampa attack in the freezing cold, Luke was visited by the spectral form of Obi-Wan, who told him to go to Dagobah where he would be trained by a Jedi Master named Yoda. Luke went to the swamp planet, where he continued his Jedi lessons and received guidance from Obi-Wan, who could appear in spirit form through the power of the Force. He encouraged Luke to complete his training before facing Darth Vader, but the brash Jedi would not listen. 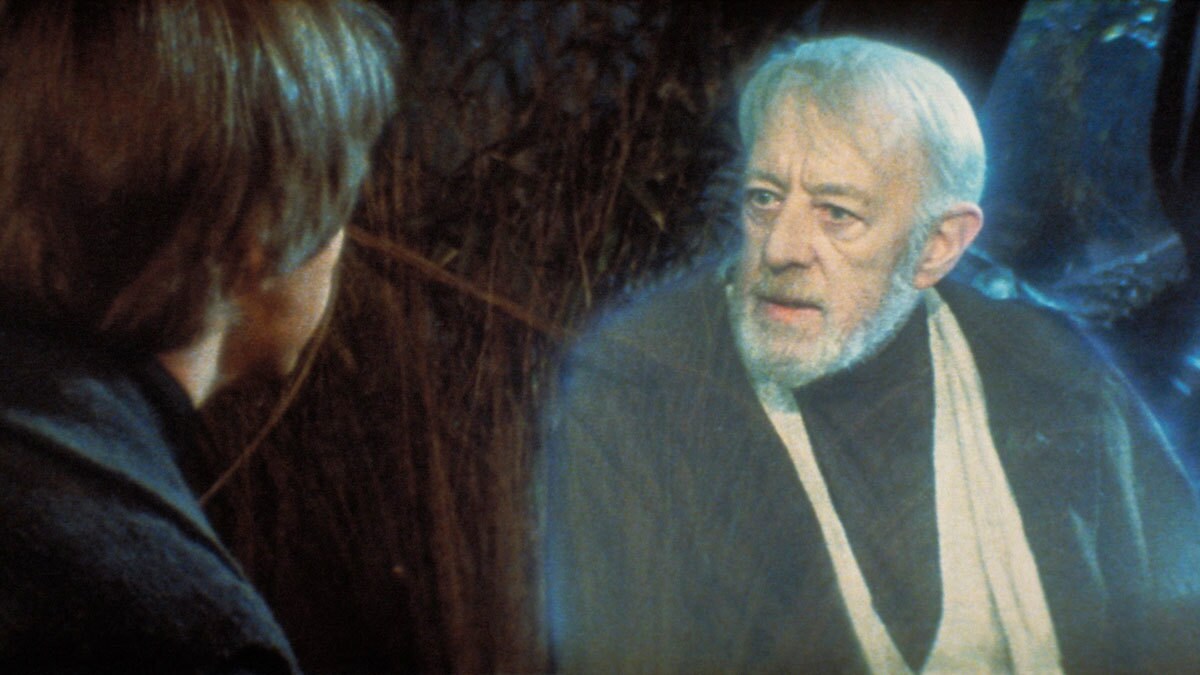 After his defeat by Darth Vader, Luke Skywalker returned to Dagobah to complete his training. The young Jedi had grown powerful, and a dying Yoda told him that his training was complete -- but that he must confront Darth Vader, now revealed to be his father, in order to achieve full knighthood. That was not all; with his last words, the Jedi Master informed his student that there was another Skywalker. A shocked Luke left Yoda’s hut to find Obi-Wan waiting. Obi-Wan explained why he shielded Luke from the truth about his father, and confirmed that the other Skywalker was Leia, his twin sister. He encouraged the young Jedi to face Vader again; Luke would later do so, but on his own terms -- instead of killing his father, he showed him compassion. The good was awakened in the Sith Lord, and he would die not as Vader, but as Anakin Skywalker. In a celebration on Endor, Obi-Wan joined Yoda and Anakin in the Force, proudly watching over Luke.