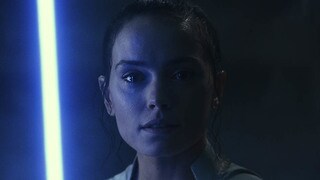 Seemingly abandoned by her parents on Jakku, Rey grew up a scavenger amid the wreckage of war. Her life changed when she agreed to help a droid on an urgent mission for the Resistance. Rey discovered she was powerful in the Force, and sought out the vanished Jedi Master Luke Skywalker to train her. That ended in disappointment, as did her attempt to bring Kylo Ren back to the light. But the resilient Rey continued her training and learned the truth about her parentage and her mysterious connection with Kylo. She then faced her greatest test: a confrontation with fear and evil that would determine the galaxy’s fate. 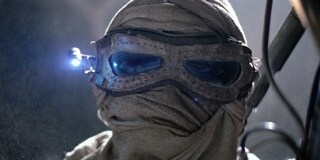 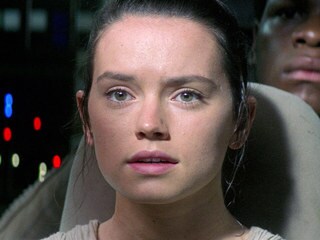 "I didn't know there was this much green in the whole galaxy." 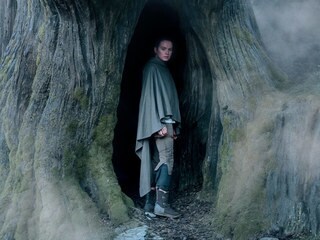 "Something inside me has always been there, but now it's awake and I'm afraid." "You underestimate Skywalker, and Ben Solo. And me. It will be your downfall." 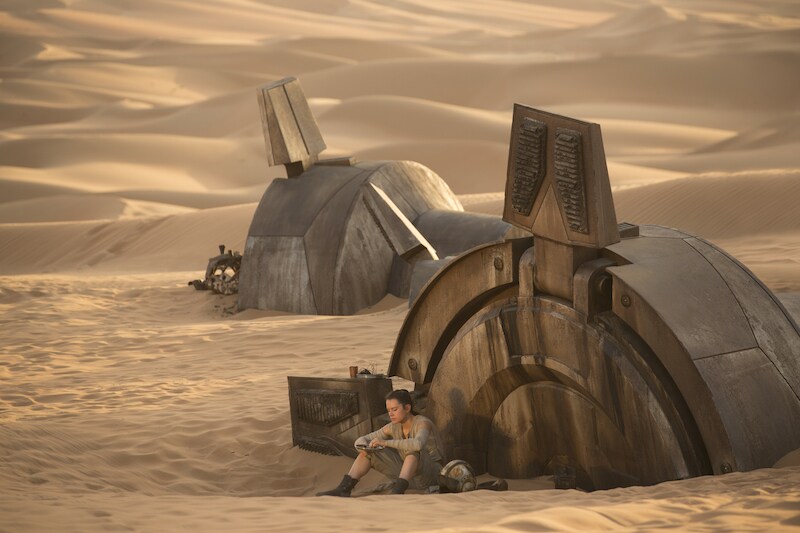 Rey grew up on Jakku, eking out a life as a scavenger and hoping that one day whoever had left her on the barren desert world would return. She learned how to survive, becoming a gifted mechanic, pilot and warrior. But she seemed destined to live out her days on a forlorn backwater world, ignorant of the larger galaxy and its perils and possibilities. 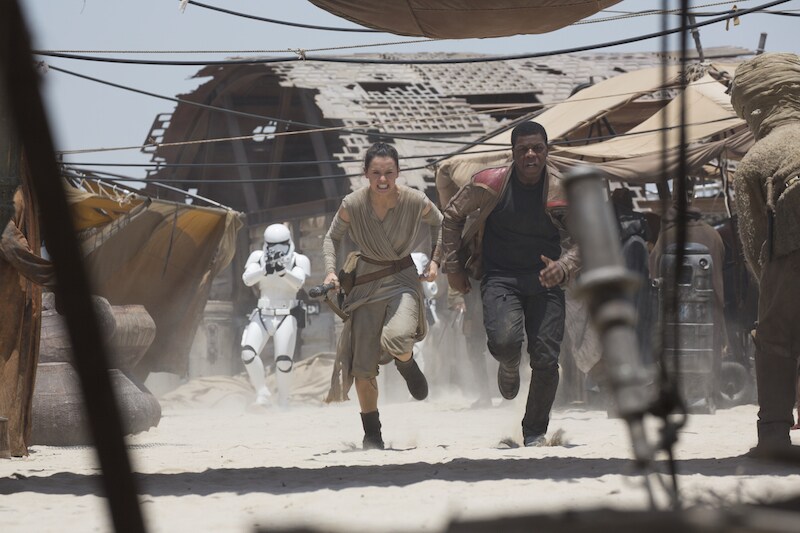 Rey’s life changed when she encountered BB-8, a Resistance astromech carrying a star chart offering a clue to the location of the long-lost Jedi master Luke Skywalker. Rey and the renegade stormtrooper Finn forged an unlikely friendship, escaping Jakku and finding themselves caught in a galactic war – with both of their destinies shaped by the awakened power of the Force.

On Takodana, Skywalker’s lightsaber called to Rey, who experienced a Force vision. She rejected this call to destiny, but was captured by the dark side warrior Kylo Ren, with whom she shared a strange connection. Kylo took Rey to Starkiller Base, where he tried to understand her rapidly growing powers. With Finn in peril, she escaped and took up Skywalker’s lightsaber – and the quest to find the Jedi master.

Rey found Luke on the lost world Ahch-To, but the meeting wasn’t what she had hoped. Luke had exiled himself and refused to teach Rey, insisting that it was time for the Jedi Order to end. Rey stubbornly refused to leave, and eventually Luke agreed to teach her three lessons that would convince her he had made the right decision.

Under Luke’s tutelage, Rey learned to feel the Force around her and understand her connection to it. But as her powers grew, her connection with Kylo strengthened as well – and Rey became certain that their fates were somehow intertwined.

When Luke refused to leave Ahch-To, Rey sought out Kylo, hoping he would turn from the dark side. They joined forces to defeat Supreme Leader Snoke, but Kylo tried to convince Rey to join him in creating a new galactic order. Disillusioned, Rey turned her back on Kylo, using her Force powers to save the Resistance on Crait.

Rey continued to train, learning from both Leia Organa and the Jedi texts she’d taken from Ahch-To. But she was plagued by dark visions of both her past and future, and by the resumption of her mysterious connection with Kylo. Still seeking to turn her to the dark side, Kylo revealed that she was the granddaughter of Emperor Palpatine, and had been hidden away by her parents on Jakku to protect her. 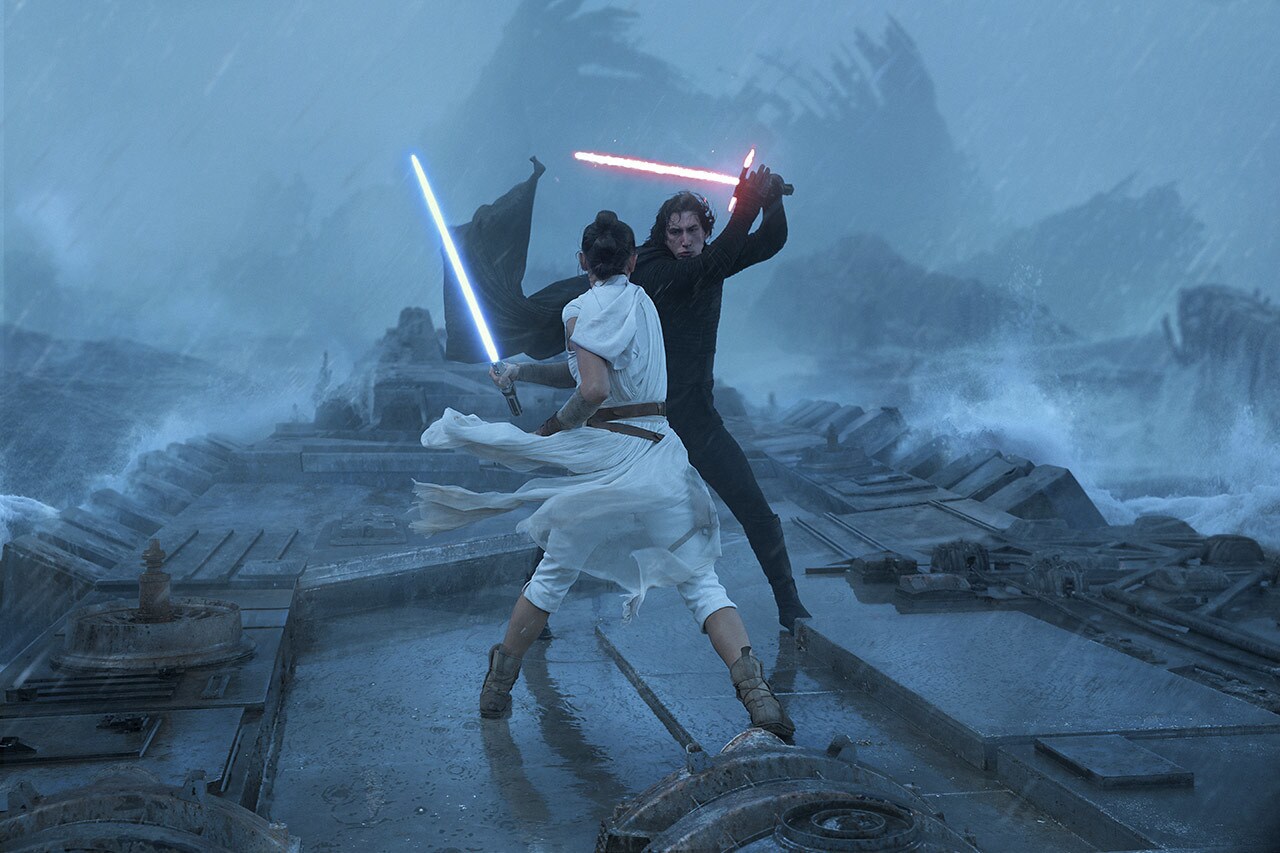 Determined to destroy Palpatine, Rey sought a Sith wayfinder that could guide her to his redoubt on the legendary planet Exegol. She found it amid the Death Star wreckage on Kef Bir, but was confronted by Kylo Ren. Rey’s fear and anger left her susceptible to the lures of the dark side, and she struck Kylo down -- then instinctively healed him with the Force. Despairing about her future, she fled from all he had revealed.

But Luke’s spirit encouraged her to look past the revelation of her bloodline, as he had, and gave her Leia’s lightsaber to wield alongside his own. Rey confronted Palpatine on Exegol, destroying him with the help of the spirits of the Jedi past. The effort took all her strength, but she was saved by Ben Solo, who gave his own life for hers. Rey then traveled to Tatooine to bury the lightsabers of Luke and Leia in tribute to her mentors. Unveiling her own newly constructed Jedi weapon, she took the name Rey Skywalker.