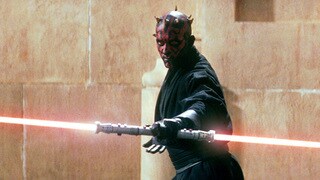 A deadly, agile Sith Lord trained by the evil Darth Sidious, Darth Maul was a formidable warrior and scheming mastermind. He wielded an intimidating double-bladed lightsaber and fought with a menacing ferocity. Though he fell in battle against Obi-Wan Kenobi, the Zabrak from Dathomir would prove to be much harder to destroy than originally believed. 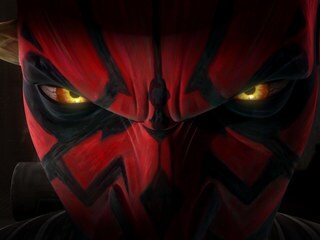 Maul Revels in His Revenge in Star Wars: The Clone Wars – Stories of Light and Dark – Exclusive Audiobook Excerpt

Hear Sam Witwer return as the dark warrior in this chilling audio clip. 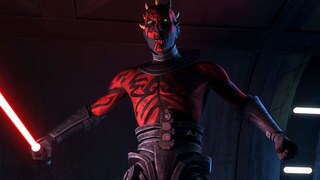 Poll: What is Maul’s Greatest Moment?

Choose from the dark warrior's most epic battles and notorious acts! 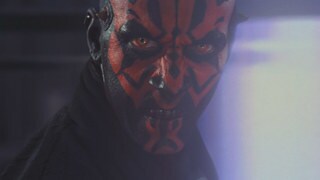 Poll: Who Is More Powerful – Darth Maul or Darth Vader?

Which Sith was stronger with the dark side? 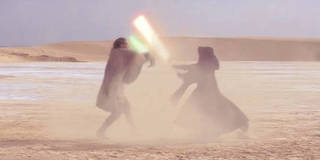 Darth Maul confronts Qui-Gon Jinn as he prepares to leave Tatooine with Anakin, Padme and the others. 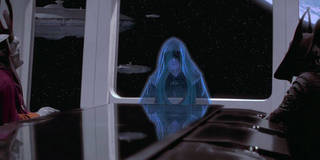 Condemning the Neimoidians' fruitless efforts at capturing Queen Amidala, Darth Sidious resolves to send his apprentice, Darth Maul, to hunt down the leader of Naboo. 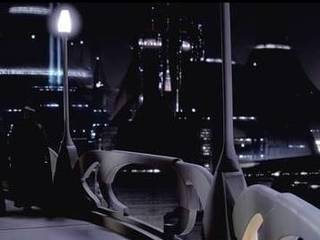 We Will Reveal Ourselves 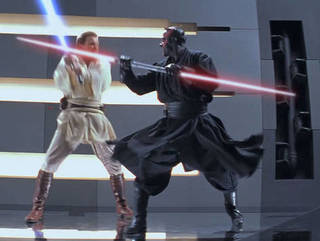 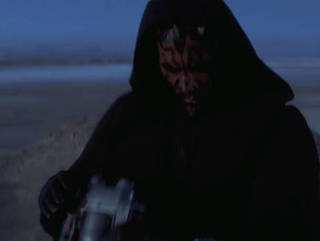 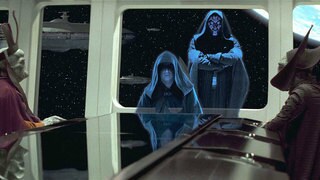 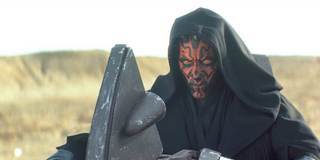 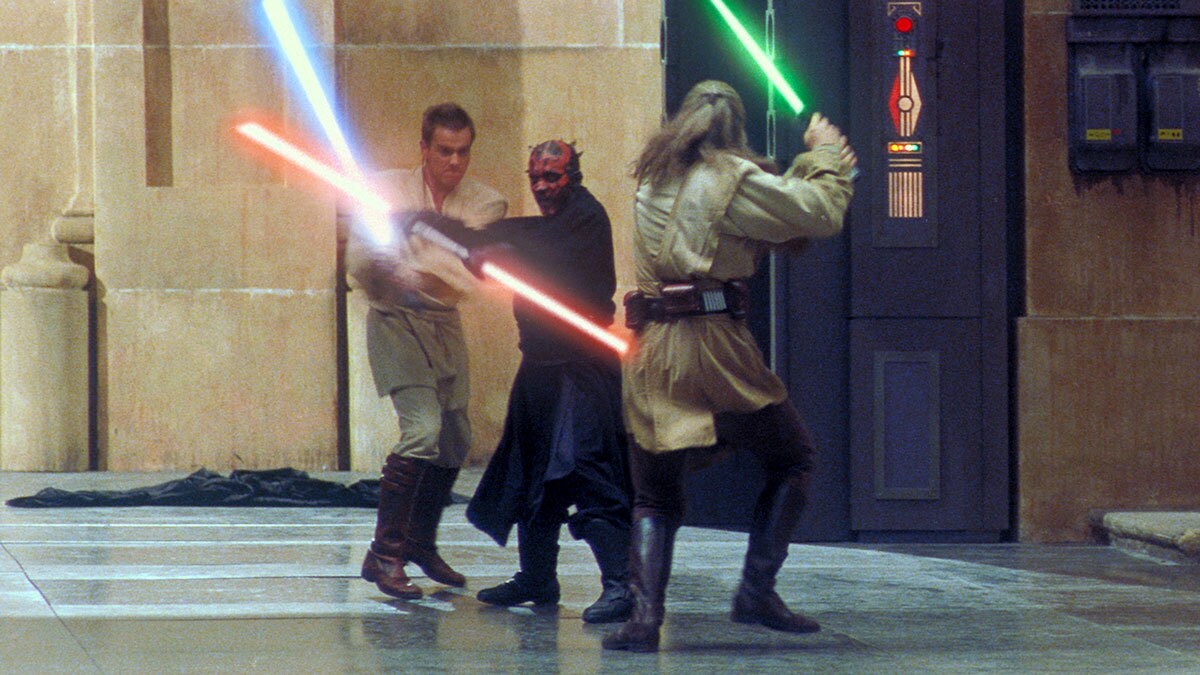 Darth Maul longed for revenge against the Jedi. He was finally unleashed by his Master, Darth Sidious, in an assassination attempt on Queen Amidala on the outskirts of Tatooine. He battled briefly with Qui-Gon Jinn, the Queen’s Jedi escort, but could not reach his target. Later, Maul waited for Amidala on Naboo, where he dueled with Qui-Gon and his apprentice, Obi-Wan Kenobi. The Sith fought with blinding speed and impressive agility, and stabbed Jinn through with his red double-bladed lightsaber; he would prove unable to best Obi-Wan, however. The young Jedi, in a surprising move, cut Maul in two and sent him tumbling down the planet core, seemingly destroyed. 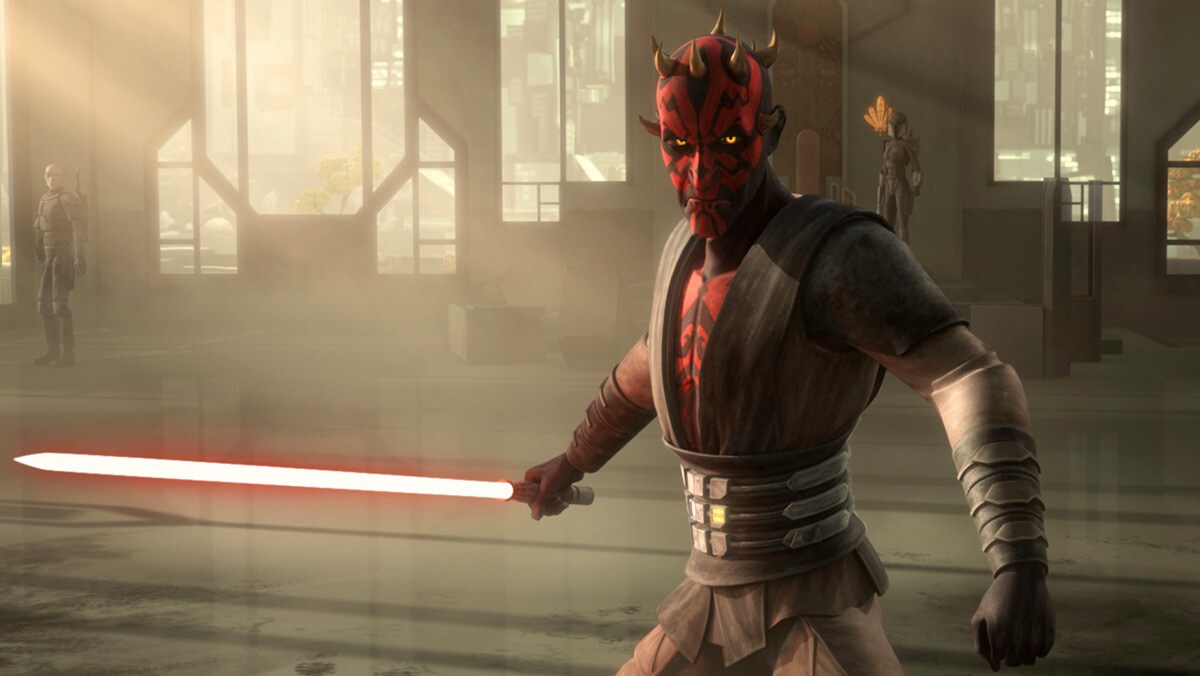 Thought dead, Darth Maul survived his injuries by focusing on his hatred of Obi-Wan Kenobi, the Jedi who cut him in half. His shattered body was dumped amid the refuse of the junk planet Lotho Minor, where the once deadly warrior fell into madness, staying alive on a diet of vermin. When found by his brother Savage Opress, Maul had no memory of who he was, rambled nonsensically, and had built hideous spider-like legs in place of his severed ones.

Opress brought Maul back to his homeworld of Dathomir, where the Nightsister Mother Talzin used dark magicks to restore the fallen Sith’s mind and body. Maul reemerged, took Opress as his apprentice, and became obsessed with Kenobi. He and his brother began terrorizing worlds and allied with Death Watch, Black Sun, and the Pyke syndicate to form the Shadow Collective, a group which took over Mandalore. This led to Maul’s battle with Death Watch leader Pre Vizsla, who he dispatched violently and without mercy to assume total control of the planet. Throughout this time, Maul dueled Obi-Wan Kenobi on numerous occasions, and in an act of pure hatred, killed Obi-Wan’s former love, Duchess Satine Kryze. His revenge would prove double-edged, however, as the act created a dark side ripple sensed by his former Master, Darth Sidious. Sidious came to Mandalore where he declared the Zabrak brothers to be his rivals. The Sith Master killed Savage Opress and took Maul captive -- but not before joyfully torturing his old apprentice with Force lightning.

Later, Maul orchestrated the siege of Mandalore as a means to draw Anakin Skywalker and Obi-Wan Kenobi to him with plans to kill Skywalker and deprive Darth Sidious of his new apprentice. When he was greeted by Ahsoka Tano instead, he made the most of the situation by offering to form an alliance, two outcast apprentices joining forces to put a stop to the creeping evil of the Sith. After clashing lightsabers in the throne room of the capital city, Ahsoka turned Maul's own weapon against him and was able to capture the former Sith Lord for the Republic.

In the custody of Ahsoka Tano and the Republic troops, a Mandalorian vault blunted Maul's Force powers so that he could be delivered to the Jedi Council. But with the execution of Order 66 and the clones onboard turned against Ahsoka Tano, her only recourse was to free the powerful former Sith Lord to create a diversion and give her a chance to save herself and her friend, Rex.

Left to his own devices, Maul used the power of the dark side to rip the hyperdrive from the hurtling cruiser, sending all aboard to certain death when the ship was caught in the gravitational moon. Then he stole the ship Ahsoka Tano had planned to flee in, leaving her to die with the rest of the crew.

But Maul was resilient, and he survived the war to build an empire of his own as the true leader of Crimson Dawn. Operating from his homeworld of Dathomir, Maul commanded the crime syndicate with the help of refined figurehead and terrifying enforcer Dryden Vos, who traversed the galaxy on his lavish yacht entertaining and brutally imposing the will of his master. After his death, Dryden’s first lieutenant Qi’ra assumed control over the territories, working closely with Maul to continue their rule. 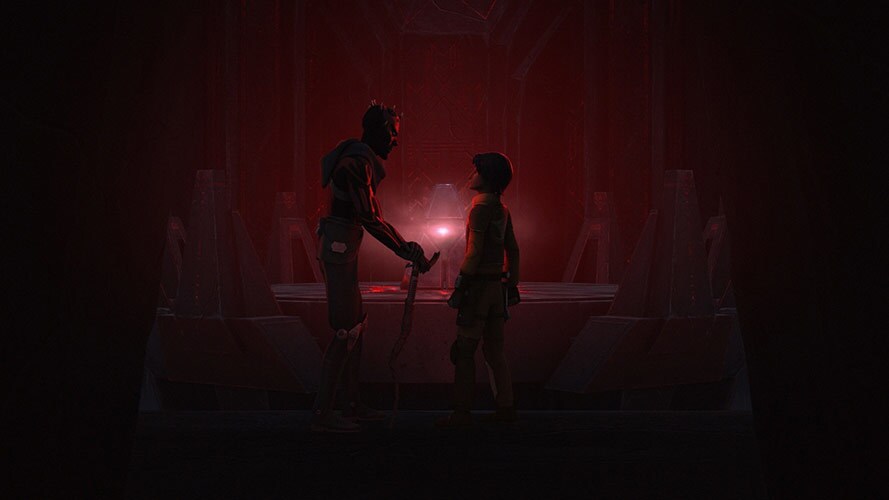 Upon the guidance of Yoda, a young Padawan named Ezra Bridger went to Malachor in search of the power to destroy the Sith. There, he found Maul, who had been stranded on the planet for years. Maul befriended the boy and together they climbed the world's Sith Temple, working in tandem and acquiring a Sith holocron. While Ezra made his way to the top of the Temple, Maul assisted the Padawan's friends, Ahsoka Tano and Kanan Jarrus -- for a time. Eventually, Maul revealed his true motivations. The Temple was, in fact, a battle station, and he would use it for revenge on all his enemies, while making Ezra his new apprentice. Maul took the first opportunity to betray the Jedi, blinding Kanan with a merciless lightsaber strike to the eyes. Kanan was not killed, however, and returned to fight Maul off. The Zabrak escaped the planet in a stolen Inquisitor ship, readying his next move. 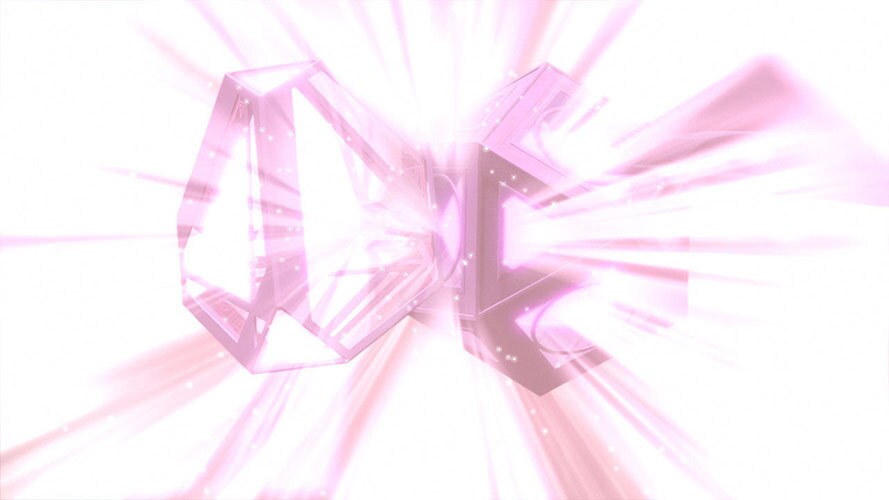 Maul was not finished with Ezra. He returned, tracking the Padawan and his rebel friends to their ship, the Ghost. Maul took the crew hostage, forcing Bridger to unlock and combine his Jedi holocron with the Sith artifact recovered on Malachor. Both saw visions as a result of the ritual, including a planet with twin suns. Following the rite, Maul absconded to his ship, muttering "He lives!" in delirious excitement. 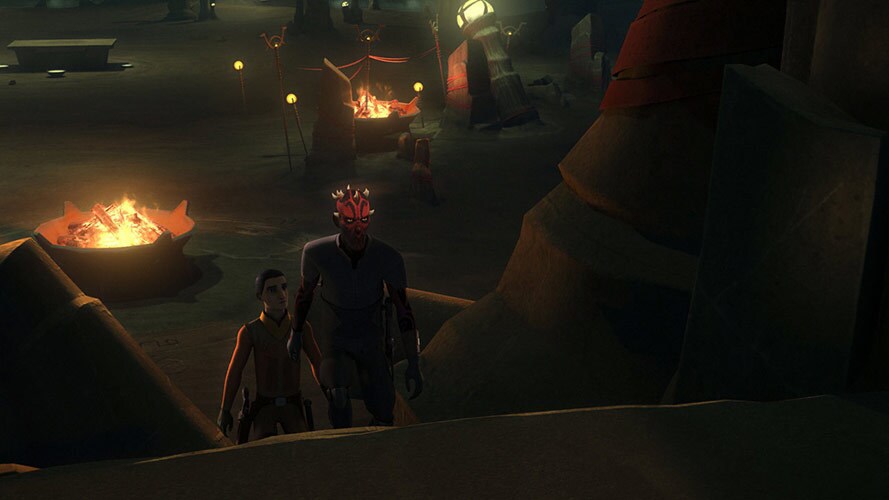 As a result of the ritual, Maul and Ezra became psychically linked. Ezra suffered aural hallucinations and saw visions of Maul, almost killing a rebel officer during one imagined attack. It was prophetic, however, as Maul had arrived at the rebel base on Atollon. He came to recruit the Padawan for another ritual, one that would finally reveal the answers they seek. Begrudgingly, the boy and his friends went with Maul to Dathomir, where Nightsister magick gifted them the knowledge that Obi-Wan Kenobi was alive, and he was on Tatooine. 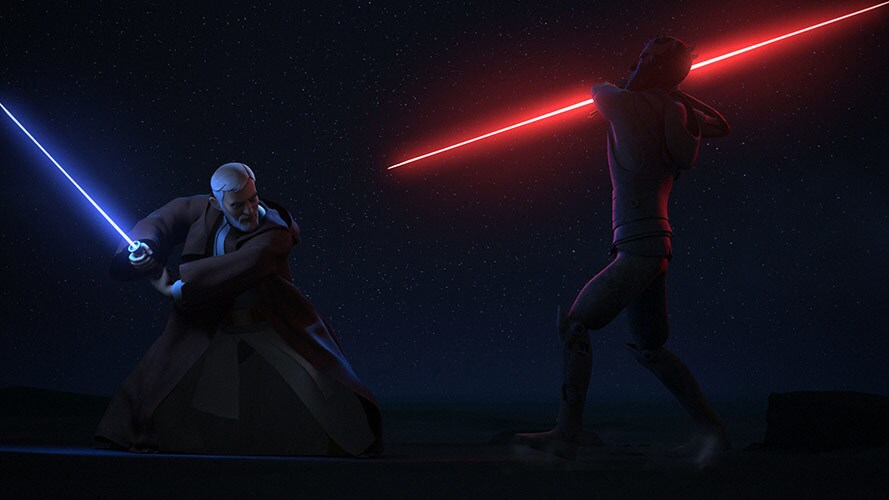 Finally, Maul was close to his revenge. He went to Tatooine in search of Kenobi, but wandered the sands hopelessly. Then the answer came to him: he would use Bridger to draw Kenobi out. Maul manipulated Bridger into coming to Tatooine, subtley directing Ezra into the path of Tusken Raiders and the furthest reaches of Tatooine desert. Indeed, Kenobi found the boy, and in turn, Maul found Kenobi. He confronted the Jedi Master in the dead of night, ready for his final revenge. Kenobi sent Bridger away with directions to return home -- he would deal with Maul.

Quickly, Maul deduced that Obi-Wan would not be hiding on this planet for no reason; no, he was protecting something -- or someone. With this, Kenobi readied his defenses. Maul, double-bladed lightsaber in hand, charged. He delivered two quick strikes, which Kenobi met, returning his attack only once. It was enough. Maul's weapon was cut in two, as was his chest. He fell, caught by the Jedi before he hit the cold night sands. Obi-Wan cradled Maul in his final moments. "Is it the Chosen One?" Maul asked. "He is," Kenobi replied. Maul looked up, the life fading from his eyes, and uttered his last words. "He will avenge us." 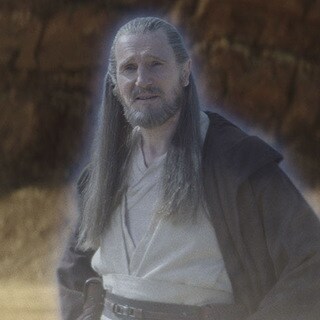 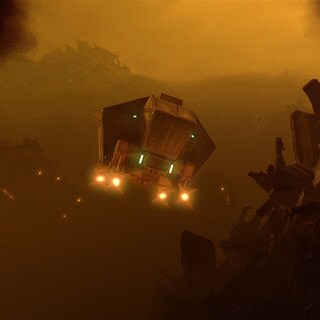 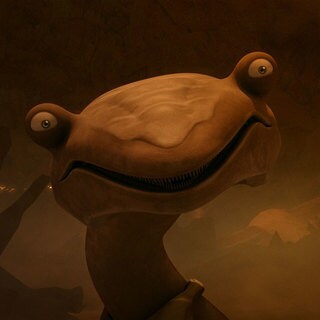