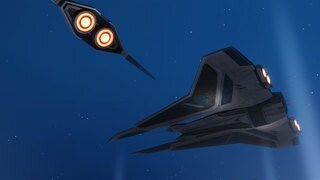 Part of Pre Vizsla's arsenal were Gauntlet starfighters -- sleek combat ships that also served as troop transports. A Gauntlet has a sleek primary hull flanked by large pivoting wings that contain the ship's drives. The wings are on a collared mount, which can rotate independently from the hull, offering the ship remarkable maneuverability for a ship of its size. Within the hull is a drop-seat bay where 24 armored Death Watch troopers can egress via jetpack as the Gauntlet provides air support. The ship is armed with two forward laser cannons, and a pair of rearward facing cannons that flank its boarding tube.