Some of the best Star Wars, Lucasfilm, and ILM factoids from the documentary series, now streaming on Disney+.

You’ve heard the phrase “the magic of moviemaking” so many times that you probably never stop to think about it. But the special effects wizards in Light & Magic, now streaming on Disney+, will absolutely convince you that magic is real. From designing and building the cameras used to film Star Wars from scratch, to merging practical and computer special effects, to pioneering digital filmmaking, the impact that Industrial Light & Magic (ILM) has had on filmmaking is staggering. Here are 20 things we learned about ILM and Star Wars in this compelling documentary series. 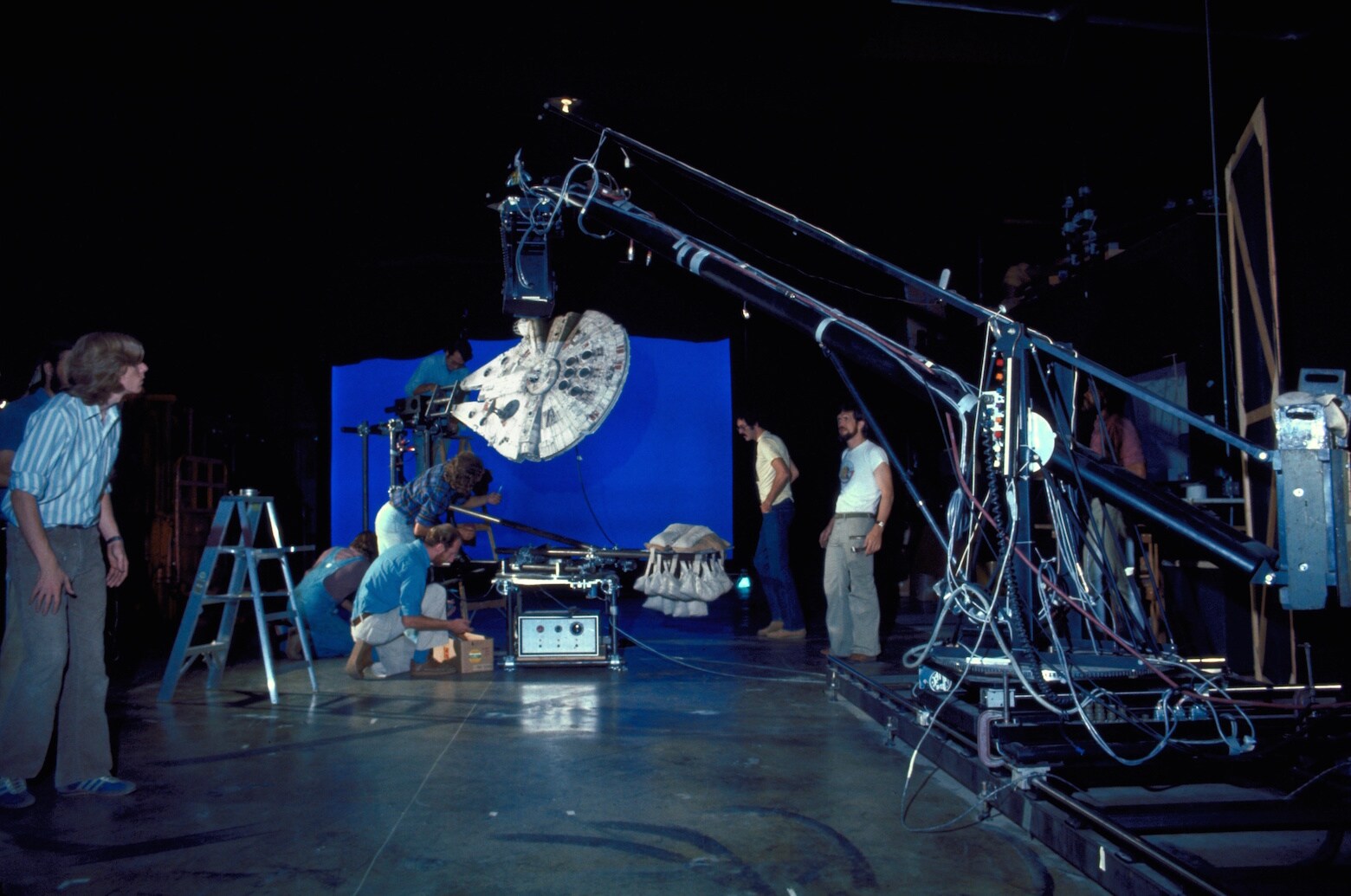 1. ILM was built from the ground up, including the cameras used for Star Wars.

“I realized I was going to have to start a company and put together a whole group of people that would just be specifically for making Star Wars,” said George Lucas in 1979. It started with John Dykstra, who had worked previously in effects for a sci-fi movie, and his network of effects aficionados became some of the first ILM crew. They crafted everything from the ship models to the motion-control camera system used to shoot them in a sweltering warehouse in Van Nuys, California.

2. The original Star Wars effects crew shared a common movie in their origin story: The 7th Voyage of Sinbad. 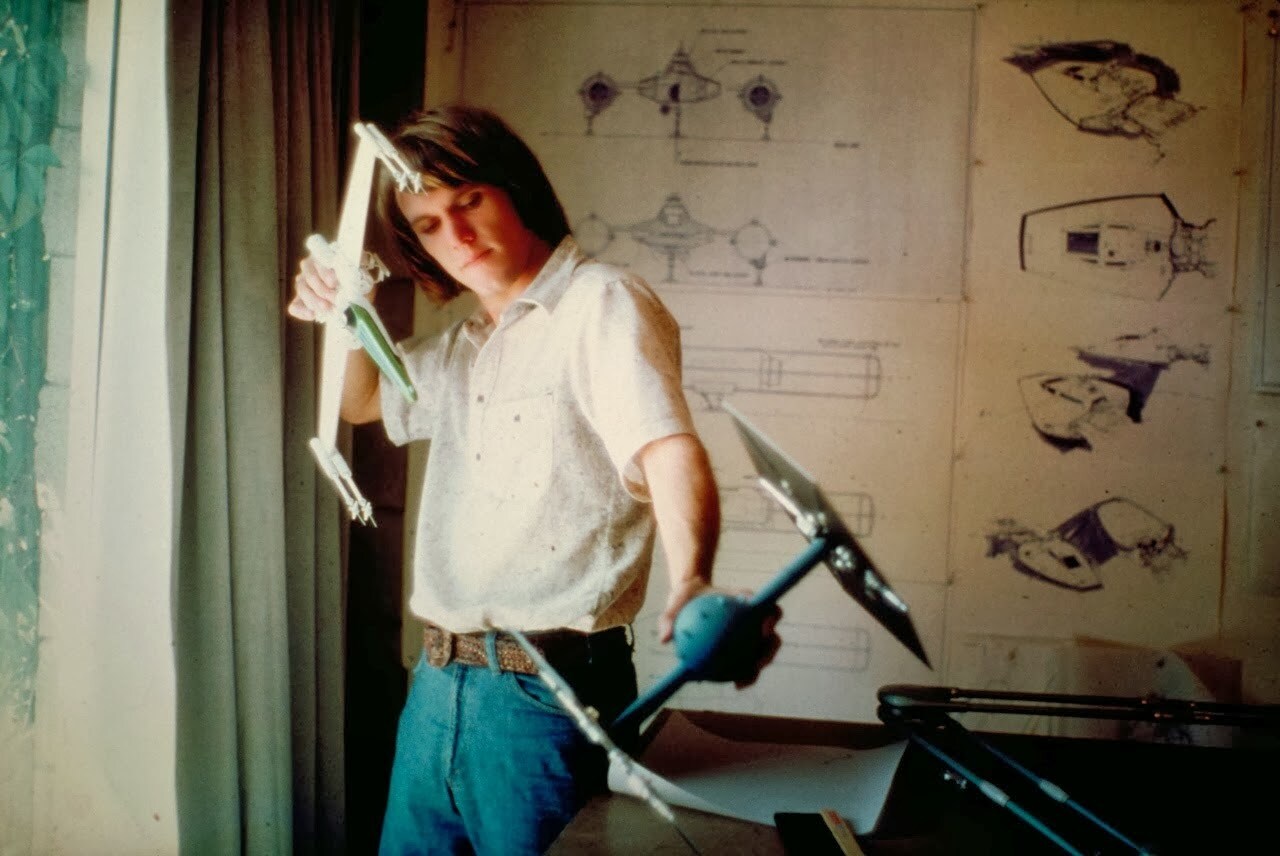 4. Joe Johnston was inspired by dirty dishes when designing the Millennium Falcon.

Johnston was also tasked with redesigning the Falcon when the original design was deemed too similar to another ship on television. Under pressure and mentally blocked, Johnston was sitting in the kitchen when he spotted plates on the counter. He imagined sandwiching two together like hamburger buns to create a saucer-like ship. The Millennium Falcon started to take shape.

5. The first concept for Star Wars was a science fiction serial like Flash Gordon or Buck Rogers combined with the effects of 2001: A Space Odyssey.

After the success of American Graffiti, Lucas turned his attention to an entirely different idea. Mixing the advanced special effects facilitated by Stanley Kubrick and the adventure of classic sci-fi movie serials intrigued him. “That was about all I had,” Lucas recalls in Light & Magic. “I was just searching for a story.”

6. George Lucas relaxed by gluing pieces on some of the ship models.

The making of Star Wars: A New Hope was so stressful that it took a toll on George Lucas mentally and physically. He found his happy place in the model shop. “Some of the times he was happiest was when he would go into the model shop and glue parts on a spaceship,” says Johnston. “He really loved to do that.”

7. The creatures in the cantina and Jabba’s palace were often performed by their creators, including Phil Tippett.

Phil Tippett and Jon Berg weren’t just the co-creators of the creepy aliens in the cantina; they were sometimes the creatures themselves. “George put us in our own masks and the costume department would dress us up,” Tippett says in the documentary. He even climbed into the Max Rebo puppet to do a little dance during the production of Star Wars: Return of the Jedi. 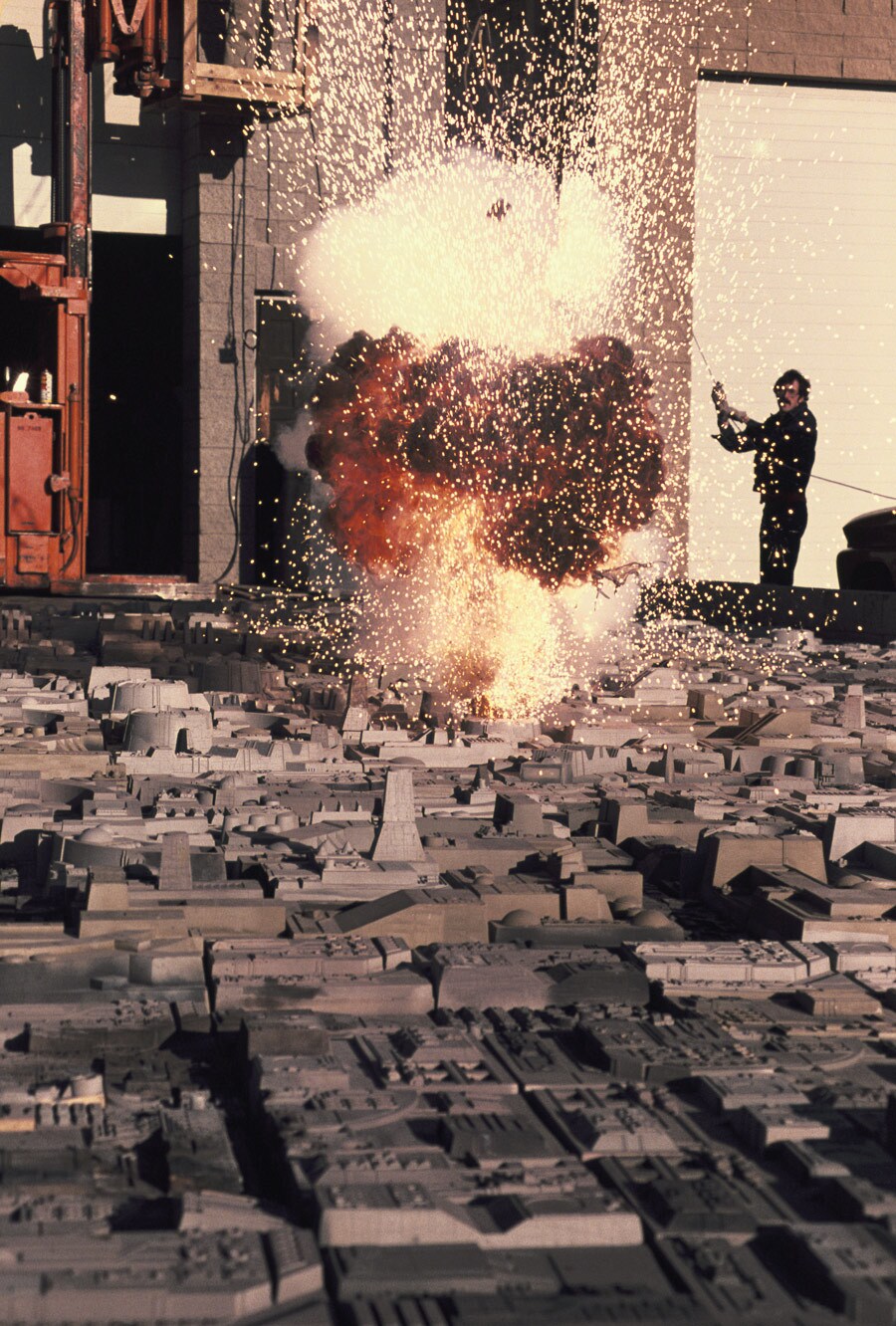 8. Part of the Death Star trench run was filmed in the ILM parking lot.

A vital scene in the action-packed space battle at the end of A New Hope was shot in the back of a pickup truck in a sunny concrete lot -- and you can see it for yourself in Light & Magic. The camera had to be moving at 20 miles an hour, John Dysktra remembers, and the explosion was set off as the truck drove by.

9. ILM moved to the San Francisco area on Kerner Blvd., which inspired the codename for the company.

After the success of Star Wars, Lucas moved Industrial Light & Magic to Marin County in California. The sign on the door read “The Kerner Company,” the public-facing name used for the company. If you listen closely in Light & Magic, veterans of filmmaking like Steven Spielberg sometimes refer to ILM as “Kerner” while sharing their memories.

10. The Battle of Hoth was inspired in part by a Russian film, Alexander Nevsky.

Alexander Nevsky was a Russian film released in 1938. The black-and-white historical drama included an infantry battle on an icy plain, and Lucas took it to Johnston for inspiration for creating the Battle of Hoth. “I remember him distinctly saying, ‘I don’t want it to look like this. I want it to feel like this,’” says Johnston. 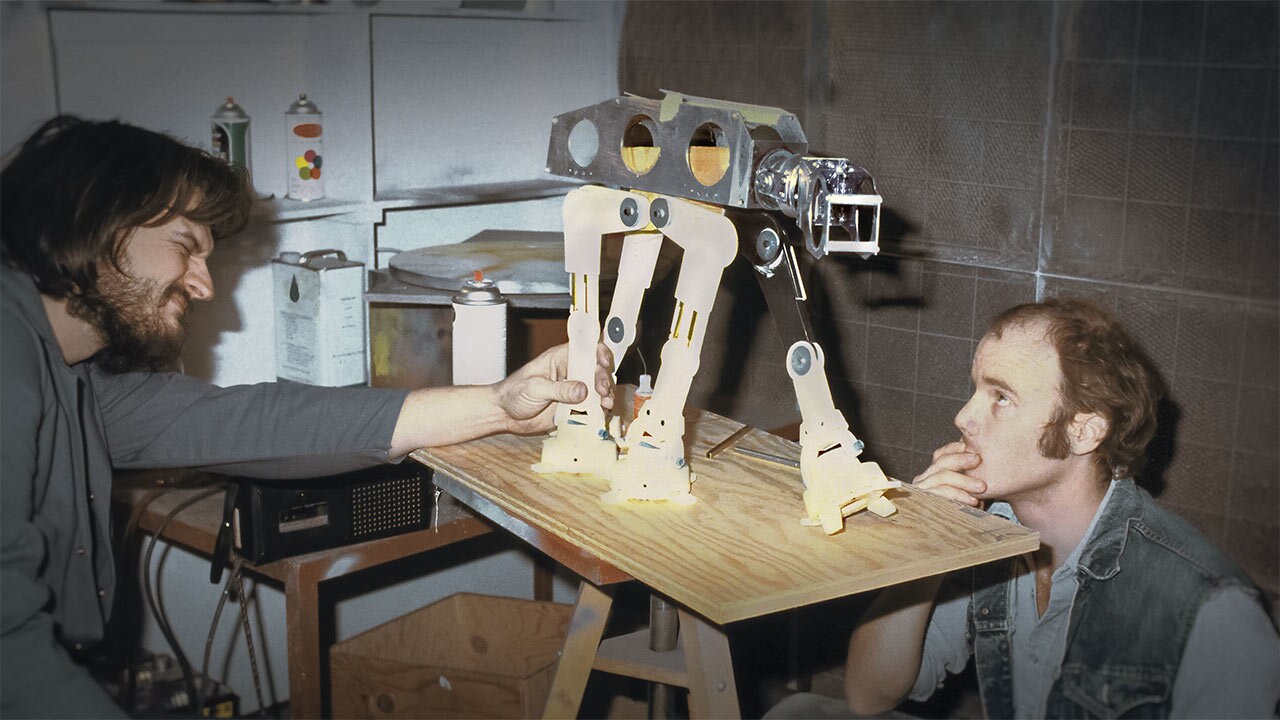 11. One of the models for the AT-AT was a prehistoric animal, the baluchitherium.

You might know that the gait of the Imperial walker was based on elephants, but did you know its look came from a prehistoric mammal? The long-necked baluchitherium was “the conceptual model for the thing,” Tippett says.

12. George Lucas envisioned the future of digital filmmaking during the production of Star Wars: The Empire Strikes Back.

3-D computer graphics were in their nascency in 1979. Ed Catmull, who would go on to co-found the Lucasfilm Computer Division, remembers hearing around that time that the company was interested in the technology for filmmaking. “[Lucas] said he wanted digital audio,” Catmull says in Light & Magic. “He wanted video editing. And he wanted some digital imaging for compositing. George just believed that the world was changing and technology would change everything… And he was willing to put the money behind it.”

13. Yes, there are potatoes in the asteroid field in The Empire Strikes Back, which saved both time and money.

The team at ILM using a potato or two in the asteroid field has long been a Star Wars legend, and visual effects supervisor Ken Ralston confirms it’s true. “Not only is it funny,” he says, “but it keeps you thinking about what’s the best, fastest, cheapest way to do this. You know, it’s every producer’s dream.”

14. Ken Ralston’s tennis shoe appears in Return of the Jedi.

Potatoes weren’t the only oddities floating in space. Ralston recalls that his sneaker made it into a shot of the Mon Calamari cruiser and the rebel fleet. “Along with some yogurt containers and some wads of gum,” he says with a laugh, “that represent fleets of ships in the background.” 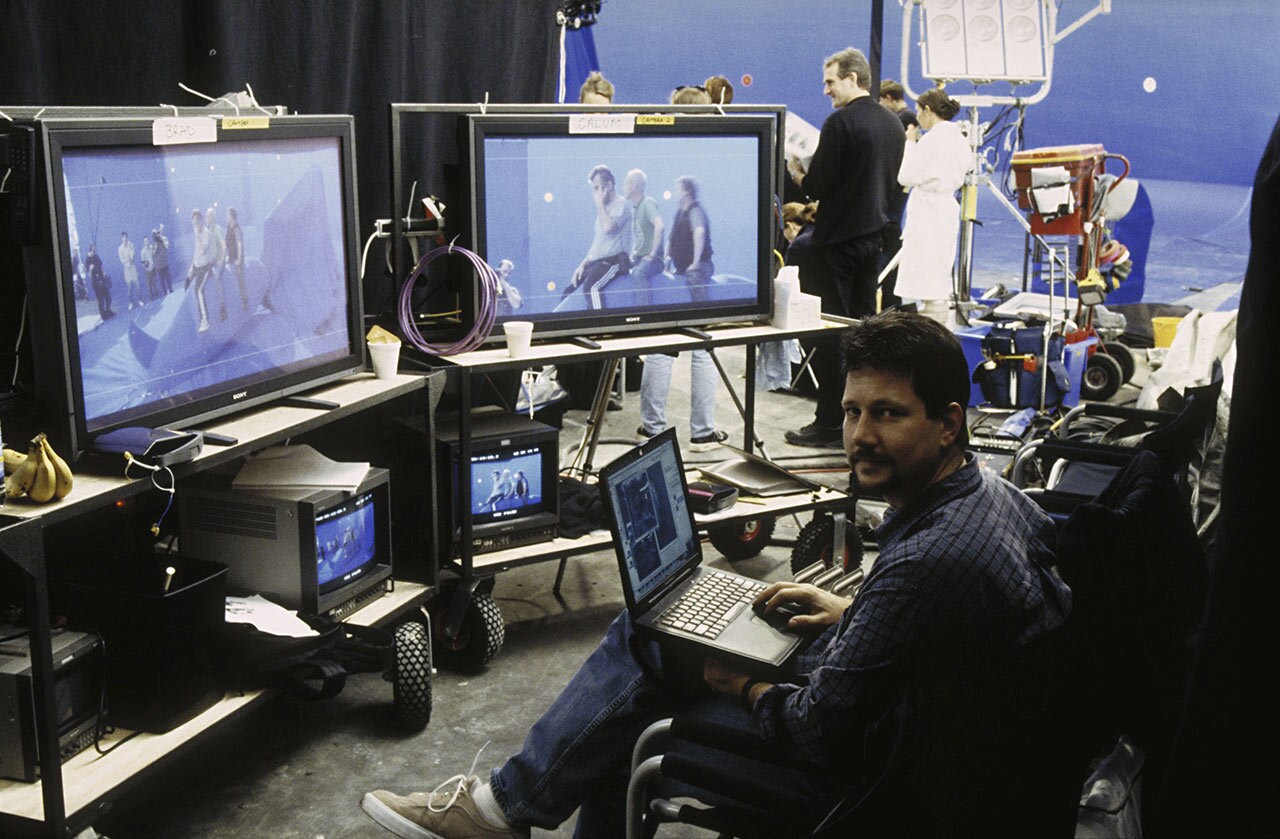 15. John Knoll toured ILM as a teenager long before he would be hired there.

John Knoll tagged along with his father on a business trip to California in 1978. While the teenaged movie fan was in his hotel room, he found ILM in the phone book and gave them a call. They graciously invited him to see the office in Van Nuys, and his dad drove him there the next day. Knoll spent the day touring ILM with modelmaker Lorne Peterson as his guide.

16. The Lucasfilm Computer Division built one of the first computer-based editing systems, EditDroid, which would eventually be adapted into the industry mainstay Avid.

The manual editing process of cutting and piecing together film was a longtime thorn in George Lucas’ side. He insisted as early as the filming of the original trilogy that there had to be a better way to edit. It took Lucasfilm less than 10 years to develop the initial version of this technology, dubbed the EditDroid. “George knew [nonlinear editing] was going to happen and that technology was going to take us to that,” says producer Frank Marshall. 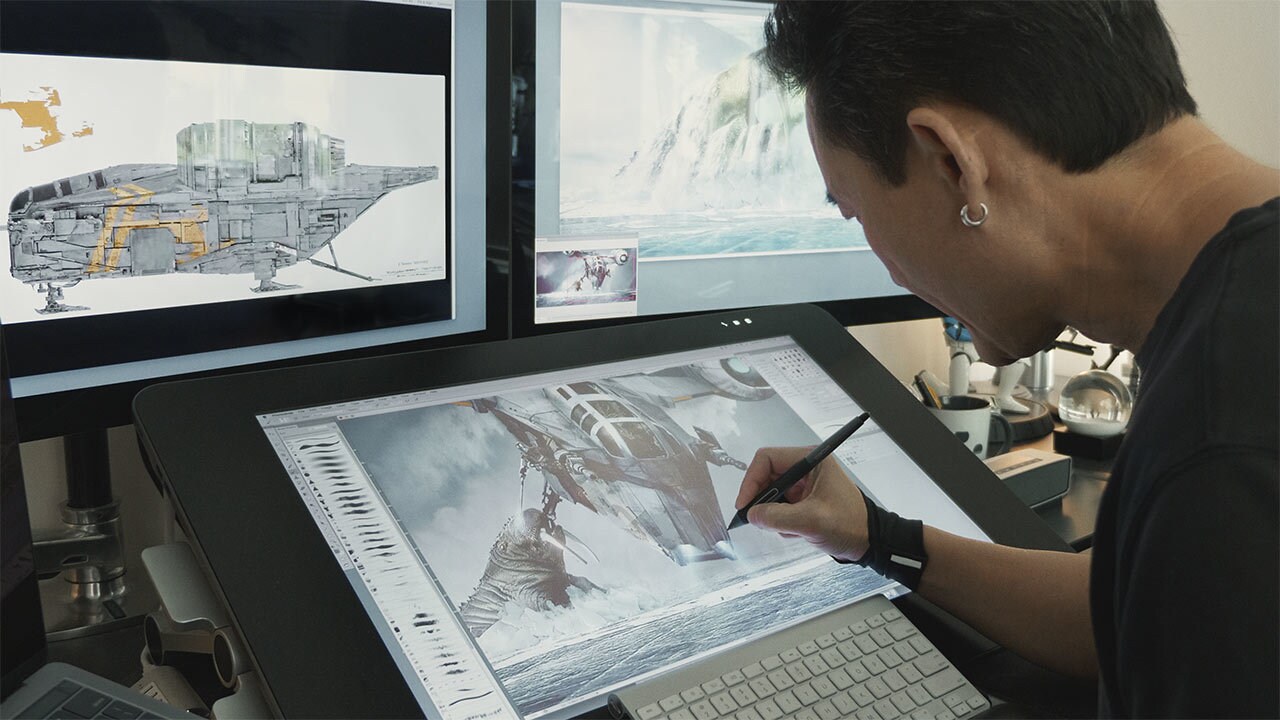 John realized that not everyone could afford a powerful computer like ILM’s Pixar for digital images, and chatted with his programmer brother Thomas about an imaging application that could run on a Macintosh. Thomas wrote a program that would simply display the picture on a personal computer. John suggested additional editing features. “One thing led to another,” John says, “and it turned into Photoshop.”

Knoll recounts the early production meetings for Episode I were daunting, to say the least. “3,600 storyboards,” he says with a laugh, “and almost every board there was something that we had never done before.” Lucas also remembers those first meetings, and there’s an unmistakable twinkle in his eye as he talks about working with Knoll on The Phantom Menace. 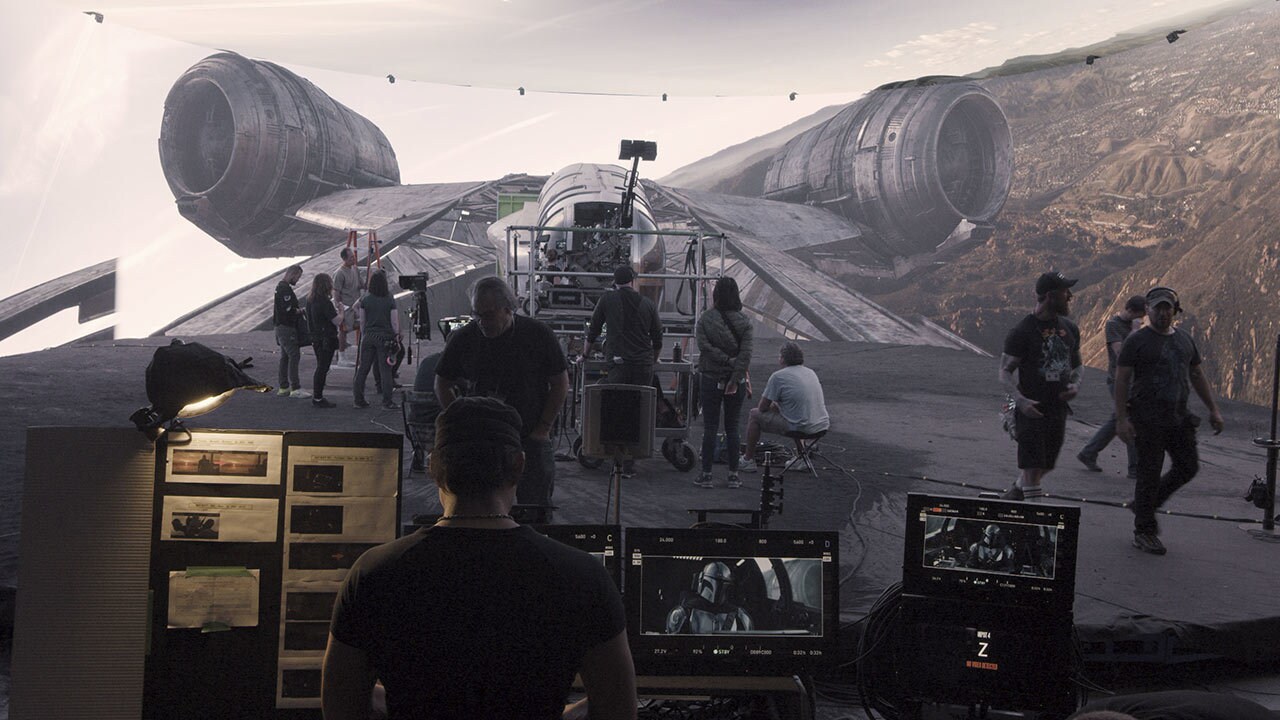 If you watched Disney Gallery, you may already be familiar with the digital set known as "the StageCraft volume." Light & Magic explores the groundbreaking technology even further thanks to ILM and The Mandalorian creator Jon Favreau. (The camera tracking alone is fascinating.) Combined with set pieces and props, the volume is practically indistinguishable from reality when seen on film. “Half the set might be made practically, real props on the set,” says visual effects supervisor Rob Bredow.

Current Star Wars productions are now a blend of everything ILM has excelled at since its inception. Physical, handcrafted models are scanned into the computer and projected on the LED screens in the volume. When the Razor Crest model was created, John Knoll couldn’t resist setting up a motion-control camera system for a flyby shot that echoed ILM’s work in the days of A New Hope. “We didn’t ask him to build a rig!” says Jon Favreau. “He starts doing it like he’s in the AV club, in the basement of ILM.”

Kelly Knox writes features and DIYs for StarWars.com. She’s the author of Be More Obi-Wan and co-author of Star Wars Everyday. Follow her on Twitter at @kelly_knox to talk Star Wars, pop culture, and bad jokes.