Star Wars at 40 | Much to Learn You Still Have: 9 Things You Might Not Know About the Aliens of Star Wars: A New Hope

Your ultimate guide to the fantastically quirky yet previously obscure creatures of the cantina!

Star Wars: A New Hope is where it all started. For the franchise, for the fresh-faced actors, but most importantly to this column, the aliens. I remember watching A New Hope for the first time and having to pause the movie several times. “Who was that guy?” “Who was THAT guy?” “Whoa!” The Mos Eisley cantina scene is a treasure trove of amazing background creatures. Most of these guys don’t have enough of a story for an entire feature, so here’s some intel on a few of my favorites. 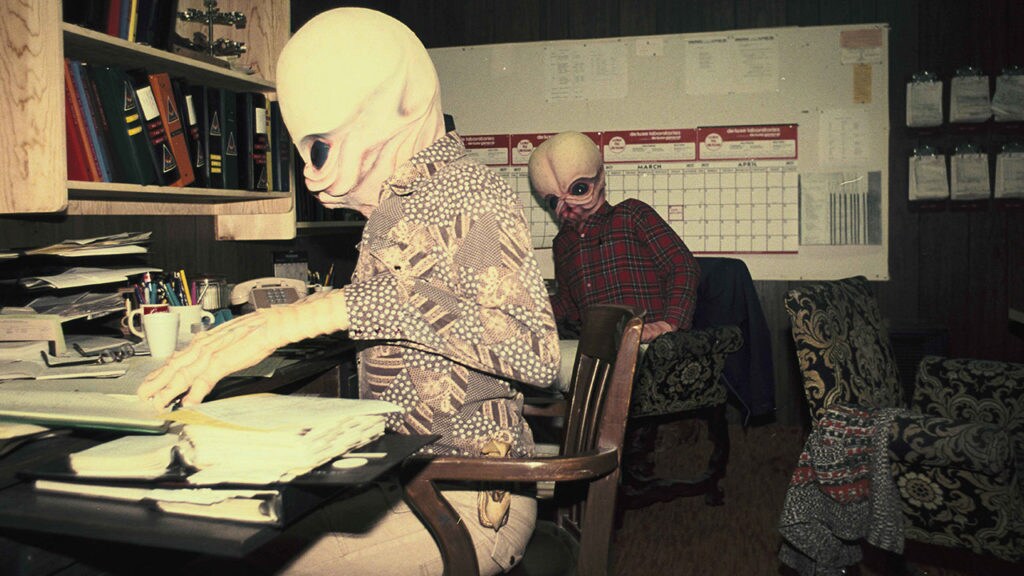 When I think about the cantina, I immediately think of Figrin D’an and the Modal Nodes bopping to their number one hit, “Mad About Me.” Yep, that’s actually what the cantina song is called in-universe. It’s canon. Now that the song is playing in your head, let’s dig into the details about the band. If you don’t already know, the band is made up of seven Bith...from the planet Bith. Rick Baker sketched the original design for the melon-headed musicians and Doug Beswick sculpted a single head and then cast multiple copies. The original concept art shows the aliens with mouths on their necks and their faces. The cantina band members were portrayed by Phil Tippett, Jon Berg, Rob Bottin, and a few other ILM employees. George Lucas suggested the Benny Goodman tune “Sing, Sing, Sing” for the group to jam out to, and despite only having a small air hole to breathe from, they made it work.

Phil Tippett has been responsible for a number of pretty cool Star Wars aliens, but none take the cake for gross factor quite like the alien known as “drooling arm puppet.” Now officially named Dice Ibegon of the Lamproid species, the creature is quite literally just an arm protruding from a cantina table -- or at least that’s what made the final cut. When Tippett conceived of the idea to add a creature that would be more than just a man in a suit, he originally planned to have it spewing goo. Lucas questioned the goo at first, checking with Gary Kurtz on the film’s rating, but ultimately let Tippett give it a try. When the camera rolled, makeup artist Laine Liska used a plunger full of the red monster mucous to send it spewing out quickly on Lucas’ command, but in the end it was just too messy. As Tippett remembers, the goo grossed everyone out a little too much.

I know a lot of Star Wars fans with a deep love for Ponda Baba, or as he was referred to in the original script, “creature.” The Aqualish with a temper as fiery as his jacket recently made a cameo in Rogue One with his dear friend and fellow spice smuggler Dr. Evazan. We all know Ponda’s sad fate, but did you know that memorable day in the cantina was initially going to be much worse for Walrus Man? In an early cut of the scene, Ponda Baba loses his entire head to Obi-Wan’s lightsaber! It was eventually ditched for the more PG version, but ILM’s Lorne Peterson attempted to keep the creepiness by rigging the arm so it would twitch on the ground. Sadly, that was also nixed. 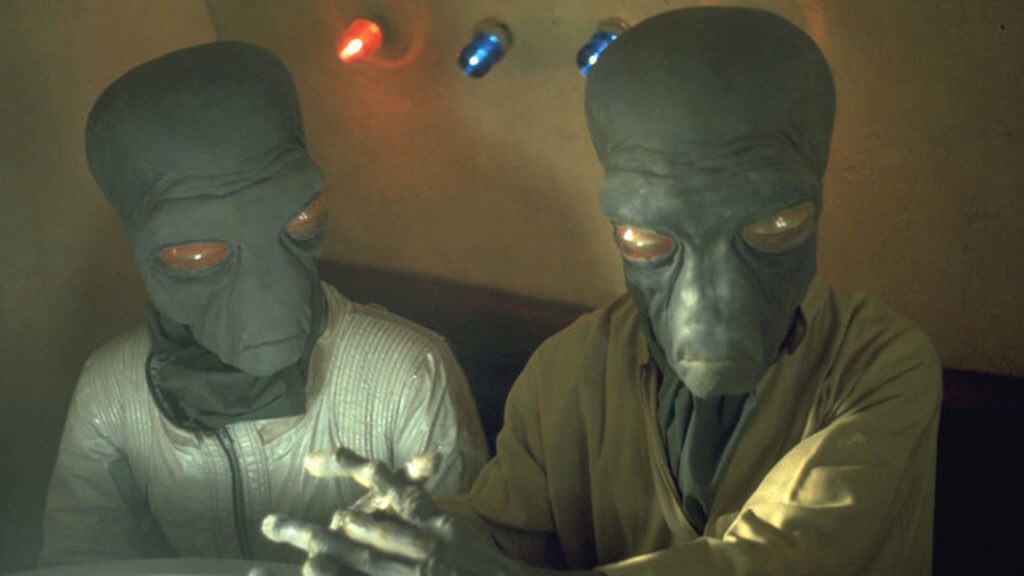 The bald-headed, blue-green alien pair in the cantina that most closely resemble the old-school, stereotypical “alien look” are known as Duros. They weren't always Duros, of course. On set they were simply called "Goggle-Eyes." The Clone Wars would later bring Duros to the forefront with the crafty Cad Bane, but until then their only canonical appearance was in the Mos Eisley cantina. One of the Duros seen having a heated discussion when Luke scans the room from the bar is named Ohwun De Maal, and out of the two, he’s the one wearing the nifty silver spacesuit. The history of De Maal’s suit is an interesting one. Back at Star Wars Celebration VI in 2012, Pablo Hidalgo and Tom Spina revealed in their panel that the suit was actually a studio hand-me-down. You can see the sweet silver ensemble in Planet of the Apes, the Get Smart television show, and a Jerry Lewis movie. 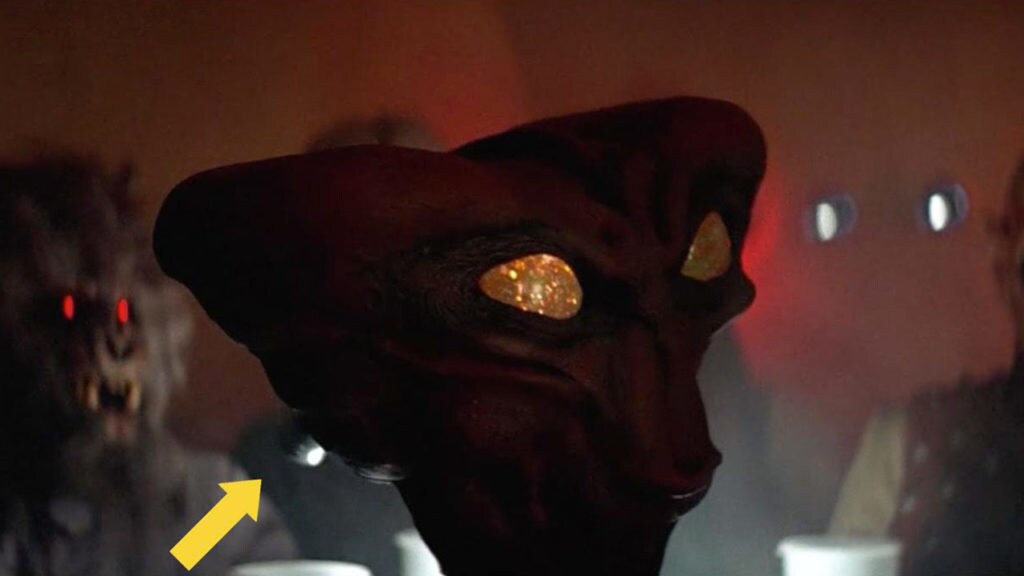 One of the most memorable aliens of the cantina to me is the T-headed creature of the Arcona species, Hem Dazon. He is one of the very first faces you see when the scene begins, popping his triangular dome into the shot and pivoting his head quizzically. It’s hard not to notice Hem, but it is easy to miss the low-budget effect when he turns his head. Star Wars creature expert Tom Spina shared with me a fun fact about Laine Liska’s glowy-eyed cantina regular. Those sparkly eyes were made brighter by a '70s-style, silver flashlight shoved right into the back of the creature’s head. Blink and you miss it, but it’s cool to see just how scrappily the creature crew came together.

Trinto Duaba was one of those particularly lucky cantina characters that somehow survived the Star Wars underworld long enough to show up in The Force Awakens. One of the spookiest looking of the bunch, Trinto had several production nicknames including “Veiny,” “Future Man,” and the most well-known to die-hard cantina fans, “Terminal Man,” for the electrical terminals on his head. The origins of Trinto’s mask started well before the idea of the cantina. Rick Baker actually created the mask as a concept for Frankenstein’s monster and repurposed it for the idling denizen. But the recycling of this mask doesn’t stop there. Another cantina patron was born after someone recast the Terminal Man mask and slapped a quick fake mustache on it, creating an extra shady character who now goes by the name Braconnor Bakiska. How’d he get that interesting name? A combination of Rick Baker, Laine Liska, and one extra lucky fan that you can read about here. 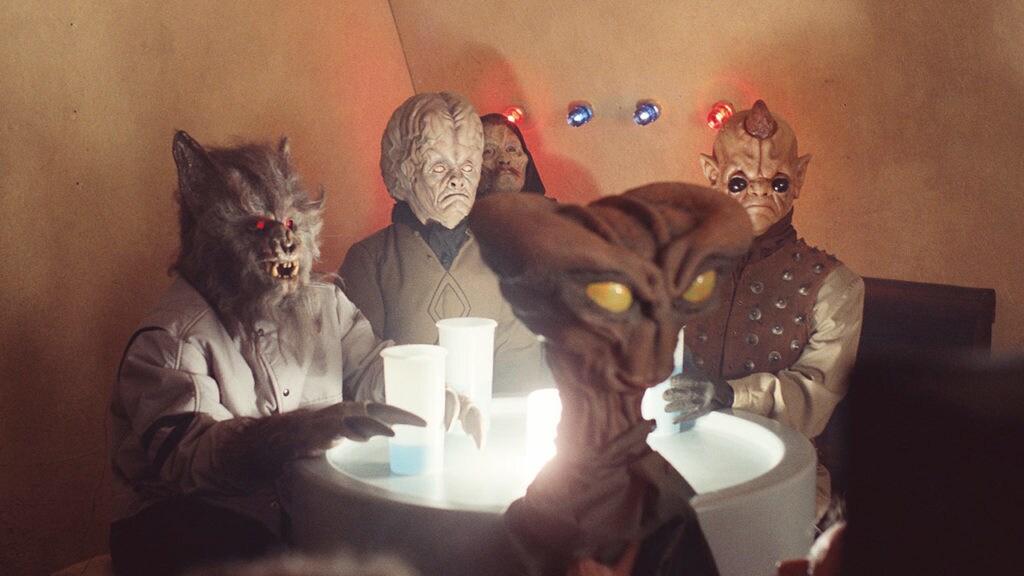 Another fantastic recycled mask used by Rick Baker’s team in the cantina was the infamous red-eyed “Wolfman.” If you’ve only ever seen the Special Edition, sadly you were robbed of this particular alien. Wolf Man, who was later properly named Arleil Schous, was replaced by the turban-wearing, pipe-smoking Sarkan named Melas because of George Lucas’ dissatisfaction with the "off-the-shelf" look of the creature. However, if you do catch a glimpse of Arleil’s glowing red eyes in the original cantina scene, know that he has a pretty terrifying history. The wolf mask was originally used in a 1974 Halloween live show called Into the Attic. The production put on by Bob Burns featured Rick Baker in the wolf mask acting as a demon summoned by an Exorcist-inspired, possessed little girl.

One of the very few barflies that actually comes off as cuddly is the fluffy, four-eyed Muftak, or as he was known in production, “Spider-Man.” His nickname comes from his resemblance to multi-eyed arachnids and not similarities to the Marvel superhero, however Muftak’s shady backstory would probably make him a prime target for a crimefighter. Originally named “Culltran,” Muftak lived in the underground tunnels beneath Docking Bay 83 after being abandoned as a baby. How’d he get money for that drink he’s tossing back? Pickpocketing, of course. But don’t think it’s a one-man operation. Muftak runs his shifty robbery business with another seemingly cute, but sadly dangerous, cantina regular, Kabe -- the little bat-girl who can barely reach her cup. I’m not sure how afraid I’d be of a fluffy white spider and tiny bat in a vest robbing me at blaster point, but the duo must really clean up. It’s always the ones you least expect!

Fun fact #3: Muftak was played by Laine Liska, but behind-the-scenes shots show that he didn’t even have a bottom half to his costume!

When the Marvel comic adaptation of Star Wars was released, the scene featuring Jabba and Han -- restored in the 1997 Special Edition, but not included in the original theatrical cut -- was added to the comic. But we still didn’t get a proper picture of the boss. Oddly enough, when the time came for artist Howard Chaykin to draw Jabba, he used an interesting stand-in. A humanoid creature resembling a walrus (not to be confused with Walrus Man, Ponda Baba) that we had actually already seen in A New Hope. During shooting he was called “Mingo,” and you can see him super-briefly onscreen when Luke sells his speeder. It’s not clear why Mingo was a stand-in for Marvel’s Hutt, but I’m definitely relieved Jabba got his proper portrayal in Return of the Jedi. Interested in more behind-the-scenes facts about Jabba? Check out the last edition of Much to Learn!

Any other A New Hope alien intel you need? It was hard to get it down to nine, but let me know what I missed in the comments below!

Remember, there is still much to learn: check out 7 things you might not know about Jawas!

Special thanks to Tom Spina of Tom Spina Designs and Regal Robot for his added creature expertise! Check out Tom's work recreating aliens and restoring original Star Wars creatures and movie props on his site.