Special effects legend Ray Harryhausen, a hugely influential figure for his work on films like The Beast from 20,000 Fathoms (1953), Jason and the Argonauts (1963), and Clash of the Titans (1981), passed away on Tuesday. He was 92. Harryhausen's pioneering stop-motion animation techniques inspired generations of effects artists and filmmakers, and he leaves behind an unimpeachable legacy of innovation and iconic movie creatures.

"His impact is pretty astronomical," said Dennis Muren, creative director at Industrial Light & Magic, whose many credits include the original Star Wars trilogy and Jurassic Park. "There was really nothing else showing in the movie theaters at that time that had the imagination, or the locations, or the fantasies that Ray's films had. They just opened our minds to the possibilities of what you could do, but also just entertained the heck out of all of us."

Harryhausen's stop-motion effects were accomplished with fully-articulated, highly-detailed models that he would methodically animate and shoot frame-by-frame. When viewed at full speed, his creations came to life and appeared to interact with live-action actors and surroundings. Among Harryhausen's many memorable movie monsters were the prehistoric dinosaur that terrorized New York in The Beast from 20,000 Fathoms; the warm-hearted giant gorilla from 1949's Mighty Joe Young; and skeleton warriors from Jason and the Argonauts, who dueled live-action actors in what has become one of the most famous action spectacles in movie history.

Harryhausen was a hero to many at Lucasfilm and ILM, with a statue built in his image on display in Lucasfilm's Letterman Digital Arts Center campus in San Francisco. In the halls of ILM hangs a poster-sized still from 1958's The 7th Voyage of Sinbad, which was signed by Harryhausen on multiple visits.

"I saw The Beast from 20,000 Fathoms when it came out in the theaters," said Muren. "I must have been about six or seven years old. What I remember is hiding behind the seat, and then looking up and being terrified at seeing the dinosaur, but just loving it." Muren became so enamored with Harryhausen's work that he went to see The 7th Voyage of Sinbad eight times during its first week of release. When Muren was 14, he looked Harryhausen up in the Los Angeles phone book, called him and was invited to Harryhausen's home. He spent an afternoon with the effects master and his wife, looking at scripts and talking film. 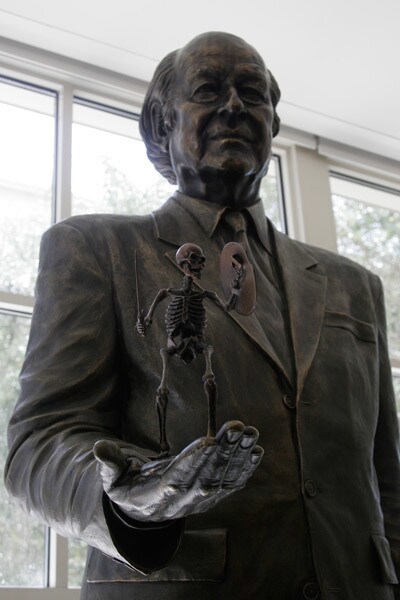 While Muren acknowledges that he probably knows how Harryhausen accomplished all his effects, that does not impact his enjoyment of the work. "It really doesn't matter. It's not so much the trickery of how. It's the artistry that could've been done many other ways and would not have been as powerful. It's the character designs. His dragon is the most beautiful dragon. If you look at the skeletons from Sinbad and Jason, it's not just a regular skeleton. If you look at that closely, you'll see it's got a demonic face and makes demonic, threatening poses. That's something that most Hollywood movies that were being made, they just didn't get that at all. Ray gave it everything he had, and believed in it. He believed in entertaining people.

"His legacy," said Muren, "is what an individual artist can present to people as a way of entertainment that has a sense of wonder and imagination and adventure in it. It's not going to be all the people he influenced. That's kind of obvious. I don't think that's as important as who he was."

Hal Hickel, ILM's animation director, studied Harryhausen's work intensely as a young fan. "They used to make little Super 8 reels for movies that collected the best scenes from a film," said Hickel. "And I had the reel from The 7th Voyage of Sinbad. I watched the fight between the cyclops and the dragon over and over and over. I had a Super 8 projector that you could advance a frame at a time, and I wore that film out, going through the sequence and studying things like how the dragon's tail was animated, or the interplay between the two characters and how he balanced that. I learned all kinds of things about how to animate from that one scene."

Interestingly, the movie legend sometimes kept his techniques close to the vest, which did not bother Hickel at all, who met Harryhausen on multiple occasions. "I found that well after he retired from making films, he would still be a little cagey about some of the technology, which I found charming. There were some things he did in Mighty Joe Young where Joe is standing next to some circus wagons that have lions in them, and one of them gets tipped over. And I know that they projected real footage of a lion into the back side of this miniature wagon. But you could still see the lion as the wagon was tipping over, and I always wondered how he got that. I asked him about it once, and he was very hazy and vague about it. I always loved that about him. He was like a magician who didn't want to give up all of his tricks.

"I feel like he was kind of a father to all of us," Hickel said. "In the beginning of the skeleton fight from Jason and the Argonauts, the teeth of the Hydra are thrown into the ground, and the skeletons spring out. That was Ray for all of us. We all popped up out of the ground from Ray's magic. We owe him a huge debt of gratitude for a lifetime of wonder that he helped instill in all of us."