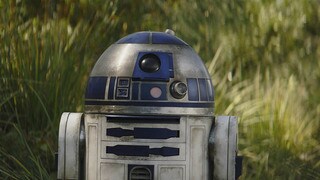 A reliable and versatile astromech droid, R2-D2 has served Padmé Amidala, Anakin Skywalker, and Luke Skywalker in turn, showing great bravery in rescuing his masters and their friends from many perils. A skilled starship mechanic and fighter pilot's assistant, he has an unlikely but enduring friendship with the fussy protocol droid C-3PO. 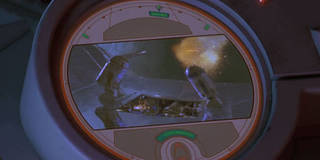 R2-D2 is aboard Queen Amidala's royal starship as she tries to run the Trade Federation's blockade. He repairs the ship's damaged shields under heavy fire, allowing it to escape into hyperspace. 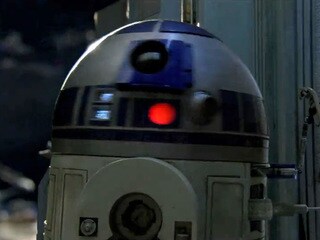 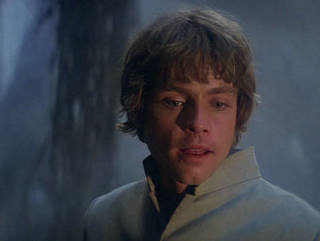 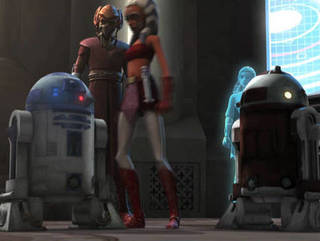 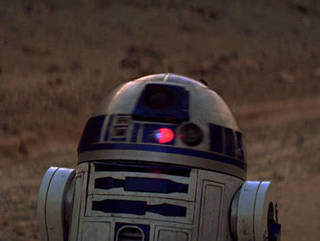 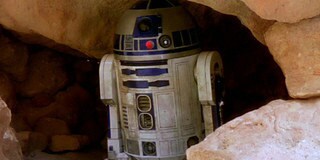 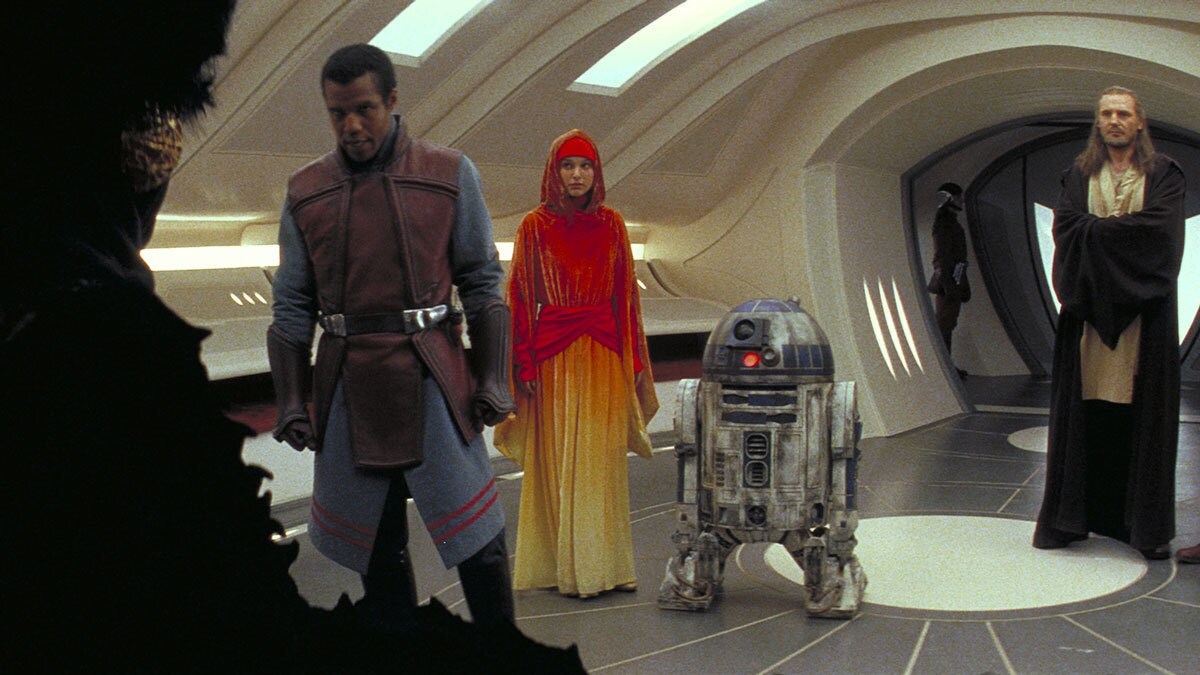 After the Trade Federation's occupation of her planet, Queen Amidala attempted a daring escape through an orbiting blockade of warships. Her Naboo Royal Starship suffered heavy damage, however, and several astromech droids were dispatched to make emergency repairs. Attached to the ship’s exterior, they were picked off one by one by relentless enemy fire. Yet a certain plucky droid remained: R2-D2, a white and blue model. He successfully restored the ship’s shields, giving it the chance needed to make the jump to hyperspace. R2-D2 was recognized by the Queen for his service, and he would accompany her handmaiden, Padmé, Jar Jar Binks, and Jedi Qui-Gon Jinn when they reached Tatooine. On the desert planet, he was introduced to a still-under-construction protocol droid called C-3PO. They were fast friends, and Artoo immediately chided Threepio for being “naked,” as his parts were showing. Later, R2-D2 would assist nine-year-old Anakin Skywalker in a Naboo N-1 starfighter during the Battle of Naboo. 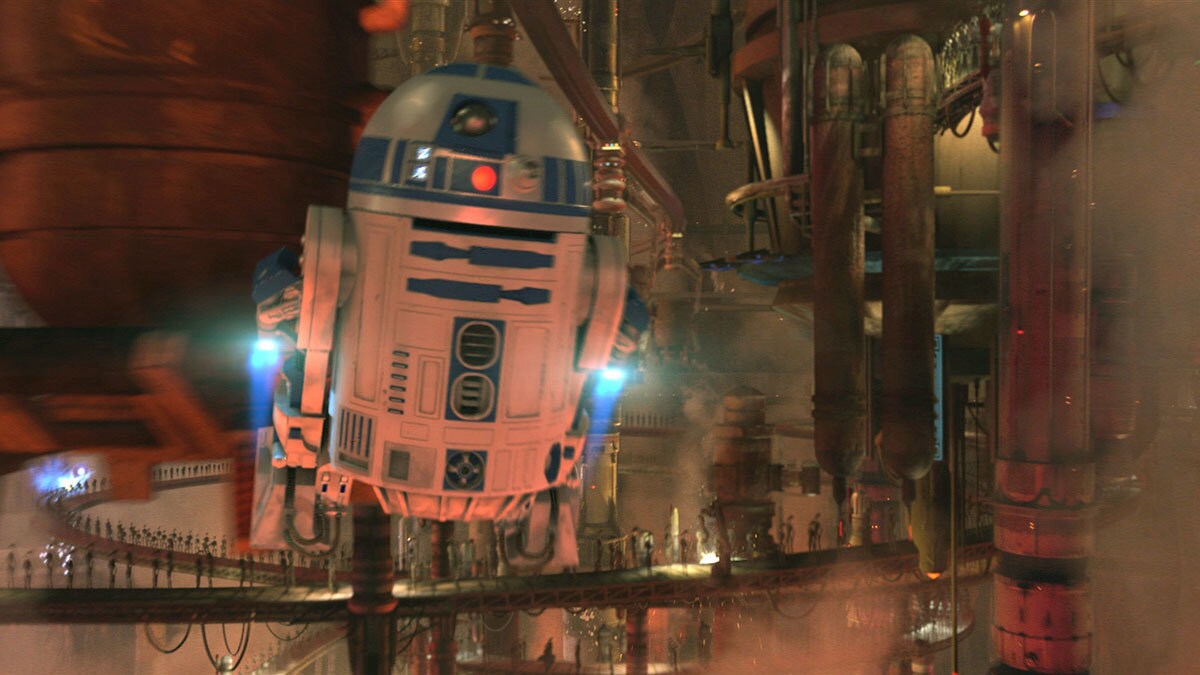 R2-D2 remained in the service of Padmé -- in reality, the former Queen of Naboo -- who was now a Senator. He watched over her after assassination attempts masterminded by Jango Fett, and accompanied her and Anakin on a visit to Naboo. Later, however, the curious astromech found himself reunited with C-3PO on Tatooine. Together, they left with Anakin and Padmé for the Separatist world of Geonosis.

R2-D2, his protocol droid friend, and his masters entered the Geonosians’ massive droid factory, which was building an army to strike against the Republic. R2-D2 saved Padmé’s life, jetting to a computer terminal and shutting down the assembly line before the Naboo Senator was bathed in molten metal. After a mishap in the factory, C-3PO temporarily swapped heads with a battle droid; luckily, Artoo was there to help restore his counterpart. 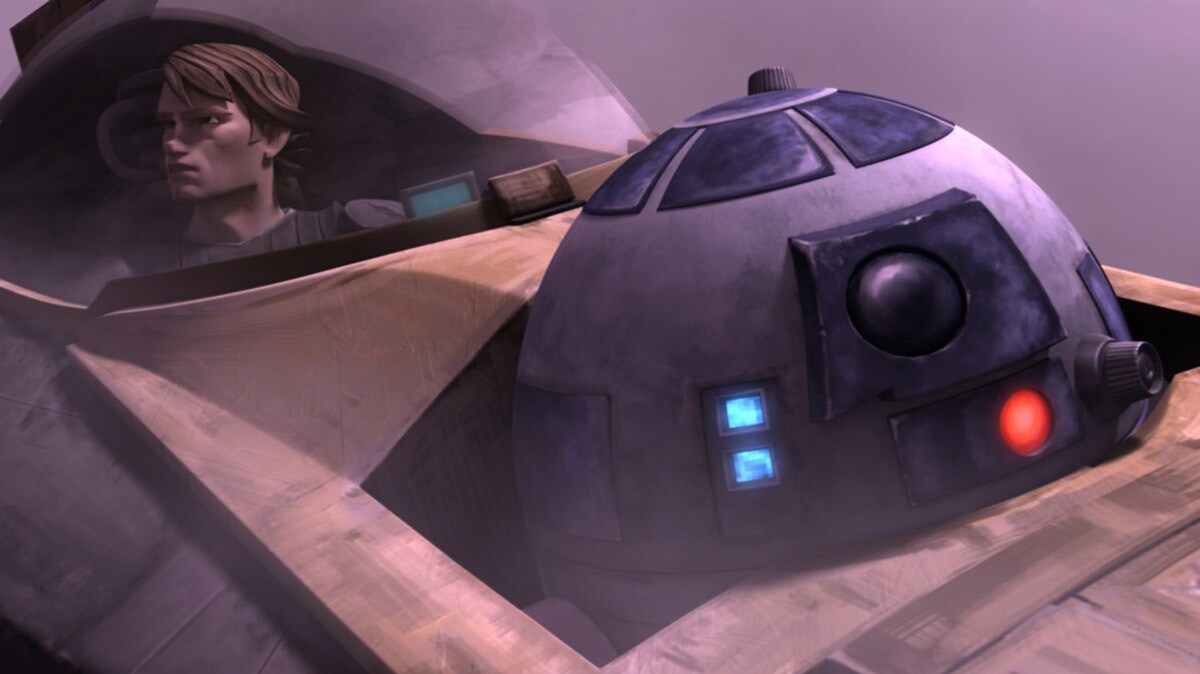 During the Clone Wars, R2-D2 was both a pilot’s assistant to Anakin and a secret weapon to the Republic. In one of his many adventures, he joined four other droids in D-Squad: an elite unit tasked with recovering an encryption module from a Separatist ship. But their escapades didn’t end there; the ragtag group, led by Colonel Meebur Gascon, crash landed on the void-world Abafar. They met an amnesiac clone trooper called Gregor, who later recalled his true self and helped the team escape the planet. Finally, when D-Squad found themselves to be the only chance to stop a deadly Separatist plot, R2-D2 made the ultimate sacrifice -- thankfully, Anakin ordered a search for his friend and had the droid restored.

Later, R2-D2 assisted Yoda in his journey across the galaxy. He traveled with the Jedi Master to Dagobah, a mysterious Force planet, and Moraband. 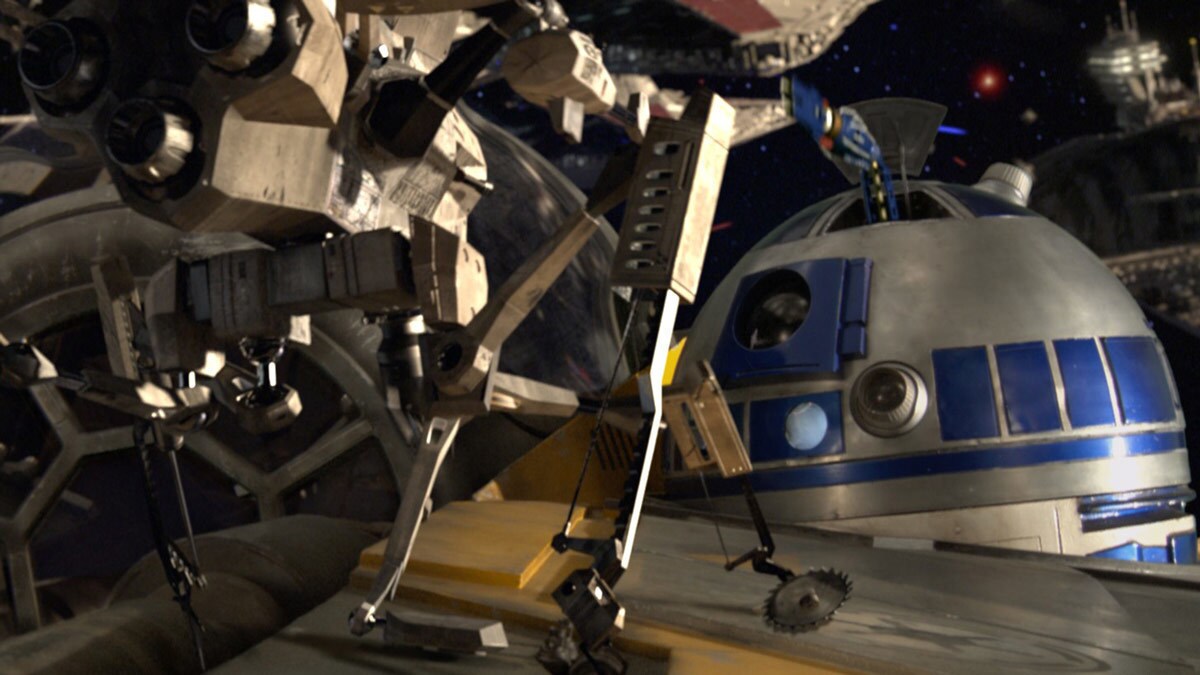 Throughout the three years of the Clone Wars, R2-D2 was Anakin’s loyal helper and sidekick. In a daring rescue of Supreme Chancellor Palpatine, R2-D2 served as his master’s assistant in his Jedi starfighter. The astromech successfully destroyed a buzz droid that was threatening to shut down Anakin’s ship, and later destroyed two super battle droids himself. But with Anakin’s turn to the dark side and the formation of the Empire, the astromech was once again paired with C-3PO and assigned a new master: Captain Antilles. He would remain in Antilles’ service for 19 years until fate would intervene… 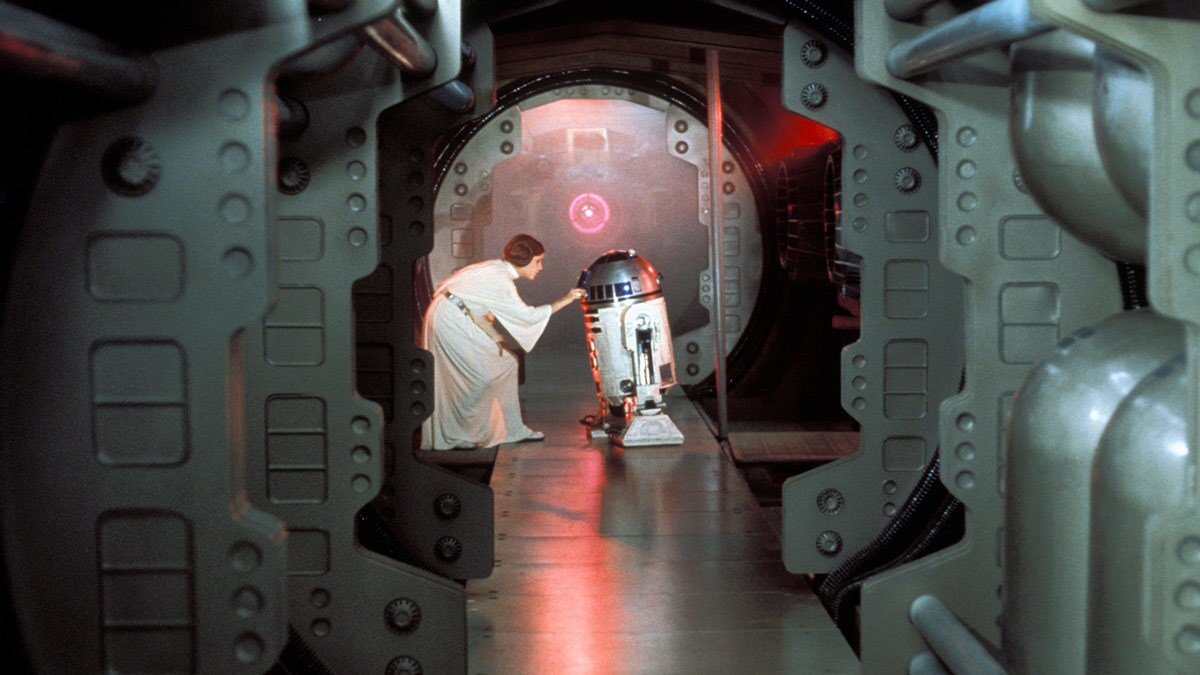 After years of tyrannical Imperial rule, a fledgling Rebellion won its first real victory against the Empire by stealing plans to its dreaded Death Star. Darth Vader tracked the schematics to the Tantive IV, which he boarded with a squad of stormtroopers. Princess Leia Organa, a secret Rebel leader, hid the data tapes in the memory banks of R2-D2, and the astromech jettisoned the ship with C-3PO.

Landing on Tatooine, the droids were captured by Jawas and sold to Owen Lars, a moisture farmer; Lars charged his nephew, Luke Skywalker, with care of the droids -- but Artoo proved difficult to control. He left the homestead on his own, claiming he was on a mission to deliver a message to Obi-Wan Kenobi. It turned out to be true: the Princess had recorded a distress message for Obi-Wan, detailing what to do with the stolen plans kept inside the astromech. Meanwhile, the Empire began a massive hunt for the droids, leading stormtroopers to kill Lars and his wife, Beru. Luke, Obi-Wan, new companions Han Solo and Chewbacca, and Artoo and Threepio left to help the Princess.

Later, with Leia rescued and the Death Star’s digital blueprints successfully delivered, the Rebel Alliance launched an attack on the space station. R2-D2, while a little beat-up, was picked by Luke to accompany him in his X-wing. The droid helped his new master with repairs and technical assistance, but took severe damage in the ensuing battle. Still, Luke destroyed the technological terror, and R2-D2 was fully restored and repaired. 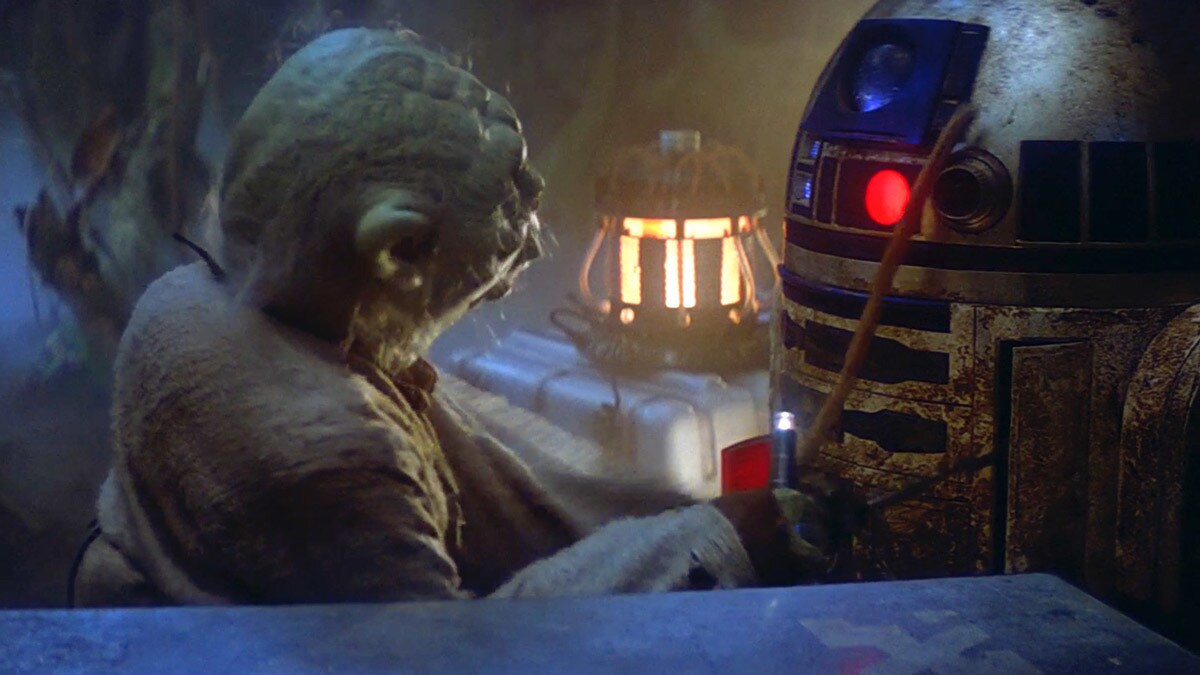 After an Imperial attack on the Rebel Alliance's Hoth base, Luke and Artoo headed for Dagobah in search of Yoda, a Jedi Master. Upon landing, R2-D2 slipped into a murky swamp and was attacked by a giant serpent-like creature; the plucky droid managed to escape, and kept Luke company until the arrival of a small, quirky green alien. Artoo and the strange visitor had a minor tussle over Luke’s lamp, with the astromech ultimately relinquishing it on Luke’s orders. As it turned out, the odd being was actually Yoda himself, and Luke’s training soon began.

Some time later, Luke left for Cloud City to face Darth Vader, R2-D2 in tow. While the droid and his master were cut off from each other, Artoo reconnected with C-3PO and friends, helping them escape from the clutches of the Empire. 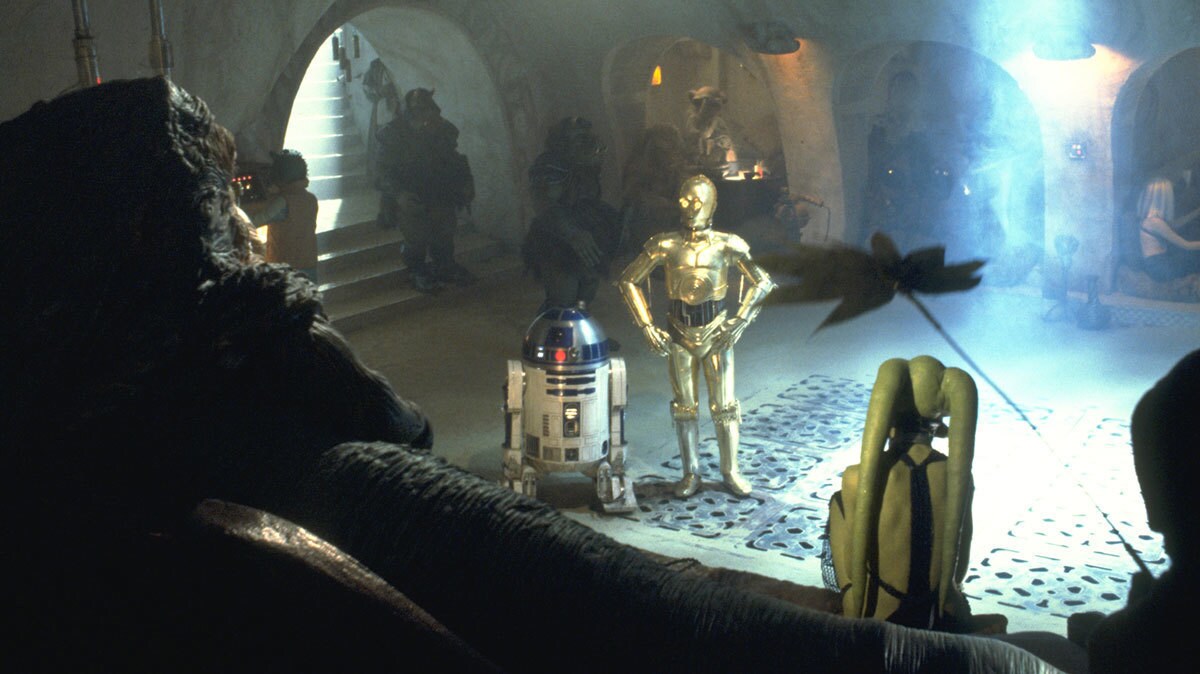 Han Solo had been frozen in carbonite and delivered to Jabba the Hutt on Tatooine, a heartbreaking turn of events for his friends. They devised a rescue mission, however, with R2-D2 and C-3PO at the center of the plot. The droids infiltrated Jabba’s palace, setting the stage for Leia, Chewbacca, and an unarmed Luke to join them -- and be taken prisoner. Just before Luke was to be pushed into the Sarlacc by one of Jabba’s henchmen, the plan was revealed: R2-D2 had been carrying the Jedi’s lightsaber the entire time, and launched it directly into his waiting hand. Luke led the destruction of the crime lord’s forces and Han’s rescue was complete.

Artoo again accompanied Luke to Dagobah, where the Jedi said goodbye to a dying Yoda. They then regrouped with their friends and left for Endor, the forest moon housing the Death Star II’s shield generator. In the ensuing Battle of Endor, R2-D2 stayed close to C-3PO, and made an attempt to open the blast doors of the shield generator’s bunker. Unfortunately for Artoo, the bunker’s security system overloaded the droid’s circuits. He was later repaired, however, and joined his friends and new Ewok companions in a joyous victory celebration.

After the Battle of Endor, R2-D2 accompanied Luke on many missions to recover lost Jedi lore and rebuild the Jedi order. Artoo witnessed both triumphs and tragedies, culminating in Luke’s decision to retreat into exile.

With his master vanished, R2-D2 sunk into a kind of droid funk, entering a self-imposed low-power mode and ignoring all entreaties to engage with those around him. He became an odd sight at the Resistance base on D’Qar, a reminder of the glory days of the Rebellion who was sometimes visited by a melancholy C-3PO.

Happily, the droid revived at a critical moment, helping BB-8 discover the location of Luke’s planet of exile. R2-D2 then joined Rey and Chewbacca on their journey to Ahch-To, where he was reunited with his former master.

The plucky astromech continued to assist the Resistance as it rebuilt after the Battle of Crait. R2-D2 was with Leia when she died – as he had witnessed her birth. He was able to restore C-3PO’s memories after his friend returned from Pasaana and Kef Bir. And he flew into battle again, serving as Poe Dameron’s astromech during the raid on Exegol.