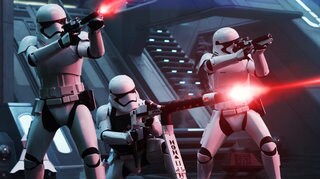 The First Order’s infantry units wear stark white armor derived from that worn by the Republic’s clone troopers and the Empire’s stormtroopers. Members of this new generation of stormtroopers are trained from birth, growing up with unit designations instead of names and fed a steady diet of First Order propaganda to ensure absolute loyalty. Where the Empire opted for numbing routine, the First Order’s training simulations and live-fire drills encourage improvisation on the battlefield, making these stormtroopers more dangerous than their Imperial predecessors.