Who is Doctor Aphra?

Meet the rogue archaeologist who’s teamed up with the galaxy’s greatest heroes and villains.

She’s worked for Darth Vader and lived to tell the tale, smiled at Emperor Palpatine, blasted baddies alongside Princess Leia, gotten into a bar fight at Luke Skywalker’s side, and kidnapped Hera Syndulla. She’s also endlessly inventive and unpredictable, has questionable morals, and is the only Star Wars character to take the comic book galaxy by storm without ever being seen on a screen.

We could only be talking about Doctor Chelli Aphra.

The good doctor is back in an all-new solo comic series by Alyssa Wong and Marika Cresta, and a new audio drama, Doctor Aphra: An Audiobook Original by Sarah Kuhn; let’s meet the fan-favorite antihero. 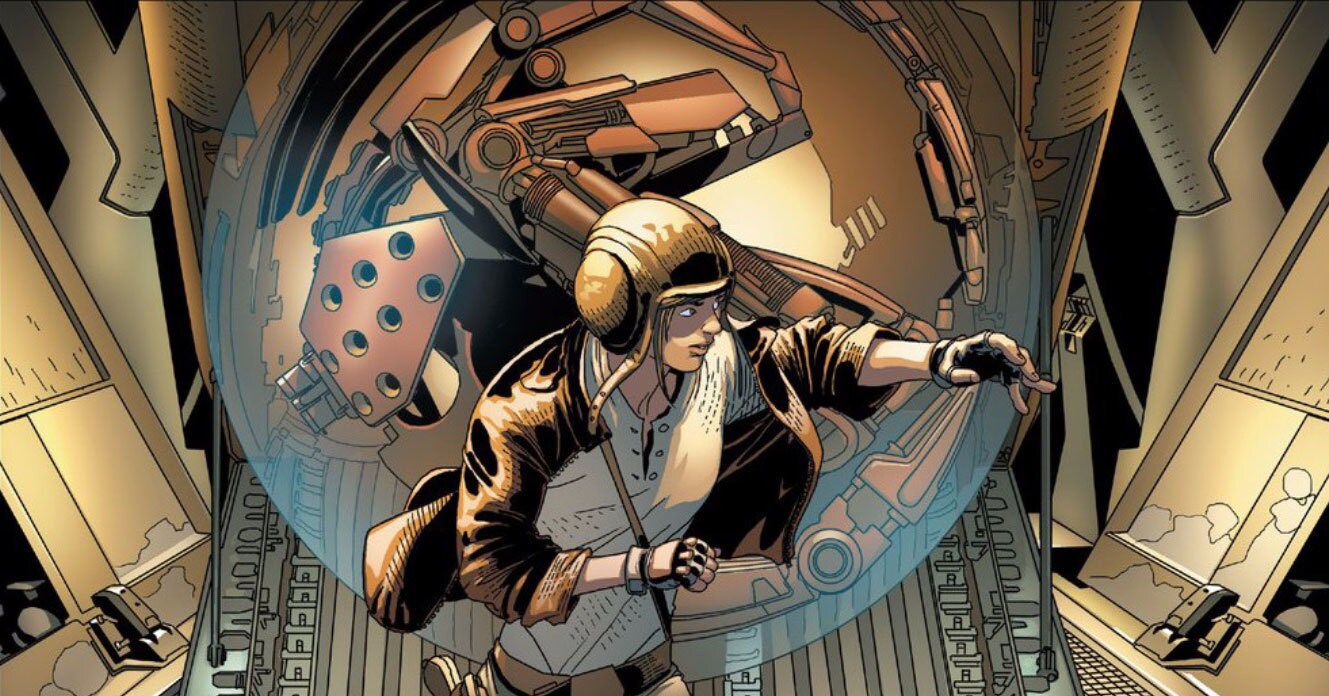 Chelli Aphra was created by writer Kieron Gillen and artist Salvador Larroca in Darth Vader #3 (2015). An archaeologist who stays rooted in the gray area between good and evil, the character started as a darker take on everyone’s favorite treasure hunter.

“Inverse Indiana Jones was kind of the initial call,” Gillen told StarWars.com, “and it always grows because you put it in Star Wars and it changes…Dropping an archaeologist in Star Wars makes sense, and that she’s morally unpredictable, that makes sense as well.”

Teaming Up With Darth Vader

Doctor Aphra’s partnership with Darth Vader began shortly after the Battle of Yavin. The doctor had just started talking her way out of capture by local authorities when an ominous-looking TIE fighter landed nearby. Darth Vader descended from the ship’s ramp, and Aphra’s life would never be the same.

Vader was there to recruit Aphra to help him build a private droid army. The unlikely pair began their secret mission together on her ship, the Ark Angel.

Vader and Aphra left destruction in their wake wherever they went, thanks in no small part to the two psychopathic droids in her service, Triple-Zero and BT-1. Eventually Vader tasked Aphra with finding the boy who had destroyed the Death Star. Aphra uncovered some of the truth about Padmé Amidala’s death, along with the whereabouts of Luke Skywalker, and she and Vader set out for an epic confrontation.

As Darth Vader approached the planet Vrogas Vas, Luke rammed his X-wing into his ship, bringing down the Dark Lord of the Sith. The archaeologist attempted to mount a rescue on the planet, but in the end Aphra was knocked unconscious by Leia’s left hook. The rebels escaped with the doctor in tow.

Aphra was taken to Sunspot Prison. The jail was infiltrated by extremists intent on killing all the criminals inside, so Princess Leia teamed up with her and Sana Starros -- who had her own past with Aphra -- to make it out alive. Aphra earned Leia’s grudging respect; the princess looked the other way while the doctor escaped.

Aphra failed Darth Vader, so it was no surprise that it was time to face her doom. Aphra had one more play to make. She walked into Emperor Palpatine’s chambers, head held high, and proceeded to tell him everything that she and Darth Vader had been doing. 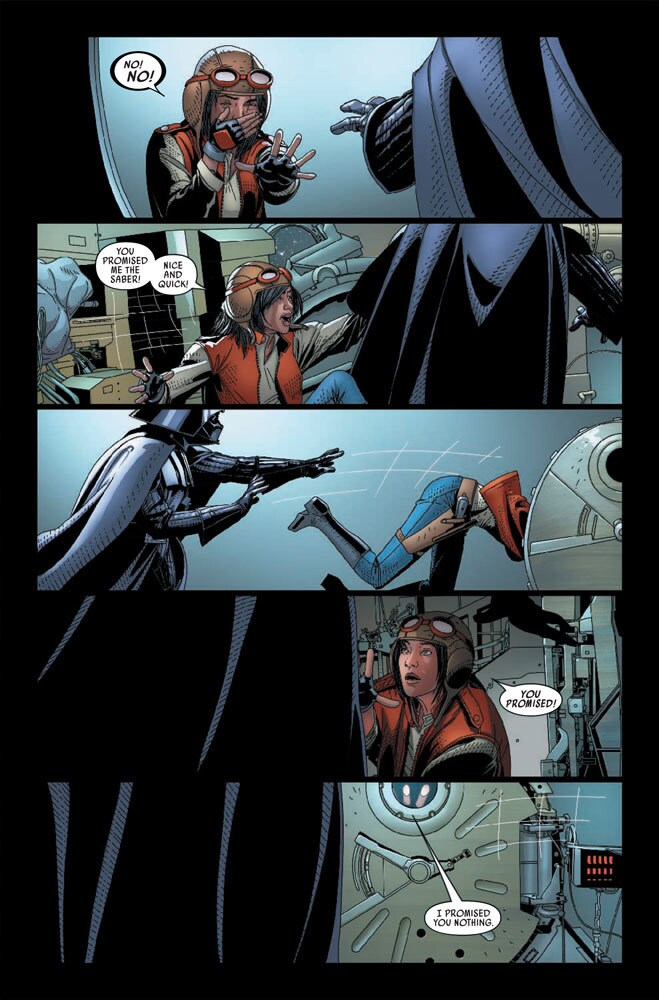 But rather than turning the Emperor against his apprentice, she was shocked to hear his praise of Vader’s traitorous initiative. (It was the way of the Sith to betray each other.) Darth Vader had finally re-earned his master’s approval. As for Aphra, she had finally outlived her usefulness, and Vader threw her into an airlock and vented it into space.

Aphra survived. She’d expected her inevitable “death” at the hands of Vader and set her clever contingency plan in motion. Presumed dead, Doctor Aphra was now free to pick up her search of the galaxy for artifacts for fun and profit. 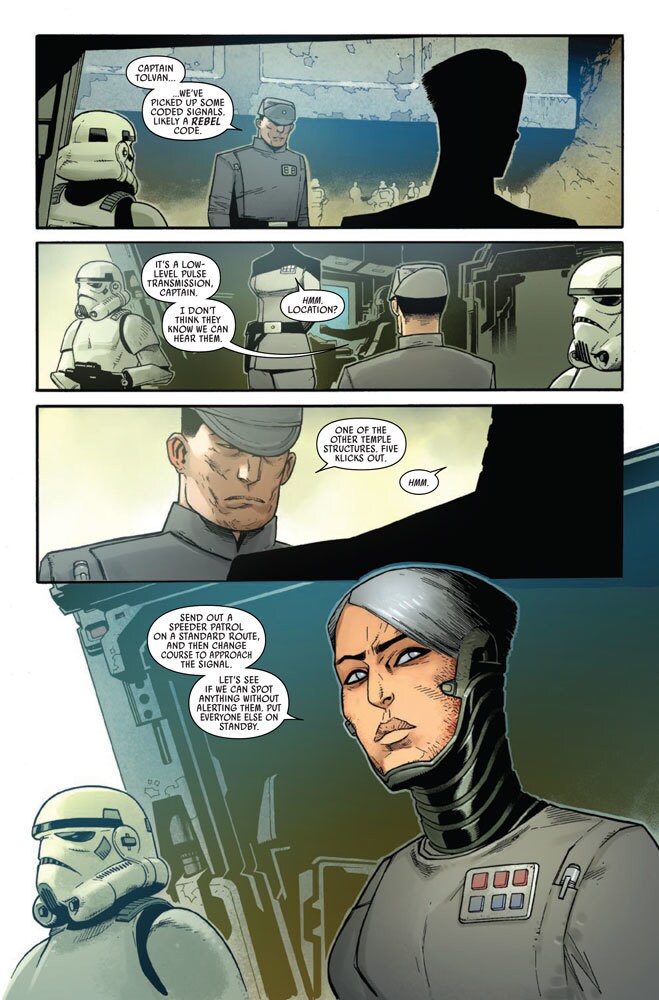 Aphra’s father found her next and blackmailed her into finding an ancient sect of unorthodox Jedi. Soon an Imperial captain named Magna Tolvan and her troops were hot on Aphra’s trail. They followed her to a fortress in the far reaches of space, where she discovered an ancient crystal that housed the spirit of a vengeful Jedi Knight. Aphra switched out the crystal for a fake, keeping the real one for herself, and began a new quest to unlock its secrets…so she could sell it.

For that, she needed Luke Skywalker. Luke reluctantly trusted the rogue archaeologist, who promised him Jedi knowledge in return. Aphra took him to the Screaming Citadel to convince the fortress’ powerful ruler to reactivate the crystal. A few betrayals and one small change of heart later, Aphra had what she wanted, but lost Luke as an ally.

She gathered some of the galaxy’s worst to start bidding on the ancient artifact. Triple-Zero and BT-1, wary of their master deactivating them, invited Aphra’s old friend Darth Vader to crash the party. Vader hadn’t been informed that she was alive, however, and it would remain that way as long as the doctor removed the droids’ restraints. She agreed to their terms, and the two were free to wreak havoc on an unsuspecting galaxy.

Triple-Zero wasn’t done with Aphra yet. The deadly droid blackmailed her into a variety of missions, during which she crossed paths again with Imperial officer Magna Tolvan. Even as destruction rained around them, the doctor and the captain acted on their mutual attraction and shared a passionate kiss. 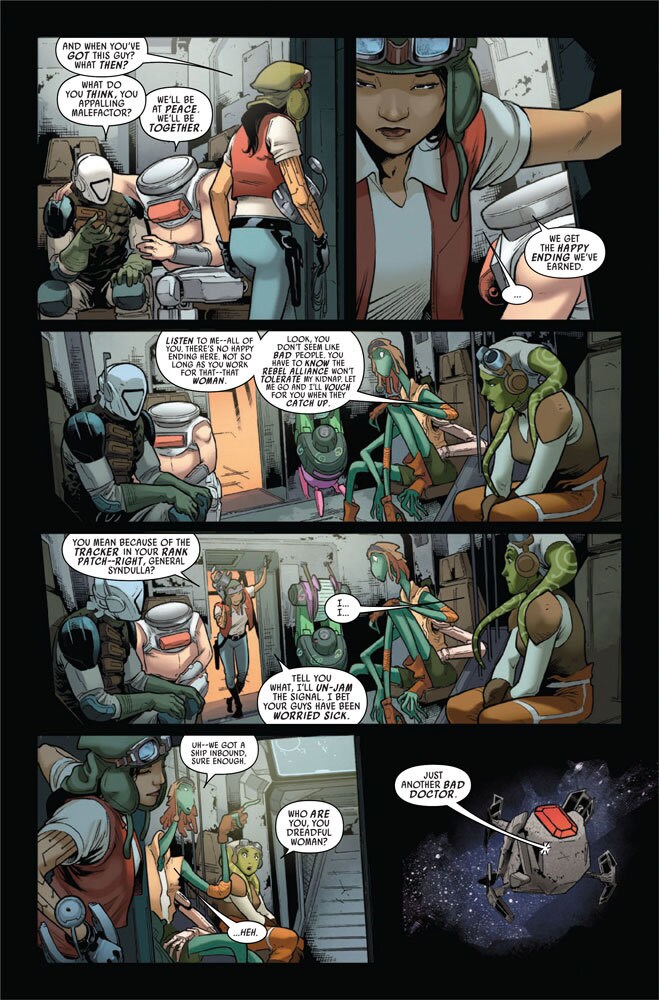 The droid was determined to retrieve his memory files from the Tarkin Initiative databank. Aphra and a band of mercenaries kidnapped and offered up Hera Syndulla to the Imperials as a distraction, destroyed just about everything except the data they needed, and returned to the rebels to safely deliver Hera and some of the intel. General Syndulla allowed Aphra to leave, returning the favor.

Aphra didn’t make it far. She was captured and placed in one of the Empire’s most dangerous prisons, and despite her considerable cunning, found herself unable to escape. 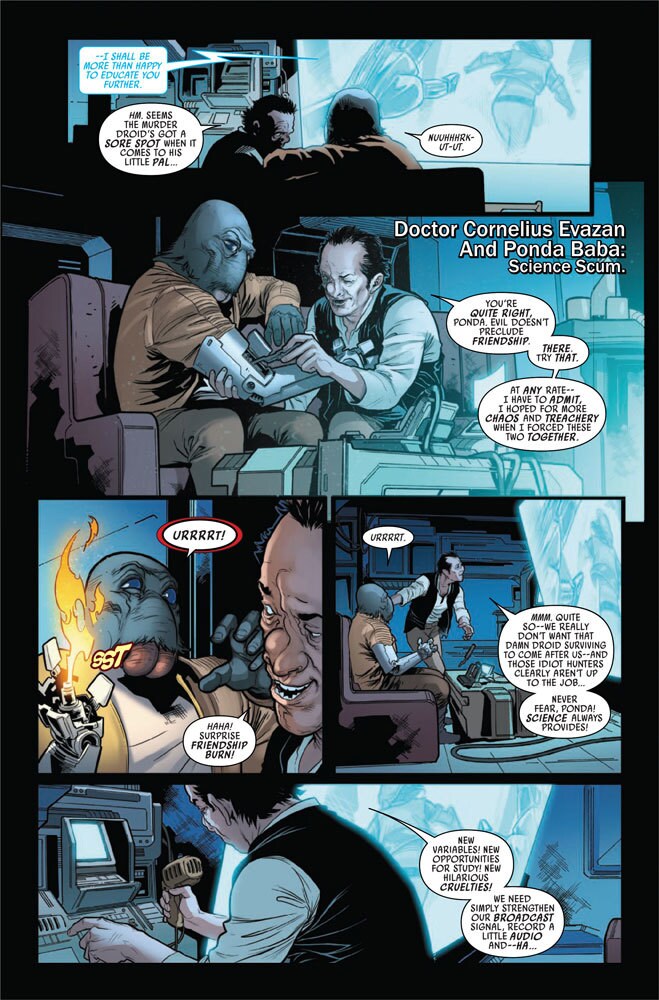 The wily doctor had encrypted both the stolen data from the Empire and Triple-Zero’s memories, making her a wanted woman. Hera reached out to Sana Starros to retrieve Aphra from prison to unlock the intel. A few twists and turns and mutated space spores later, Aphra found herself with the actual worst doctor in Star Wars, Doctor Evazan.

Evazan, a monster inside and out, linked Triple-Zero and Aphra by placing bombs inside their bodies that would explode if either of them strayed too far from the other. (He thought it would be funny.)

The two unwilling companions attempted to find an expert on the planet Milvayne to remove the implanted bombs but started a countdown timer to detonation instead. The fugitives raced to find another technologist and dodged everyone who wanted to cash in on their capture. At the last moment, the bombs were deactivated, and the droids and Aphra were free once again.

Some time later, fate, or something else, brought Magna Tolvan back into Aphra’s life. Now a rebel, Tolvan’s commanding officer offered Aphra a place with them. She declined. But with the Empire again hot on her trail, Aphra did what she had to do to stay alive and reported the rebels’ plans to the Empire. She maneuvered her way into a pardon, ended up saving the Emperor’s life from a traitorous plot, and got the attention…of Darth Vader. 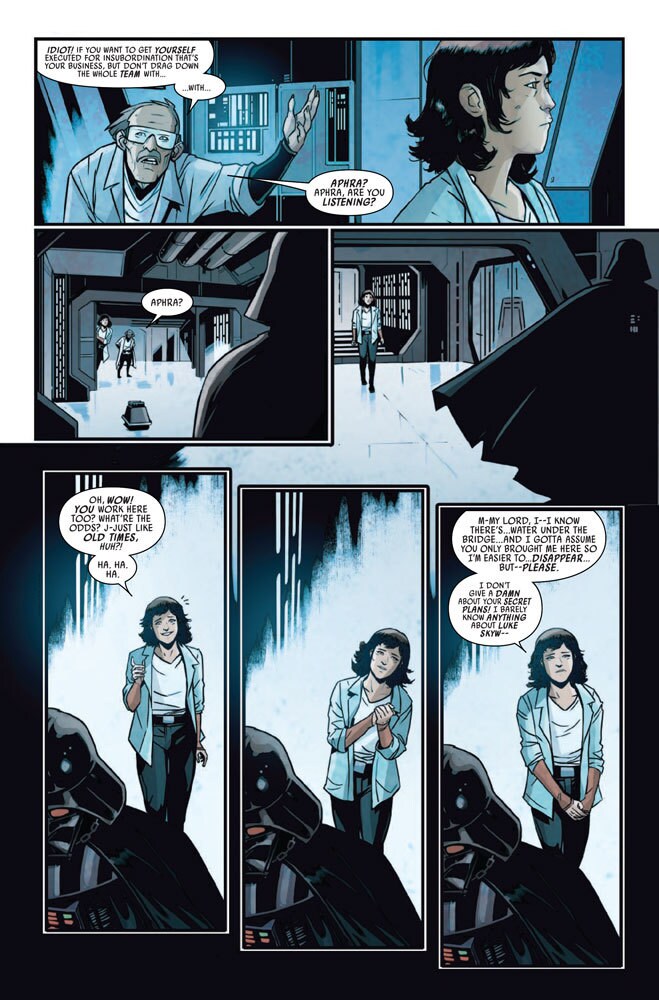 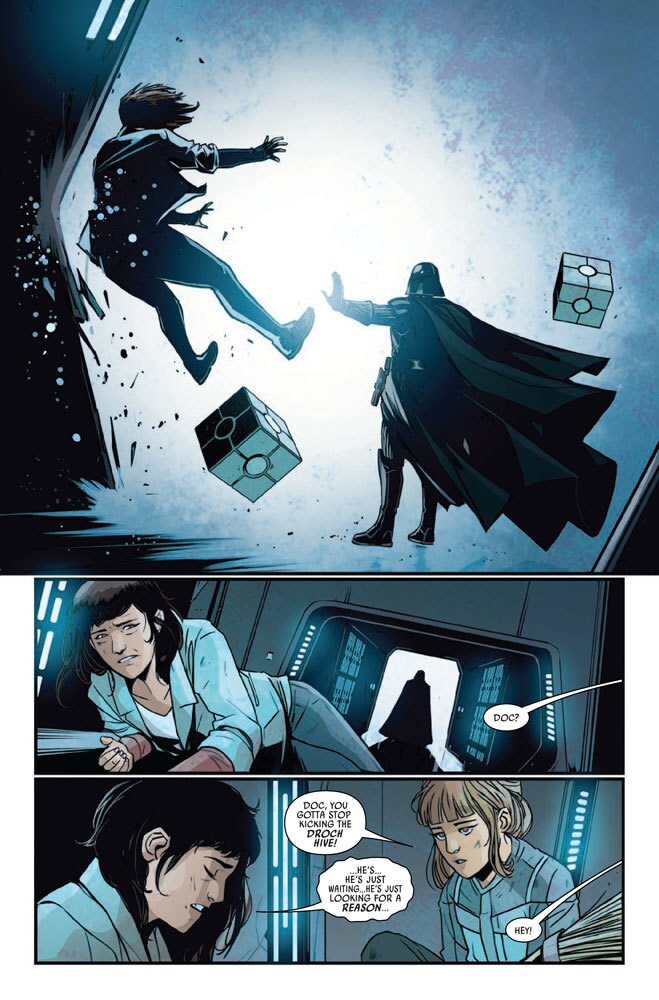 As a “reward” for her service, Aphra was taken on board the Executor to join the hunt for hidden rebel bases. At one possible location, they discovered what they thought was a rebel sympathizer, and brought him on board for questioning. It was none other than Aphra’s father. And the interrogators? Triple-Zero and BT-1, who’d had their memories wiped and now served the Empire.

Sent to investigate another potential base, Aphra and her father were intercepted by a Rebel Intelligence team, and she and Tolvan had a confrontation that was a long time coming. Through Tolvan, Aphra finally learned the location of the rebels: Hoth.

But the rogue archaeologist always has a plan. She led Darth Vader to the wrong planet, removed the restraints on Triple-Zero and Beetee, and used an ancient Jedi artifact to incapacitate the Dark Lord of the Sith. Aphra escaped and roamed the galaxy once more, although she’d always have to look over her shoulder for a familiar dark shape…

Aphra’s (mis)adventures continue in Doctor Aphra (2020), the ongoing series from Alyssa Wong and Marika Cresta! The doctor has a new crew of treasure hunters at her side in her quest for fortune and glory. Find the series now at your local comic book store and online where digital comics are sold.