Fully Operational Fandom: This Vader Down Diorama Makes Us Want to Turn to the Dark Side

The Marvel comic book crossover event Vader Down found the Dark Lord's TIE fighter shot down, forcing the Sith to take on legions of rebels alone. For fan Wissam Santina, the comic was an invitation to create a striking, vivid diorama. "Vader Down was the first comic I read," Wissam says. "...the moment he crashed -- it kept me thinking how epic it would have been if it had been a cinematic scene. Then came the thought of exploring the idea of creating this scene from a diorama and improving it digitally to make it look real." Darth Vader is character that made an impression upon Wissam at an early age. Born in Beirut, Lebanon, in 1980, he had to wait a few years to see Star Wars. When he was around six, he saw A New Hope and fell in love with it. He watched The Empire Strikes Back and Return of the Jedi within the following year. He says, "What really stuck with me ever since was the last scene in Return of the Jedi, when the Emperor was torturing Luke to death. The amazing thing was that you could feel Darth Vader being torn apart from the inside when he had to decide to save his son and kill the Emperor, despite not being able to see his facial expressions." Wissam's interest in Vader is what spurred him to read Marvel's comics. He wanted to explore more about the character. As mentioned, he began with Vader Down. He saw the art of the Sith Lord's crash and felt compelled to turn it into art by mixing practical elements with digital manipulation. It all started with the ship. Wissam explains, "The research process took me some time to see what was the most detailed model kit to use and what could be easily broken down to give it the crash effect." 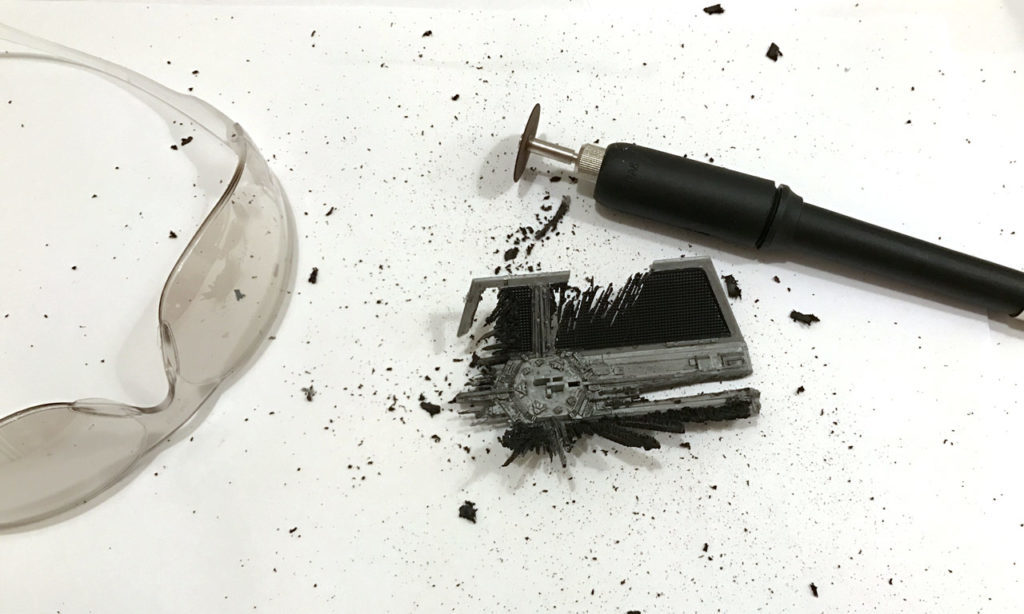 The kit he was looking for turned out to be Bandai's TIE Advanced X1 starfighter. He experimented with one of the starfighters but ended up ordering a second kit for the final project. The steps to match the out-of-the-box kit were numerous and required the patience of a Jedi Master. He had to paint the kit with silver acrylic paint, add details with different shades of acrylics, and weather the model with matte varnish and black chalk mixed with water. Then, he cut the cockpit apart and painted the edges to look like melted steel. Wissam says some of the techniques were familiar to him, but he had to do research for the effects he wanted. 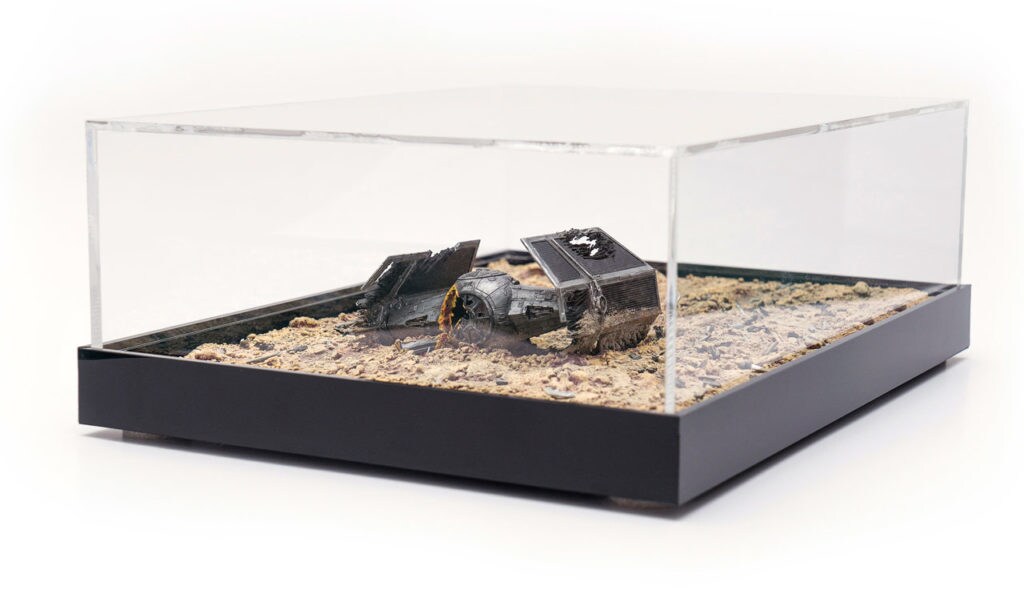 The trickiest part of deconstructing and weathering the model, he says, was adding the broken glass to the cockpit. He turned to office supplies for the solution: "The one [window] that came with the kit was too thick and small; it was almost impossible to give it the broken effect. Then came the thought of using a transparent TVC that is used for filing papers. That was just perfect and easy to do." 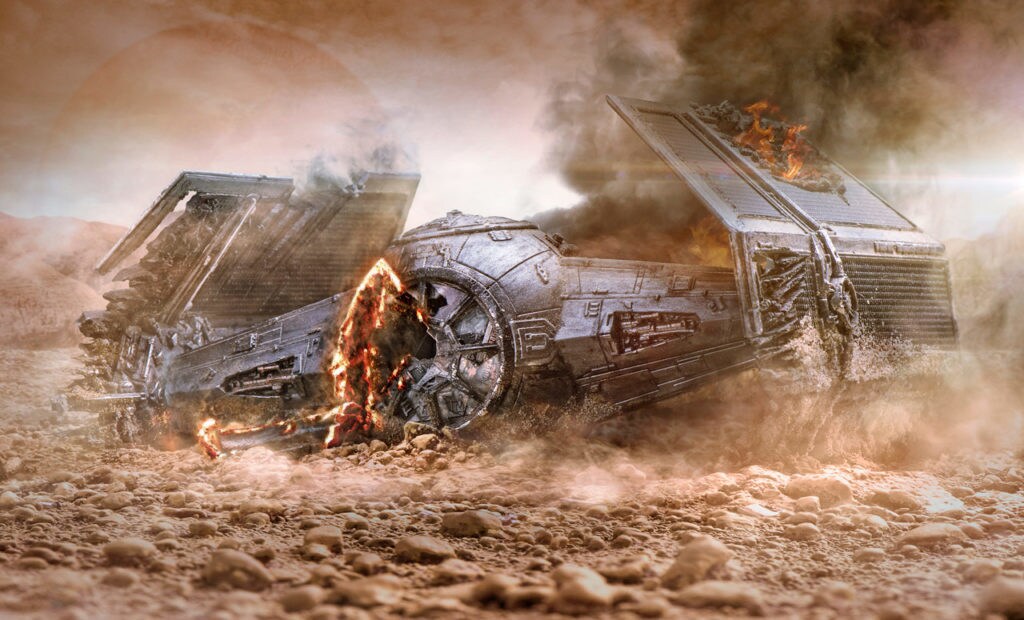 Making the TIE fighter took Wissam about 50 days to complete. Next, Wissam turned his attention to making Darth Vader. He purchased the best figure he could with his budget, but it didn't have the level of accuracy he wanted. The cape in particular needed some tweaks, so Wissam performed practical and digital improvements. He covered the cape with black fabric to give it the sort of texture he wanted, and then he took to the computer. "The cape had to look dynamic and there was no way to use the one that came with the figure," he explains. "Therefore, I decided to remove it and make one on Photoshop with the support of stock footage. I did some research to see how the details on his cape look, especially around his neck. I got a few references and started building it from scratch. It wasn’t easy at all, as every part of the cape around the neck took a whole night to accomplish."

With the real life and digital elements complete for the TIE Advanced X1, Darth Vader, and the ground, Wissam focused his efforts on taking photos of the diorama. He used a macro lens with his Nikon D750 to capture the details. "It was difficult to get the right angle because the lens was large, and I had to shoot the TIE at a very low angle, " he says. "The lens had to go below ground level due to its size, which was a problem. So, I came up with a small trick where I lifted the back side of the diorama by a small angle so I could see more of the foreground." 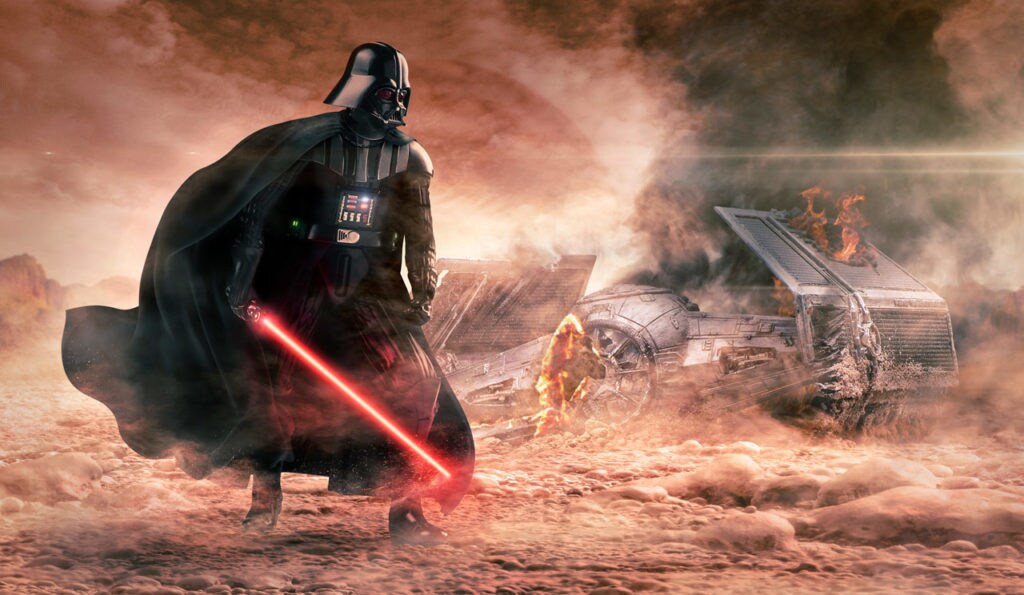 Wissam says three key guidelines helped him complete his Vader Down diorama. "One: Stay focused on the end result. Two: Break down the process into multiple projects, and finish each one until perfection (solve one problem at a time). Three: Work with layers. The more layers you add, the more detailed the project becomes (digital or manual)."

The end result? Impressive. Most impressive.