A grubby, scarred smuggler from Alsakan, Cornelius Evazan was once a promising surgeon, but became notorious for conducting cruel medical experiments. Dr. Evazan tried to bully Luke Skywalker in the Mos Eisley cantina, boasting that he faced a death sentence in 12 systems. The doctor and his pal Ponda Baba assumed the young farmboy would be an easy target, and paid little heed to the old man in dusty robes who’d accompanied young Luke into the bar. That was a fatal mistake: when Evazan hurled Luke aside and pulled his blaster, Obi-Wan Kenobi coolly ignited his lightsaber and cut Evazan down. 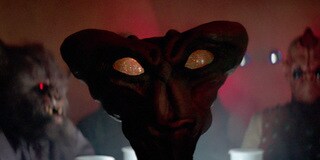