From the moment Ahsoka Tano stepped out of the ship in the Star Wars: The Clone Wars animated film, she captured our attention -- and our hearts. The young Padawan was a newcomer to the war as well as the story of Star Wars, but she proved to be a fast learner. Ahsoka quickly adapted to life with Anakin Skywalker and Obi-Wan Kenobi as well as all the chaos that comes with it.

But prior to The Clone Wars, no one had known that Anakin Skywalker taught an apprentice -- no one, that is, except George Lucas. In creating the character of Ahsoka Tano, George Lucas offered a vital point of view for the audience, one that kids could directly relate to as they watched the galactic confrontation between the Jedi Knights and Darth Sidious unfold. Ahsoka's experiences could be their experiences, and as she grew up, so did they. Arriving first in the Clone Wars film, her journey unfolded in the series and beyond. As she returns in the final season of Star Wars: The Clone Wars, let’s look back at where her story began. 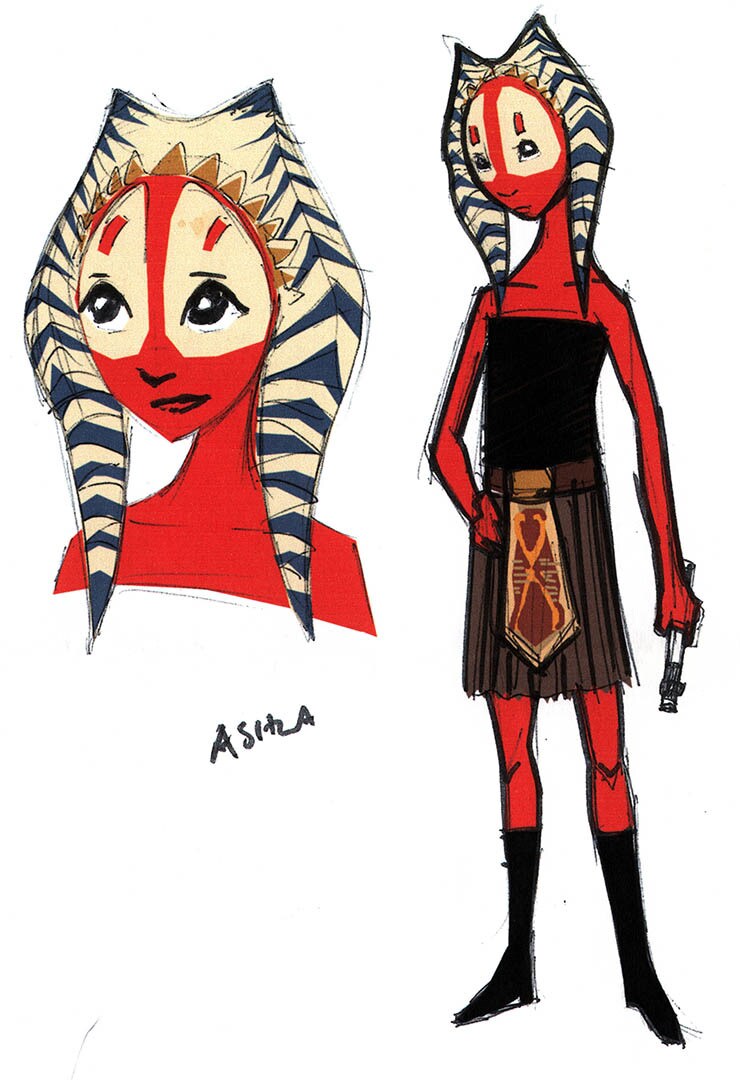 When The Clone Wars began development in 2005, the character that would become Ahsoka was part of a ragtag crew and envisioned by Dave Filoni under a different name: Ashla. But when George Lucas suggested shifting the focus of the show to Obi-Wan Kenobi and Anakin Skywalker to explore the toll of war for those on the front lines, Ashla became Ahsoka, Anakin’s young Padawan. The rest is history.

In-galaxy, Ahsoka’s story began when Jedi Master Plo Koon discovered the Force-sensitive Togruta when she was just a toddler, and brought her to the Jedi Temple for training. At the age of 14, she was dispatched to the planet Christophsis in the midst of a tense standoff between Republic and Separatist soldiers. Master Yoda had devised a plan to help Anakin Skywalker overcome his attachment issues by assigning a Padawan to him. The idea was that as Anakin trained the young Jedi he would see her become more self-sufficient, able to take care of herself, and thus learn to let go of his over-protective nature.

Like Anakin, Ahsoka was headstrong. She had a tremendous spirit, was courageous, clever, and not easily intimidated. Ahsoka was not afraid to challenge authority, but she also knew when to listen and show respect to those around her. She took the valuable teachings of her mentors to heart.

As the years passed, Anakin and Ahsoka developed a close friendship, like a brother and sister. While they often challenged one another, each held the other in high regard. Through her courage and leadership Ahsoka gained the respect of the clones that served under her and Anakin, especially Captain Rex. The clones could see she had the makings of a true leader.

At the height of the war, Ahsoka found herself framed for a deadly explosion at the Jedi Temple. As the evidence mounted against her, she was expelled from the Jedi Order.  Anakin never gave up on his apprentice and helped to prove her innocence. Despite her eventual acquittal, Ahsoka had witnessed the political nature of the Jedi Order and believed the Council had lost their way.  She decided her destiny was on a different path and in a surprising move, she walked away from the Jedi Order.

Soon, we’ll see how Ahsoka navigated the next part of her journey, finding her footing outside the Jedi Order. But we do know that she eventually found her way to the Rebellion against the Empire. 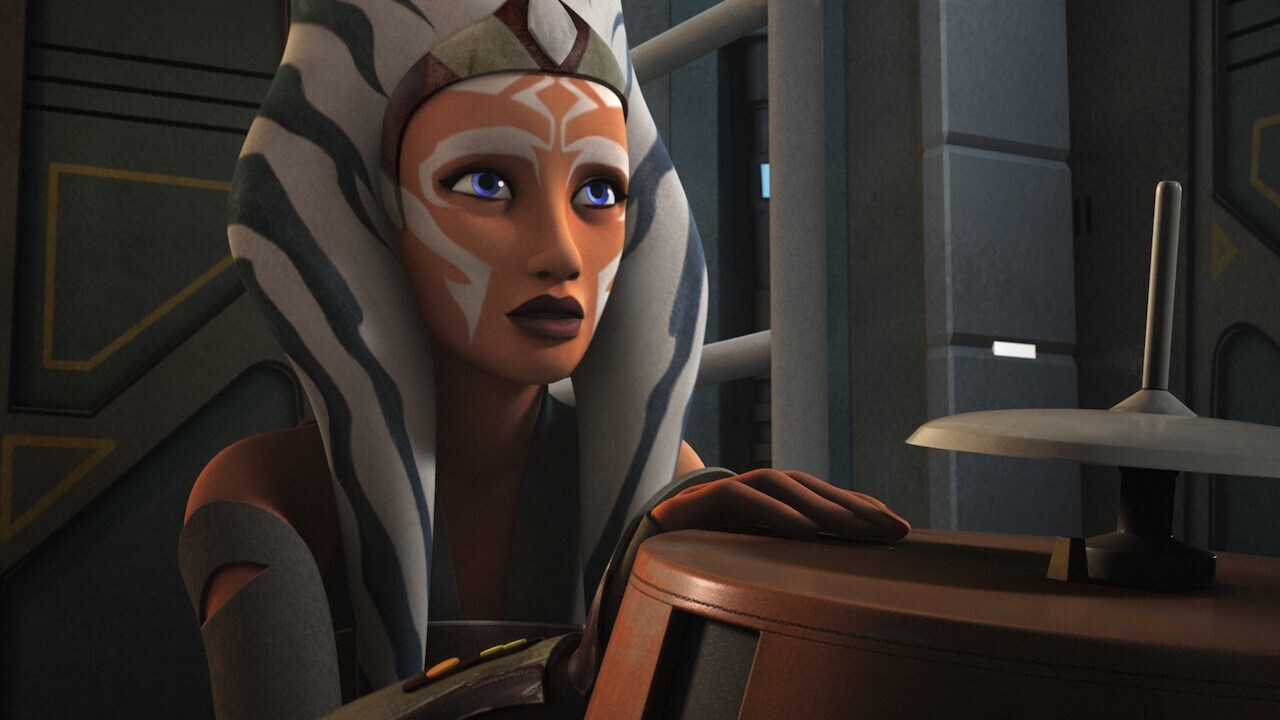 The Fulcrum of the Rebellion

After the fall of the Republic, the former Jedi worked behind the scenes as an anonymous and formidable spy known as Fulcrum and came to know a determined group of rebels: the crew of the Ghost, led by Hera Syndulla. Ahsoka was intrigued by Kanan Jarrus and his apprentice Ezra Bridger. Ahsoka saw in Kanan and Ezra the ways of the Jedi that she knew so long ago. She decided to help the two of them and their friends, believing that they could be a powerful symbol of hope during a very dark time.

By introducing these rebels to her old ally Captain Rex, this small group ultimately began to make an impact against the Empire, which garnered the attention of the Empire's more sinister agents. And before long, Darth Vader was dispatched to deal with the Rebel threat. Not knowing who this Dark Lord was or where he came from, Ahsoka began to try and seek out his identity, a mission that would eventually lead her to discover a haunting truth. 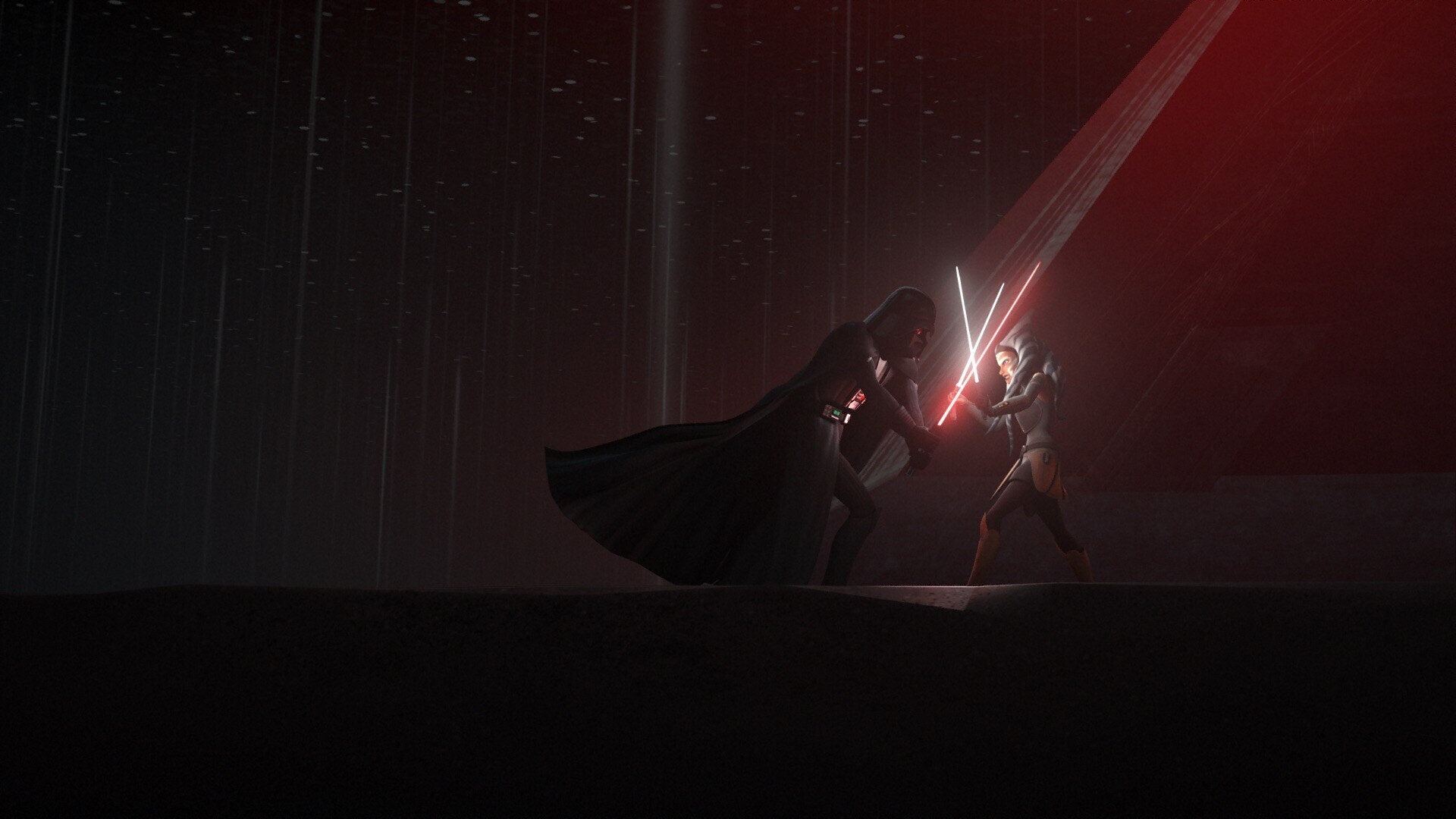 On the planet Malachor, Ahsoka joined Kanan and Ezra in their efforts to stop the Inquisitors, an elite group of Jedi hunters. There they discovered Maul, who led them to a Sith temple and attempted to sway Ezra to the dark side. It was atop that dark temple that Ahsoka came face to face with destiny when she finally confronted Darth Vader and realized the truth, that he was indeed her former Master and friend, Anakin Skywalker.

Their lightsabers clashed and the temple crumbled around them. Ahsoka was lost… or was she?

The young Padawan Ezra Bridger gained enough knowledge and power in the Force to change Ahsoka's fate. In an Ancient Jedi Temple on the planet Lothal, Ezra entered a bizarre realm known only as the World Between Worlds, a plane of existence within the Cosmic Force where he managed to pull  Ahsoka away from her battle with the Dark Lord of the Sith, saving her life. 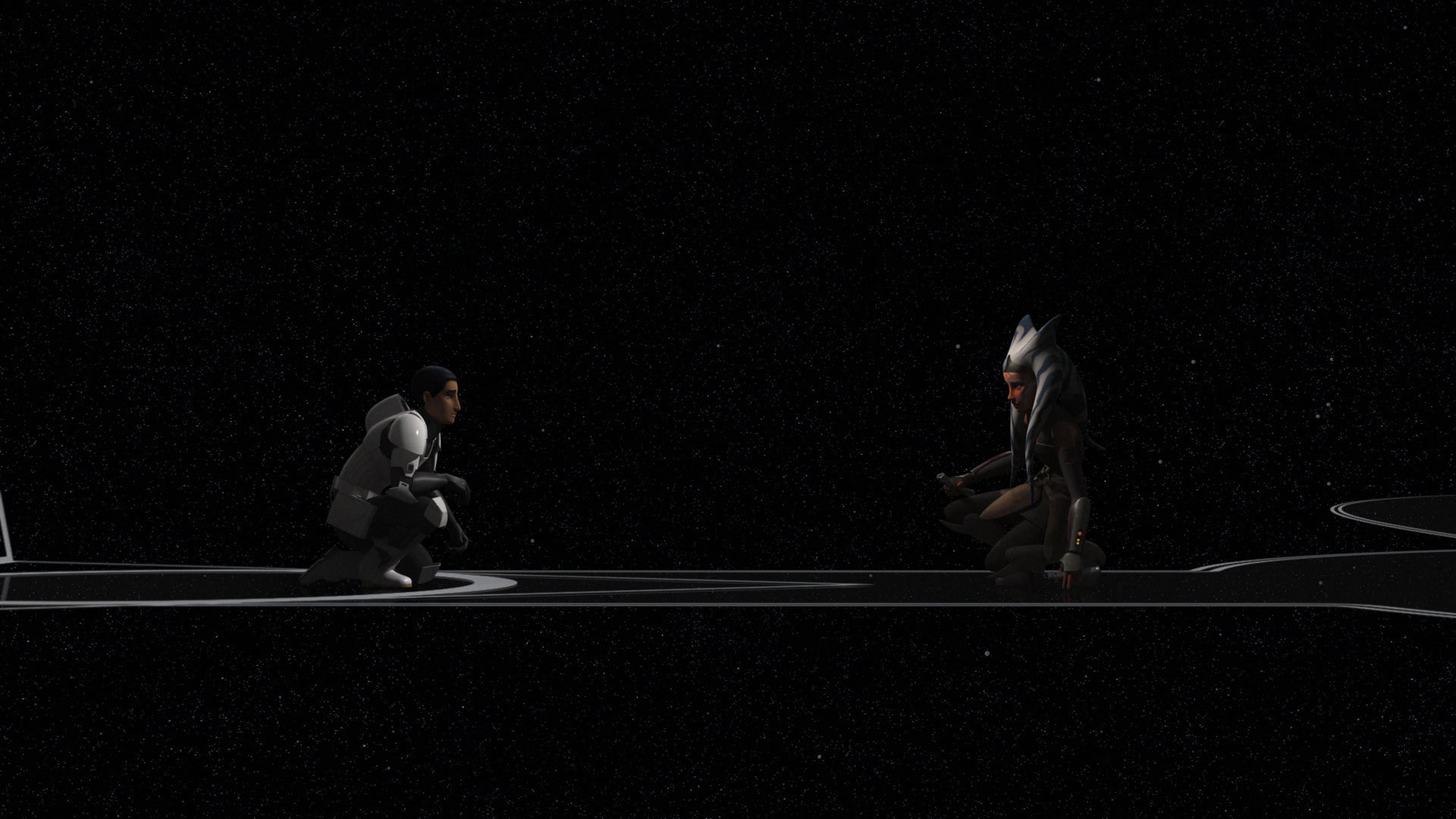 Into the Unknown Regions

In the World Between Worlds, Ahsoka guided Ezra and helped him understand his Master's sacrifice and the true path of selflessness. She then returned to her own time and promised to find Ezra again. After the young Padawan was lost in his final fight against the Empire, true to her word, Ahsoka returned to begin the search for her missing friend. 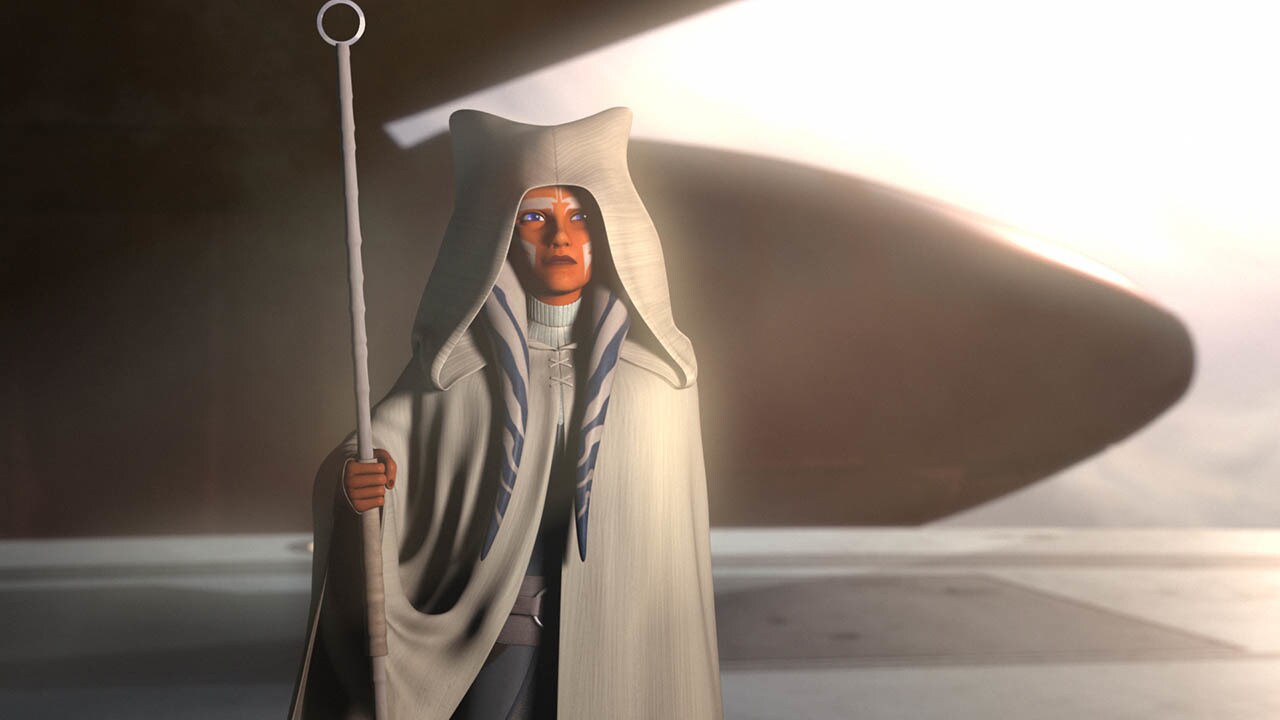 Where her path took her next remains a mystery, but no matter where it leads, we know Ahsoka Tano will face it with the wisdom, poise, and strength that she has learned from her teachers and the allies who have fought at her side.

Watch the final season of Star Wars: The Clone Wars on Disney+.