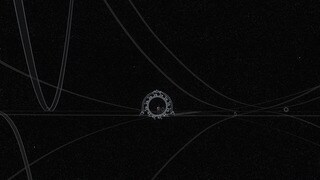 Behind the ancient painting of the Mortis gods on the Lothal Jedi Temple is a world between worlds -- a collections of pathways and doors between time and space. Uncovered by the Empire, the Emperor sought entrance, as access would grant him unimaginable power. But the Padawan, Ezra Bridger, found the key to unlocking the world between worlds first, and would ultimately thwart Palpatine's plans.