Check out some of the best in-jokes, references, and secret stuff hidden within the new Disney+ Original special.

Beaches and LEGO bricks -- what could be better for a summertime adventure? LEGO Star Wars Summer Vacation has arrived on Disney+, telling an all-new tale in which Finn and friends take a trip on the luxurious Halcyon starcruiser for a long-overdue break. As the journey begins, Finn becomes separated from the group and encounters the Force ghosts of three legends of the galaxy far, far away: Obi-Wan Kenobi, Anakin Skywalker, and Leia Organa. Their stories of summer teach Finn a valuable lesson, but these yarns also feature something else: enough Easter eggs to fill a spacecruiser! As such, StarWars.com scoured LEGO Star Wars Summer Vacation -- and even consulted with Lucasfilm’s Leland Chee, one of the creatives behind the original special, as well as writer/executive producer David Shayne -- to uncover as many in-jokes, story connections, and blink-and-you’ll-miss-it references as possible. Here are 20 of our favorites. 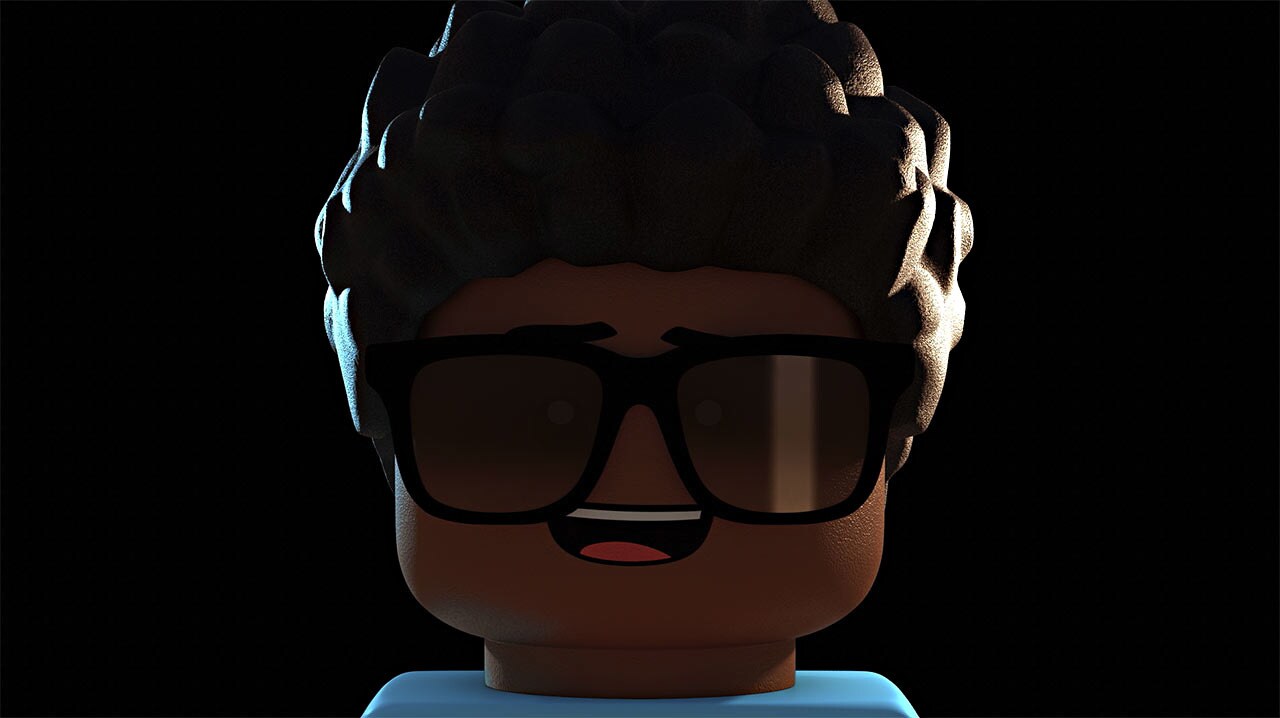 Easy there on that “skip intro” button, partner! You’ll miss Finn in LEGO Star Wars form, cleverly closing out the usual intro that plays before all Star Wars programming on Disney+. 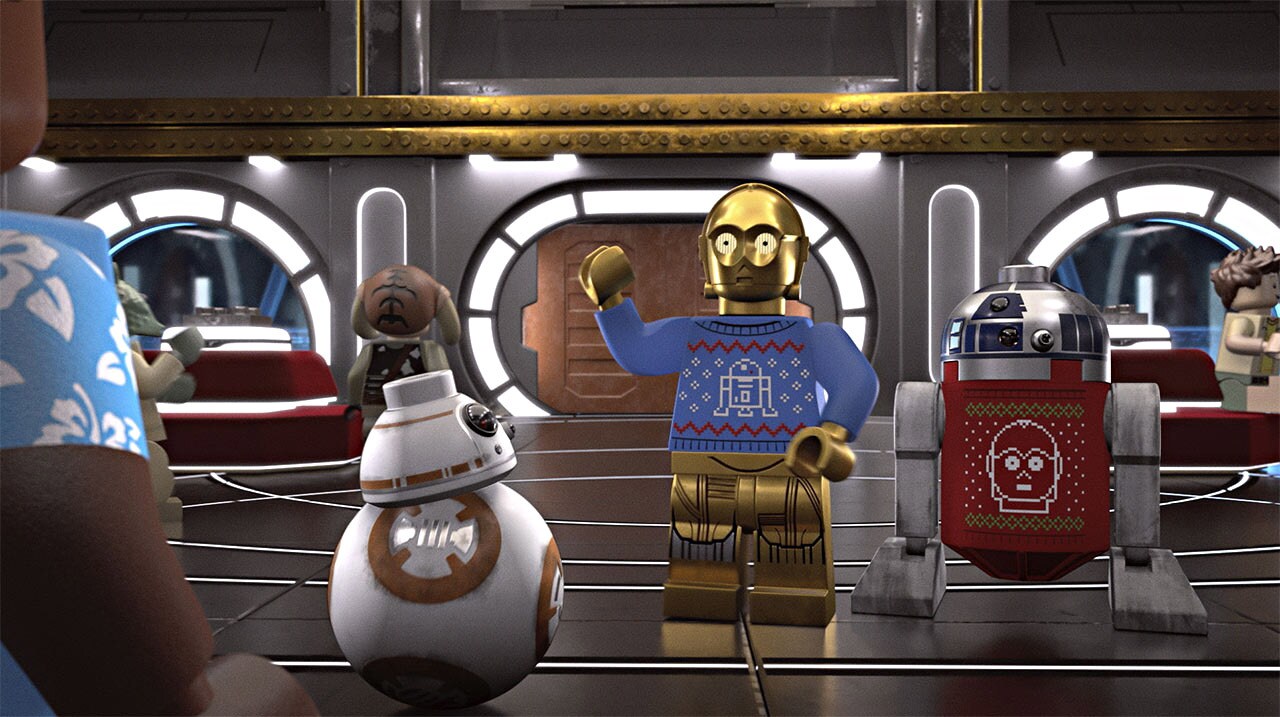 Consider this one a sneak peek: Artoo and Threepio’s wintery attire will match their minifigure appearance in this year's LEGO Star Wars Advent Calendar. 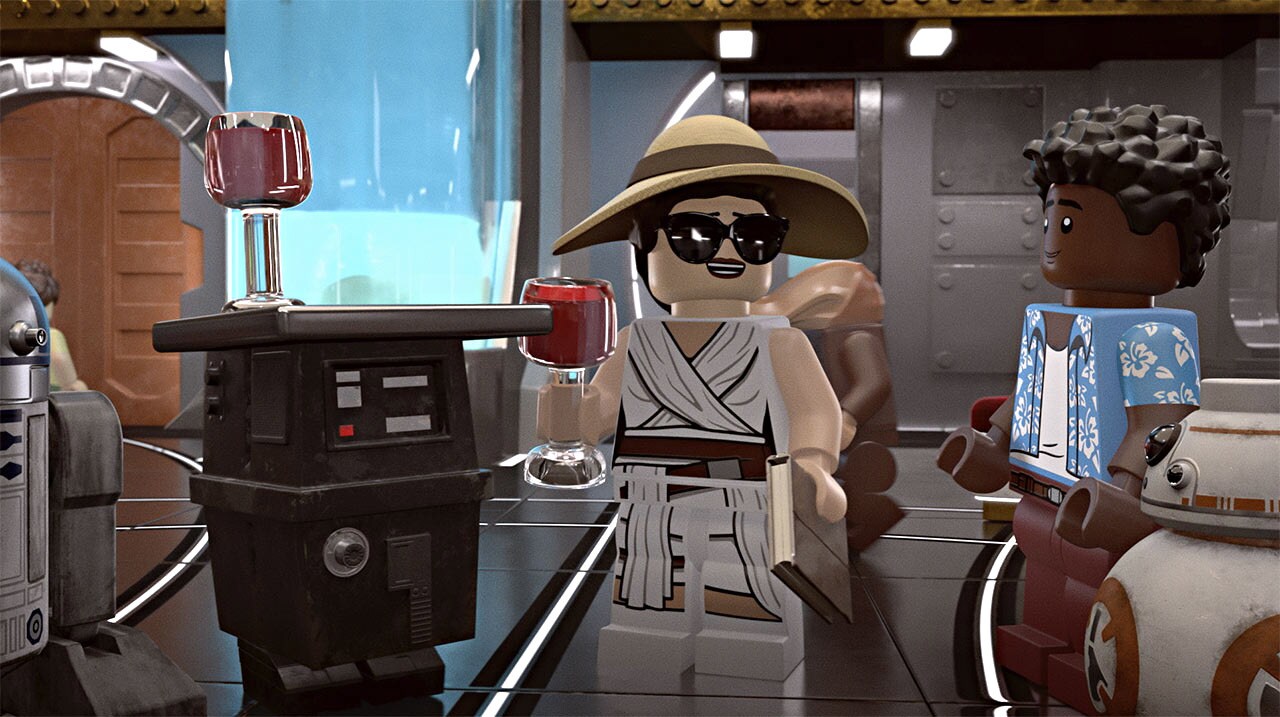 In something of a running gag, gonk droids can be seen carrying food and drinks throughout the special. Of course, as gonk droids have no arms, they’re basically balancing trays atop their “heads.” Not easy! 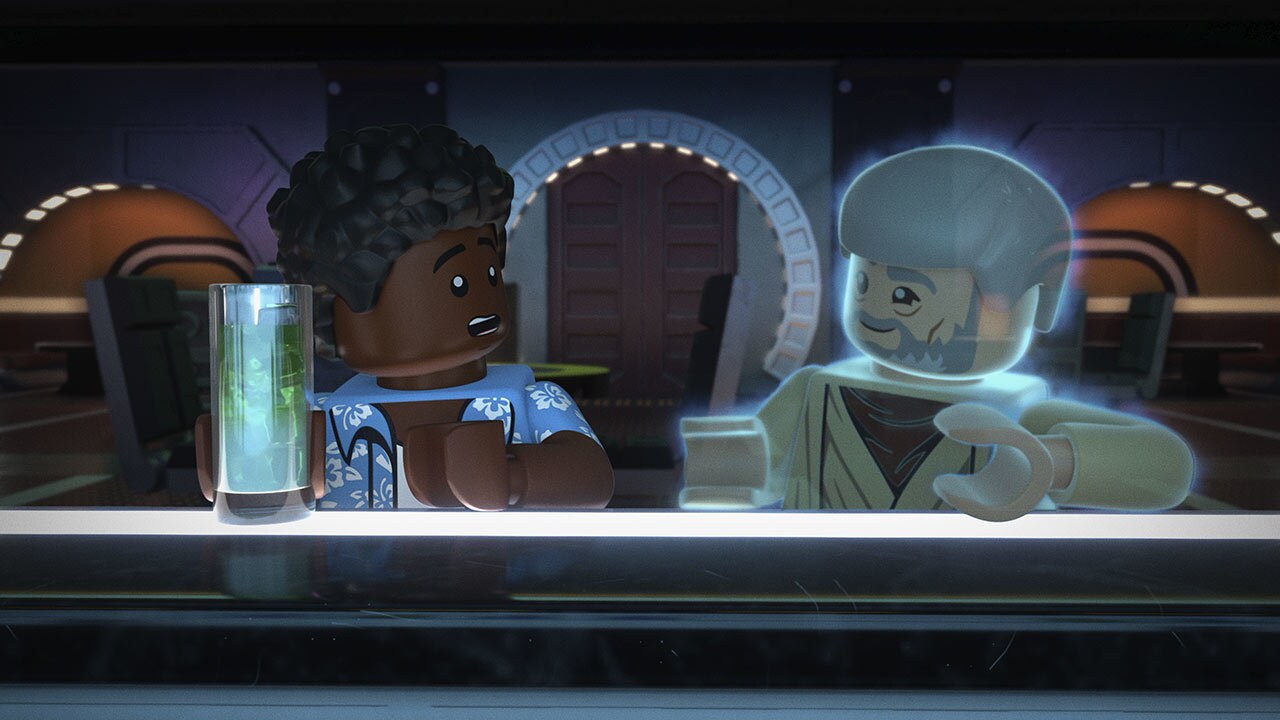 If you’d like to try Finn’s drink of choice, you’re in luck. It’s based on an actual beverage that you can order at Star Wars: Galactic Starcruiser called the "Yerdua Poison-Spitter Drop." 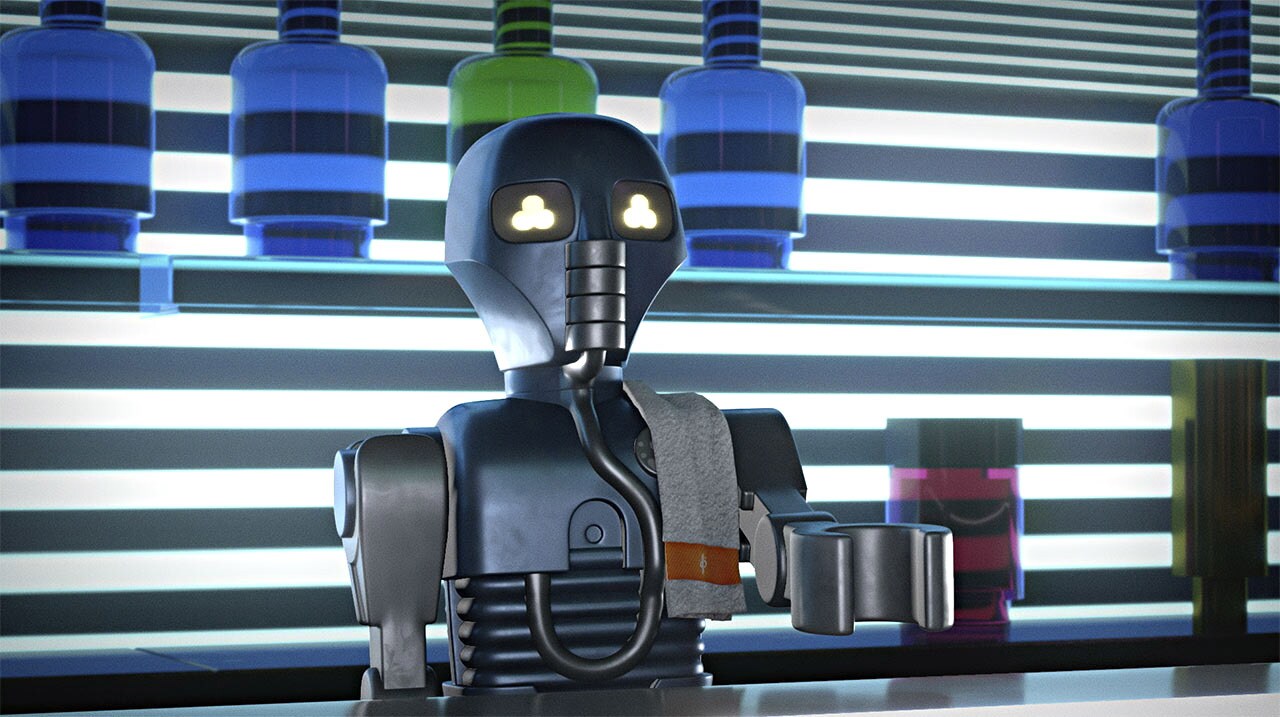 A play on C-3PO’s “human-cyborg relations” programming, the galactic libations droid’s moniker takes the joke one step further: it's name is BV-RJ, or “beverage.” 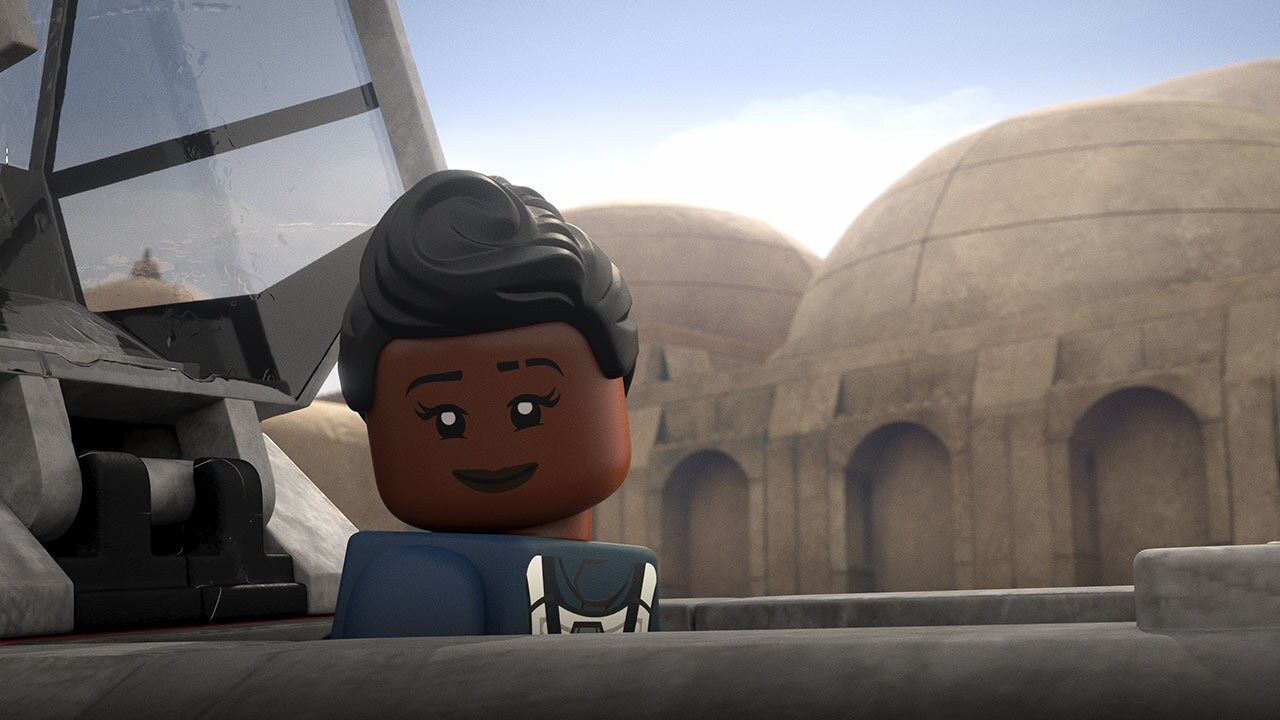 LEGO Star Wars: The Freemaker Adventures fans will recognize Lt. Valeria, who teams up with Obi-Wan in a tale from his time on Tatooine. But revealed here is her first name -- Colvett -- which comes from a mashup of voice actor Yvette Nicole Brown's first and middle names. 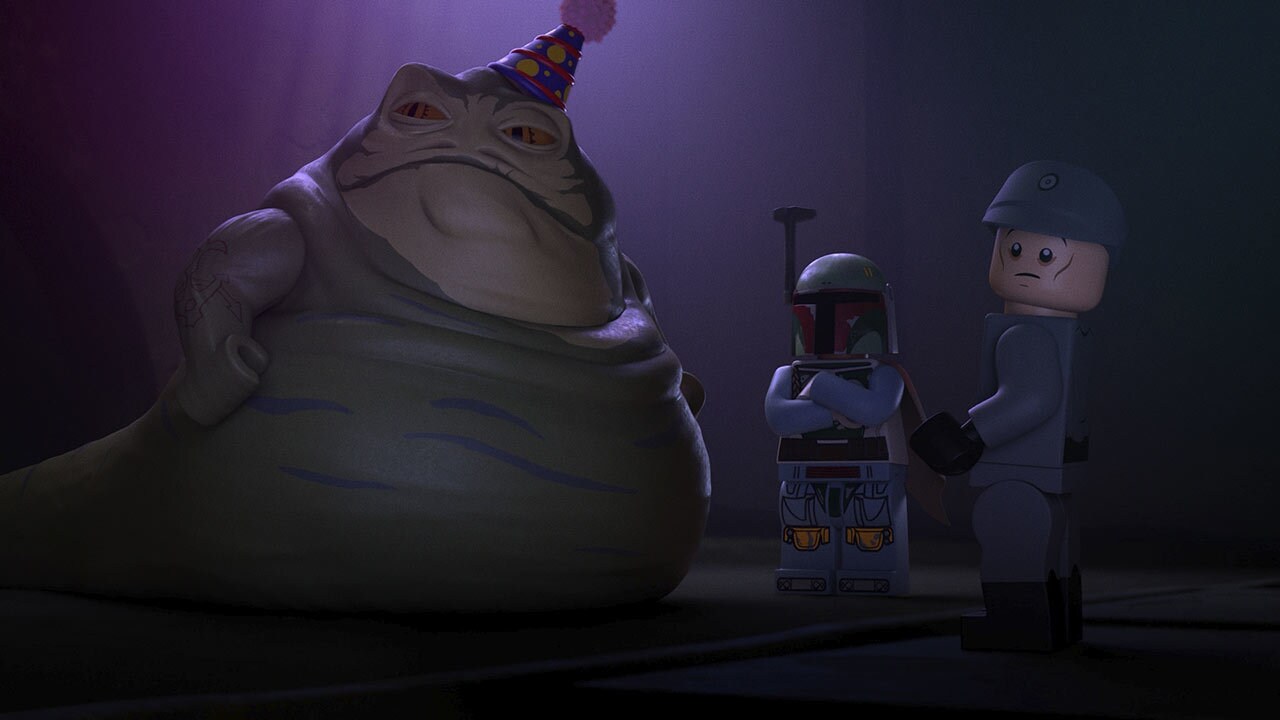 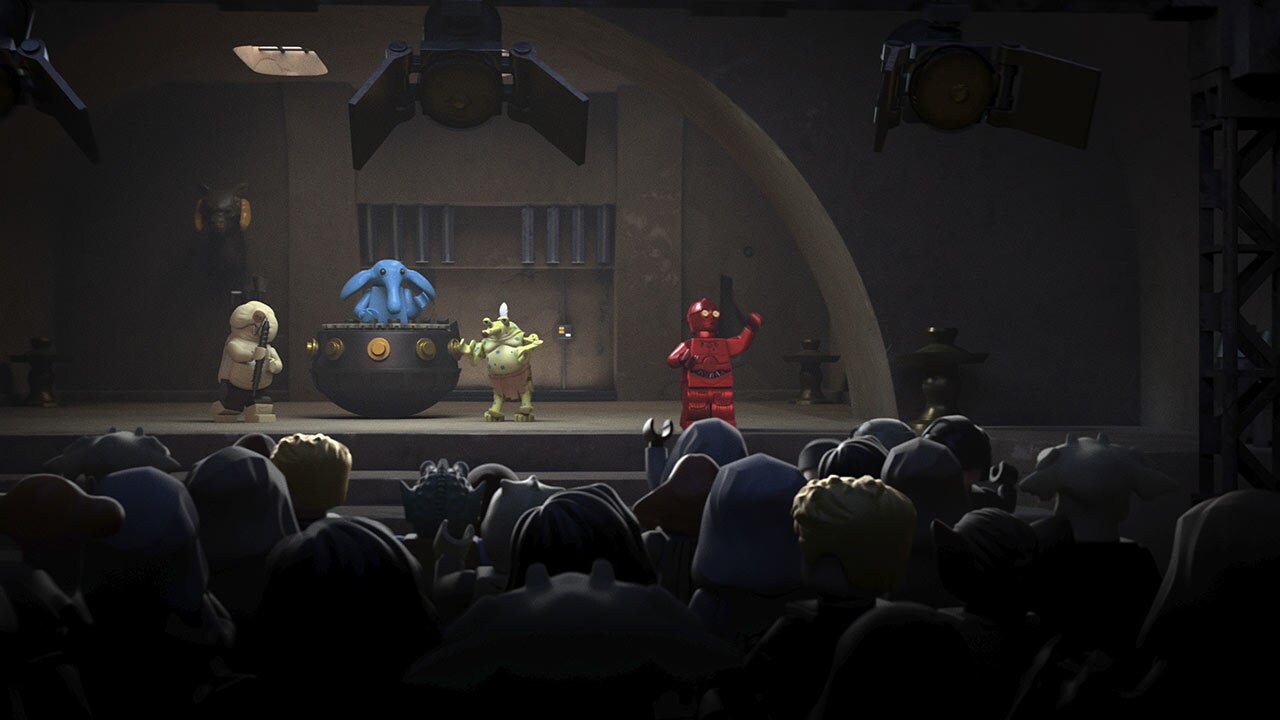 8. Some droids are programmed to rock.

Keep your eyes peeled on the crowd in Jabba’s palace and you’ll spot a crowd-surfing protocol droid. 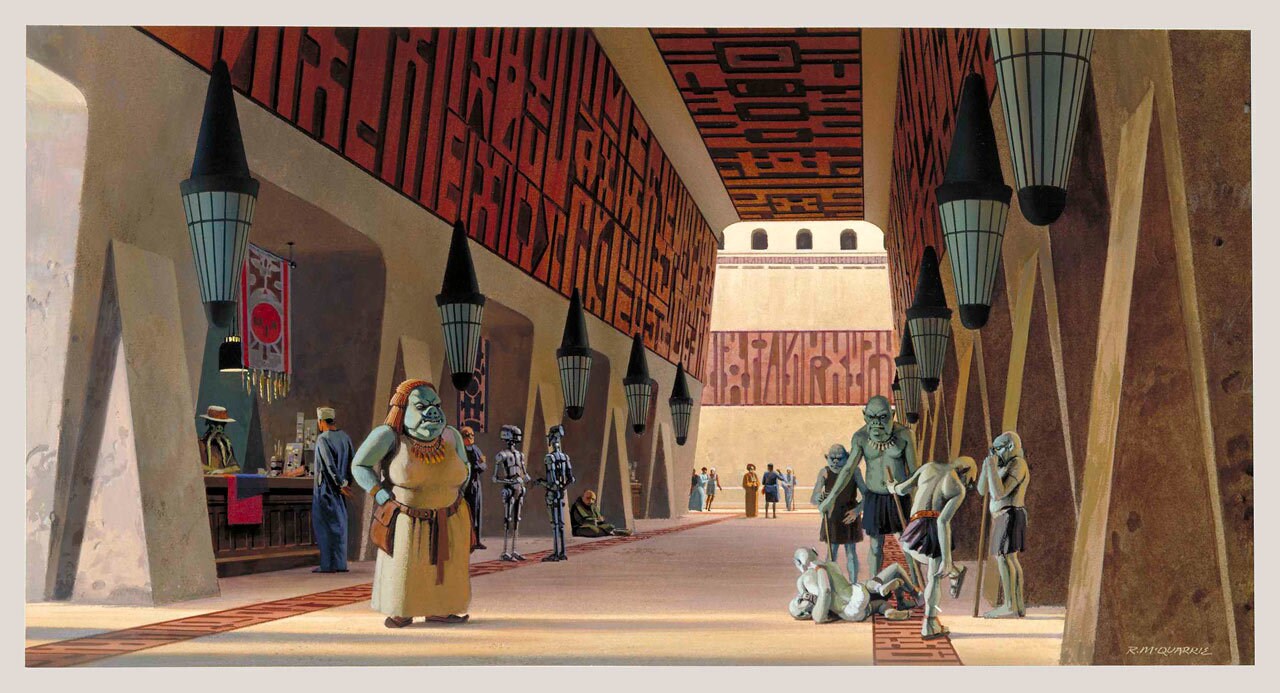 9. The design origins of Gamorrean girls.

“Gamorrean Girls” turns out to be a catchy summer tune, and the actual design of the Gamorrean girl at Jabba's party comes from an authentic source: art by legendary Star Wars concept artist Ralph McQuarrie. 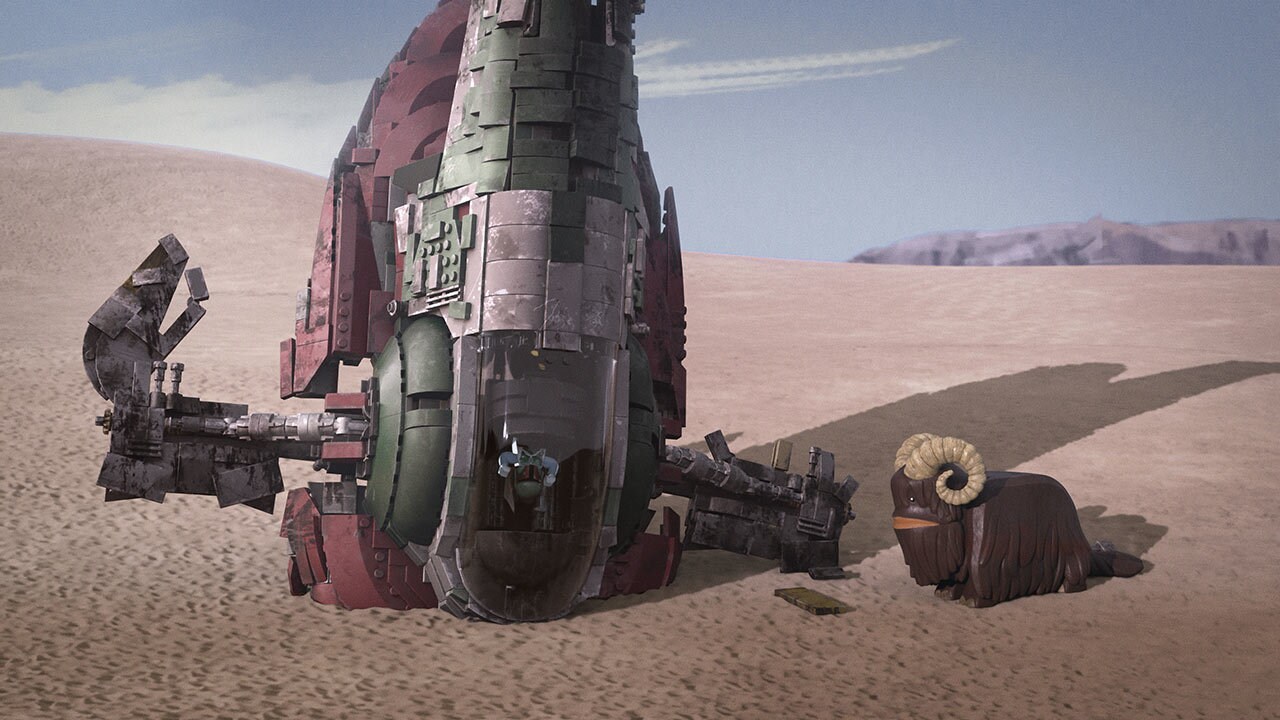 Hear that music cue when Boba swoops in to target Obi-Wan and Colvett? That’s his new theme from the season finale of The Book of Boba Fett, making its first appearance outside that series. 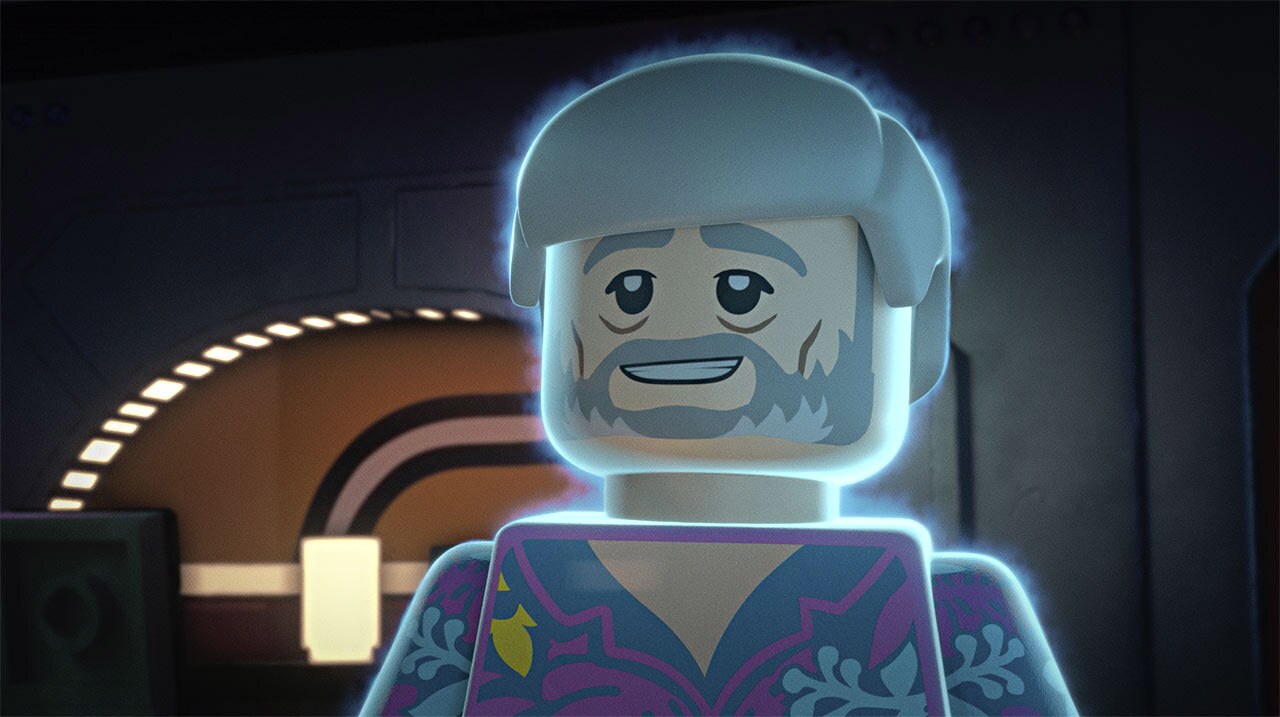 After his tale, Force ghost Obi-Wan makes an unannounced wardrobe change and can be seen wearing the same summer-themed shirt from his story. Even when you achieve immortality, you want to dress appropriately. 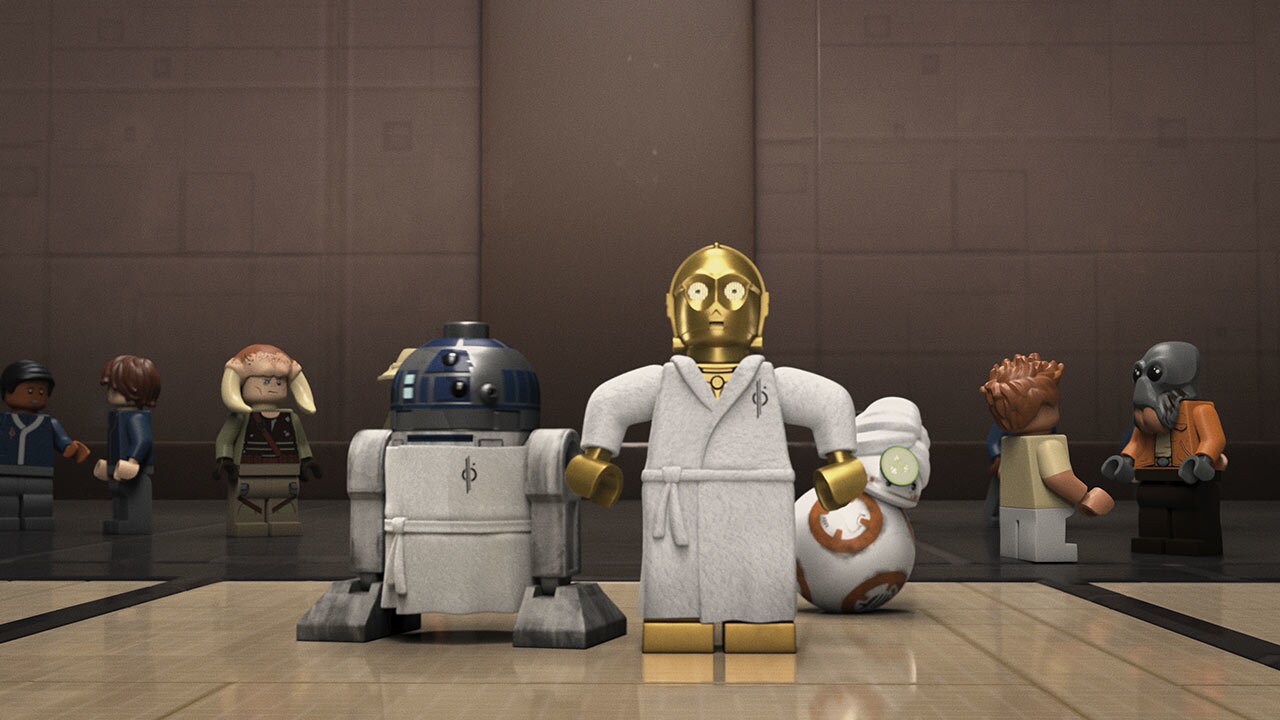 When R2-D2, C-3PO, and BB-8 emerge from the spa, they’re all sporting robes and towels with matching logos: the insignia of Chandrila Star Line, owners of the Halcyon starcruiser. This logo can also be seen at Star Wars: Galactic Starcruiser.

Bonus Easter egg: This sequence gets extra points for the cucumber slice BB-8 wears over his singular lens. 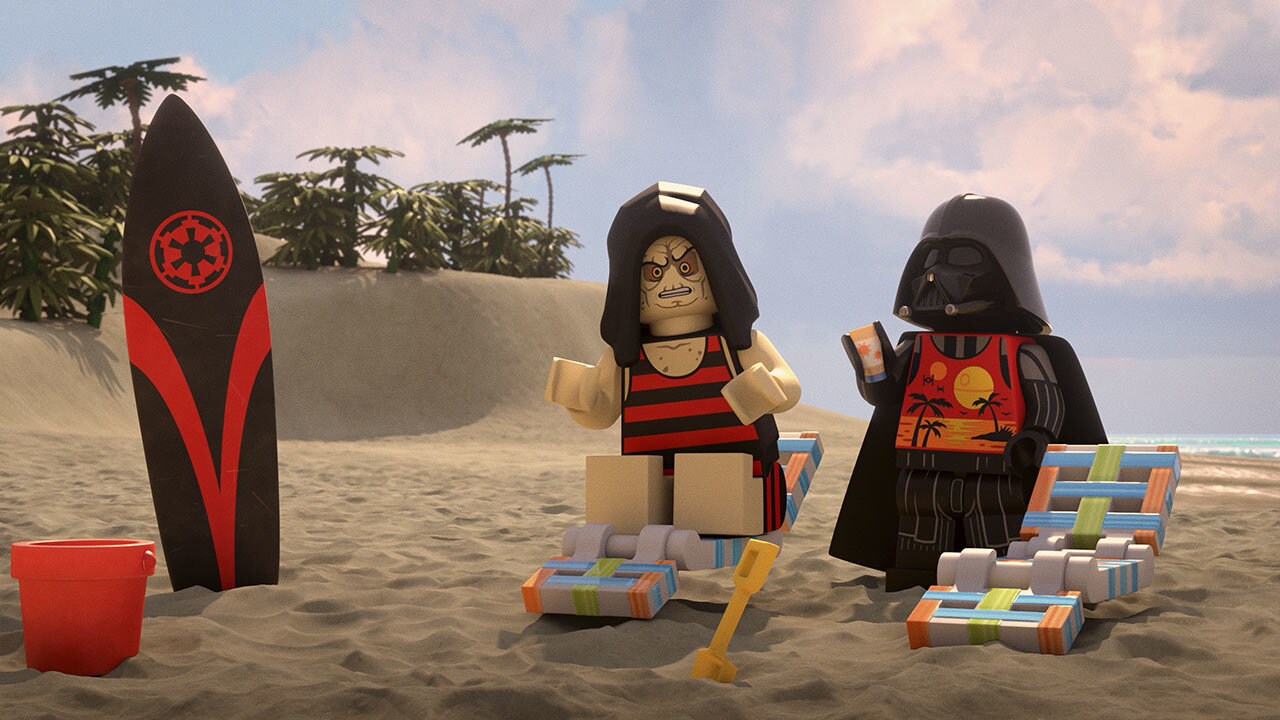 13. "Twin Suns," the only sunscreen that Sith Lords trust. 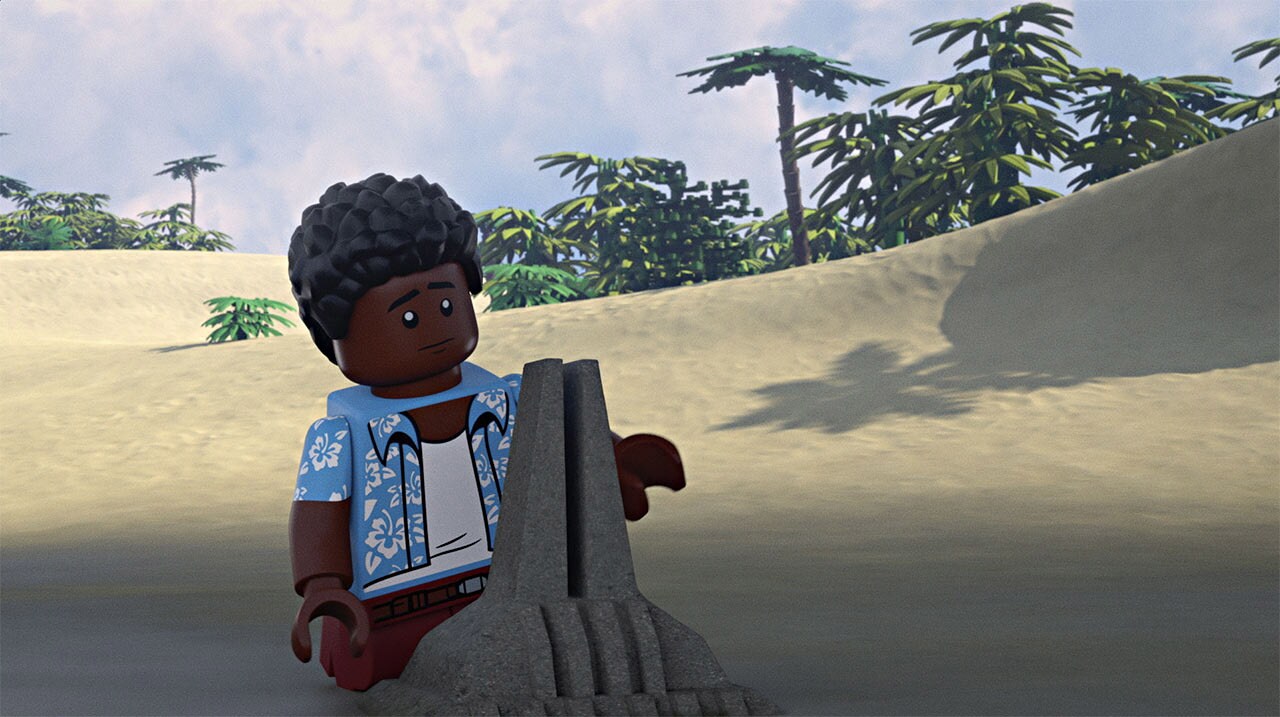 When Finn heads to the beach, he builds Darth Vader’s Mustafar castle. Most impressive, considering he didn’t even have a shovel. 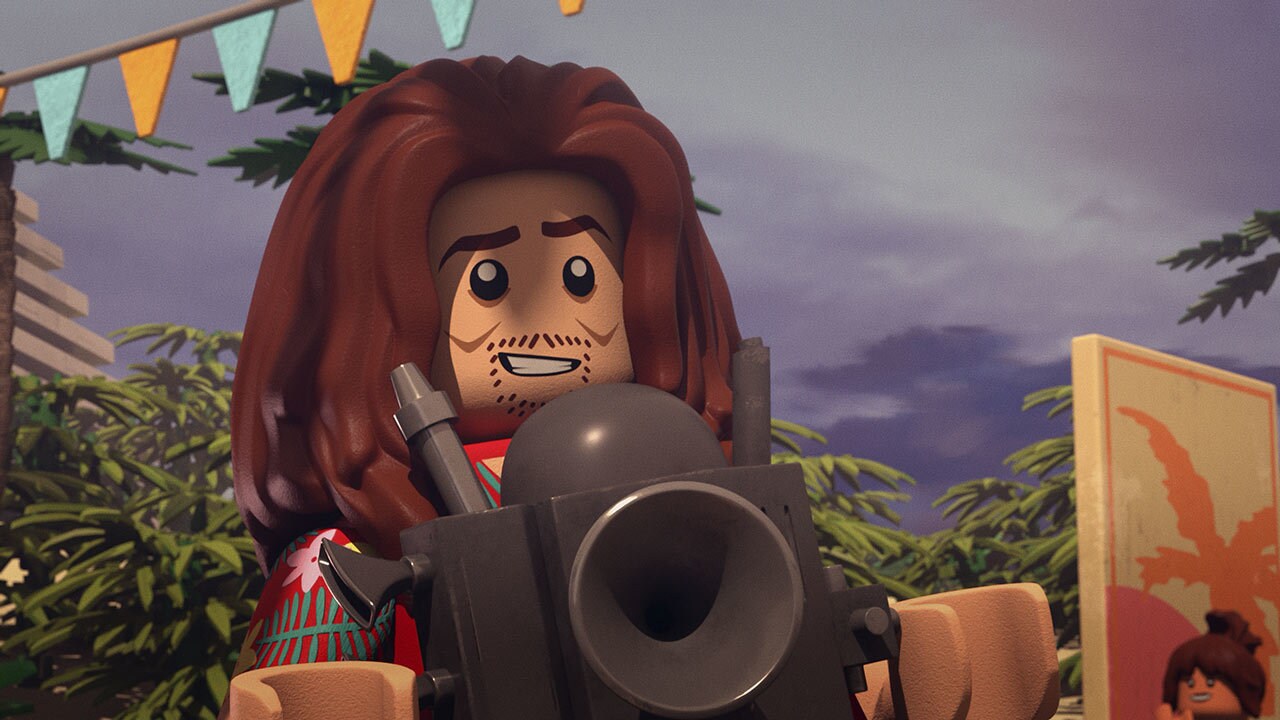 The song-parody great has his own history with Star Wars, including 1980's "Yoda" and 1999's “The Saga Begins." But as Vic Vankoh, he’s now officially part of the Star Wars galaxy -- and his character’s name takes inspiration from “Yankovic.” 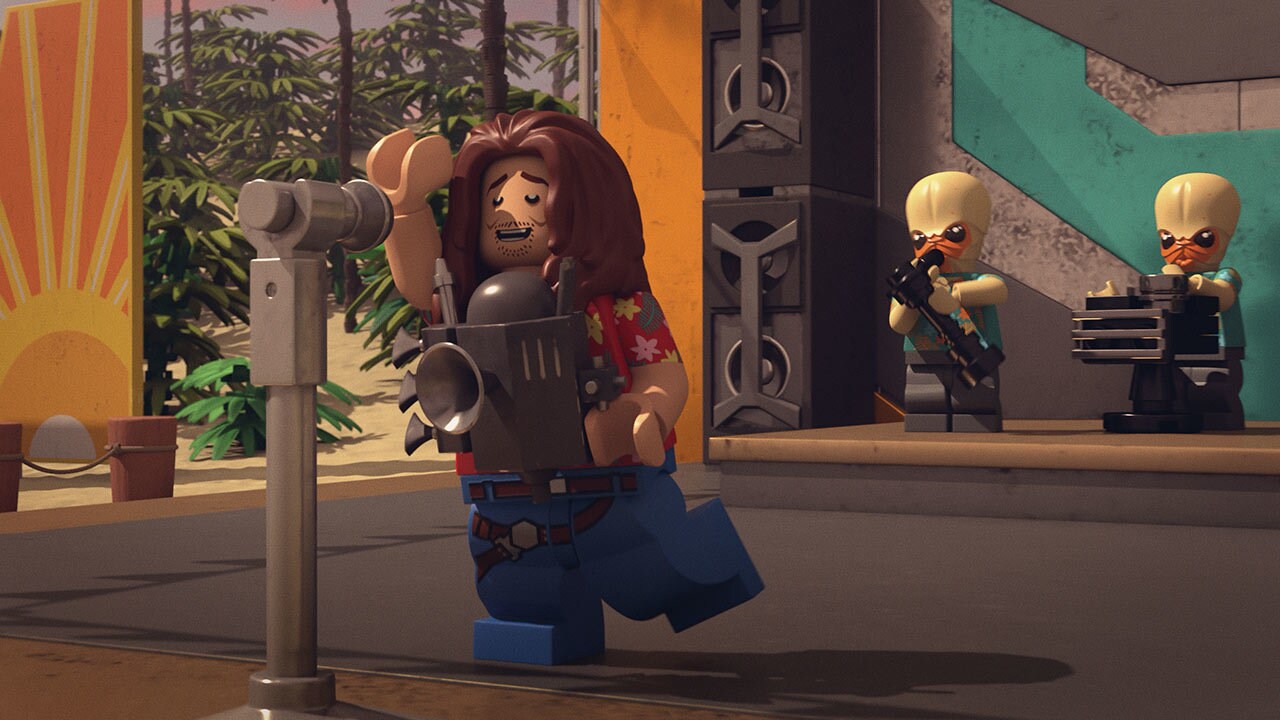 When Anakin shows up at the beach, he emerges from the water sporting scuba gear -- a nod to the regulator used to create Darth Vader’s breathing sound effect in Star Wars: A New Hope. (As to why a Force ghost needs scuba gear, we don't care. We just love it.) 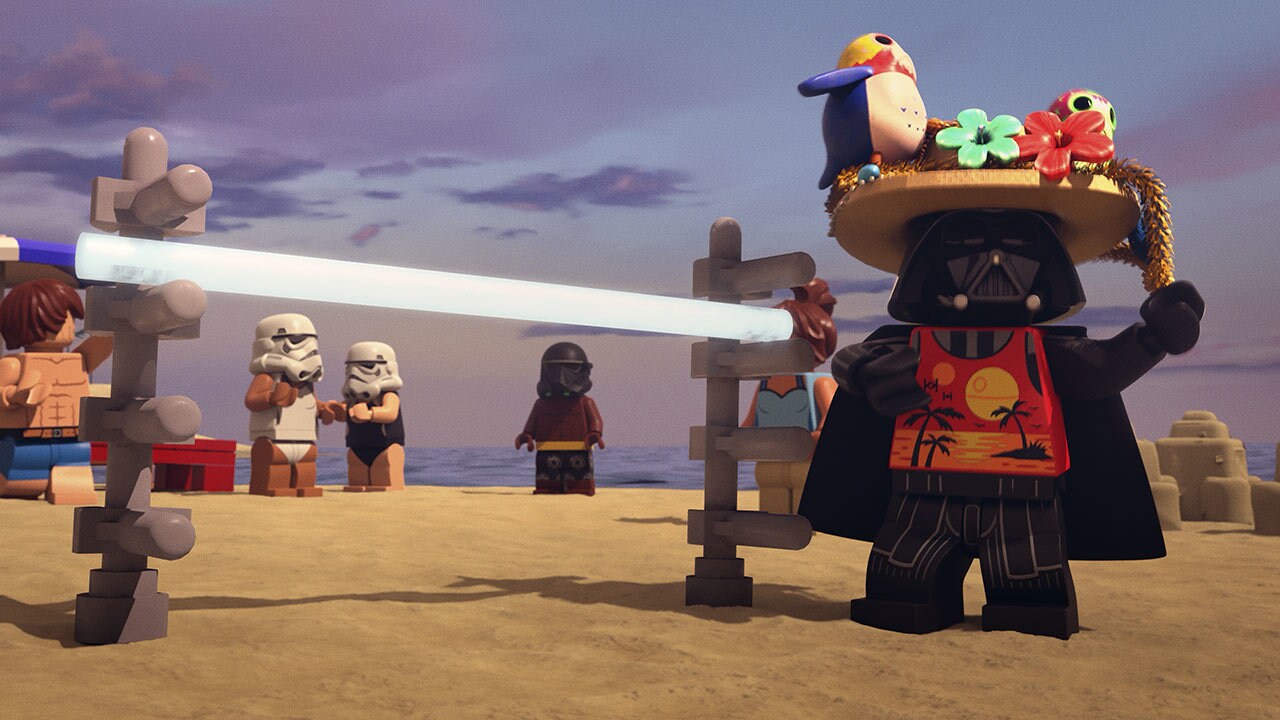 These colorful birds point to the possibility that different kinds of porgs -- first seen on Ahch-To island in Star Wars: The Last Jedi -- exist across the galaxy. Could there be Mustafar porgs? Hoth porgs? We have lots of questions. 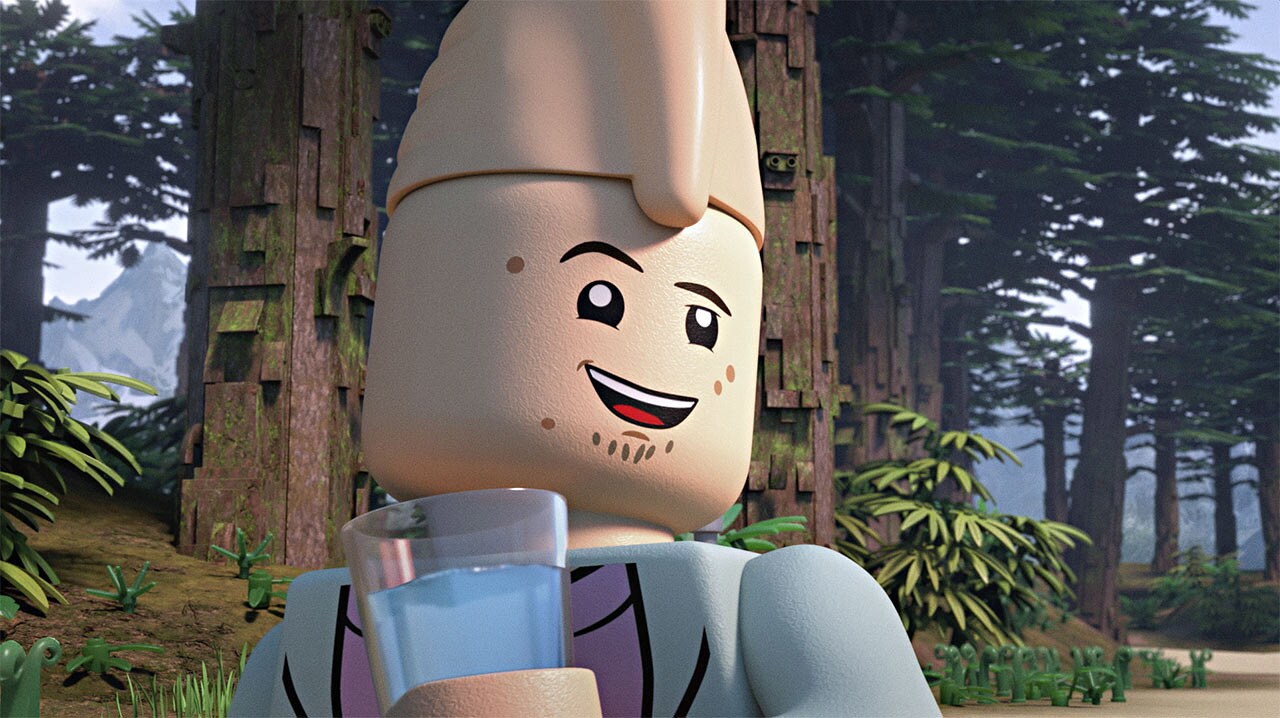 Ben Solo’s entire misadventure has an ‘80s movie vibe to it, but the obnoxious, makes-your-fists-clench Rad is directly inspired by the love-to-hate ‘em bullies of fare like Pretty in Pink, Karate Kid, and Back to the Future. Thankfully, like the antagonists of those stories, Rad gets his comeuppance.

Bonus fun fact: Rad is voiced by acclaimed comedian Paul F. Tompkins, who has previously played characters in Star Wars animation. But Tompkins’ first Star Wars appearance came in a live-action sketch for The Star Wars Show, produced by the StarWars.com team, in which he played a salesman hocking “toy Yodas.” 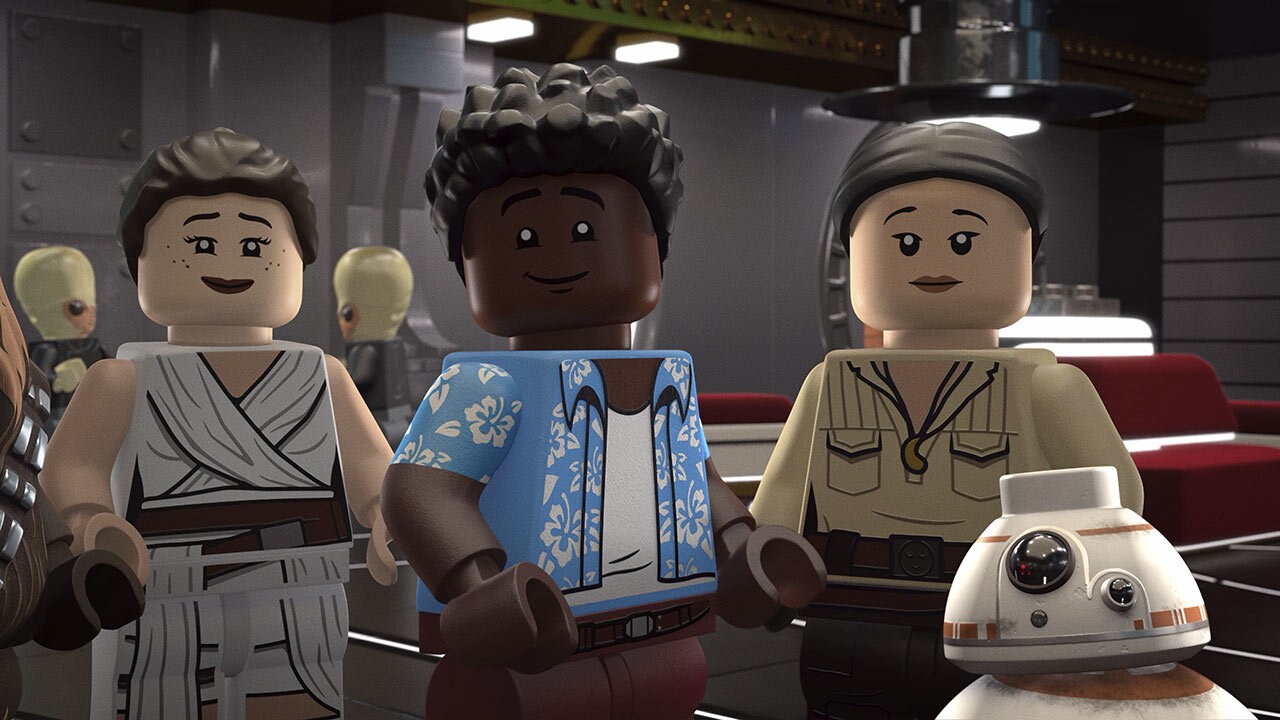 Kelly Marie Tran returned to her fan-favorite role of Rose Tico, even rerecording some of her dialogue from Star Wars: The Last Jedi. It’s good to have her back.