Begun The Clone Wars Have in Hasbro's Star Wars: The Black Series — Exclusive

Echo may have joined Clone Force 99 -- and will be among the elite crew in the new animated series Star Wars: The Bad Batch this Star Wars Day -- but when we first met him he was just one of the "regs" who ultimately rose up to join the esteemed ARC troopers.

In celebration of Lucasfilm's 50th anniversary this year, ARC Trooper Echo will join Hasbro's The Black Series in a new line celebrating the original run of the Star Wars: The Clone Wars animated series. The sculpt -- a first for the line -- also happens to be associate product designer Eric Franer's favorite. "He is such a great figure with so much fantastic detail," Franer tells StarWars.com. "It’s also just exciting to finally have an ARC Trooper in the line. It’s been a figure we’ve needed in the line for a long time, so his addition is long overdue!" 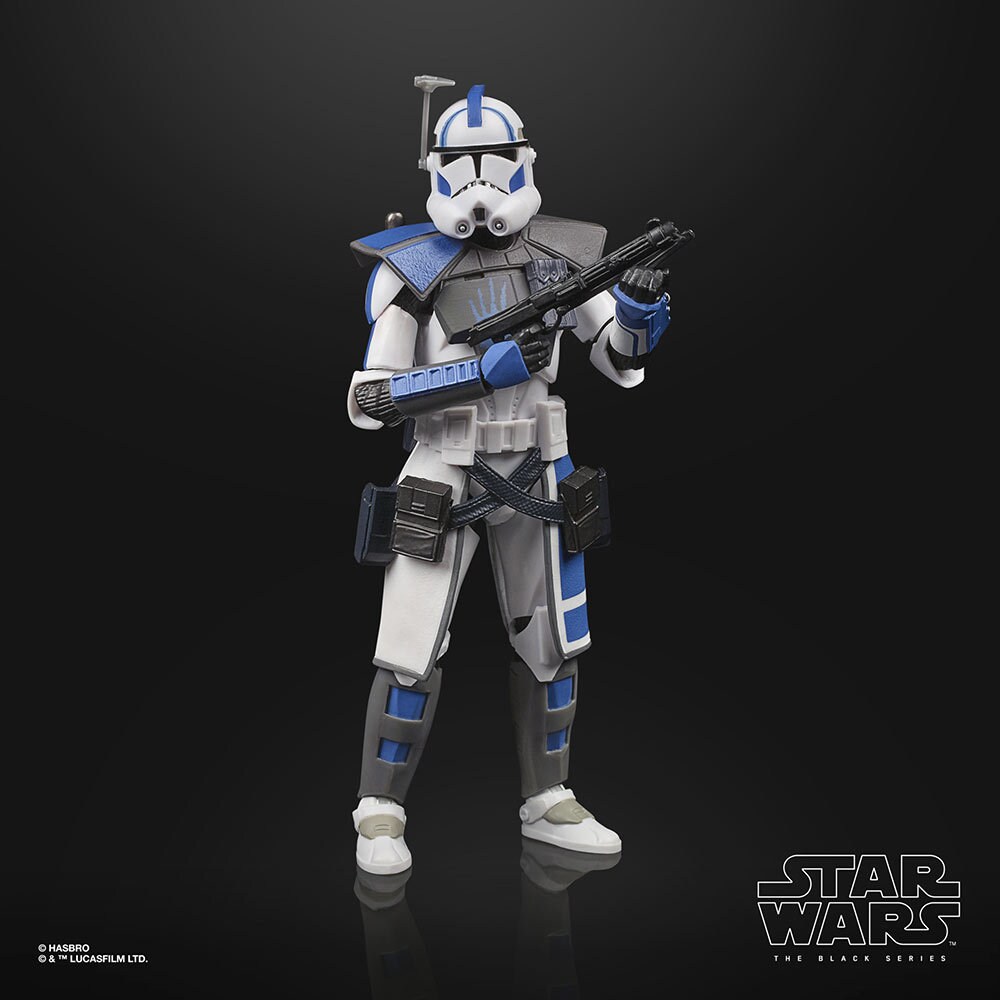 Today, StarWars.com is pleased to reveal ARC Trooper Echo and the three other new figures headed to the Black Series line and exclusively available at Target: Anakin Skywalker, Obi-Wan Kenobi, and Clone Pilot Hawk. Recently, Franer sat down to talk about the challenges of updating young Skywalker's look and the joy in recreating the 3.75-inch packaging with the original illustrations that graced store shelves more than a decade ago. 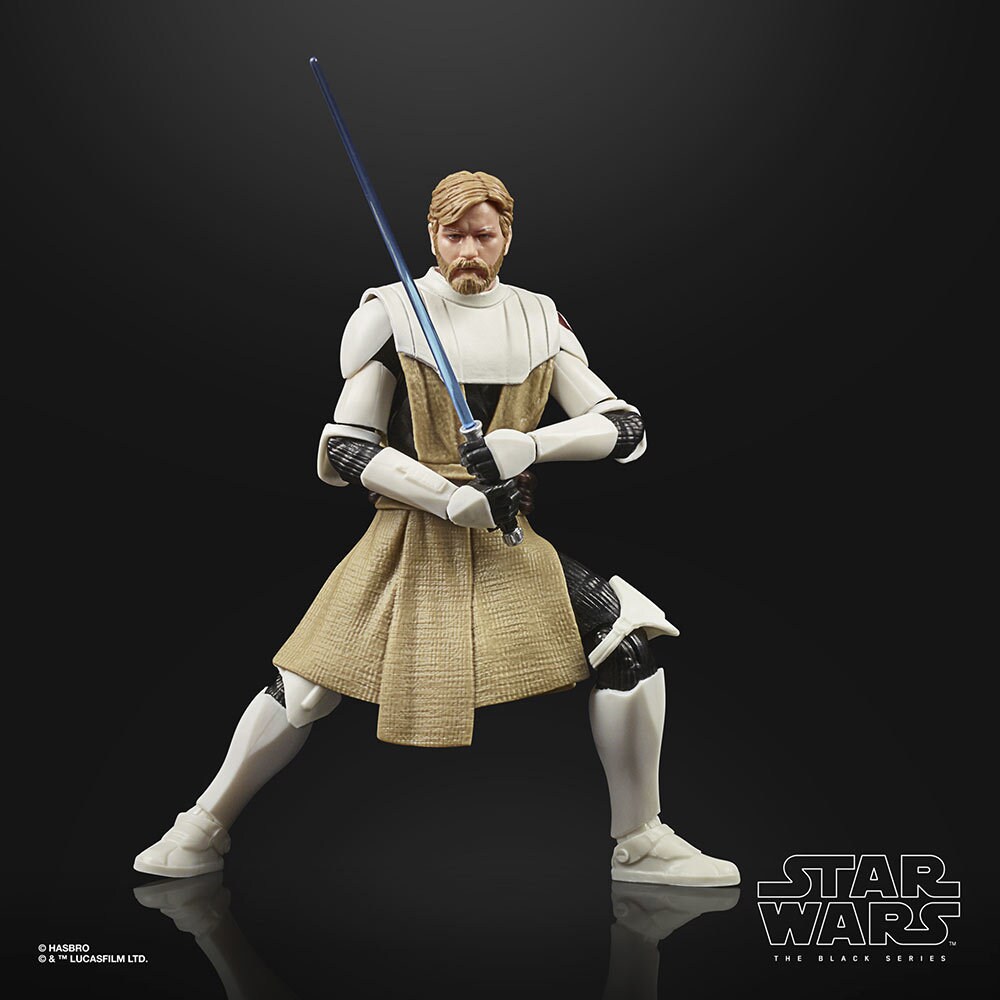 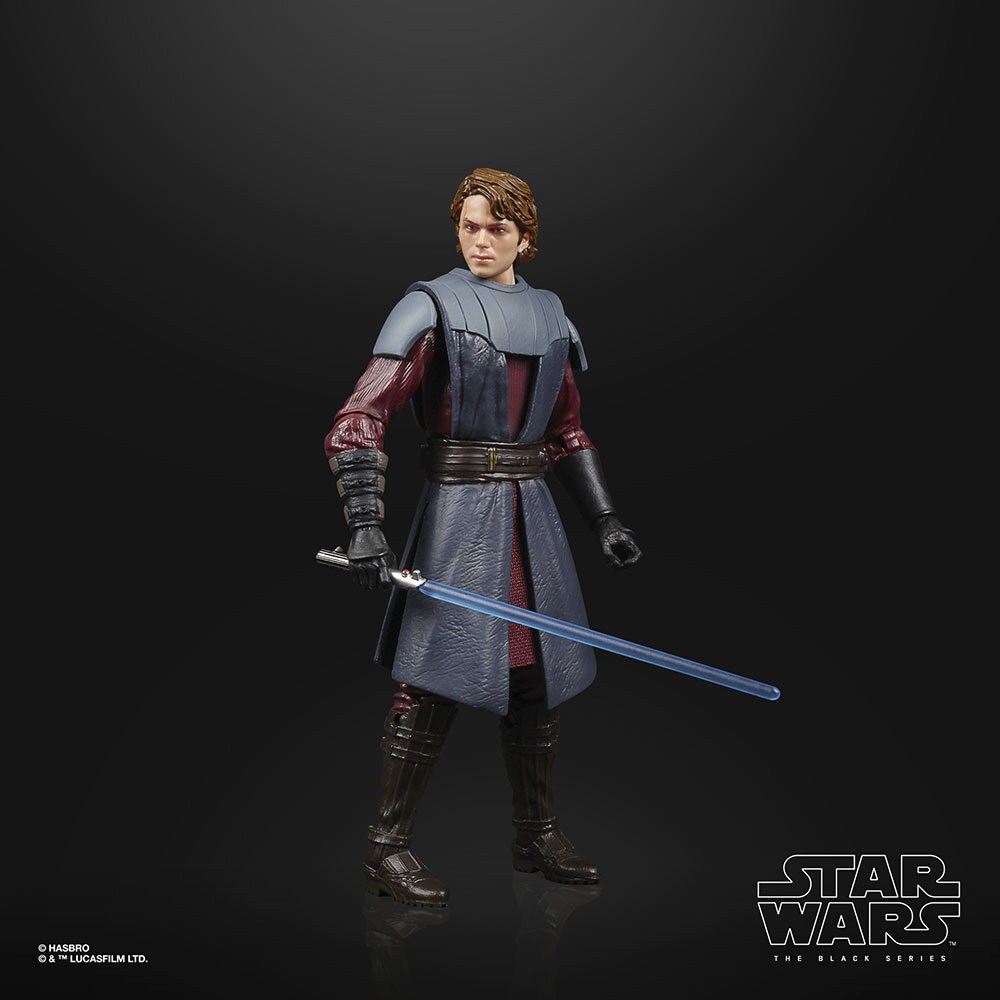 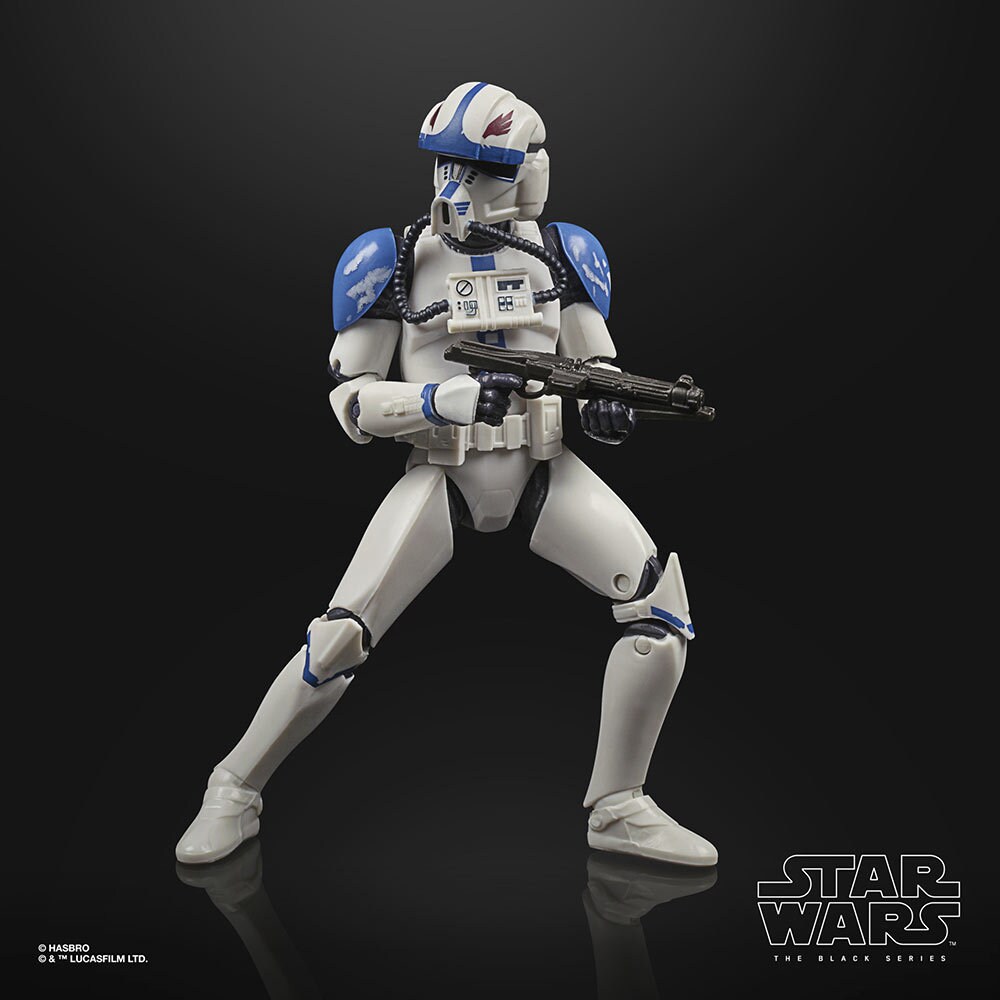 StarWars.com: What made you choose these four characters in particular to bring into the 6-inch Black Series line to represent The Clone Wars for the 50th anniversary of Lucasfilm?

Eric Franer: Obi-Wan and Anakin are [some of] the main characters, so we felt it was very important to bring them into the line, specifically in their clone armor. After considering those two characters, an ARC Trooper Echo was also another pivotal piece for the line; it’s great that this line allowed us to finally have an ARC Trooper sculpt in the Black Series! With these characters selected, Clone Pilot Hawk made a great addition to the line. Hawk is a such a unique character and, as a member of the 501st, is a great companion to both the ARC Trooper Echo and Anakin figures.

StarWars.com: The packaging is a really nice touch! Were you looking at the original 3.75-inch figures from this line for inspiration beyond the card back? 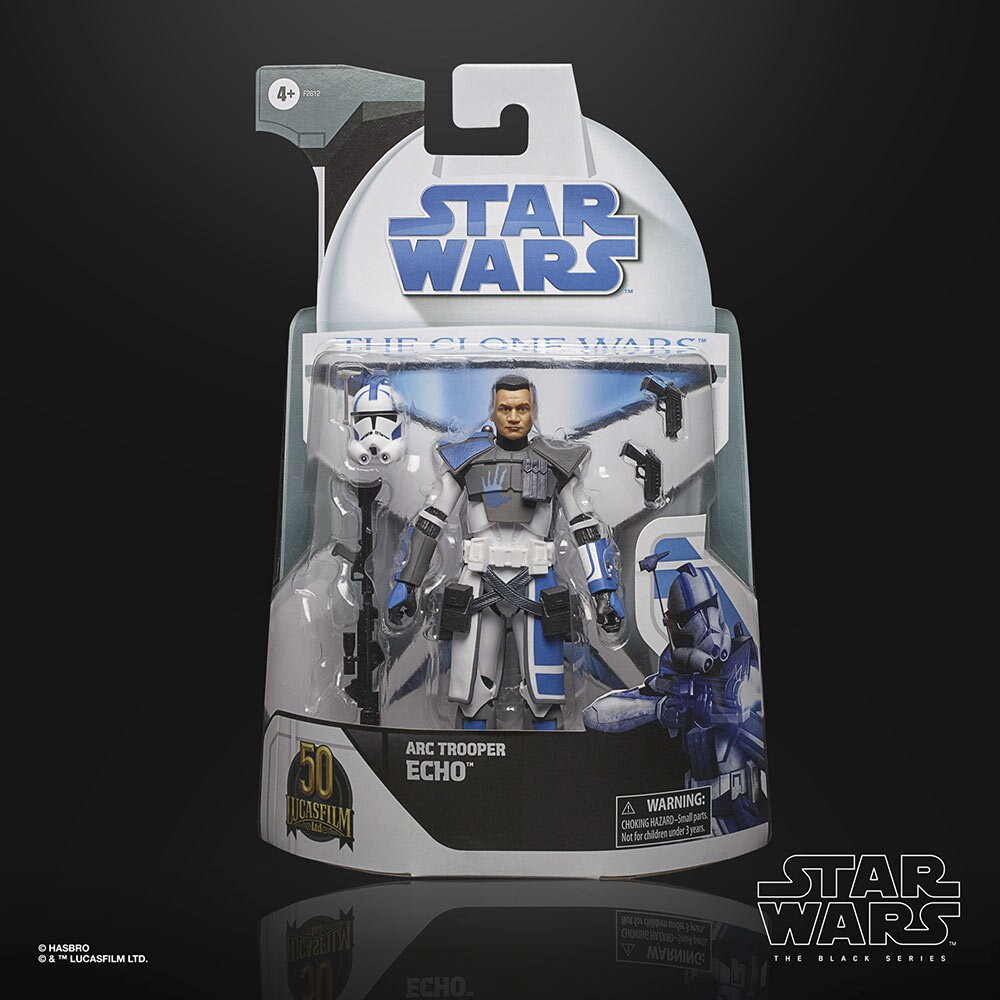 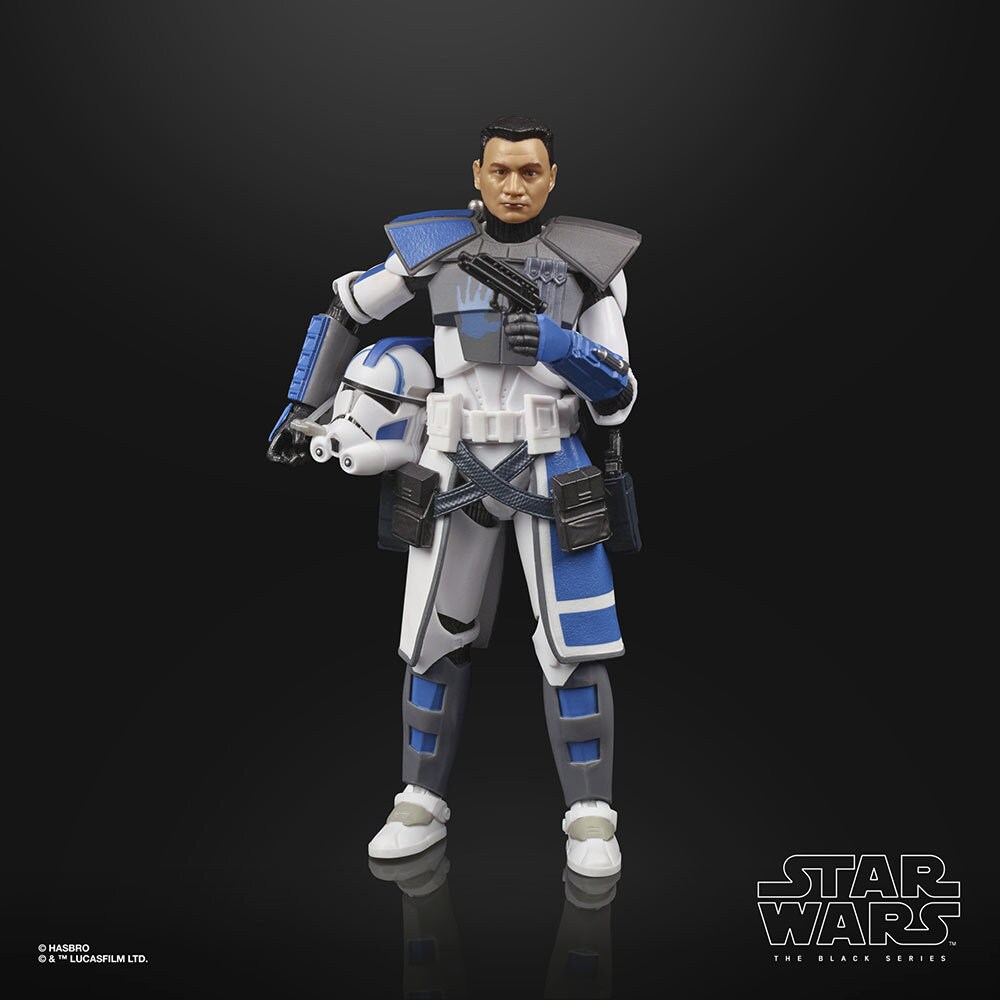 StarWars.com: ARC Trooper Echo is breaking my heart. You captured a stunning likeness from the pre-Season 7 episodes of the animated series. How does this figure differ from the other Clone Troopers that have come before it in this line?

Eric Franer: This is a great update to our existing Clone Trooper and is our first time adding the ARC Trooper armor to the Black Series. The figure comes with a new helmet with view finder, pauldron and chest details, skirt, forearms, and shins to make it accurate to the ARC Trooper [armor seen in the series]. Our sculptors did a fantastic job! 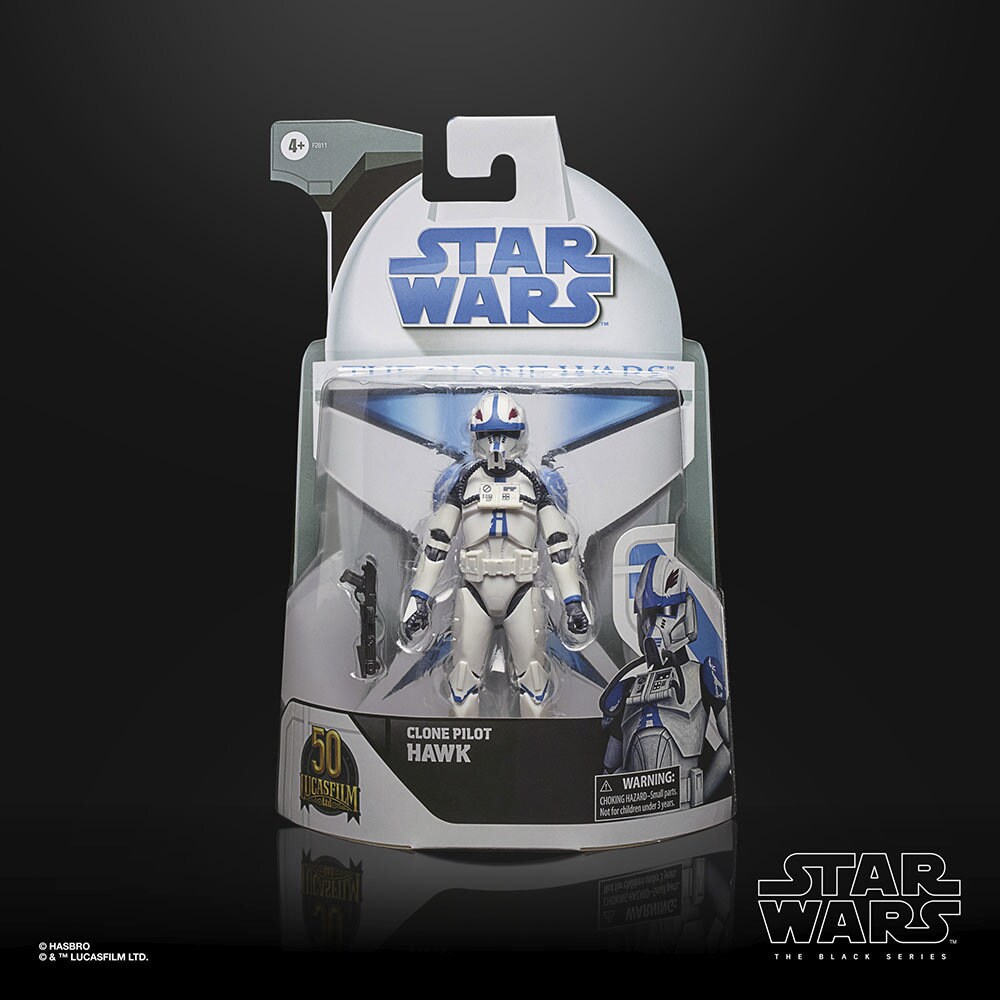 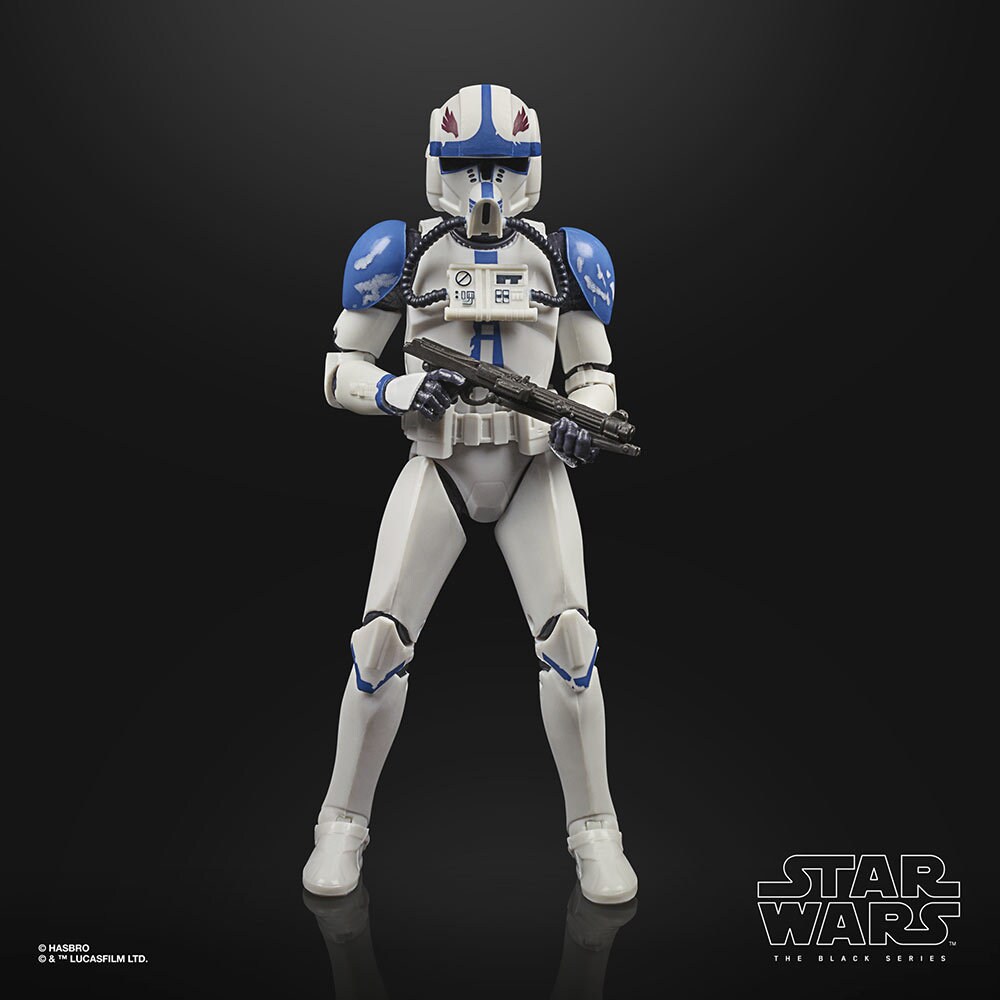 StarWars.com: Clone Pilot Hawk has a wonderfully unique helmet design. What challenges did you run into translating the animated style for the character's gear into an action figure?

Eric Franer: One thing we wanted to do was make sure that the helmet was the proper size. Since it has such a unique design that can interfere with real world anatomy of a figure, the helmet isn’t removable, but we made sure that the helmet’s scale would stay consistent with the rest of the Black Series line. 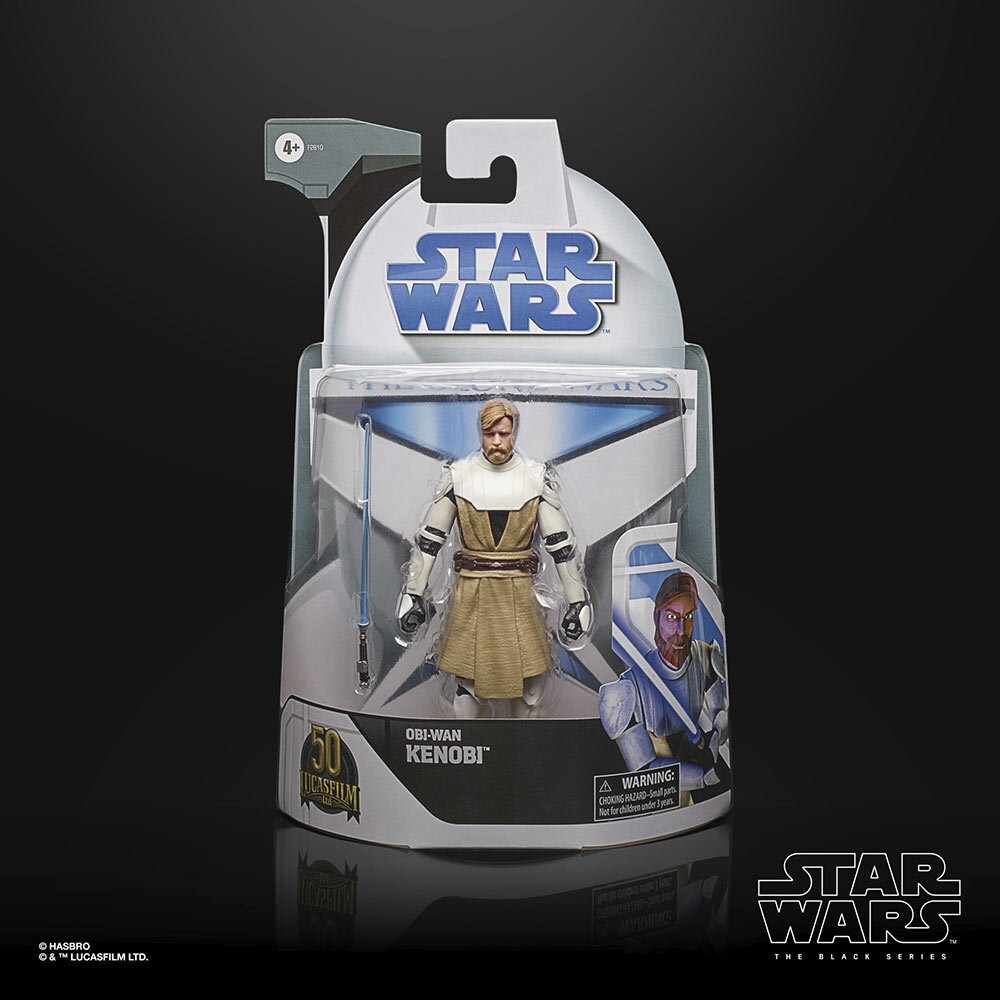 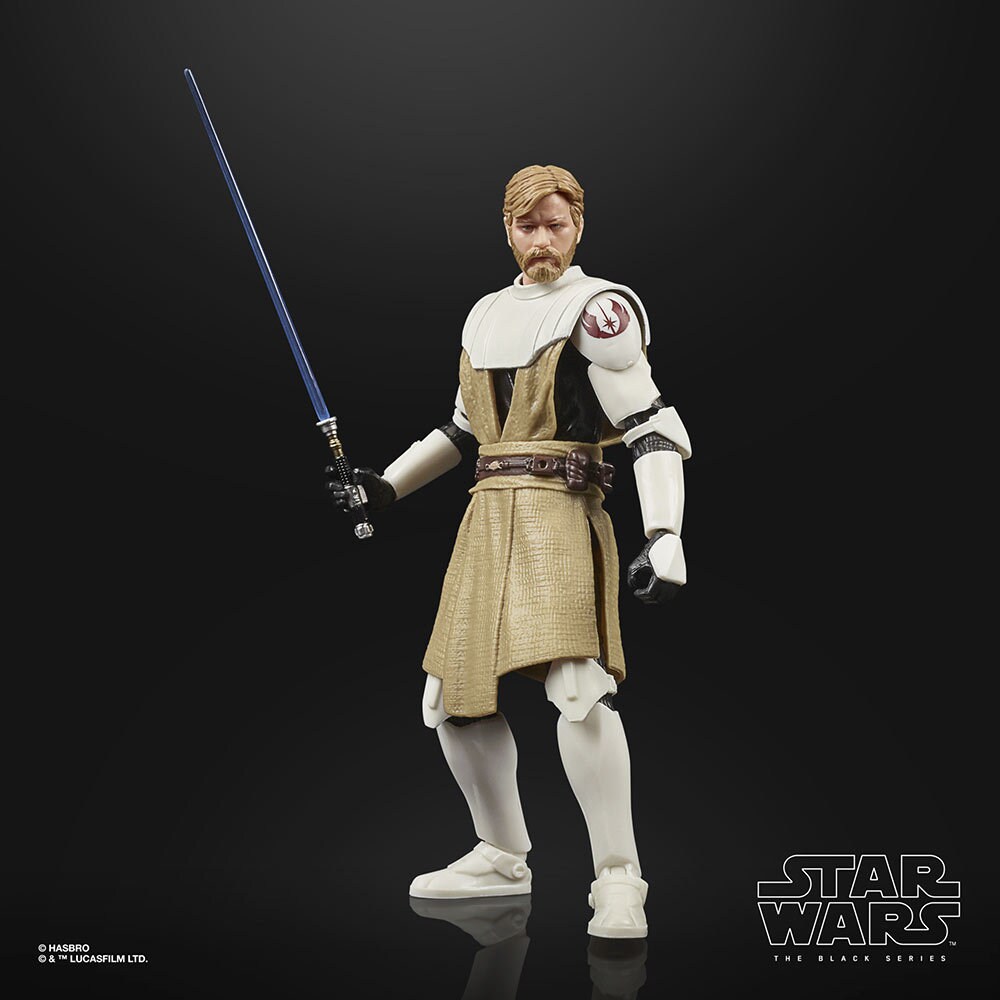 StarWars.com: Hello there, General Kenobi. We've seen Clone Commander Obi-Wan in this series previously as a Walgreens exclusive. But this one appears to be sporting a new Photo Real deco and new armor from his appearance in The Clone Wars film and animated series. Why did you choose this particular version of Kenobi and why doesn't he come with a tiny tea cup?!

Eric Franer: The previous Clone Commander Obi-Wan figure was inspired by the Genndy Tartakovsky's Clone Wars [2D micro series]. It was a great figure, but we felt like it was important to get this clone armor version from The Clone Wars into the line. And since we were planning on including an Anakin figure, it was a great pairing to have the two together as they appeared in The Clone Wars. The tiny tea cup would be a funny and great addition though! 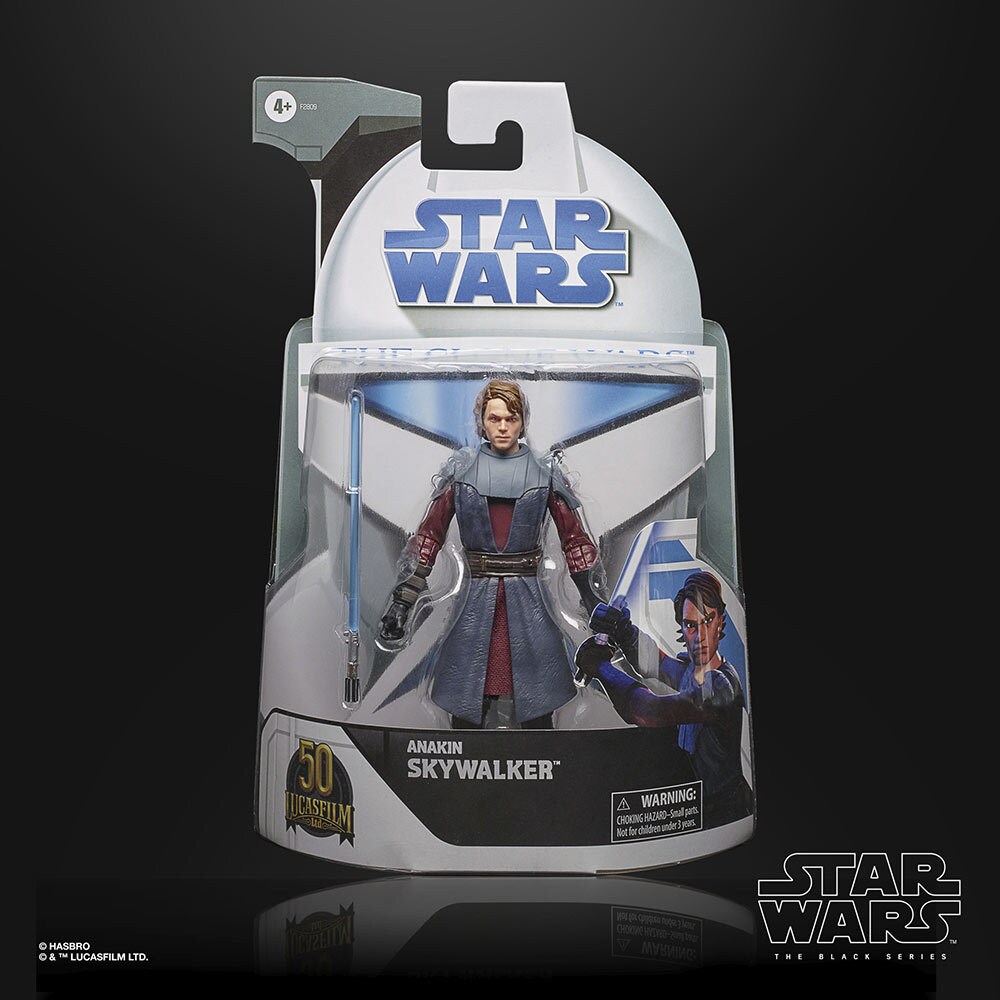 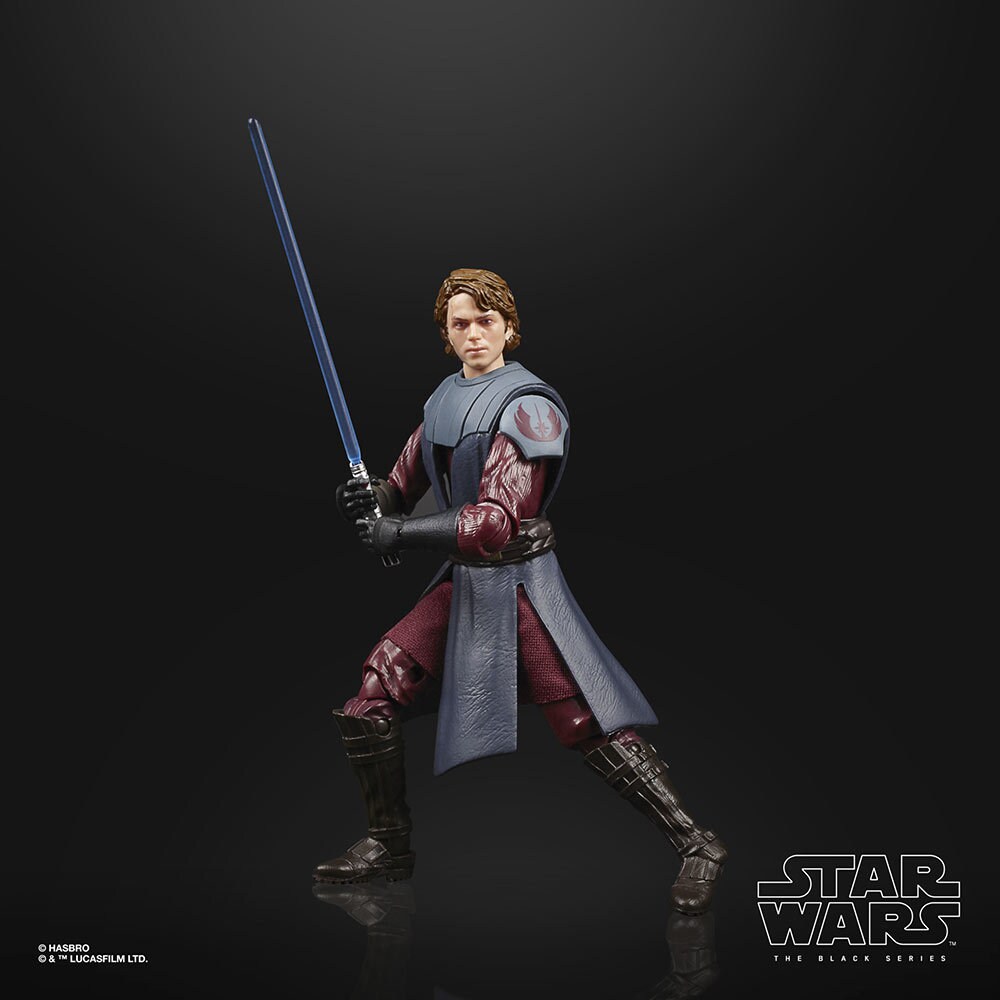 StarWars.com: The head sculpt on this Anakin Skywalker feels quite different from the other Anis in the 6-inch scale line that have come before. How did you adjust your interpretation of the character to more closely match his appearance in the early episodes of The Clone Wars series and the film?

Eric Franer: Our team definitely felt like the portrait was in need of an update, so we decided to take another crack at it for this figure! For this sculpt it was important for us to find the sweet spot between [Star Wars: Attack of the Clones and Star Wars: Revenge of the Sith], so his hair isn’t quite as long as in Revenge of the Sith.

StarWars.com: Can you give us any hints about what else we can expect from the Lucasfilm 50th line? I adore the card backs from Star Wars: The Phantom Menace and these will also be a fine addition to my collection.

Eric Franer: While I can’t hint too much at what is to come, we do have a lot to celebrate for Lucasfilm’s first 50 years. We’ve been able to hit a lot of the key moments in Lucasfilm’s history between these Clone Wars characters and the Phantom Menace card backs. We are really excited for you to see what else we have in store!