Hasbro's Steve Bono and Steve Evans speak to Star Wars.com about the line's new recruits, including DJ from Star Wars: The Last Jedi.

Hasbro unveiled at New York Comic Con today four new figures coming to its vaunted Star Wars Black Series 6-inch line in 2018, including Benicio del Toro's Star Wars: The Last Jedi character, DJ. Made during the film's production, Hasbro has captured everything from DJ's scruffy facial hair to the gold detailing on his jacket. For a character of which we have seen little, it's very impressive. 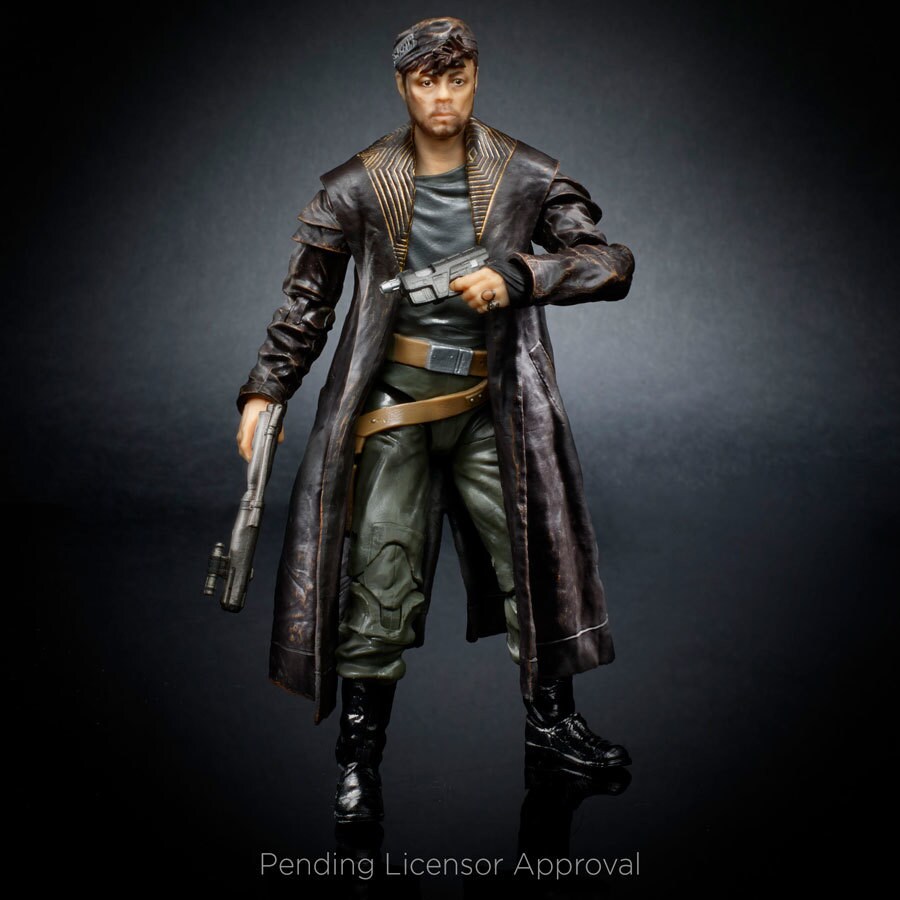 "[Lucasfilm] has a great system with us," Hasbro senior designer Steve Bono tells StarWars.com, "where they provide us with all the assets during the production that they can. When the actors do their costuming, they take pictures of them front, side, back, every view they can. They photograph all the weapons, all the props, all the costumes, and then provide that all to us digitally, which we can then use to create the most accurate figures we can."

The likeness is impossibly accurate -- that is Benicio del Toro's face and no one else's -- and a testament to Hasbro's new design technique for portraits.

"This process is inkjet printing where the color is sprayed onto the face," Bono explains. "Much like you would print a picture from a copier. They're able to capture a lot more subtlety, a lot more color, and it's not just one color at a time." Not to be left out are original trilogy fan favorites Lando Calrissian (Jabba's palace disguise), and bounty hunters 4-LOM and Dengar, also joining the Black Series. They presented the design team with different hurdles, from sculpting challenges to a lack of reference compared with modern digital assets for a character like DJ. Of the droid 4-LOM, Bono says, "You may notice he uses some pieces you've seen in C-3PO, but we have upgraded certain areas. He obviously has a new head and torso, but the arms are of particular interest, because he's a bounty hunter and uses a weapon. C-3PO can't hold weapons with the way his arms work. We've been able to articulate the elbows and wrists differently so that he can really hold his weapons." For Dengar, another bounty hunter who has slowly become a cult favorite, not much legacy photography exists. Is it more of a challenge for the design team when bringing an obscure character like this to figure form?

"It is," Bono says. "It involves a lot of Photoshop work, to be honest. We go back and forth and try to, as best we can, capture the likeness." Hasbro searched for photos of Dengar actor Morris Bush outside of Star Wars to provide more reference. Based on the prototype on display, the work seems to have paid off, and Dengar fans will be very happy. "We were really excited to capture the actor likeness with the printing process we have. He's got such character in his face."

And why these figures now? For Hasbro, it's a combination of factors, but fan requests play a particularly large role in character selection.

"Dengar, in particular, I've seen a lot," says Steve Evans, director of Design and Development for Star Wars at Hasbro. "I showed my son. He's 14, plays Battlefront, and he said, 'Dengar, yes!'"

As the line continues to make advances in sculpting, articulation, and detailing, Hasbro is proud of its work but also wants to keep pushing forward. "When I took over designing the Black Series line when The Force Awakens hit, we took all our figures and laid them out," says Bono. "We put them in buckets like, 'This one, good quality. This one, decent. This one, could be improved.' It came down a lot to portraits of the faces and the eyes. If the eyes don't look right, the figure falls apart. If they eyes look really good, we can build from there. So that was number one, to really improve the portraits. And then number two, we've made an effort to go back and look at every articulation point, the way we do fabric, the way we do printing, and the way we do deco, and improve that to the point it is now and make it as excellent as it can be."