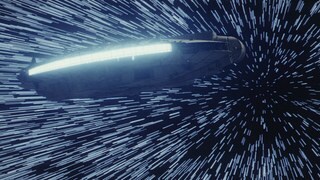 An extensively modified Corellian light freighter, the Millennium Falcon is a legend in smuggler circles and is coveted by many for being the fastest hunk of junk in the galaxy. Despite her humble origins and shabby exterior, the ship that made the Kessel Run in less than 12 parsecs has played a role in some of the greatest victories of the Rebel Alliance and the New Republic. The Falcon looks like a worn-out junker, but beneath her hull she’s full of surprises. A succession of owners, including Lando Calrissian and Han Solo, have made special modifications that boosted the freighter’s speed, shielding and firepower to impressive – and downright illegal – levels. The price of such tinkering? The Falcon can be unpredictable, with her hyperdrive particularly balky. Despite her flaws, she’s beloved by her owners – Han Solo and Chewbacca spent years searching the galaxy for the ship they once called home, rejoicing when they finally reclaimed her. 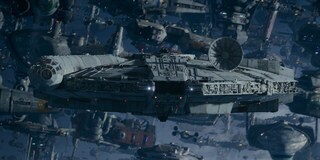 Author Jason Fry traces his love affair with Han Solo’s bucket of bolts over more than 40 years of fandom. 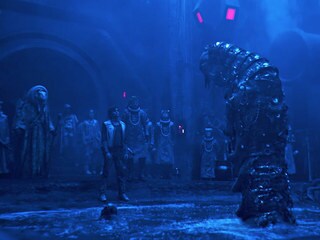 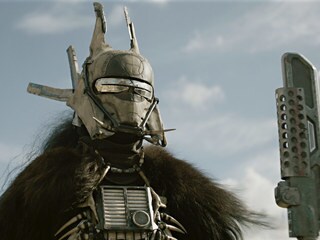 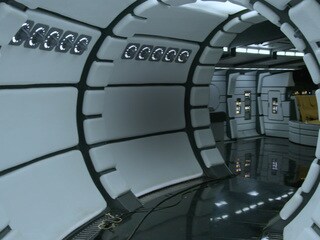 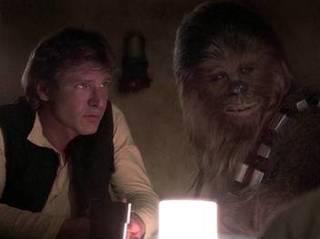 Captain of the Millennium Falcon 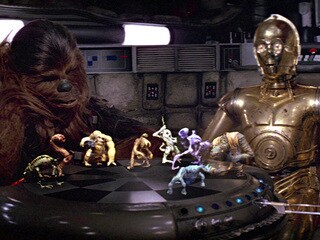 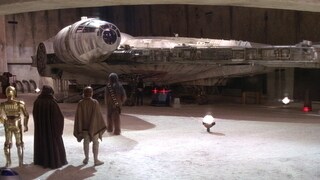 The Millennium Falcon was Lando Calrissian’s pride and joy. After he acquired the Corellian freighter, Lando spared no expense remodeling it according to his discerning tastes. Extensive modifications made the Falcon an ideal home base for a sophisticated “sportsman” like Lando, who traveled the galaxy with pilot droid L3-37.

The promise of a hefty percentage persuaded Lando to hire out his prized ship for a raid on Kessel’s coaxium supply. It was a decision Lando would come to regret.

After the mining colony erupted in a mass breakout, Han Solo took the helm to complete the galaxy’s most famous Kessel Run. The glory of the achievement came at a crippling cost. By the time the Falcon touched down on Savareen, it was in worse shape than when Lando had first found the crude freighter. The journey had stripped away the immaculate streamlined plating, the auxiliary craft had been lost, and Lando soon retreated, limping away in what remained of his crowning achievement.

But Han tracked Lando down on Numidian Prime, where he won the ship in a game of sabacc. For many years, the freighter served as home base as Han and Chewbacca began their smuggling careers.

When Obi-Wan Kenobi hired Han Solo and Chewbacca for a charter to Alderaan, the Jedi specified that he needed a fast ship. Han assured him he’d found one -- hadn’t the Millennium Falcon made the Kessel Run in less than 12 parsecs? When Luke Skywalker first saw the battered freighter, he was convinced they’d been hoodwinked -- the Falcon looked like she might fall apart in her docking bay. But the Falcon lived up to her captain’s boasts, escaping the Imperial warships guarding Tatooine and proving maneuverable and tough in a firefight with TIE fighters patrolling space around the Death Star. Han and Chewie were at the Falcon’s controls when they blasted Darth Vader and his TIE wingmen off Luke’s tail, giving the young Rebel the chance to make the million-to-one shot that destroyed the Death Star.

Han decided to leave his friends with the Rebel Alliance and pay off his debt to Jabba the Hutt, but the Falcon wouldn’t cooperate -- he and Chewbacca spent hours in Echo Base’s hangar trying to get the balky freighter back in flying shape. Han barely got the Falcon off the ground, escaping Hoth just ahead of Darth Vader’s shock troops, but her hyperdrive failed with Star Destroyers and TIE fighters in hot pursuit. Unable to go into lightspeed, Han sought refuge in an asteroid field, where he made frantic repairs -- but the hyperdrive failed again. Han used every trick known to Corellians to escape and limp to the nearby star system of Bespin, where Lando’s techs fixed the Falcon. Lando didn’t know the Imperials -- who encased Han in carbonite in Cloud City -- had deactivated her hyperdrive as a safeguard against escape attempts, but fortunately R2-D2 discovered the sabotage. The little droid reactivated the hyperdrive, allowing the freighter and her crew to escape.

Lando and Chewbacca discovered Boba Fett had taken Han to Tatooine, and hid the Falcon while they infiltrated Jabba the Hutt’s palace to rescue their friend. Han then lent his beloved ship to Lando for the Rebel attack on the second Death Star at Endor. The Falcon maneuvered like a fighter in the chaotic battle, diving into the battle station’s labyrinthine superstructure. Lando fired concussion missiles into the Death Star’s main reactor and raced for the surface, escaping just as the station exploded. The lowly freighter, once derided as a piece of junk, had destroyed the Empire’s greatest weapon. 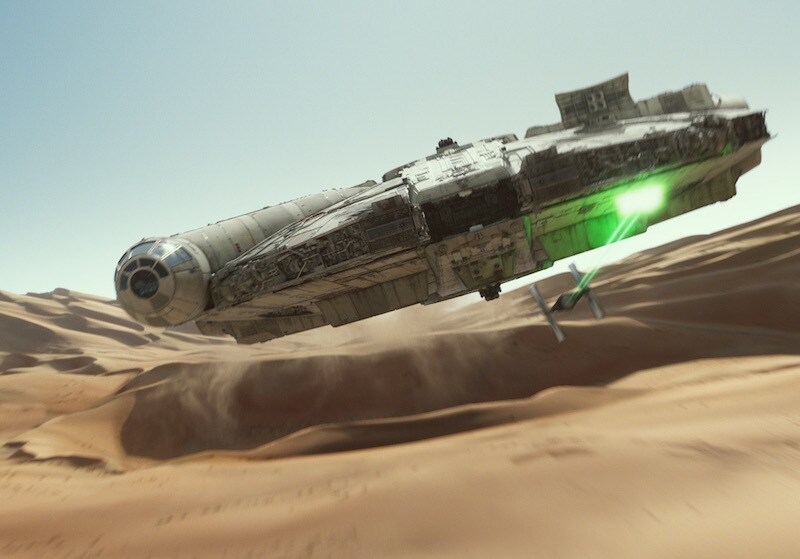 After her star turn at the Battle of Endor, the Millennium Falcon was part of several key New Republic victories over the Empire’s remnants – and further semi-legal adventures pursued by Han and Chewie. But the duo lost their beloved freighter to Gannis Ducain, and spent years trying to find her again. Meanwhile, the Falcon kept changing hands, going from Ducain to the Irving Boys before winding up under a tarp on Jakku.

Han and Chewie reclaimed the Falcon, but Han died shortly after getting to see his beloved ship again. Chewie and the scavenger Rey – who’d stolen the Falcon from Unkar Plutt on Jakku – then piloted the freighter into the Unknown Regions on a quest to find Luke Skywalker. After Rey left Ahch-To, the Falcon – now home to nests of porgs – served as an escape craft for the besieged Resistance on Crait.

The Falcon encountered some serious scrapes as the fight between the First Order and the Resistance intensified: damage from lightspeed skipping, capture on Pasaana and near-incineration, and a rough landing on Kef Bir. But the battered freighter survived them all, and flew at the head of a citizens’ navy that bolstered the Resistance’s numbers at the climactic Battle of Exegol. 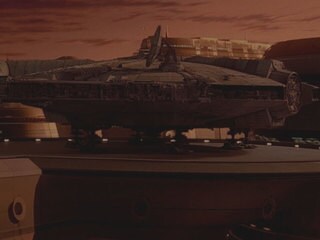 "You know, that ship's saved my life quite a few times. She's the fastest hunk of junk in the galaxy!" “She may not look like much but she’s got it where it counts, kid.” 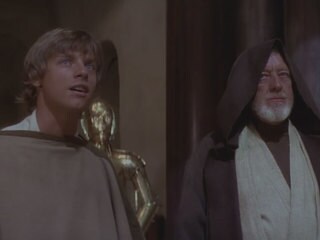 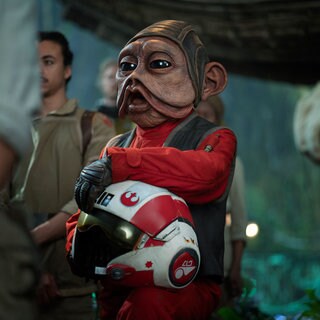 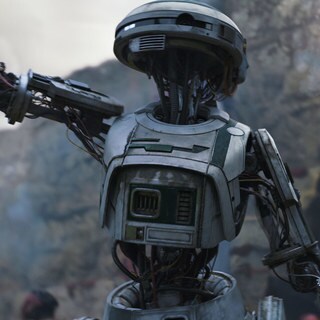