Hailing from the Smuggler’s Moon of Nar Shaddaa in the Outer Rim, Sana Starros never questioned where life was going to take her. She knew she wanted to see the stars -- and make a lot of credits along the way. She never believed in anything but herself. But when fate (or the Force) brought Leia Organa into her life, Sana felt something new: hope.

Sana is the former partner of Han Solo and Doctor Aphra, a valuable asset to the Rebellion, and a smuggler and swindler. Let’s meet the cutthroat captain with a rebellious streak to celebrate her return to the pages of Star Wars: Doctor Aphra this year. 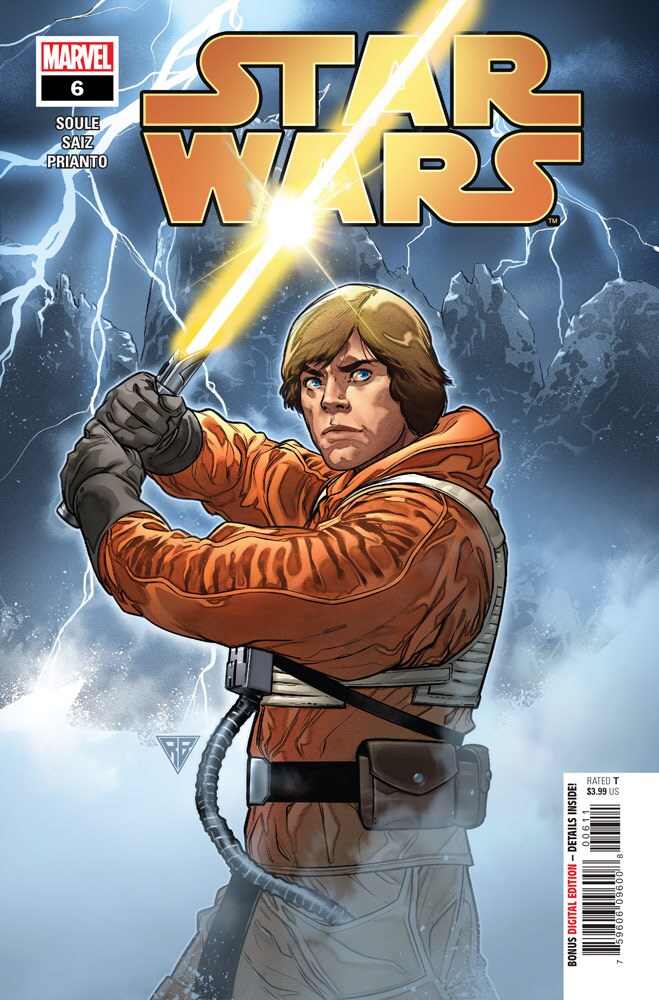 Captain Sana Starros, created by writer Jason Aaron and artist John Cassaday, made her first official appearance in Marvel’s Star Wars #6 (2015). She energized Star Wars fans everywhere when she was introduced as Han Solo’s supposed wife, and she’s played an important role alongside our favorite rebels ever since.

Shortly after the Battle of Yavin, Leia Organa and Han Solo found themselves on a remote, unnamed planet as they hid from Imperials in orbit above. There they came face to face with a smuggler who had tracked down the scoundrel for what he owed her after a job gone wrong years earlier. The no-nonsense pilot introduced herself to the shocked Leia as Han’s wife, Sana Solo. 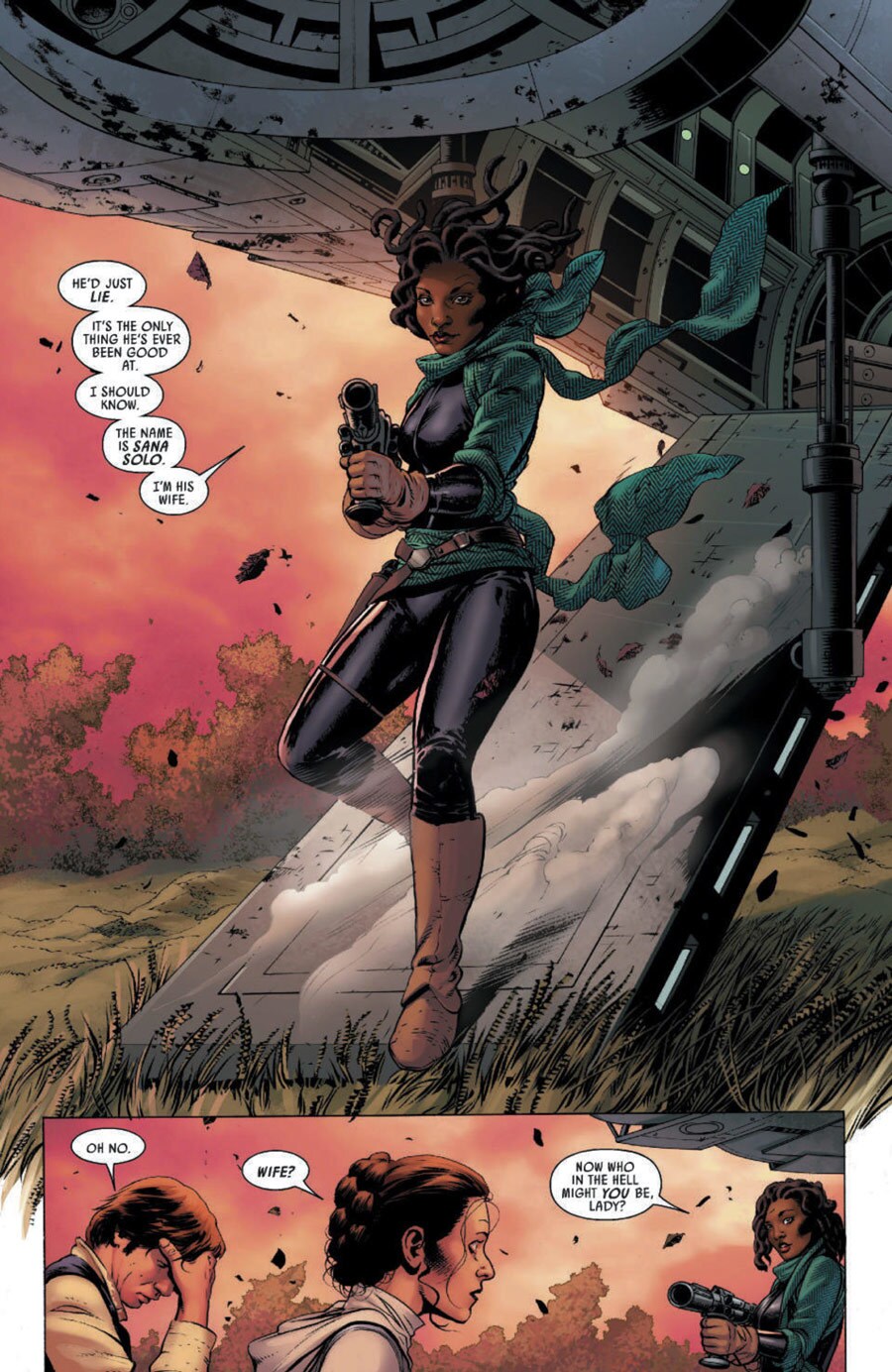 Sana quickly recognized the princess and the considerable bounty on her head. She proposed taking in the rebel and cashing in on the prize -- and was shocked when Han refused the big payday. Han insisted that his marriage with Sana had been faked years earlier as the cover story for a robbery, but Leia didn’t want to listen. Eventually Sana, won over by Leia’s tenacity, confirmed Han’s story.

“Things are definitely never boring when you’re around, Princess,” Sana admitted with a smile.

Sana Starros worked as a smuggler behind the controls of her ship, the Volt Cobra, and she held no allegiance to either the Empire or the Rebellion. She simply wanted to get what she was owed. Leia hired her to help rescue Luke Skywalker from Nar Shaddaa, and later to escort a captured criminal and associate of Darth Vader. The prisoner’s name? Doctor Chelli Aphra.

Doctor Aphra was a rogue archaeologist with questionable morals. She was willing to partner with anyone who could help her get what she wanted, including the Empire. When the rebel jail was infiltrated by zealots intent on killing all the prisoners, Leia, Sana, and Aphra reluctantly teamed up to stop them.

Sana and Aphra had a history together, Leia quickly learned, and it was complicated. (When it comes to Doctor Aphra, everything is complicated.) Sana’s anger bubbled over. Aphra apologized for how she left things, and Sana begrudgingly let her live. In return for Aphra’s invaluable help with stopping the prison takeover, Leia and Sana looked the other way while the archaeologist escaped.

Captain Starros would continue to join the Rebellion’s luckiest heroes on their risky adventures, including stealing a Star Destroyer from right under the Empire’s nose. She often repeated that she was only sticking around to get the credits Han Solo owed her, but Luke Skywalker suspected that there was more to it than that.

“You’re a smuggler,” he told her. “If it was only about the money, something tells me there are easier ways to make a payday.”

Sana helped rescue Luke Skywalker and Han Solo from the clutches of the queen in the Screaming Citadel, where she also patched things up with Doctor Aphra -- after shooting at her. 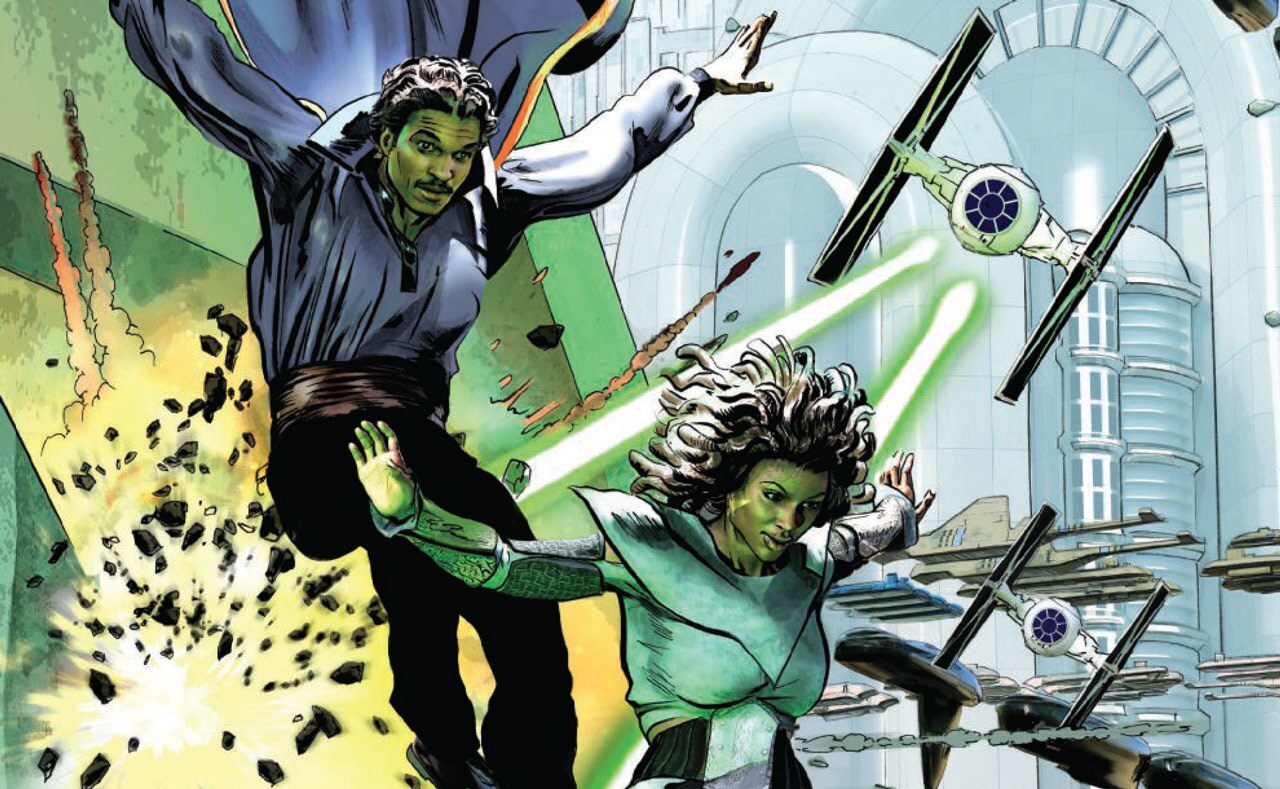 Lando Calrissian watched in awe as he came along for the ride during her next big scam on Coruscant and Tatooine. All those credits didn’t go into her own pockets, but instead to a hospital on her home planet.

Sana Starros had a heart of gold, even if she insisted otherwise.

Nothing tested her compassion more than Doctor Aphra. General Hera Syndulla approached Sana with a job to kidnap and retrieve intel from the once-again imprisoned doctor. Sana’s explosive arrival at the station where Aphra was being held put her at odds with Imperial Captain Magna Tolvan, who was also there to rescue the archaeologist. They were both captured alongside her.

As the Empire abandoned the jail, now infected by sentient spores, the station was set on a collision course with a nearby planet. Sana made it to the planet safely in an escape pod and called in rebel forces for evacuation and assistance. Aphra was taken by Doctor Evazan, and Magna Tolvan joined the Rebellion. Sana’s troubles with the Empire didn’t end there. Han Solo hired her to smuggle himself, Luke Skywalker, Princess Leia, and their droids during their search for the remaining rebel fleet. A Star Destroyer found the Volt Cobra, and the rebels were forced to escape to the moon below while Sana tried to evade them. She promised to pick them up as soon as she cleared their scans.

Days passed. Finally, captured by an elite squadron and tortured by interrogation droids, Sana confessed the rebels’ location. The Empire used her as a hostage to force Han, Leia, and Luke to come out of hiding. With the help of new allies, Sana and the heroes of the Rebellion escaped. They found their way back to the rebel fleet and the Millennium Falcon. Sometime later, Doctor Aphra was still the same old Aphra. The archaeologist had caught the attention of Lady Domina, the powerful head of the Tagge Corporation, who hired her to track down a Nihil artifact. Aphra wanted a professional she could trust (sort of) at her side for such a high-stakes job. She thought of only one person: Captain Sana Starros.

What trouble will Sana get into with Aphra once again? Nothing good, that’s for sure. Find out in Star Wars: Doctor Aphra #7!