In December 1977, after Star Wars had spent six months taking audiences to a brand-new galaxy far, far away, Lucasfilm began sending holiday cards to friends and corporate partners — a tradition that continues today. The very first Lucasfilm holiday card, which was an unassuming, Hollywood-themed greeting card, was probably sent to a few hundred recipients in 1977 and subsequently relegated to the backs of drawers — or worse — after the holiday season. The unfortunate fate of that first card would never be repeated, however, since the following year’s Lucasfilm card would debut two of the company’s most recognizable assets: droids C-3PO and R2-D2. And so began a long line of Star Wars-themed holiday cards issued by Lucasfilm over the years, a selection of which we are featuring here. Fans of legendary Star Wars artist Ralph McQuarrie will be delighted to see several of his works, which were exclusive to these cards, with most created between 1978 and 1983. 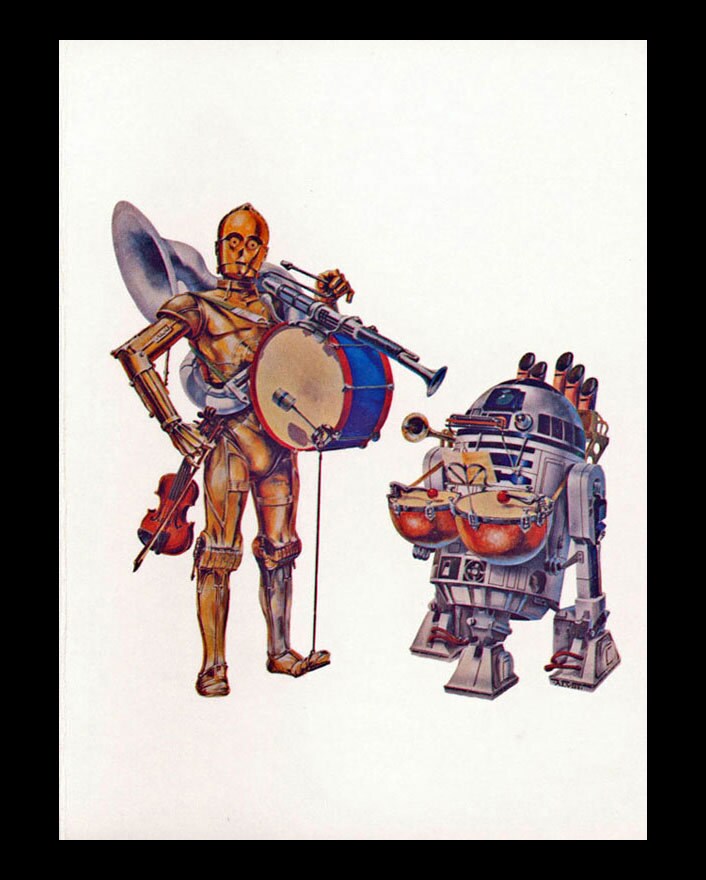 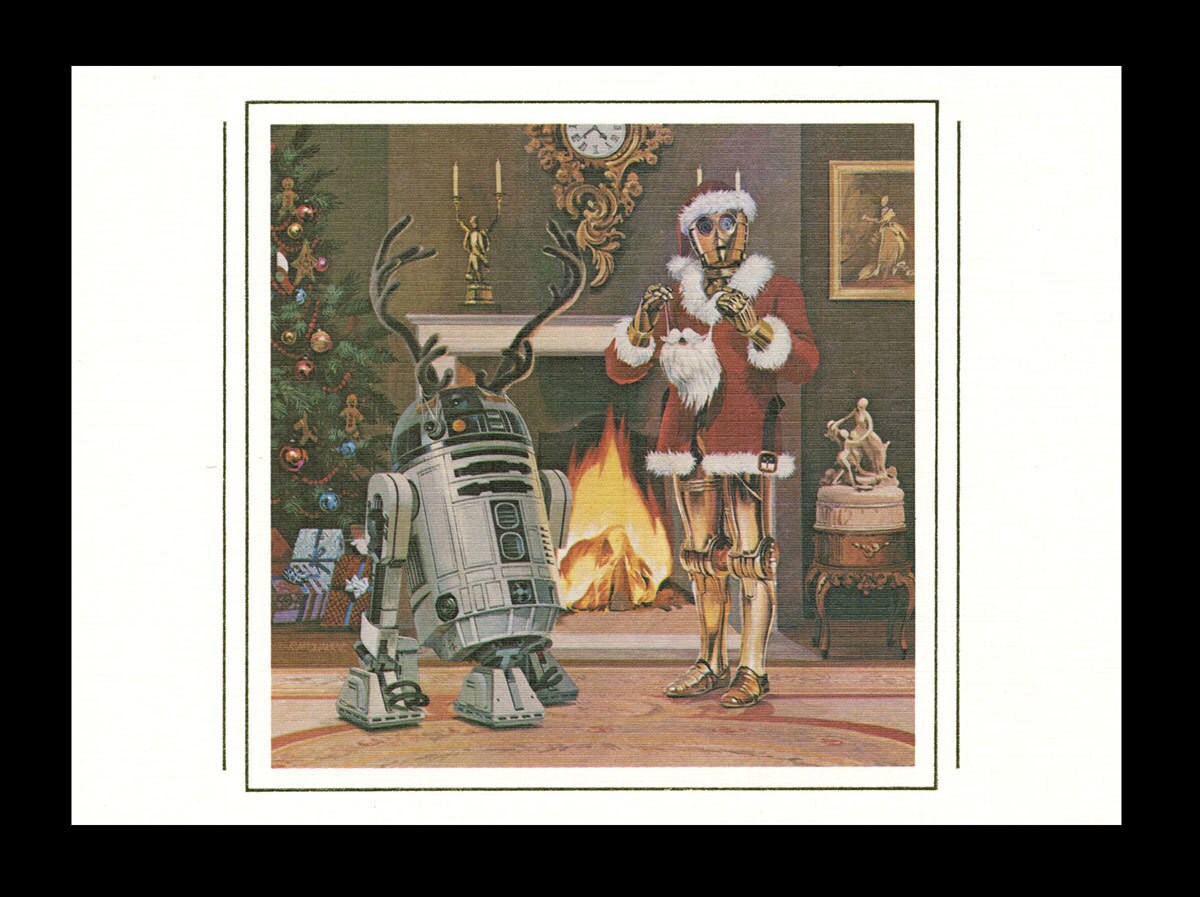 1979 Lucasfilm: R2-D2 and C-3PO shed the musical instruments of 1978 to don more holiday-appropriate garb for the 1979 Lucasfilm holiday card, illustrated by Ralph McQuarrie. 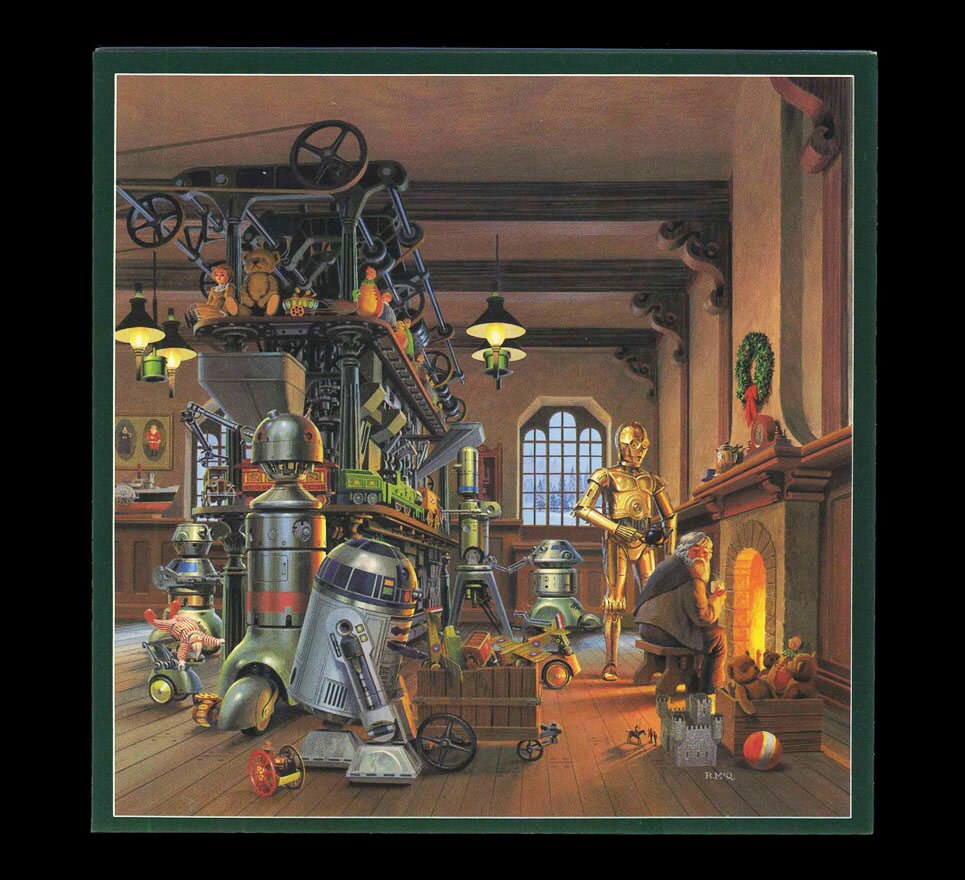 1980 Lucasfilm: McQuarrie's artwork for Lucasfilm's 1980 holiday card was also the cover illustration for the only Star Wars Christmas album to date: Christmas in the Stars. 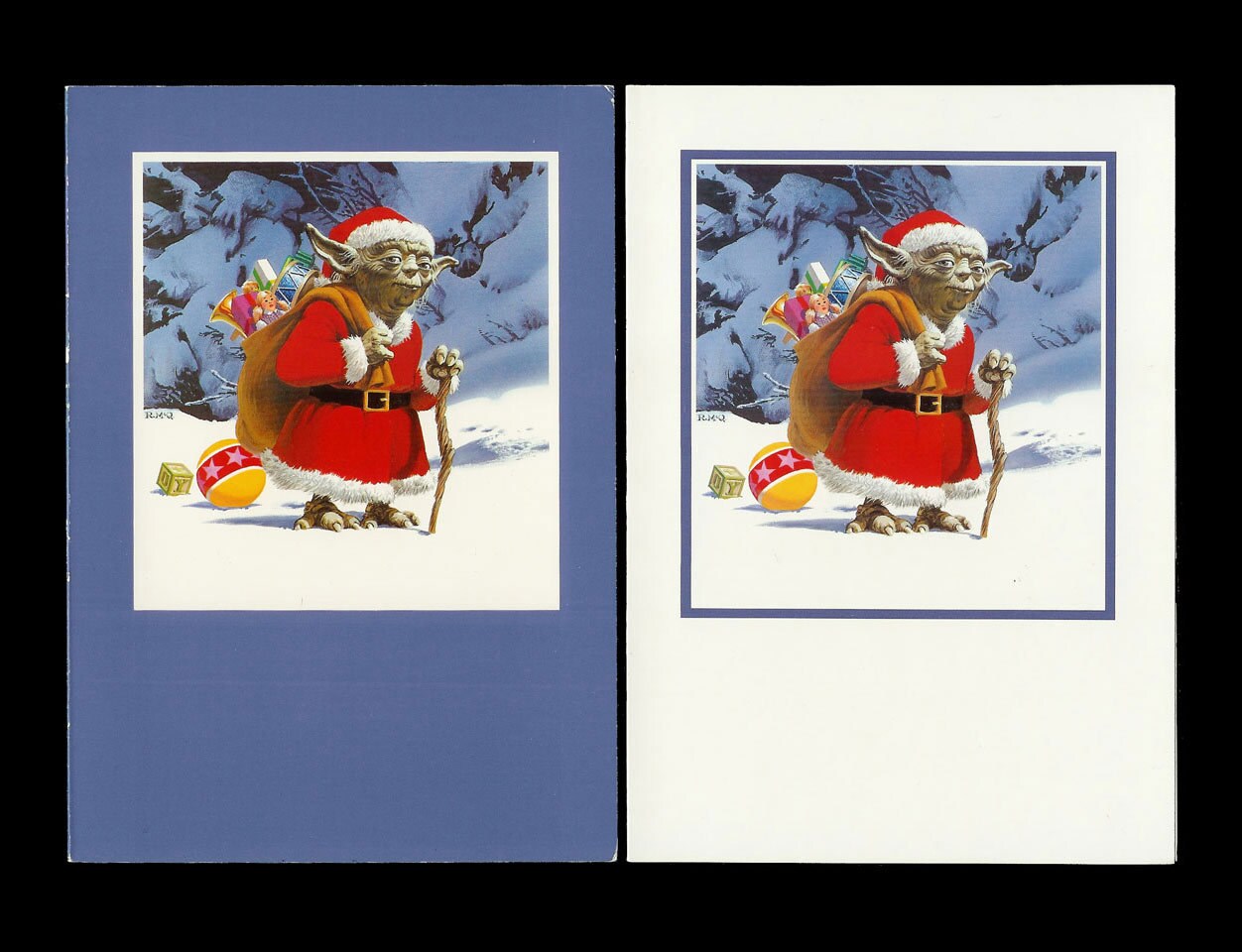 1981 Lucasfilm: McQuarrie's Santa Yoda actually appeared on two different holiday cards from Lucasfilm in 1981, one blue and one white, giving collectors an extra variant to hunt down (the illustration was resurrected again for the company’s 2012 card, making three variations to find!). 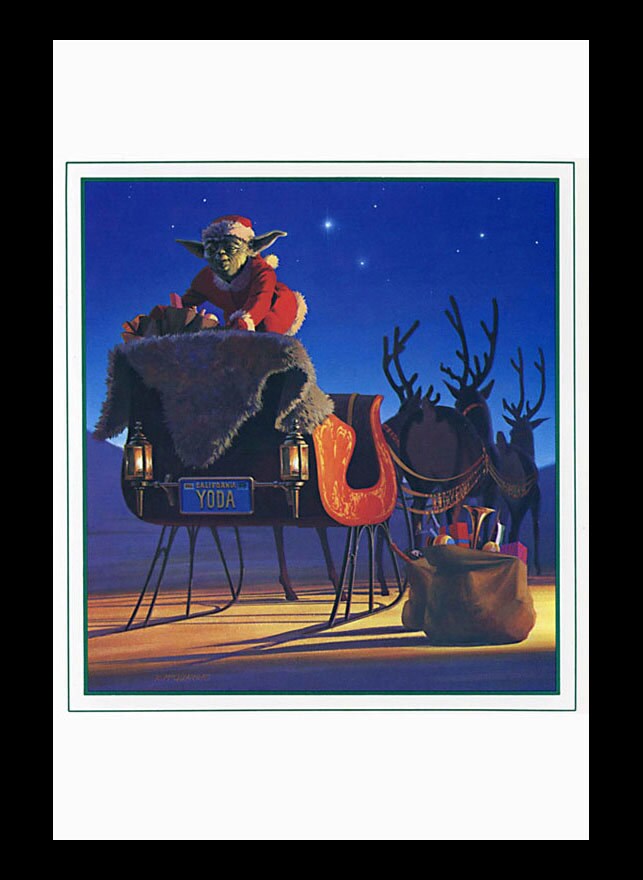 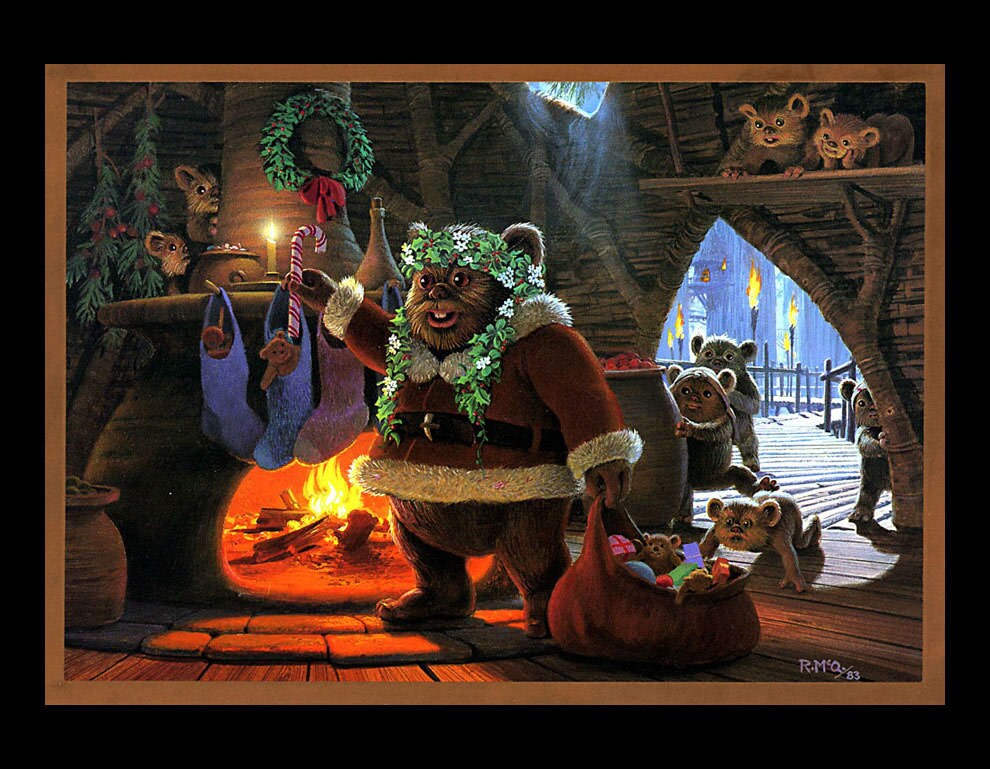 1983 Lucasfilm: Ewoks were the obvious choice to front the 1983 holiday card, as many toy versions of them would be given as gifts to young fans that year. Art by Ralph McQuarrie. 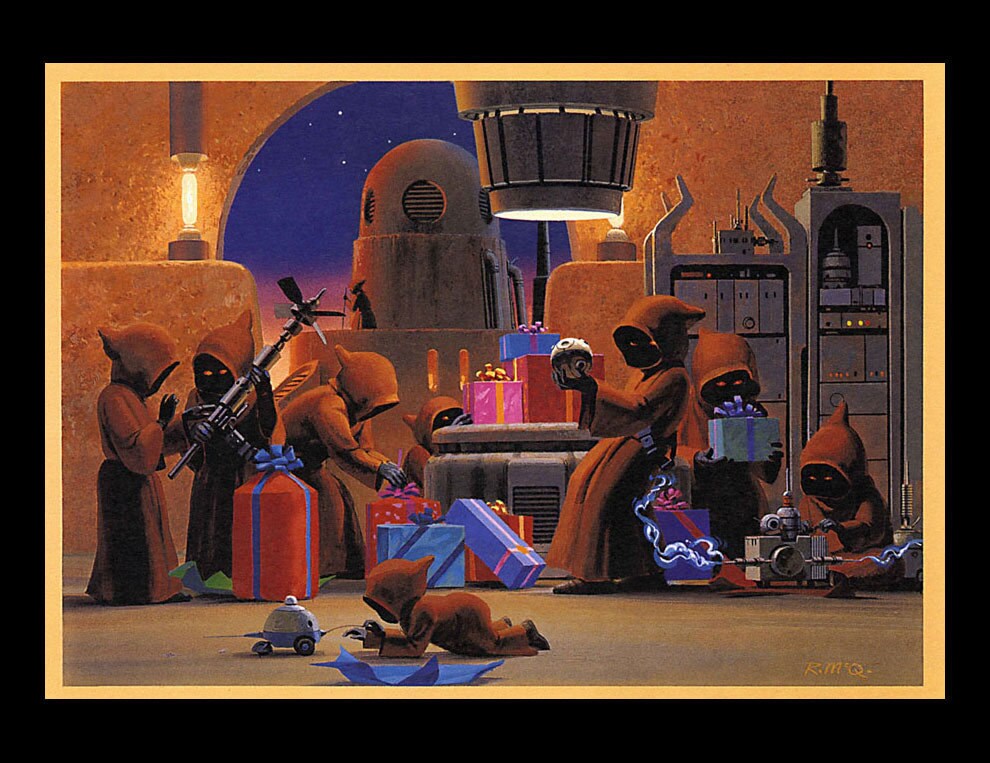 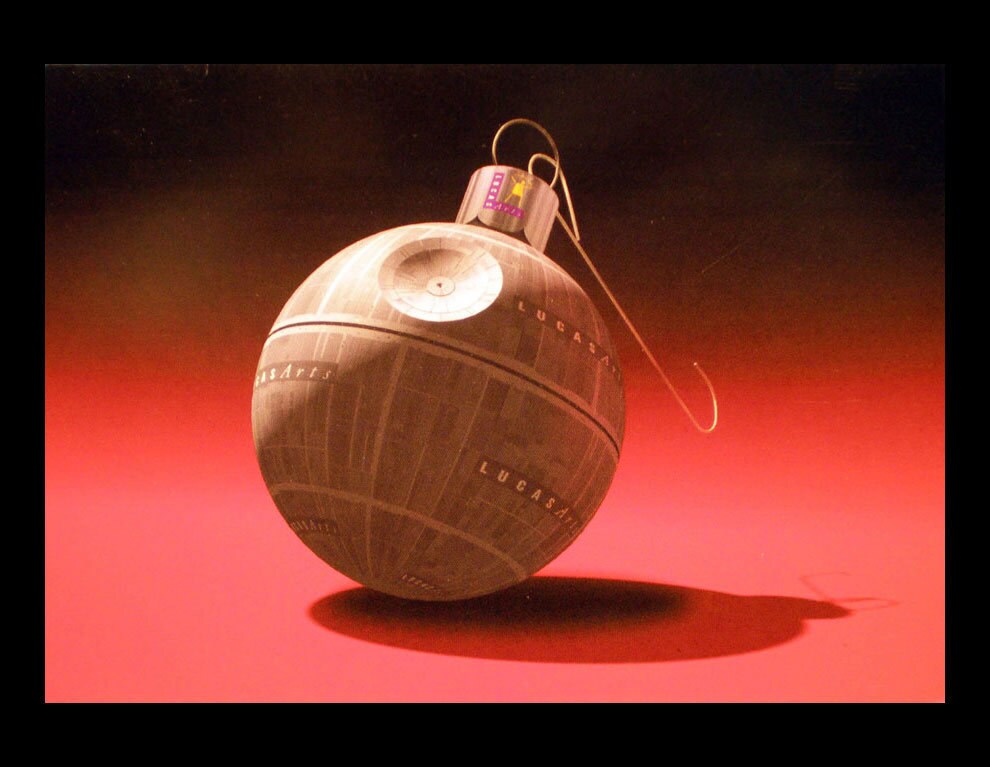 1995 LucasArts: The Death Star gets ornamental in this card from LucasArts in 1995 by Peter Chan and Daniel Colon, Jr.

2000 Lucasfilm: Kids on sleds are in for the ride of their lives in this whimsical card from 2000 created by Kathryn Otoshi, Philip Metschan, and Angela Ursillo.

2011 Lucasfilm: Jabba the Snowman was the subject of 2011’s holiday card by Devon Cutler, which visually delivers on its warm-wishing sentiment. 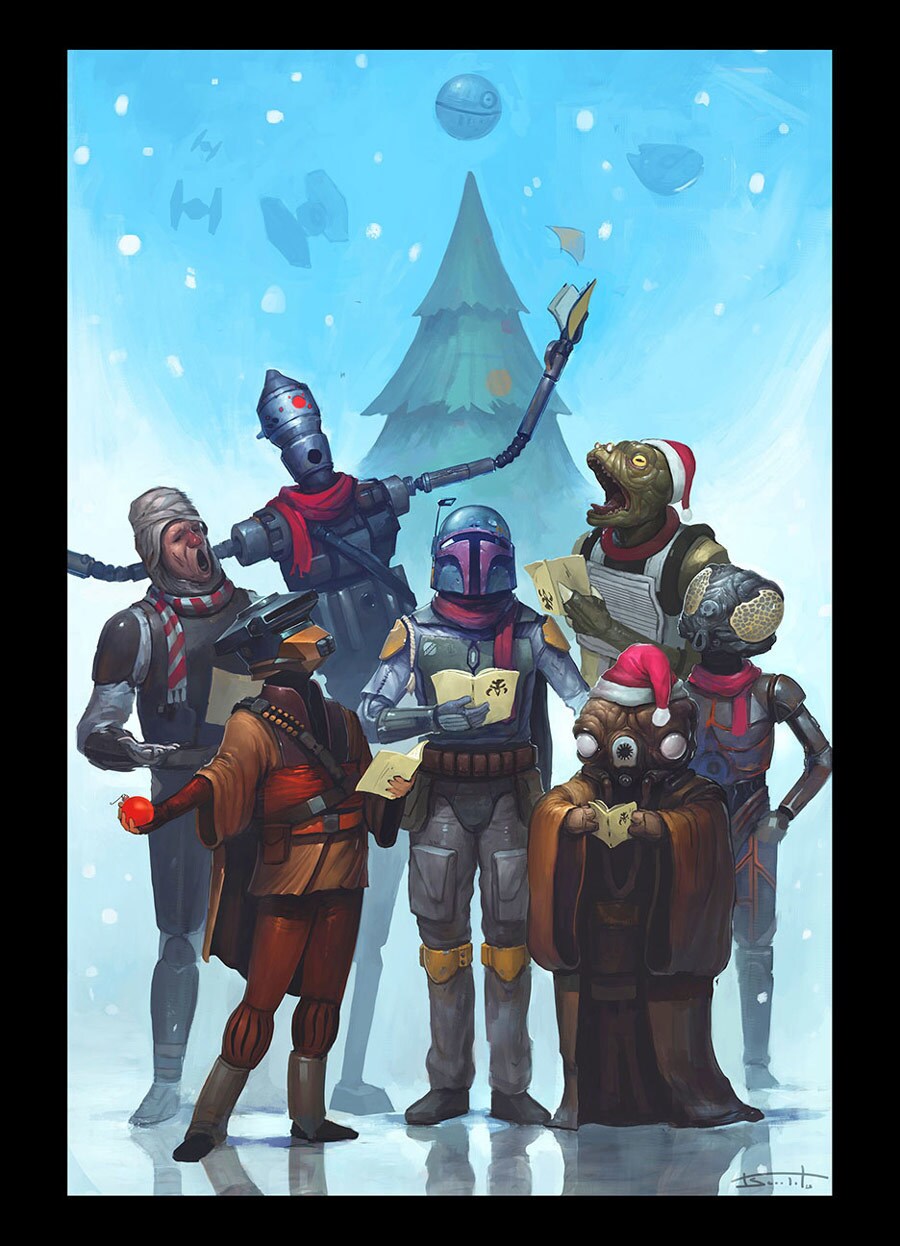 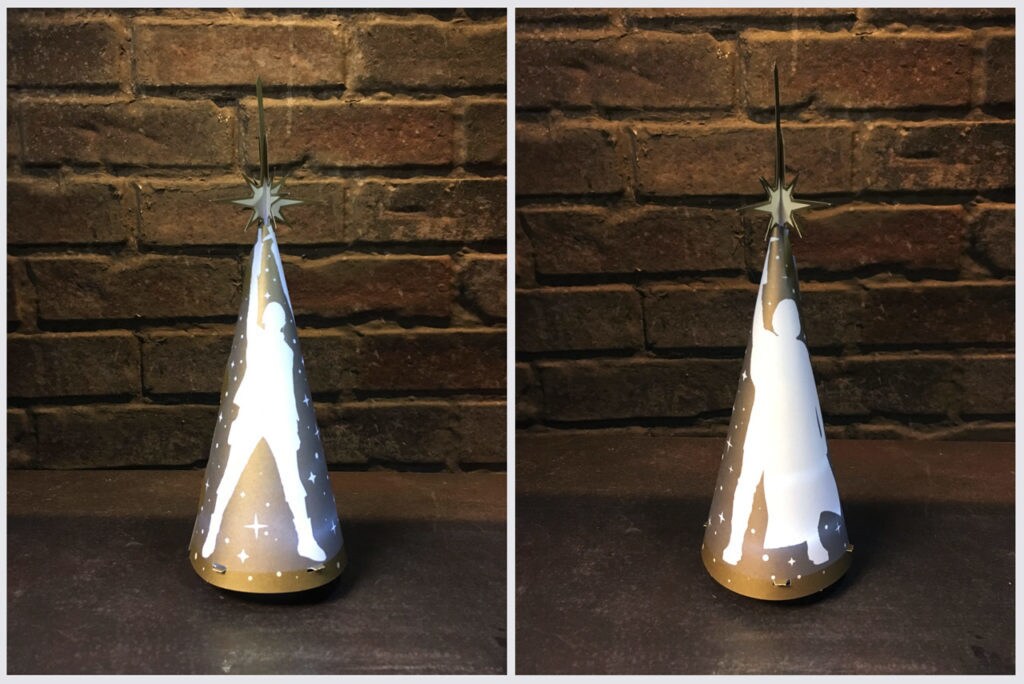 2017 Lucasfilm: Lucasfilm’s Hez Chorba designed the holiday card for 2017, which depicts Rey and Kylo Ren on opposite sides of a “tree” illuminated from within by a tea light.

2018 Lucasfilm: For 2018, Hez Chorba created a fold-out holiday card containing three punch-out ornaments, each with characters from one of the three Star Wars trilogies (format re-arranged here for presentation).

2019 Lucasfilm: 2019 provided the last of the physical Lucasfilm holiday cards (for now), and designer Hez Chorba created a wonderful pop-up Yoda Fountain card to finish out the year. The card is photographed here in Lucasfilm’s San Francisco lobby.

2020 Lucasfilm: Artist Christian Alzmann created a whimsical digital card of Din Djarin and Grogu dashing through the snow on a rocket sled for Lucasfilm’s 2020 holiday card.

2022 ILM: For ILM’s 2022 digital holiday card, artist Jeremy Schmidt delivered this winning design of BB-8 and his snowy counterpart in an ILM employee competition to create the company’s holiday card.

2022 Lucasfilm: This year’s digital Lucasfilm holiday card, which depicts a Jello-toting Darth Vader being warmly welcomed by Obi-Wan, Ahsoka, Yoda, Artoo, and others, was created by ILM’s Aaron McBride.

Happy holidays to everyone from your friends at Lucasfilm!