Cold, quick, and calculating, Crosshair is the kind of no-nonsense warrior who detests working with "regs," or normal clones, and isn't afraid to mouth off about it. A member of the special unit Clone Force 99, also called the Bad Batch, Crosshair once served as the team sniper whose sharp vision gives him superior accuracy and, as a result, an air of superiority. His ability to neutralize a target at tremendous distance using his customized 773 Firepuncher rifle makes him an invaluable soldier. 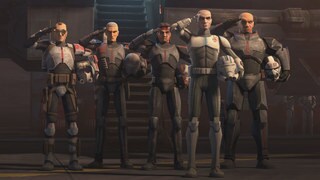 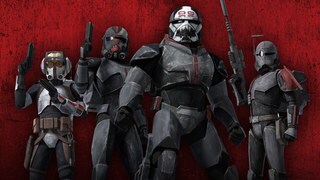 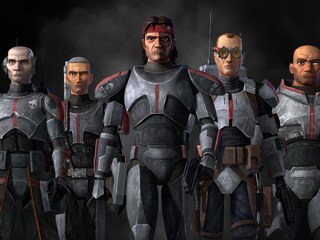 Are you as rowdy as Wrecker or as savvy as Tech? Take the official StarWars.com quiz to find out!

During the Clone Wars, Crosshair was a member of the Bad Batch, an elite group of clones called in for special missions for the Republic. On one occasion, he and his fellow troopers were sent to infiltrate a Separatist Cyber Center and learn valuable intel about the battle on Anaxes.

On Skako Minor, Clone Force 99 helped Anakin Skywalker and Clone Captain Rex get behind enemy lines to rescue the clone called Echo, who was previously thought lost in the escape from the Citadel. But despite the successful mission, Crosshair was vocal about his dislike of regular clones, which he called "regs."

At the end of the war, Crosshair was the only member of Clone Force 99 to attempt to execute Order 66, but Hunter prevented him. On Kaller, Crosshair was prepared to kill a young Padawan named Caleb Dume for treason.

After an Imperial mission to eliminate an insurgency of Separatist droids on Onderon -- only to find organic beings just trying to survive -- the other members of the Bad Batch defected from the new Empire alongside a child called Omega. However, Crosshair remained behind to serve the Emperor and Admiral Tarkin, his inhibitor chip augmented to make him more compliant to following the orders of the new regime.

Crosshair soon became the leader of a new unit of conscripted soldiers as part of the Empire's pilot program to reduce the need for clones. Known as the Elite Squad, the small sampling of highly skilled, enlisted recruits traded their names for numbers and were tasked with neutralizing anti-Imperial insurgents throughout the galaxy. During a mission to Onderon, Crosshair killed one of the soldiers after the trooper questioned his orders to eliminate the civilians they found there.

Later, Crosshair caught up with his old squad on Bracca after scrappers there reported a power surge aboard a Jedi cruiser. The former Bad Batcher trapped his old friends and targeted Omega during a standoff inside the wreckage. Stalking his prey, Crosshair ordered the activation of the engines, nearly incinerating Clone Force 99 in the process. But the Batch escaped with a well-placed explosive while Crosshair and his soldiers were blown back by the energy wave.