The mechanical thrum of the cast iron production line in the Le Creuset factory reminded Sara Whitaker of Darth Vader’s rhythmic breathing. But it’s ironic that in creating the new Star Wars x Le Creuset line, the lid of the limited edition Dutch oven embossed with the image of the Sith Lord’s mask was molded using, of all things, sand. (As we all know from Star Wars: Attack of the Clones, Anakin Skywalker hated the stuff.)

The piece is part of a unique new collection from Le Creuset, and also available at Williams Sonoma, which includes a flock of stoneware pie birds shaped like wide-eyed porgs, a roaster that would be at home hanging on the wall of Jabba’s palace, and an incredibly rare hand-painted Dutch oven that depicts the twin suns setting on Tatooine.

Whitaker, senior category manager for the premium French cookware manufacturer, recently sat down with StarWars.com to talk about capturing the luster of porg eyes, creating a new enamel color for carbonite, and crafting cast iron with a method that Anakin Skywalker would surely find coarse and irritating. 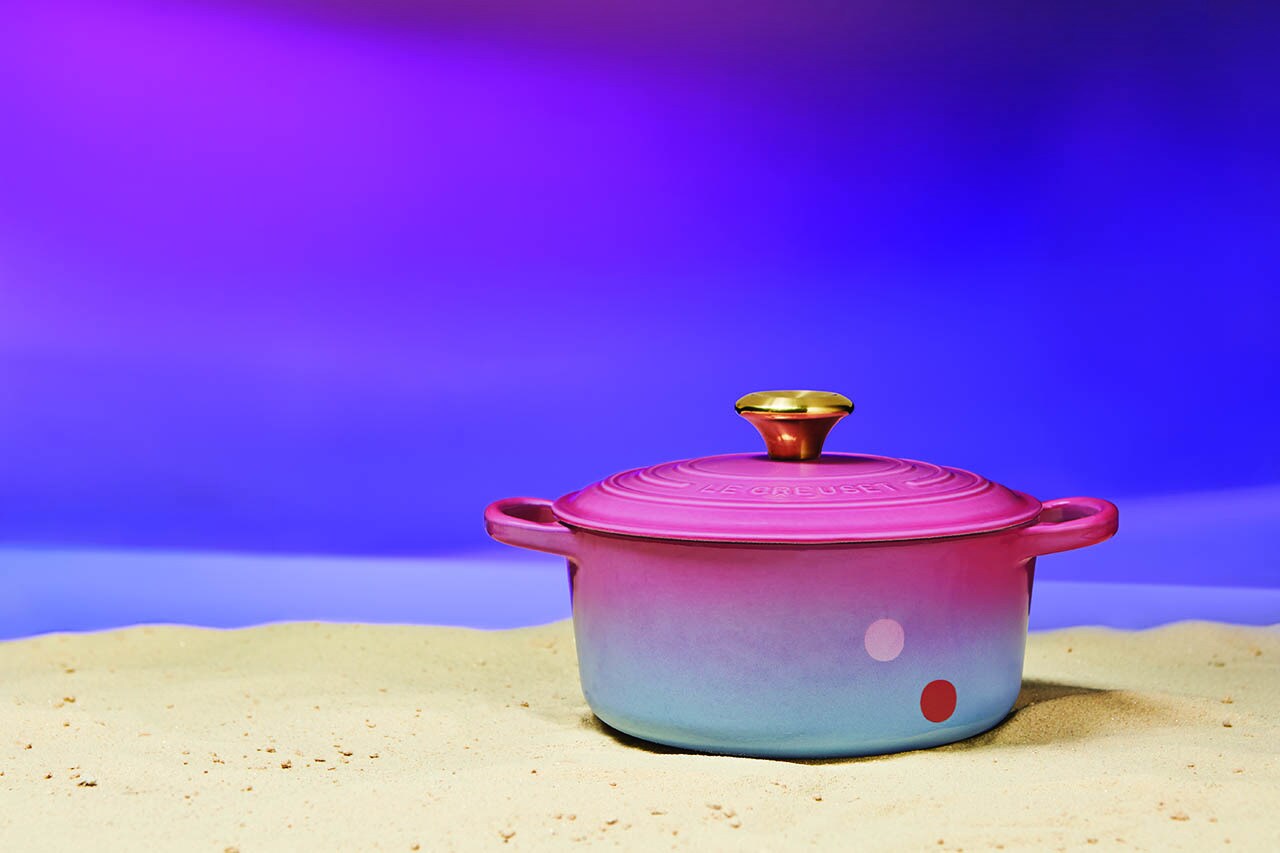 The rare beauty of a handpainted twin sunset

The line’s centerpiece is easily the Tatooine round Dutch oven, the first hand-painted enamel cast iron product from the brand, which has been in business since 1925. The lid is designed to self-baste food, no background in moisture farming required, and it’s topped with a gold knob that offsets the colorful enamel paint that dominates the eye-catching creation.

“What I like about this product is particularly the way they were able to replicate the suns,” Whitaker says, noting that working with enamel isn’t as simple as standard painting. “It’s such a nuanced and scientific process,” she says. Even the background hues, a gradient of blue that melts into the pink sky, was achieved with a spray enamel applied by hand, she says. “They were really able to capture a depth and a luminance to the suns that is really special. I find myself just kind of staring at it because you can see the depth without it being really raised on the surface. There’s a fluidity to it.”

In celebration of the end of the Skywalker saga, the run will be limited to nine pieces worldwide, each one hand-numbered on the inside of the sand-colored lid, Whitaker says, and available for purchase through a lottery system. 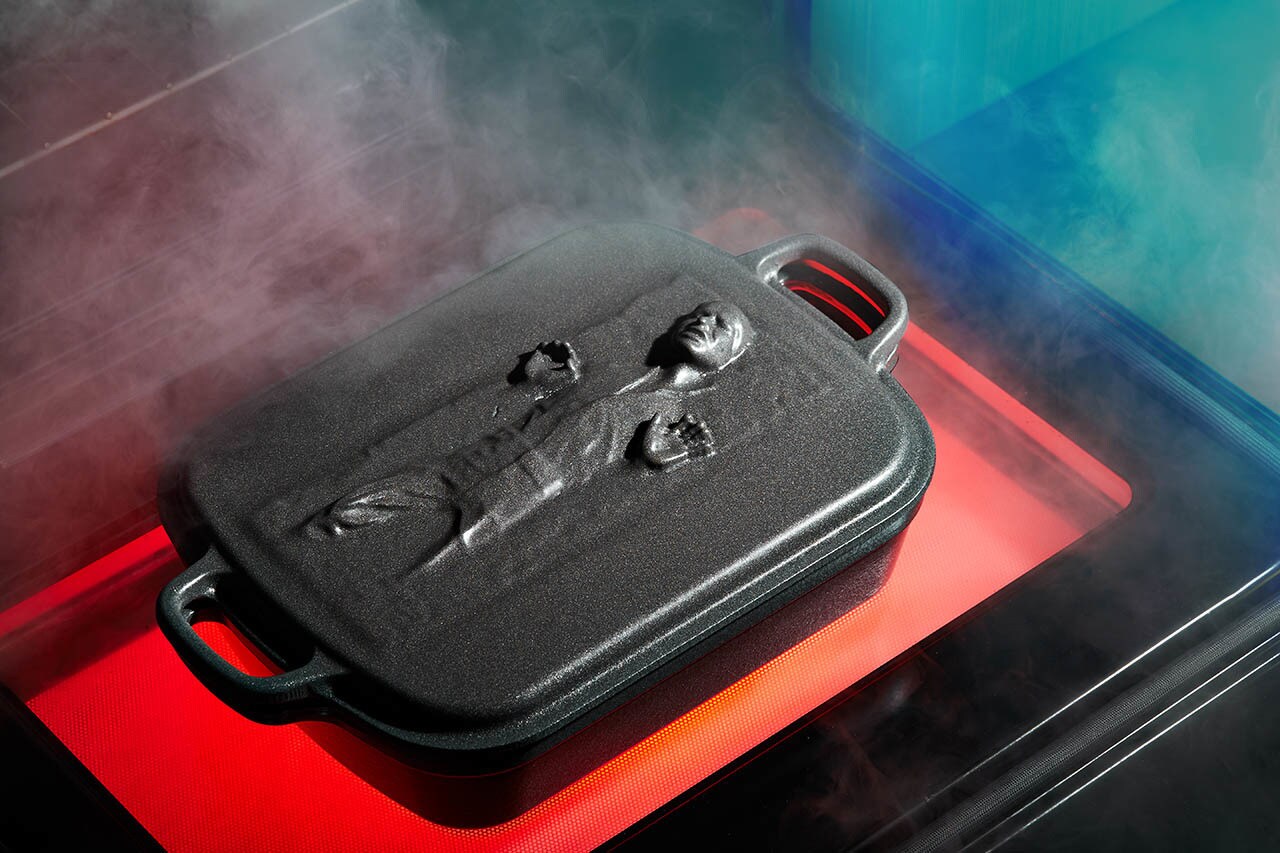 Casting Han Solo in carbonite for the lid of a roaster pan presented its own challenges, including capturing the creases and buttons on his clothes in a way that matched the film version. Whitaker says the team’s cast iron design engineer is also a big fan of the saga, so the craftsmen went back to reference photos of the prop to both recreate those details and find the perfect color for the piece.

To mimic the look of carbonite, the enamel hue called “stone” was created exclusively for the roaster, a dark grey with flecks of gold and silver that give the finished piece a certain texture that’s just right for sealing a delicious roast in a carbon freezing chamber. 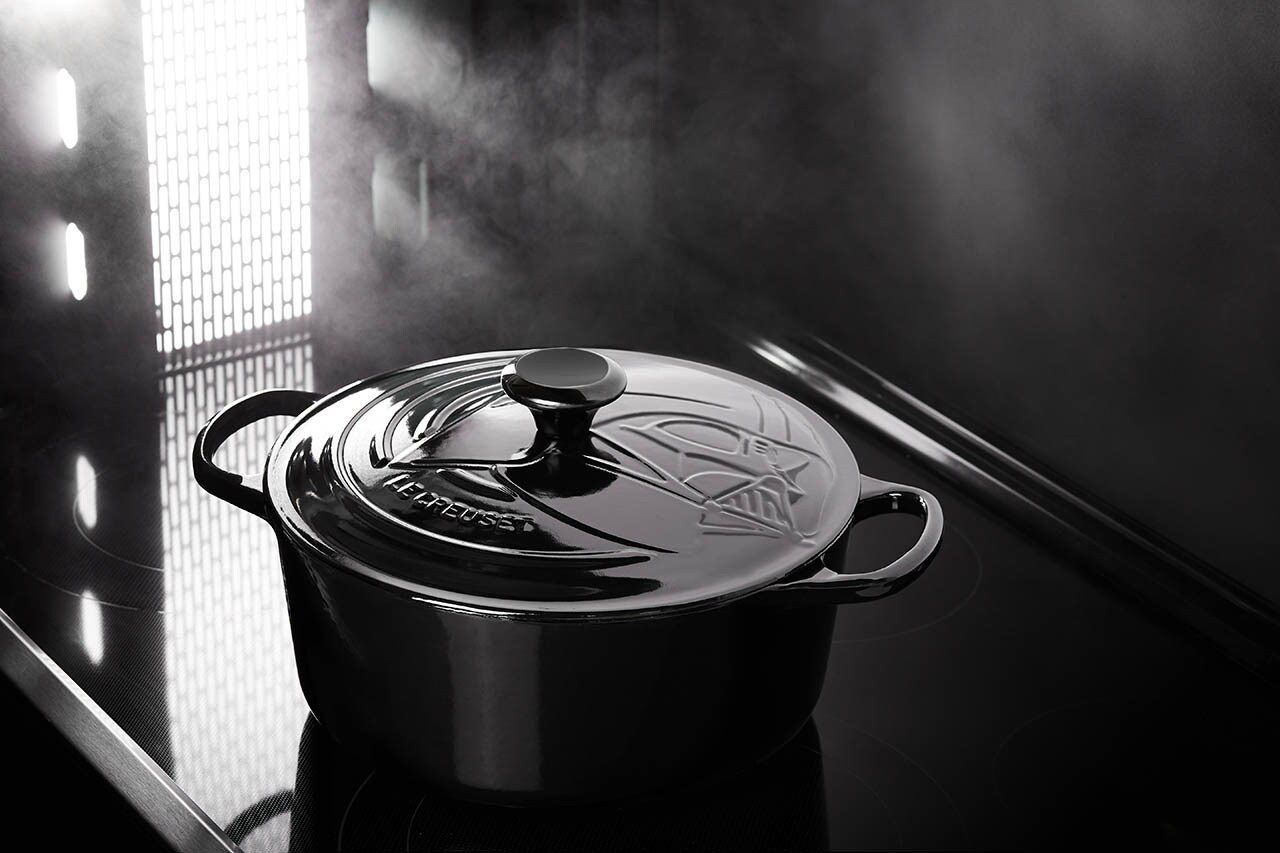 Dark Lord of the Dutch oven

To add a Star Wars spin to the brand’s signature Dutch ovens, they designed a special embossed lid for this piece. “I was really inspired by the sound of Darth Vader breathing,” Whitaker says, recounting the soundscape of the cast-iron manufacturing plant. “If you were standing in our factory listening to the sounds of producing our cast-iron, a lot of it was so strikingly similar [to Vader], the sound of the machine creating the sand mold and the iron being poured.” After each lid is cast, the sand mold used to create the embossed details is essentially destroyed, with the remaining grains are brushed aside as the piece cools and travels down a vibrating conveyor belt.

Flip over the lid and you’ll find the Imperial cog embossed on the underside as well as other charming details, including France spelled out in Aurebesh, as the shiny black exterior gives way to a matte finish interior. 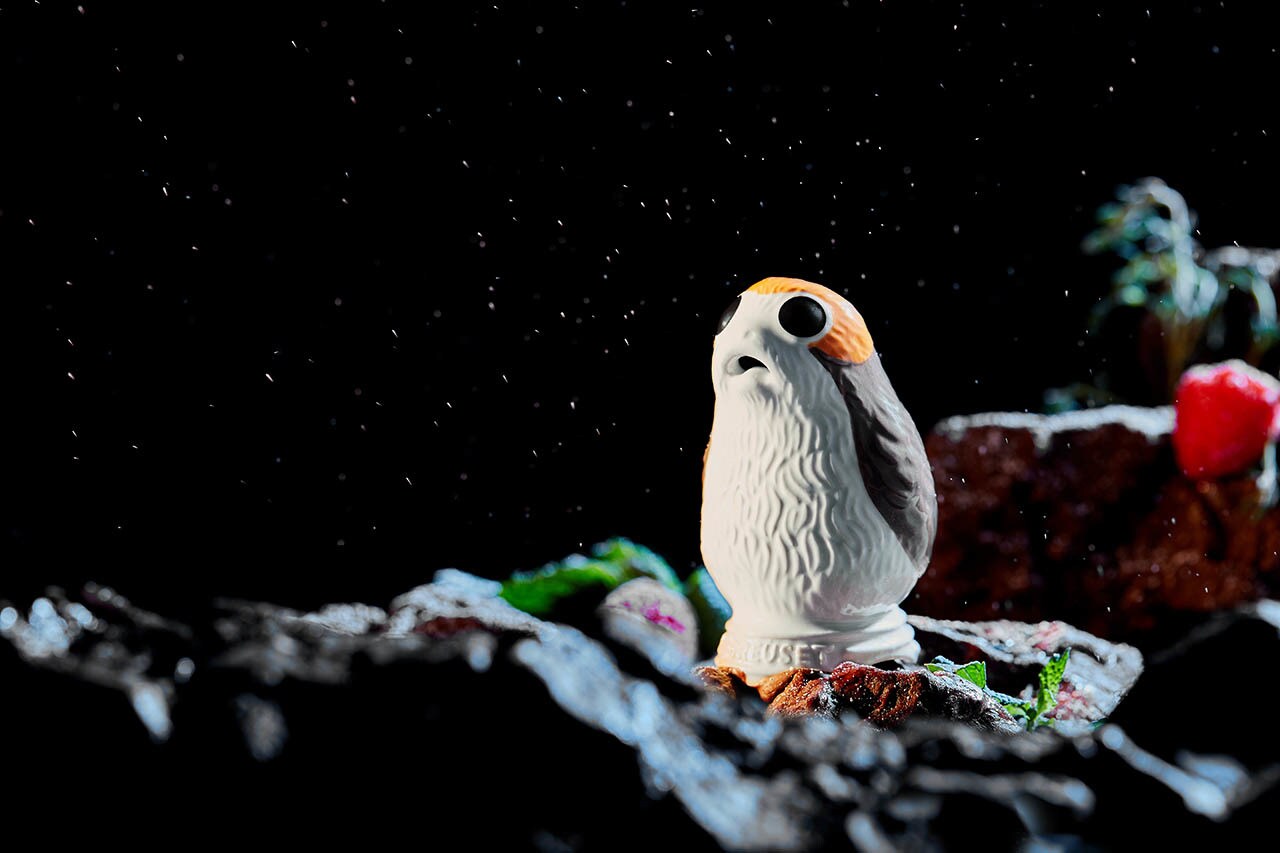 Four and 20 porglets baked in a pie

Although early design discussions considered creating a pie vent in the shape of Jedi Master Yoda with his lightsaber ignited, the team ultimately landed on a more obvious choice for a Star Wars twist on the classic pie bird funnel. By venting steam from the center of baking pies, the humble porg prevents fillings from bubbling over and releases steam for evenly baked, crisp crusts. Don’t leave Ahch-To without it!

Whitaker says designers took extra care to add texture -- the feathery features on the front and back of the porg pie bird body are individually hand carved before the stoneware clay is fully dried -- and refine the enameling process for the porg pie birds. A piece so small would normally be dipped or sprayed by machine in a single color, but this one called for four different hues to perfectly capture that curious stare. 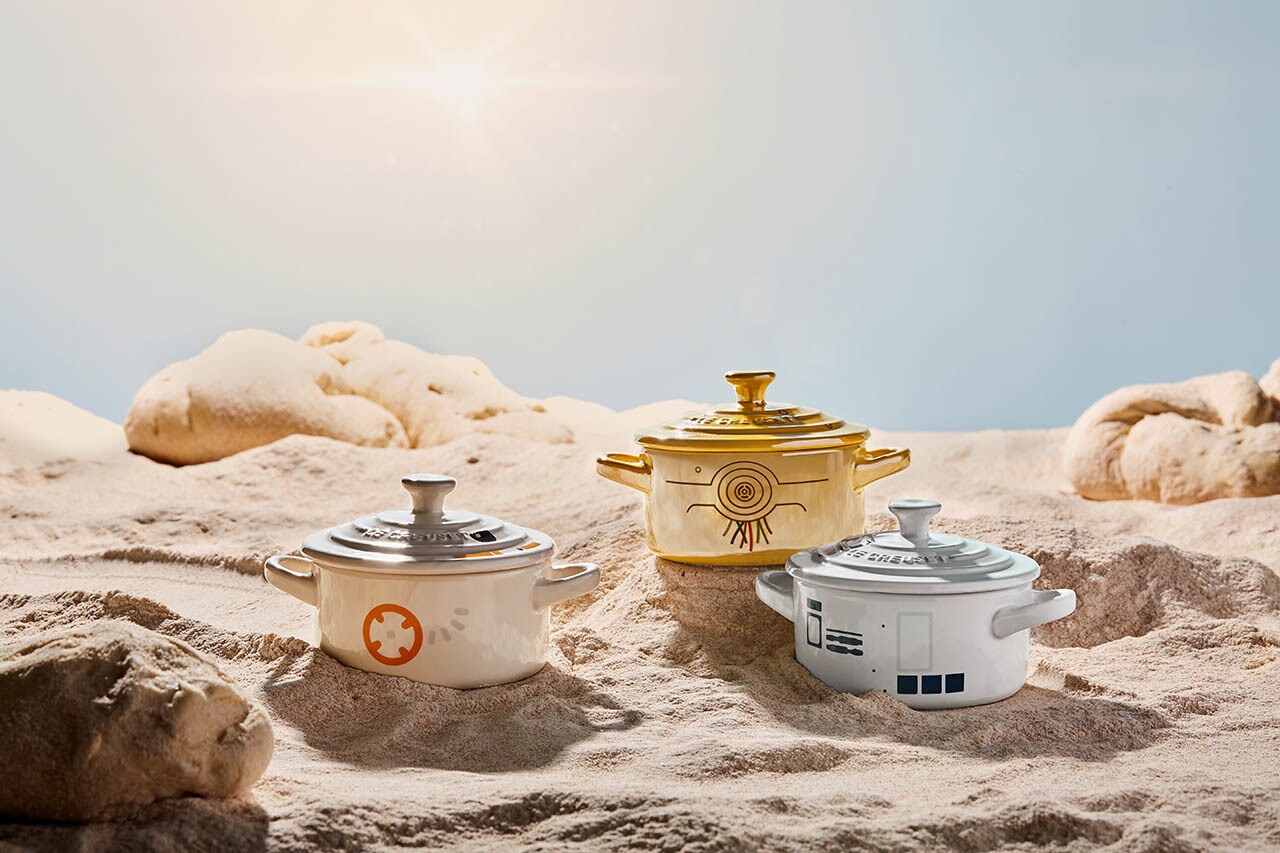 For a trio of mini cocottes, diminutive dishes designed for serving up snacks or individually-portioned desserts, Whitaker says C-3PO, R2-D2, and BB-8 were the perfect inspiration for the functional kitchen sidekicks. The stoneware is suitable for the microwave or the oven, with a lid that protects leftovers to be refrigerated for the next serving. But Whitaker notes that just like with droids, you must take care to maintain the dishes. Moving too quickly from cold to hot temperatures can damage the stoneware.

The finished look is an abstract take on the mechanical trio, with decal details that make them immediately recognizable but not overtly decorated. 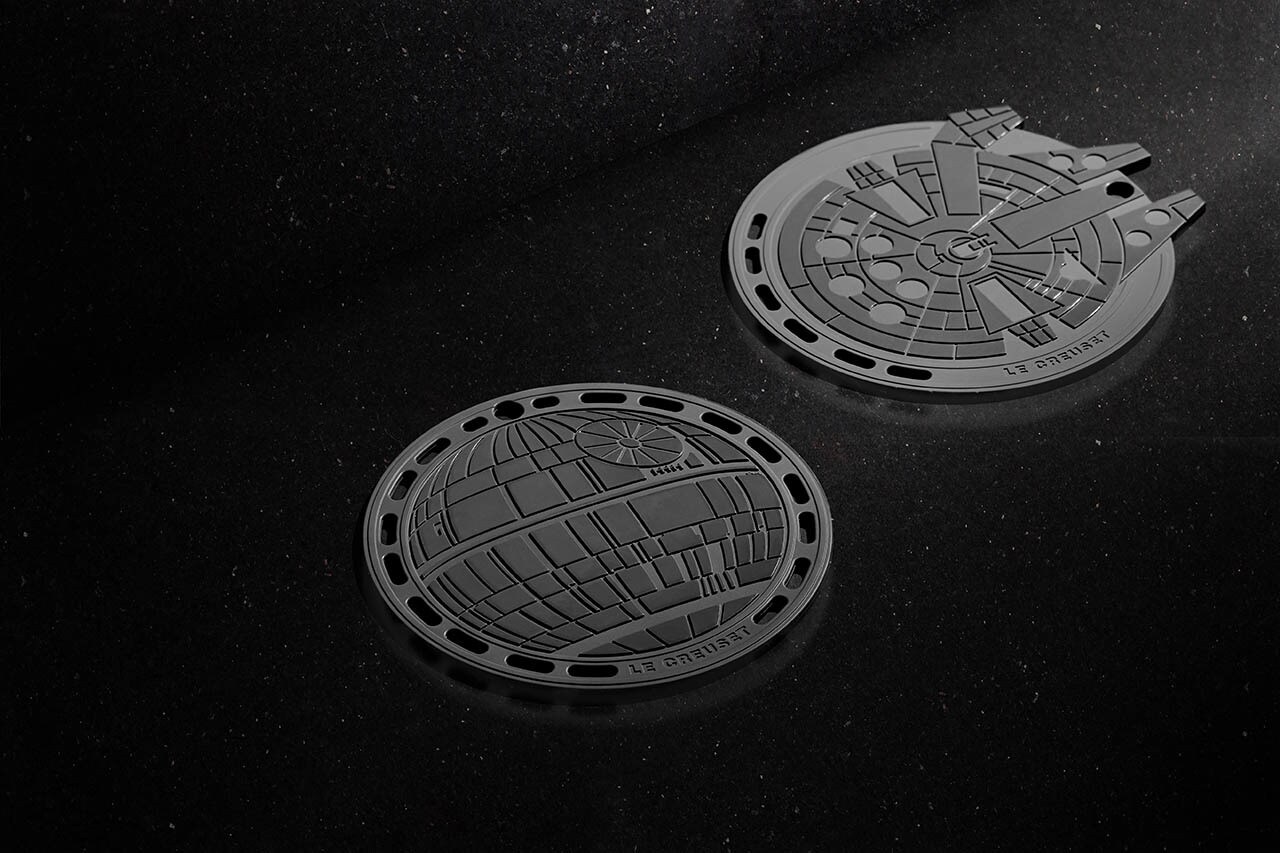 That’s no moon, that’s a trivet

Form and function collided once more for a pair of silicone trivets in the shape of the Death Star and the Millennium Falcon. For instance, the fastest hunk of junk in the galaxy includes markings for the sensor array dish, the off-center cockpit, and even cutouts to transfer heat that are placed quite fittingly where the ship’s exhaust ports would be!