Find out how the iconic denim brand became a part of the Star Wars galaxy in Star Wars: A New Hope and with its latest collection.

Levi’s have been a part of the fabric of the Star Wars galaxy since the beginning, when the costume for Luke Skywalker incorporated a pair of bleached white Levi's jeans into the standard wardrobe of a Tatooine moisture farmer. 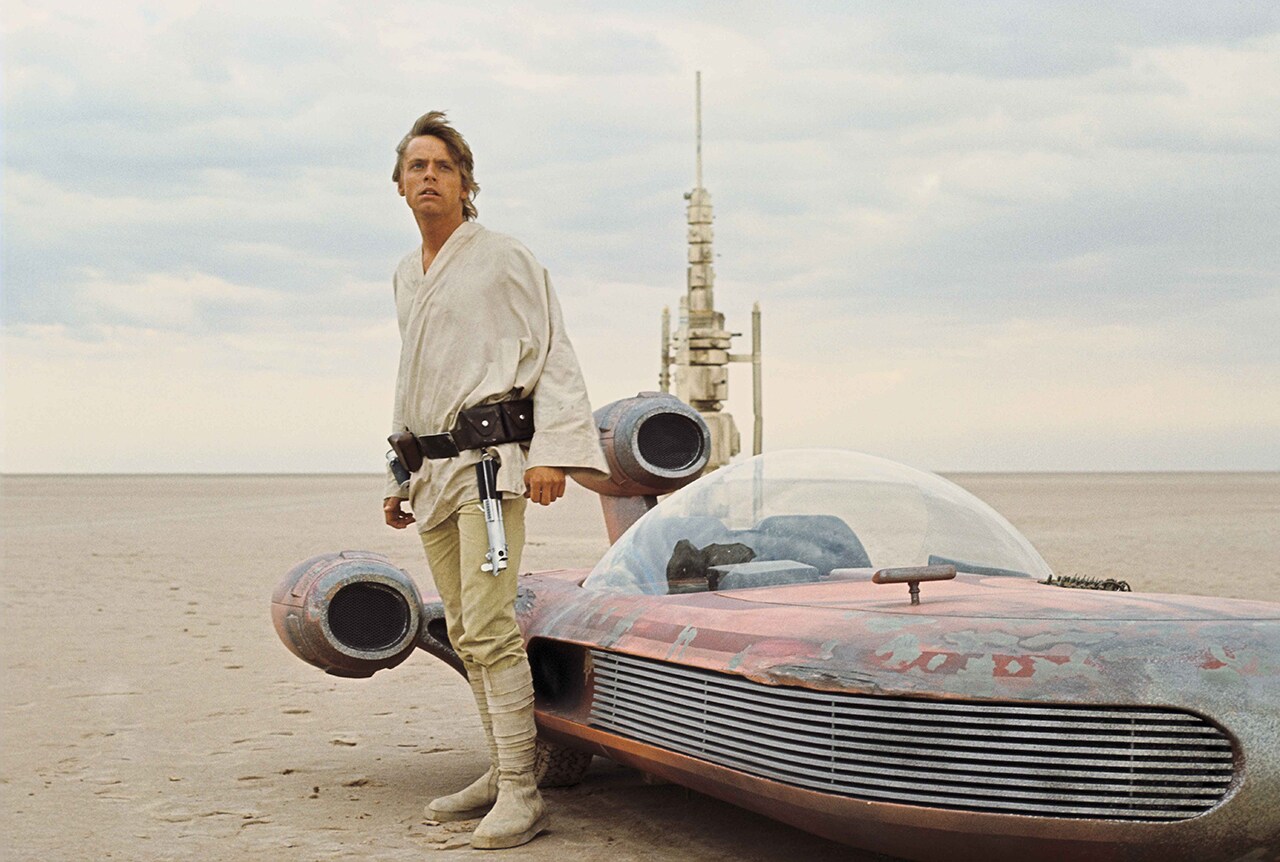 Jonathan Cheung, now the senior vice president of design innovation at Levi's, can still recall exactly how he felt seeing Star Wars: A New Hope unfold for the first time in the theater. “I remember being absolutely gobsmacked, open mouthed, breathless in the cinema when I watched it,” Cheung says. “It must have been 1977? And it remains, to this day, my personally most-watched film in a cinema. I watched it at least five times in its first release.” 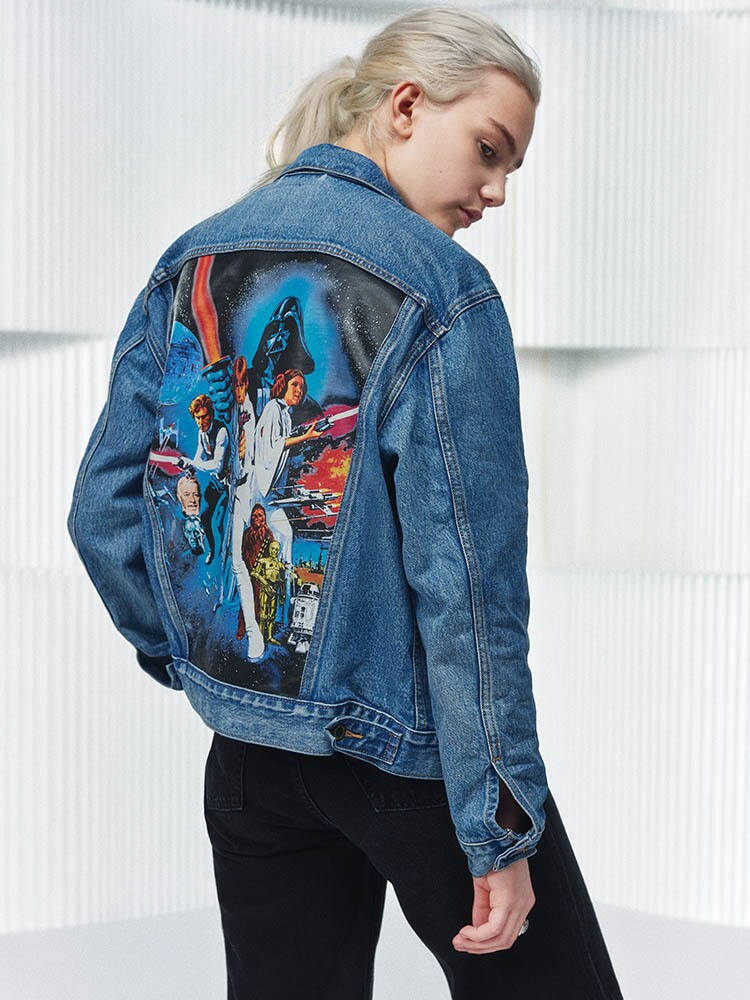 Flash forward more than 40 years later, and those shared histories have combined for the first Star Wars X Levi's collection, a new line that incorporates everything from subtle hints of the opening crawl woven into selvedge, the edge of the denim visible only at the cuff, to entire space battles printed onto fabric for a bold, standout look.

Spend a few moments talking to Cheung and it’s clear that he’s deeply invested in both the emotional pull of Star Wars storytelling and the storied history of denim as a pop culture staple. Levi’s didn’t just make the cut as part of Mark Hamill’s wardrobe in the first Star Wars film, the San Francisco-based denim maker was also worn by the crew behind the scenes. “So many people working on the set wore Levi’s, George Lucas being notably one of them,” Cheung says. The two brands joining forces now, at the end of the Skywalker saga, only seems natural. “If you’re from around these parts then your kind of default pair of pants are Levi’s. That’s how the Luke Skywalker pants came about. They’re the default option.”

Cheung recently sat down with StarWars.com to talk about his philosophical approach to the new collection, the aptly-named denim Jedi on his design team, and exactly how he felt walking into Lucasfilm for the first time.

At its core, the new collection is Levi’s standard issue, infused with new prints, buttons and looming details, and unexpected plays on Star Wars quotes and nostalgic imagery. “Essentially it’s kind of T-shirts and jeans, which is the Levi’s uniform,” Cheung says. But it’s anything but business as usual. 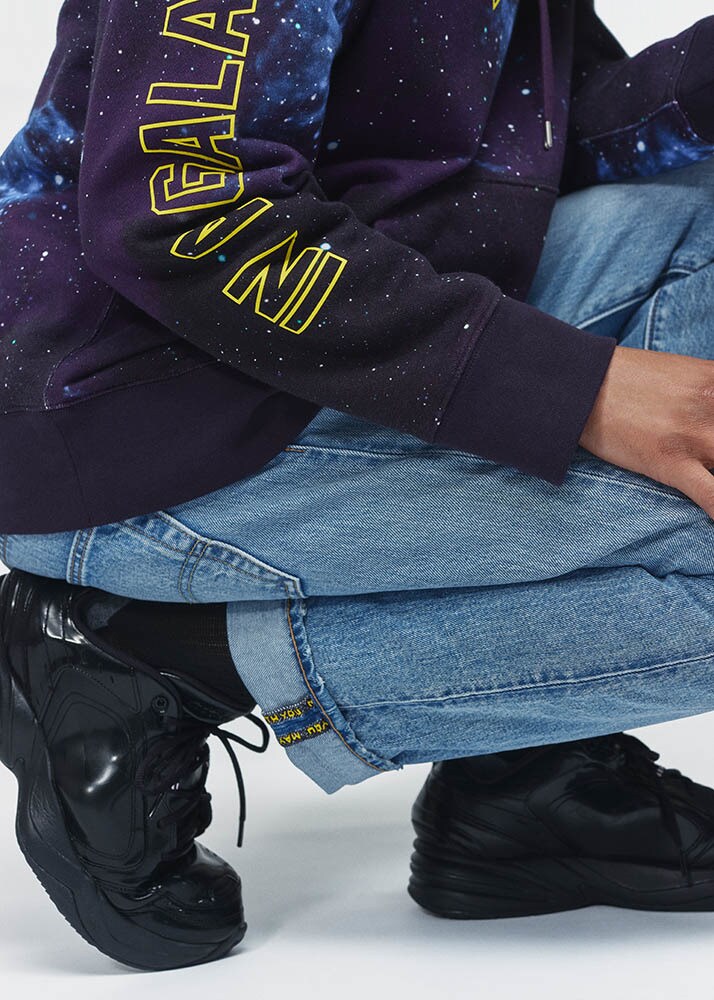 For the subtlest piece in the collection, a special loom was used to weave “May the Force Be with You” in black and yellow on the selvedge, typically the red line at the ankle of a pair of jeans that marks the edge of the weaving at the seam. “It is such a universal uplifting phrase, you know?” Cheung says. “It’s the kind of thing you might tell yourself or your children before you face a particular challenge.” And the technique itself invokes “several layers of nerdiness” in terms of the history of Levi’s denim and weaving processes overall. “It tends to be much more rare and much more expensive and I think we went the extra mile with this by customizing that selvedge,” Cheung says.

Leave them uncuffed and no one will even know you’re wearing a piece of Star Wars apparel. “It’s their personal secret. If they didn’t cuff the jeans up, no one would know at all. So we wanted that as well. If you know, you know.” 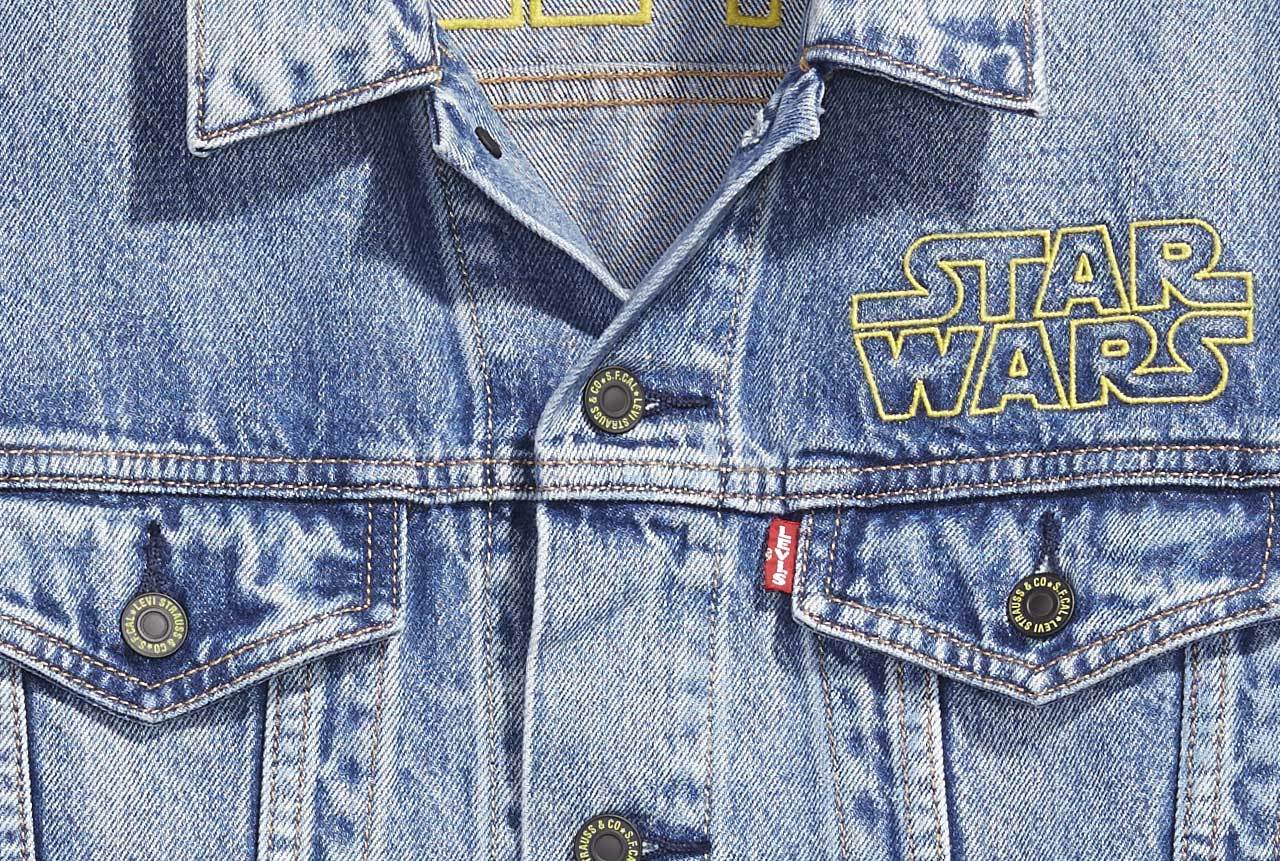 Pieces in the line also include customized buttons in the same hue as the crawl. “The buttons are black with yellow writing, which is unique for this. We’ve never done that.” 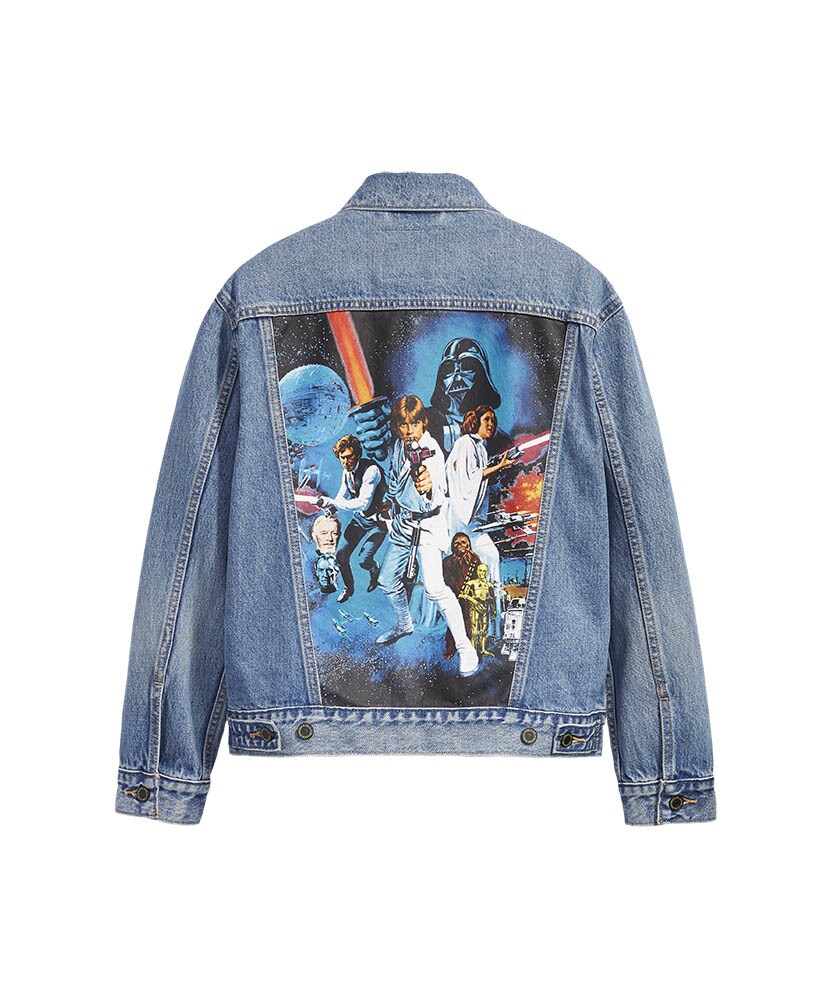 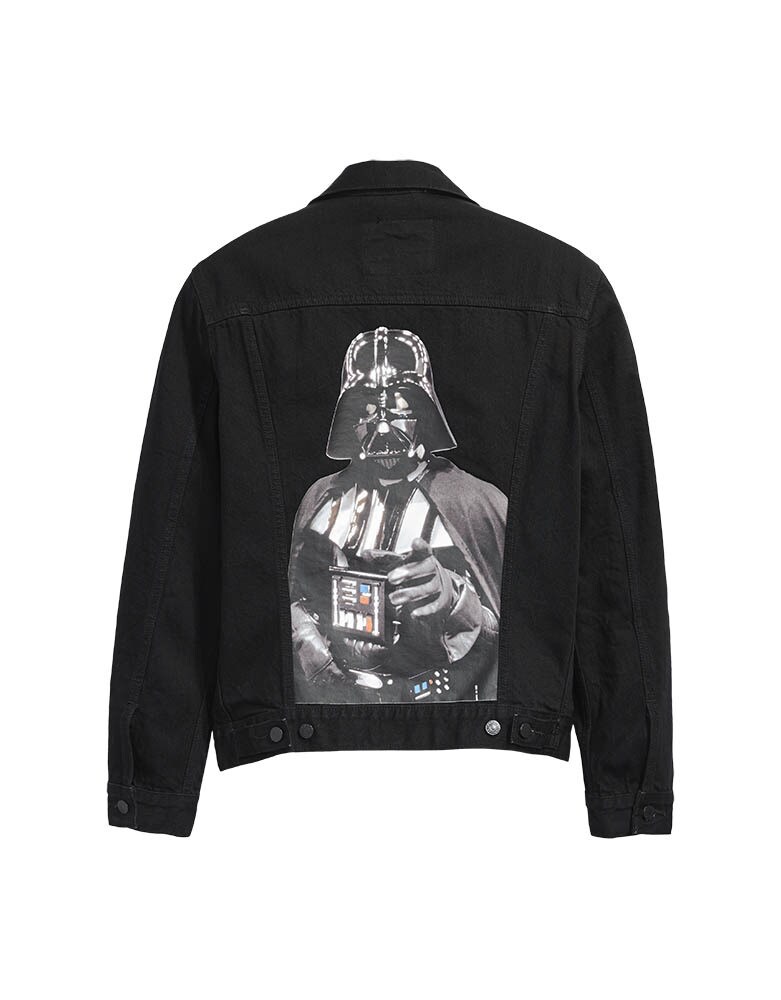 Standard-issue denim jackets have an added pop of color on back panels printed to recreate one of the very first posters for the films among other designs. Cheung says the poster piece in particular was intended as a nod to fans customizing their own denim jackets for years. “We were looking to recreate fan-made vintage,” Cheung says. “There’s a future-vintage flavor to it. You can’t quite place the timeline. It feels very familiar and has that nostalgia but also it’s new.” 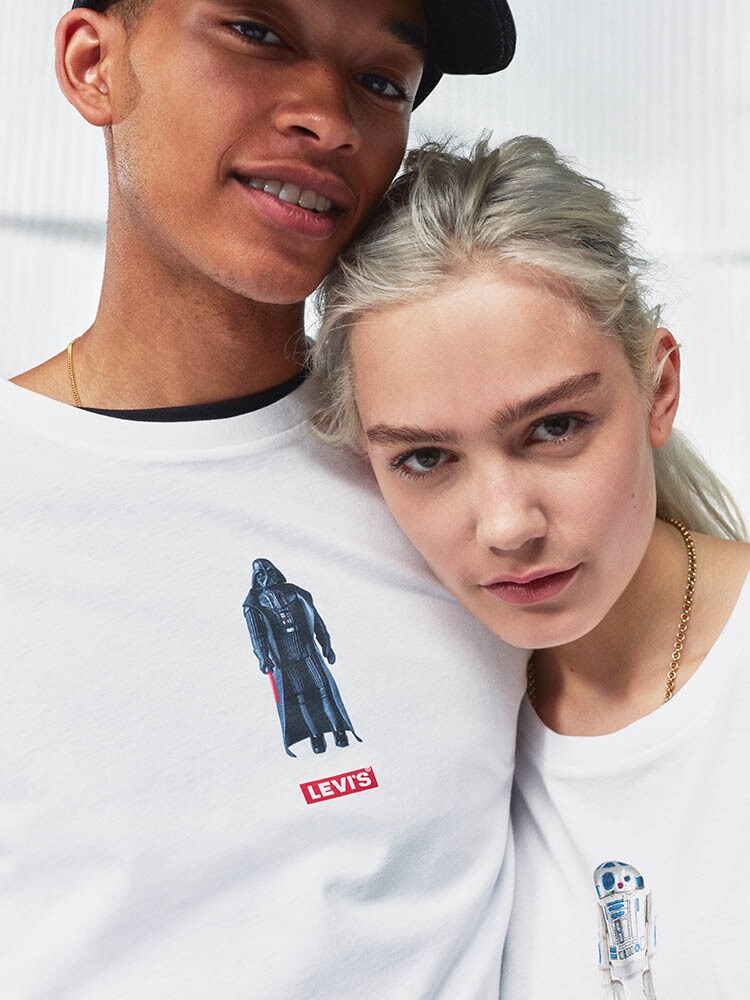 A few of the shirts and pullovers incorporate images of the original Kenner action figures that captured so many imaginations when the films were first released. “We wanted to evoke this feeling of delight,” Cheung says. “We wanted to find a connection that wasn’t obvious. ‘Oh wow, it’s different!’”

Cheung issued the same marching orders to his denim Jedi when it came to capturing quotes running down long sleeves. For instance, one pullover has a quote from Chewbacca: "Ggwwwrghh!"

“Obviously the quote for Chewie becomes somewhat of a challenge,” Cheung says. “We have a very hirsute graphic design lead who I suspect has some Wookiee DNA and he was able to give us the Wookiee quote. Like Han, he speaks Wookiee.”

Other quotes are a little more quotable. “The quotes have become part of Star Wars’ fingerprint on popular culture,” Cheung says. “We wanted to have this little bit of irreverence and sense of humor and self-awareness and a bit of irony around the pieces.”

Portrait of a princess

Some pieces also incorporate character portraits, including Chewbacca windswept on Hoth and a classic black-and-white portrait taken of Carrie Fisher in her full Leia costume behind the scenes.

“I think Chewbacca is basically the Cindy Crawford of Wookiees,” Cheung jokes. “It looks like a high-fashion shoot so we were determined to get that in.” 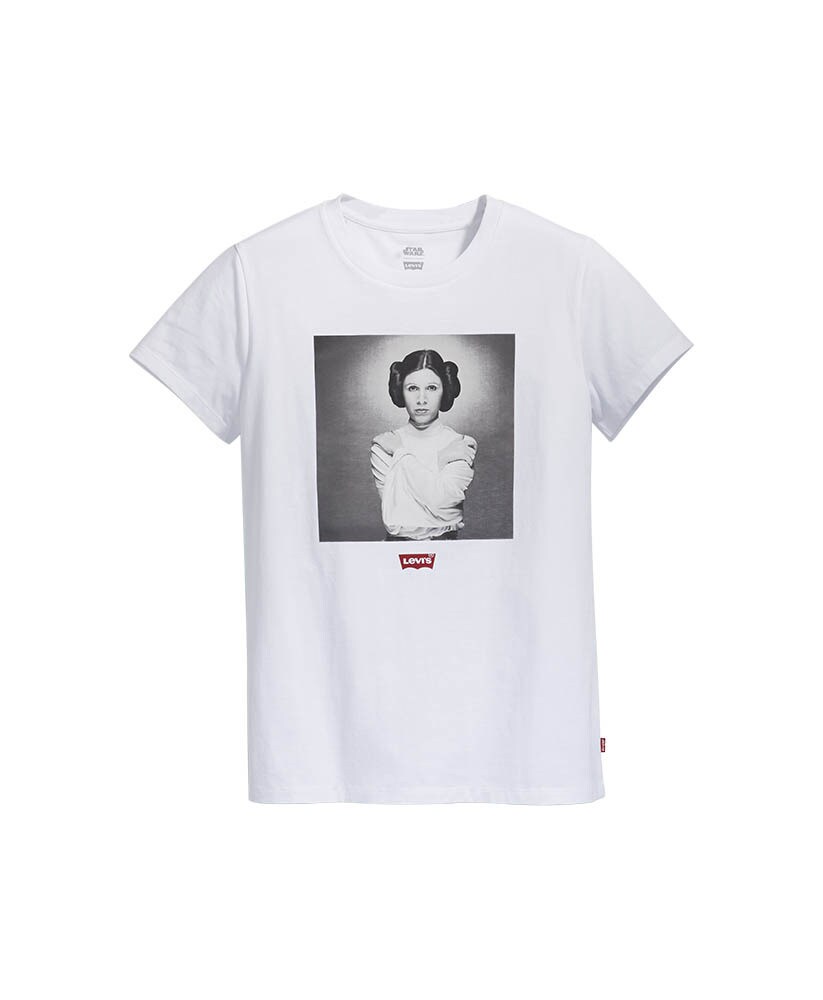 For the Leia piece, Cheung says it was about evoking the strength of both the character and the actor who portrayed her. “We wanted to pay respect to Carrie Fisher and also what Leia stood for, so we were looking for an iconic image that kind of projected that. There were quite a few we could have used. That was the one we landed on. A real strong portrait of Leia."

A battle for the ages 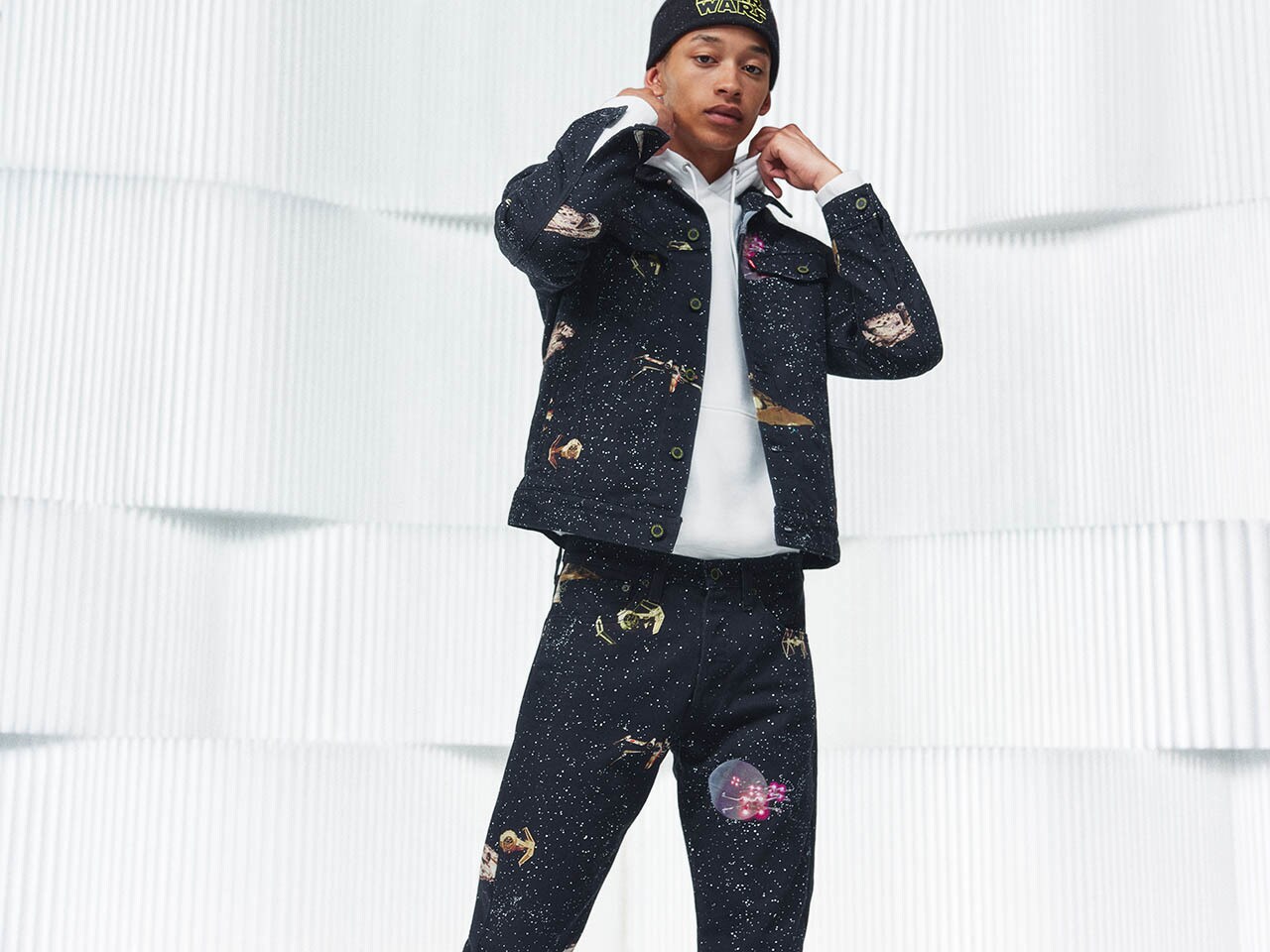 One of the collection’s most stand-out prints is a nod to the two powerhouse brands, “icons meeting icons,” Cheung says. Trucker jackets and 501 jeans became the canvas for a print that pays homage to one of the first film’s most enduring sequences -- the Rebel Alliance versus the Death Star dogfight. “That’s the highlight of the first movie and one of the most iconic pieces of cinematic history of all time,” Cheung says.

“Let’s put it on one of the most iconic pieces of clothing.” 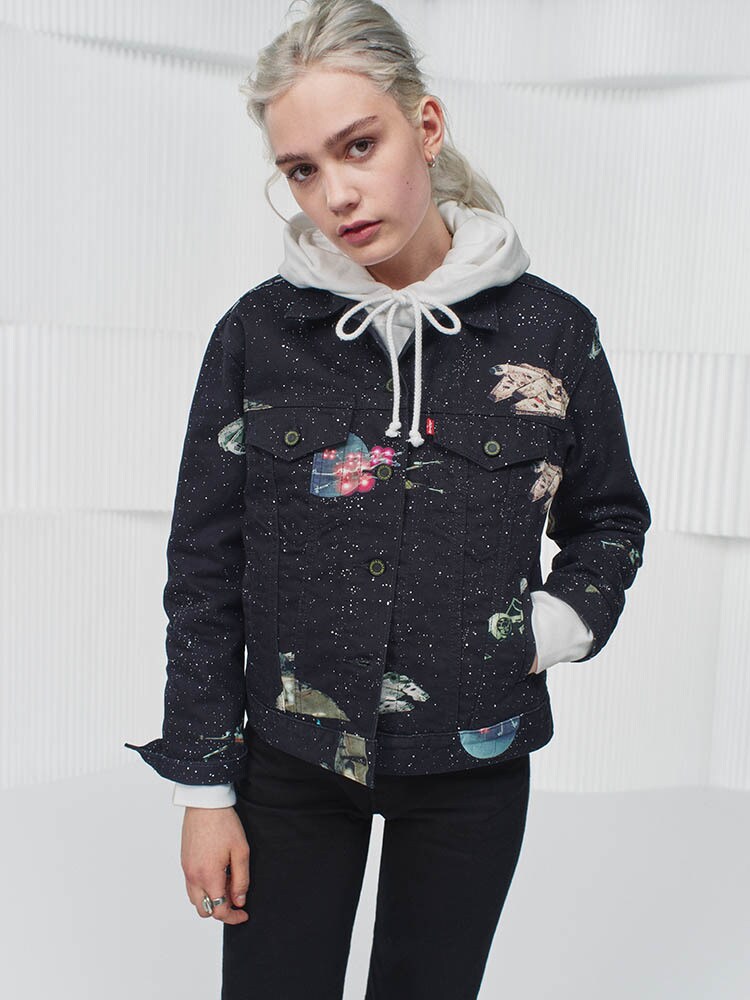 The result is a star field-covered ensemble dotted with X-wings, Star Destroyers, and the Millennium Falcon. “What that creates is this amazing starry outfit that’s quite spectacular and I hope people feel the exhilaration and the thrill of it just as much as we do.” 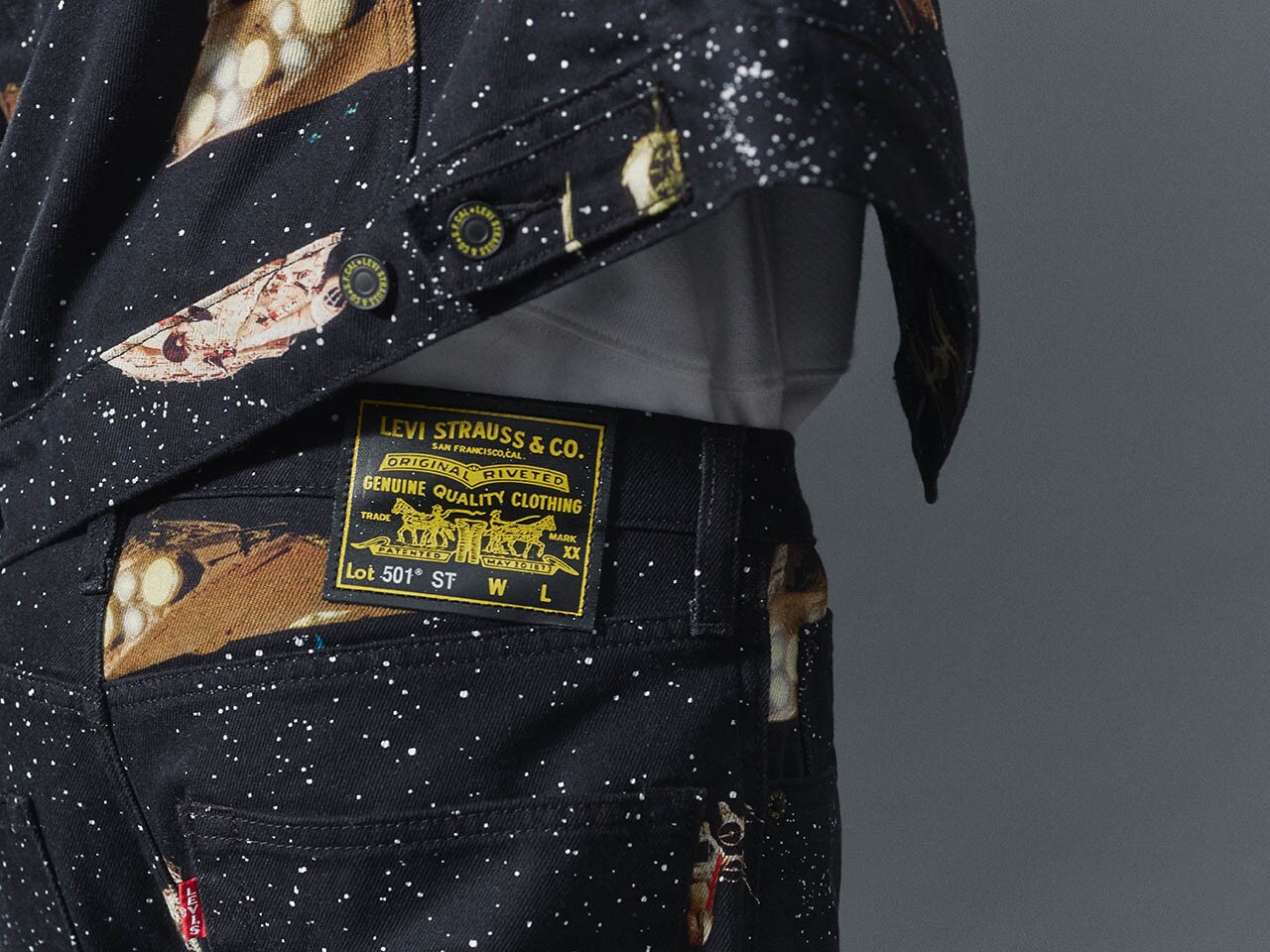 At the outset of any new collaboration, Cheung says he and his designers are always aiming to infuse their work with heartfelt sentiment. “I’m always looking for shared history and our design time is always looking for meaning,” he says. “We want to do something that’s more than just logos on a T-shirt. So any kind of backstory or relationship that we can find…it provides a subliminal backdrop, inspiration and a ground of authenticity to the creative process.”

He could hardly believe his luck the first time he walked the halls of Lucasfilm to begin discussions. “Pinch yourself. Is this really happening? I’m presenting myself like senior vice president of design,” he says with a very serious tone. “And then inside there’s the 10-year-old kid inside me at that cinema screaming my head off.” 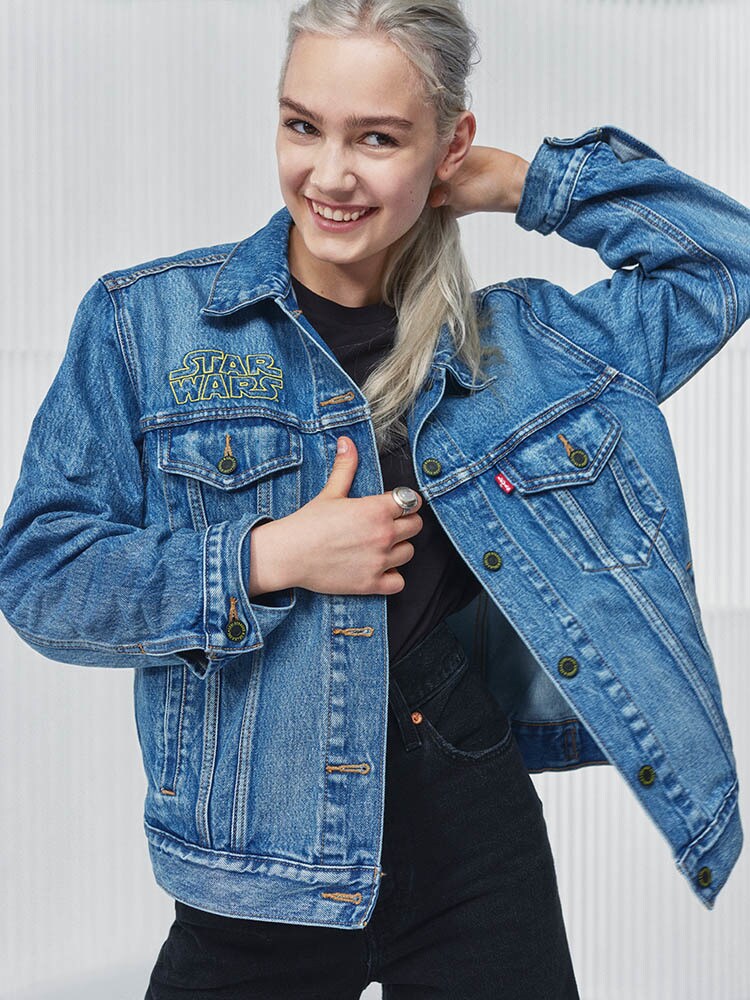 Now with the collection about to drop, he can’t wait to begin seeing the response from fans of both brands in stores, on the streets, and inside theaters for the first showings of Star Wars: The Rise of Skywalker. “It’s such a mix of incredible gratitude and the awareness that we are building another slice of culture both for the Levi’s archive and our legacy and the Star Wars legacy as well. It becomes part of the extended Star Wars family so I think it’s a very, very special thing. I feel like it’s creating history, a moment in pop culture.”

“We always want to go in as fans. We want people to feel the love and the excitement and the exhilaration and the pinch-yourself specialness that we genuinely feel. We feel that if we go in with that, some of that will come out in the end. And I certainly believe that has.”

Shop the new Star WarsX Levi's collection starting November 1 and check out even more images from the collection below! 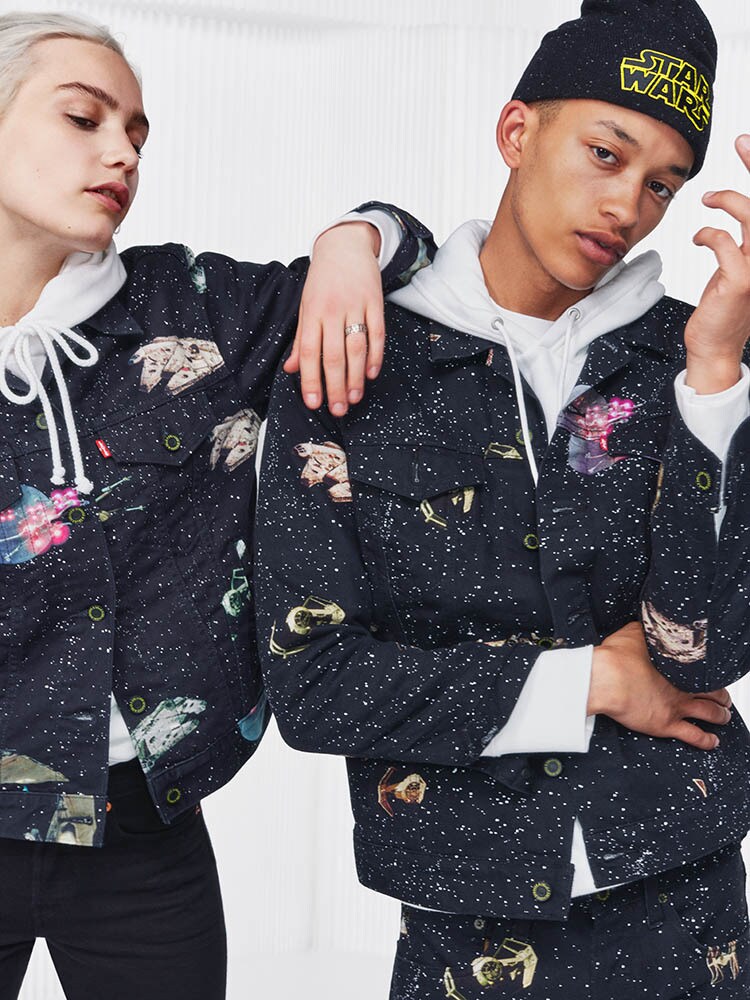 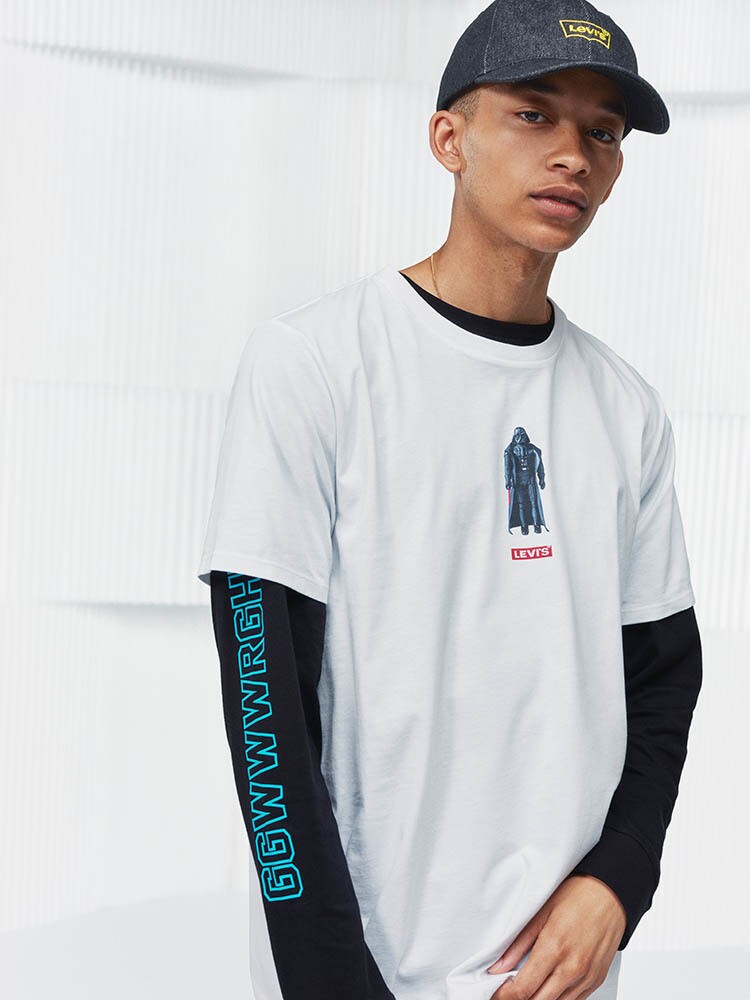 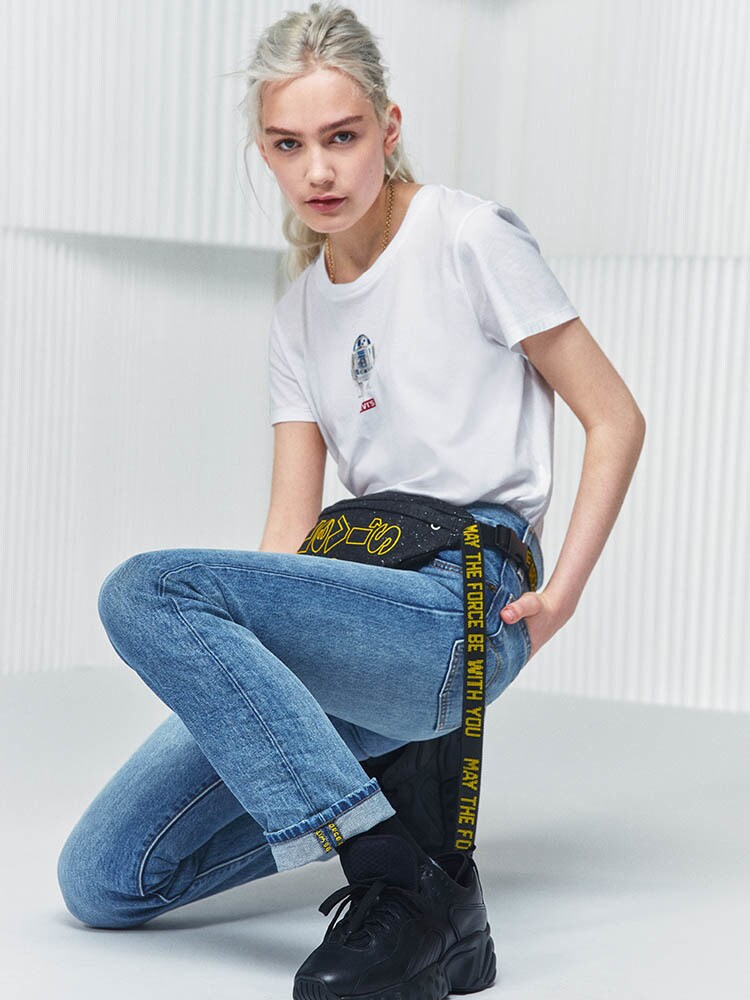 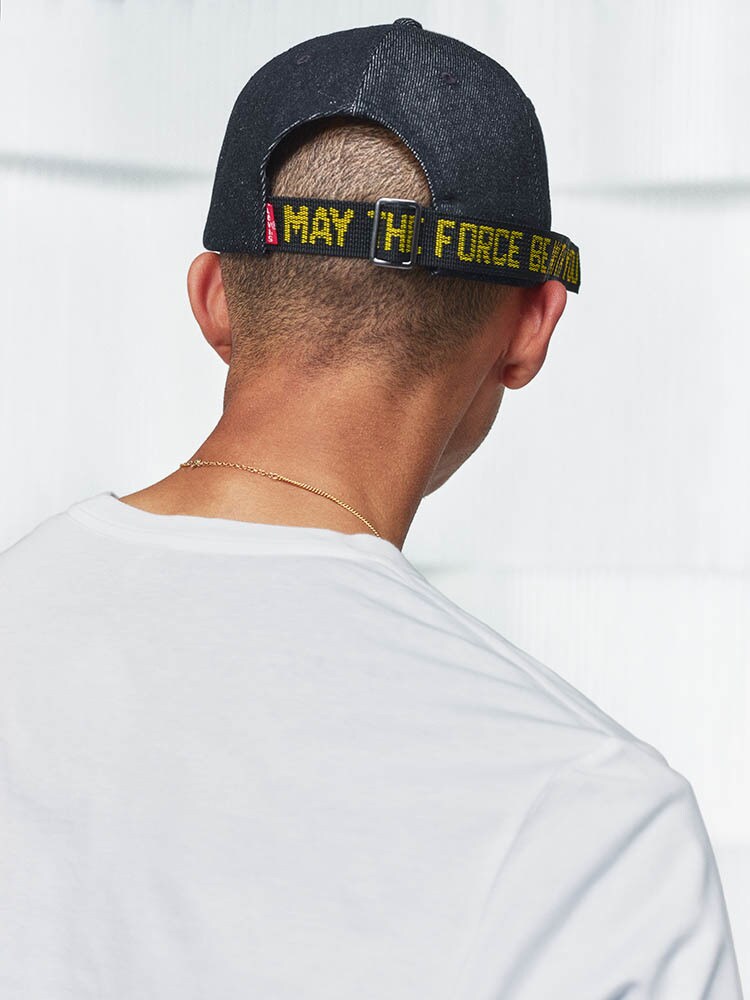 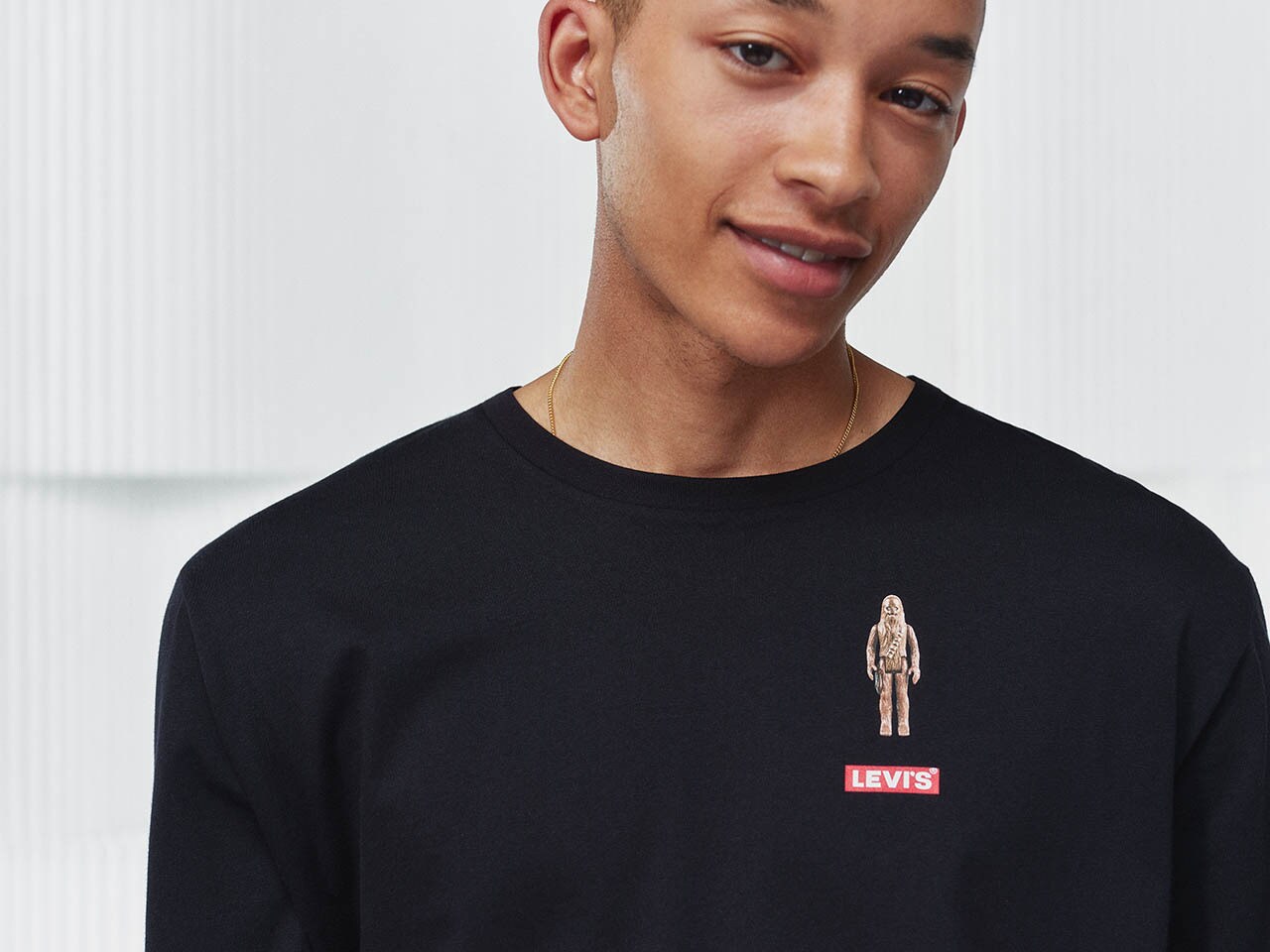 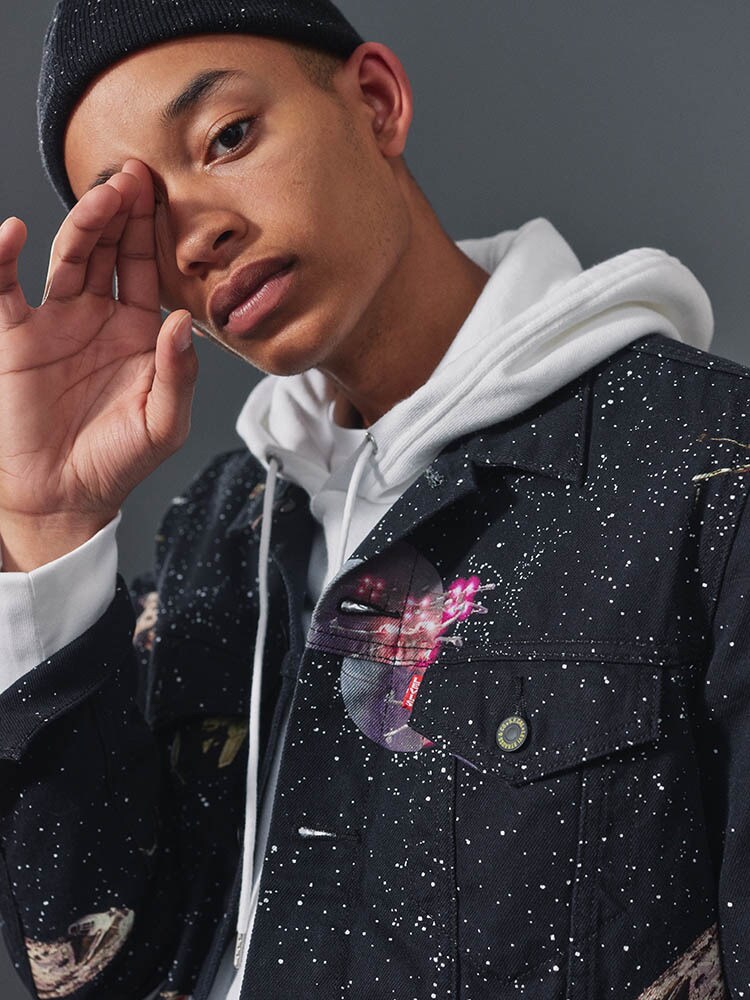 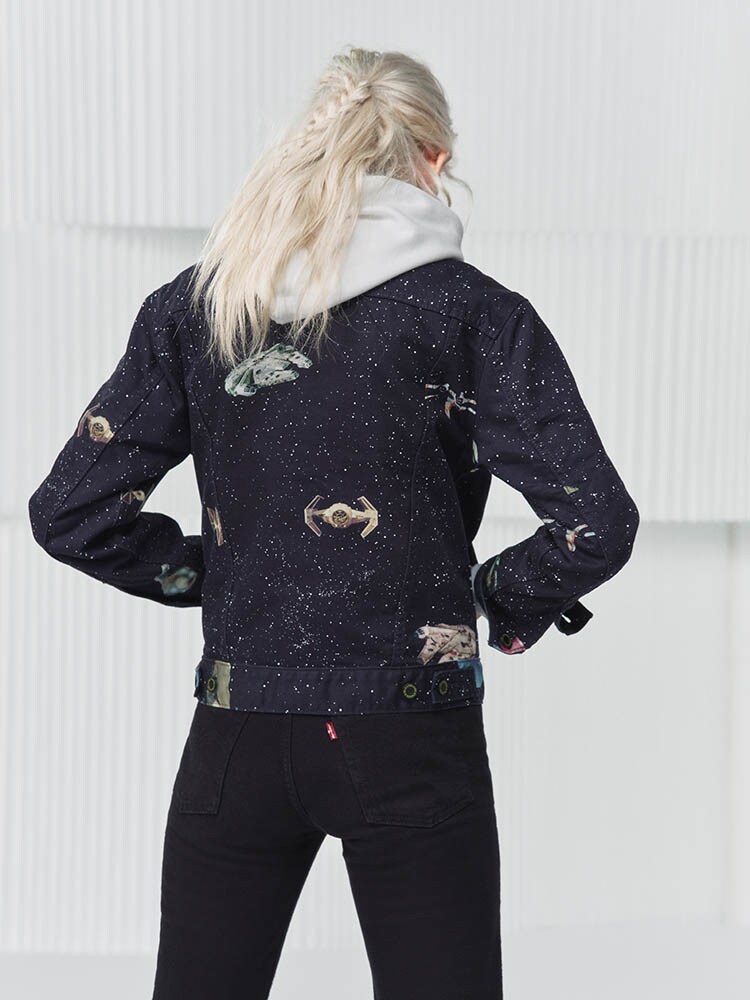 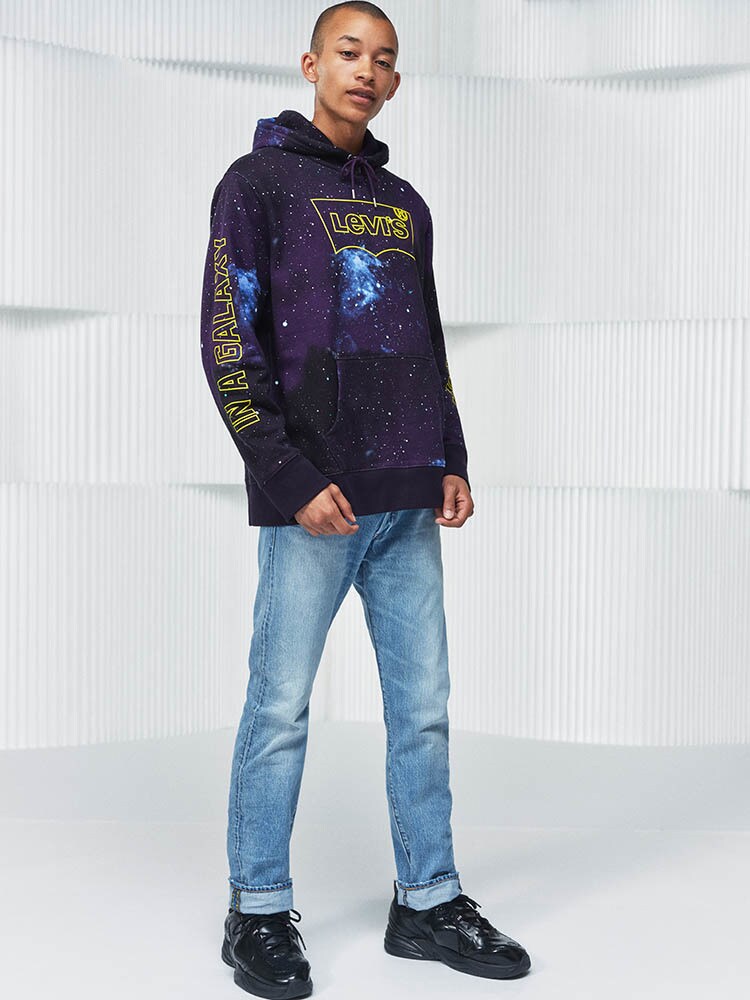 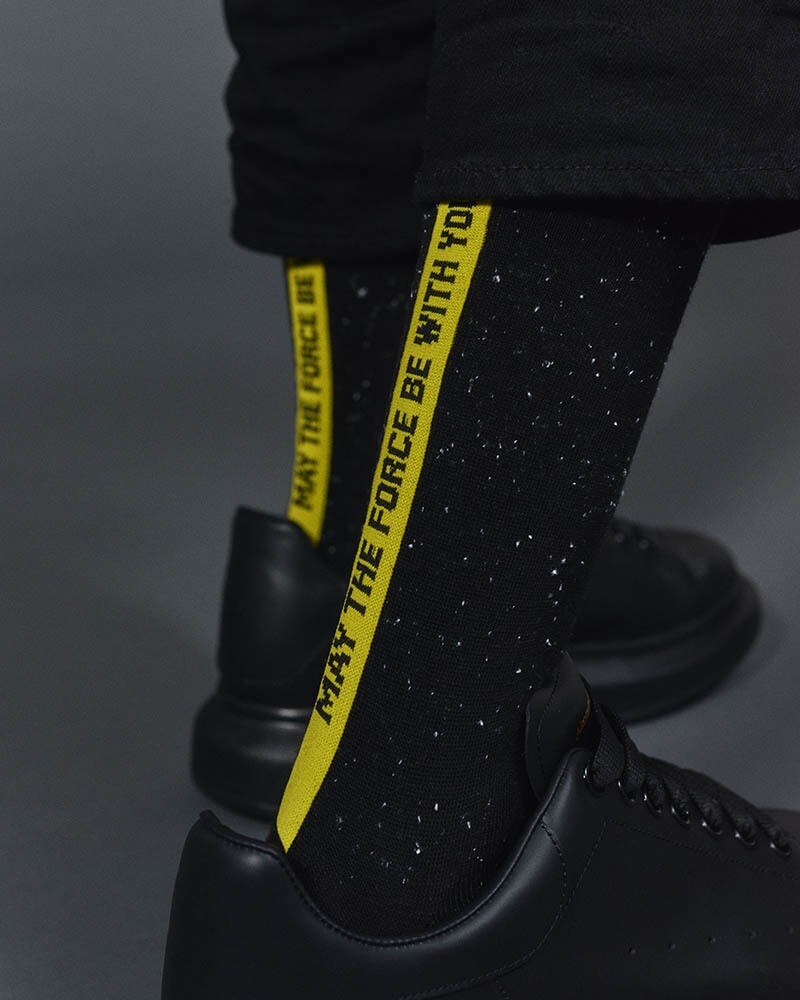 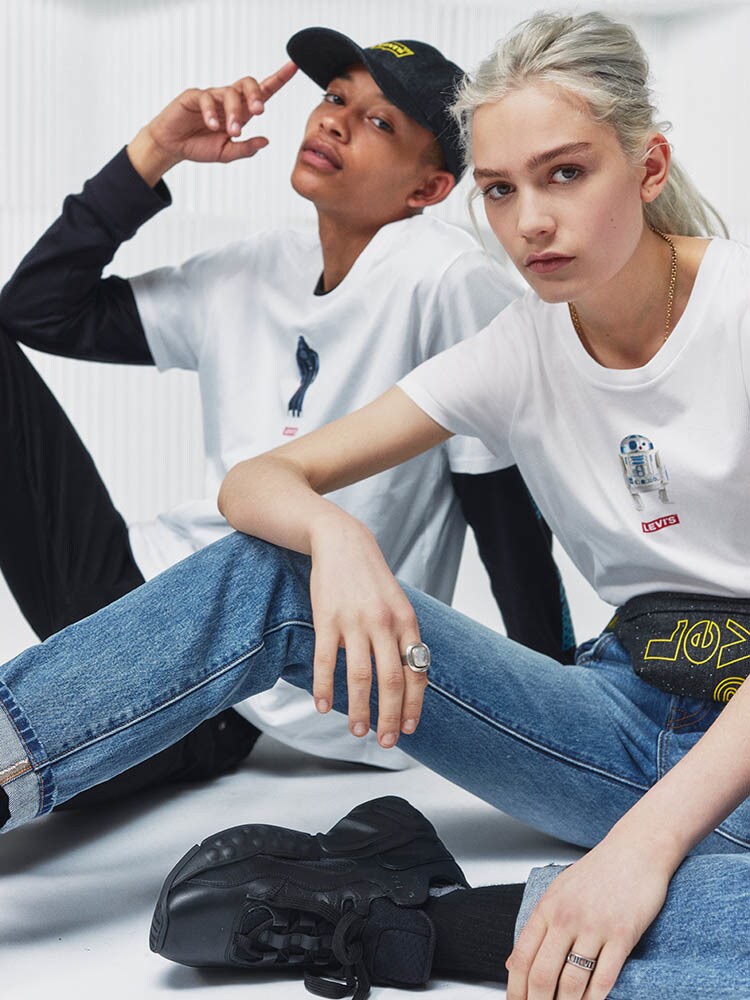