Much to Learn You Still Have: 8 Things You Might Not Know About Hutts

Just how heavy is a Hutt? How do they pay for that lavish lifestyle? How did they even puppeteer Jabba? Find out now!

There’s probably not much I can say that will sway your opinion about Hutts. They’re slimy, prone to nauseating sounds and habits, and, to top it all off, they’re rotten criminals. But hey! That makes for one really interesting Star Wars alien species. Think you already know all the horrifying Hutt details? Let’s find out!

1. They were heavily influenced by classic film characters.

Of course, we have to start with the very first and most notorious Hutt in the Star Wars galaxy. His proper name is Jabba Desilijic Tiure, but his friends (if he has any) and victims know him just as Jabba. George Lucas’ initial concept for Jabba began as a desire to create a “sultan-like” character who was feared for his size, power, and status among commoners.

“There’s always been rotund, evil sultans who sit on their beds while others are tortured in front of them,” Lucas described. He gave the examples of Sydney Greenstreet (The Maltese Falcon) and Marlon Brando (The Godfather) as inspiration for the crime lord and designer Nilo Rodis-Jamero couldn’t get past putting Jabba in a suit, á la the traditional, machine gun-wielding gangster. Ultimately Phil Tippett won over Lucas with his maquette of the slimy slug but it wasn’t easy. At first a more worm-like creature was actually deemed “too terrible” and a version with forearms was “too human.”

Fun Fact #1: Ziro the Hutt of The Clone Wars fame was also inspired by a classic film. During his death he mutters, “what a world, what a world!" in a nod to the Wicked Witch in The Wizard of Oz.

2. It took four tons of clay to construct Jabba...

Once Jabba’s design was nailed down, then came the hard part -- actually building him. That heavy responsibility was given to Stuart Freeborn and John Coppinger and the two were assisted by four tons of clay, foam latex, and an oven that was once an old safe. The chemicals were pretty toxic, requiring contractors to wear masks, helmets, breathing apparatus, and white suits. The completion of Jabba inched very close to the deadline, causing directors to seriously worry whether the crime lord slug would make it into the picture. Freeborn insisted they’d make their deadline, and they did, finishing the last paint job just the weekend before the scene was scheduled to be shot. 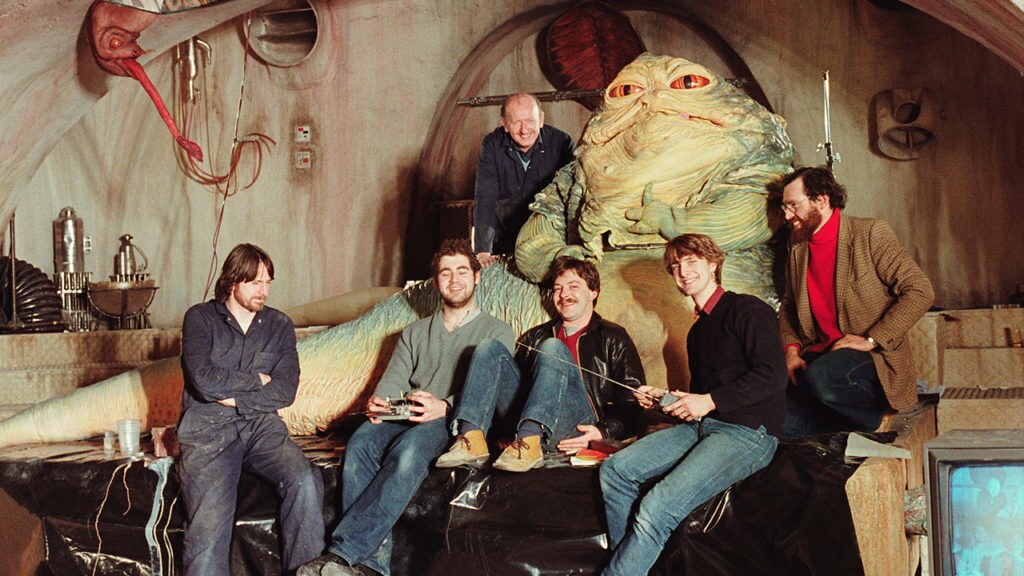 Due to the massive size of Jabba, one puppeteer pulling the strings obviously wasn’t enough. It actually took three operators crammed inside of Jabba’s body to get the vile villain moving. After Jim Henson’s Dark Crystal wrapped up in the very same studio, there was thankfully an abundance of talented creature shop puppeteers to bring Jabba to life. Toby Philpott operated the left arm and head, Mike Edmonds operated the tail, and David Barclay controlled the right arm, mouth, and even spoke Jabba’s lines in English to be played over the PA system. Getting the three men into the puppet was the tricky part. There was actually a hole beneath Jabba’s body that they could climb up into, but with a wooden set and flammable materials, firemen were standing by in case of an accident. Each operator had a headset and a monitor inside the creature so they could see exactly what their movements looked like on camera. The trio actually had to spend 8:30 a.m. to 6:00 p.m. inside the slug’s body, only breaking for lunch and tea.

4. They're not always that obese.

The word Hutt has become synonymous with gargantuan (Jabba weighs almost 3,000 pounds!), but did you know that they’re not always that massive? Baby Hutts, or “Huttlets,” start out around 1 foot 5 inches (.43m) in height as seen through Jabba’s adorably disgusting infant son Rotta. The award for largest slimy beast we’ve seen goes to the female Hutt, Mama, who measures an amazing 14 feet 10 inches (4.52m). Hutts do come in varying shapes and sizes surprisingly enough. The antique-collecting Grakkus, who tasked an inexperienced Luke Skywalker with opening a Jedi holocron, is the most unique looking Hutt I’ve come across. He has a strong, muscly build, and, to make him even stranger, cybernetic legs!

Fun fact #2: One of the inspirations for the character of Mama came from Pearl, the obese vampire in the 1998 movie Blade.

5. Their homeworld gets as slimy as they do.

Most Hutts call Nal Hutta their homeworld and if you know anything about it, it’s a pretty perfect environment for this nasty species. This wasn’t an accident, of course. When it came time to create the Hutt’s environment for The Clone Wars, Lucas gave supervising director Dave Filoni a few tips. First, it needed to be swampy to match the natural sliminess of its inhabitants. Second, he wanted their extravagant palaces to be built in nothing less than giant, pustule, orbs that would stick up from out of the ground. If you’re not feeling queasy yet, add in a climate of actual greasy rain and dragonsnake-filled bogs to make a planet truly fit for a Hutt.

6. They wear animals as fashion statements.

If you haven’t taken note of the lavish parties and flashy lifestyle Jabba and his relatives live, you should know the Hutts like to indulge -- and not just on frogs. It’s common for the crime bosses to force Twi’leks to put on shows, and as seen in The Clone Wars episode "Hunt for Ziro," sometimes wear creepy Hutt-faced head dresses. Clearly the creatures are vain -- despite their grotesque appearance. So vain that they try to hide the fact that they can’t grow hair by wearing animals called Sha’rellian Toops on their head. Both Marlo and Mama don the headgear, the latter stacking a whopping 23 creatures on top of her head.

Fun fact #3: Speaking of vanity, albino Hutt Oruba clothes himself in the finest, most extravagant attire to hide his pale and unsightly chafing skin.

7. They have their own form of currency.

You may ask yourself, “How can I live as lavishly as these Hutts?” Well, having your own form of currency separate from Republic credits definitely helps. Wupiupi are golden coins that are often acquired by conning reckless pirates. Some other illegal activities Hutts dabble in include buying and selling slaves, smuggling goods, or gambling it all on the podraces. To give you a sense of what wupiupi is worth, seven of them will get you a single gorg, or large amphibian to snack on from the stalls of Mos Espa Market. The Hutt Council does have their own accountant to take care of all this wupiupi. His name is Gorga, and you can’t miss him. He’s the only Hutt dapper enough to rock a monocle.

8. Their nasty noise was created by a familiar food.

If you read this column often you’re probably familiar with hearing all about the legendary sound genius of Ben Burtt. Burtt is responsible for taking ordinary household objects and making them into some of the most iconic sounds in film history. When tasked with creating the soundtrack for the nastiest Star Wars alien yet to be conceived at the time (Rogue One’s Bor Gullet gives Jabba a run for his wupiupi!), he turned to a bowl of good old-fashioned comfort food made by his very own wife. In Burtt’s own words, the slurpy sound was “macaroni and cheese being fondled in a bowl.” If you used to really love macaroni and cheese, I apologize.

Fun fact #4: Jabba’s laugh was a combination of humans, hippos, hyenas, and more elements blended together.

How’s that for a healthy dose of Hutt? Let me know what I forgot in the comments below. Craving more? Peruse the StarWars.com Databank or rewatch The Clone Wars episode “Hunt for Ziro” for a good glimpse of Hutt life...including romance!

Much to Learn You Still Have Hutts Lists