Thanks to HasLab and Fans, Jabba’s Barge Sets Sail

As the massive Hasbro creation prepares for delivery to nearly 9,000 backers, StarWars.com gets a glimpse at the finished toy masterpiece.

Reclining on his throne aboard the Khetanna, Jabba the Hutt gripped his microphone and growled the final death sentence for Luke Skywalker and his friends hovering just above the Sarlacc pit. But moments later, the execution turned into an escape, leaving the mighty Jabba dead at Leia’s hand and his opulent sail barge imploding in the sands of the Dune Sea.

When Jabba’s sail barge, HasLab’s first crowd-sourced project, hits doorsteps early next month, the painstakingly detailed Hasbro toy vehicle will allow fans of all ages to recreate this scene in Return of the Jedi, right down to a series of hinged shutters perfect for Threepio to peek through.

It’s been just over a year since the project was first announced, a proposal to make the nearly 4-foot-long toy barge a reality for the first time ever with the help of dedicated backers supporting a 5,000-piece manufacturing run.

Since then, less than 10,000 have rolled off the assembly line, a delicate balance of plastic tooling and handcrafting that captures the minute details glimpsed on film and builds upon the legend of Jabba’s opulent ship with new details and immaculately crafted, functional parts. For Chris Dern, Lucasfilm’s senior manager of product development, the project demonstrates the dedication of the toymaker’s design team, a longstanding partnership and collaboration with Lucasfilm, and the love of the fans, who had clamored for years to see Jabba’s sail barge join their motley crew of action figures. 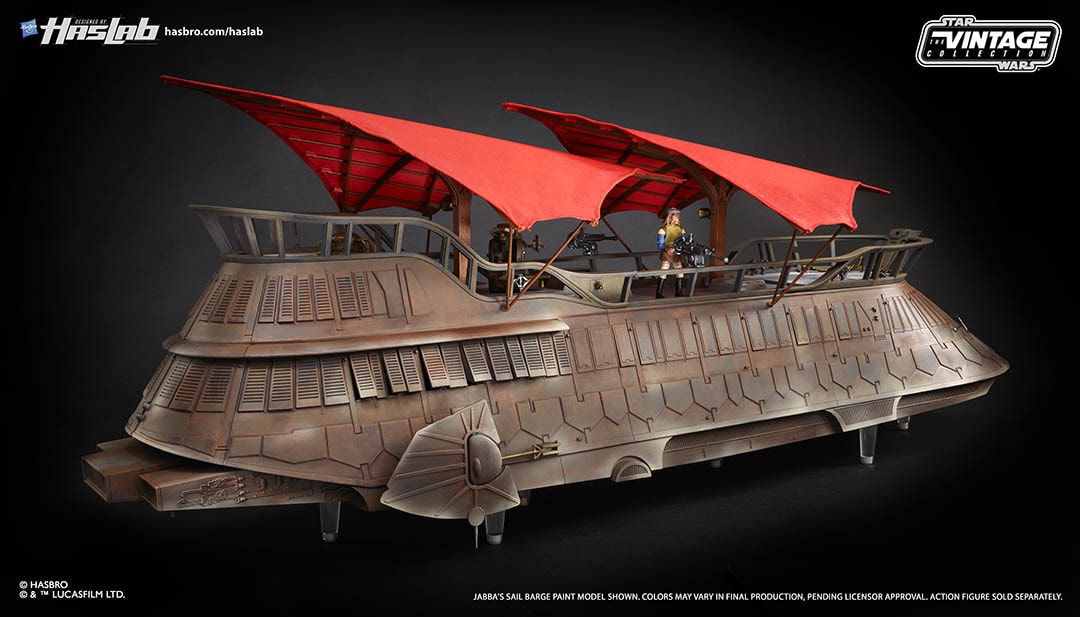 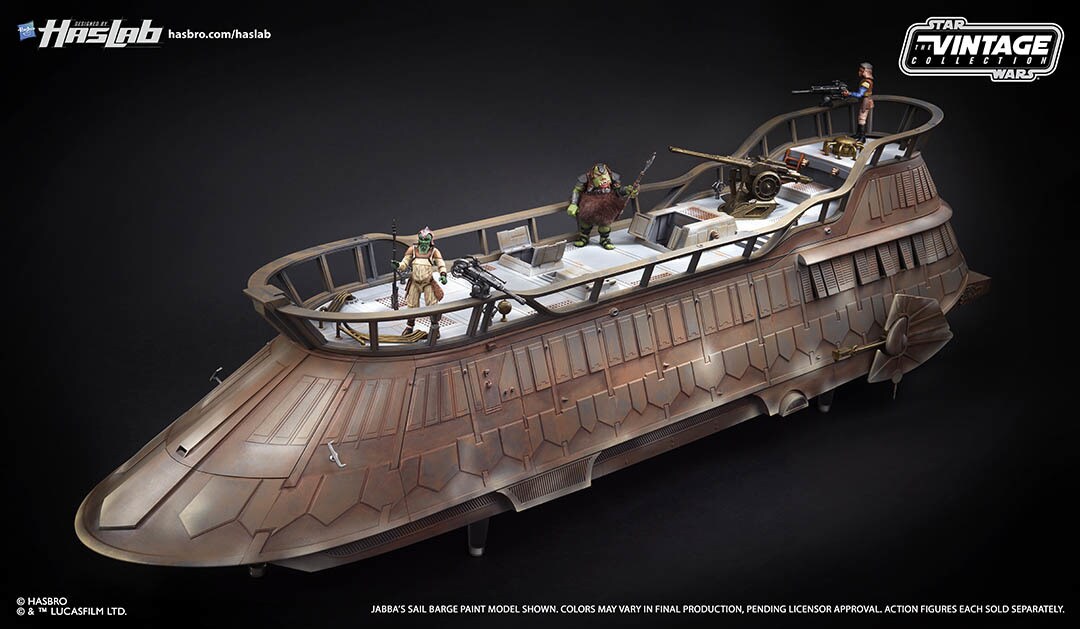 Look at the size of that thing!

Weighing in just shy of 14 pounds, and measuring at 49.35 inches long, 14.64 inches wide, and just over 17 inches from the base to the tips of the sails, the barge is an impressively massive piece of merchandise.

“The size of this thing is incredible,” Dern says. “From a manufacturing/tooling perspective, this is quite an undertaking. The tooling just to create something at this scale, with such an amazing level of detail, is a remarkable achievement." 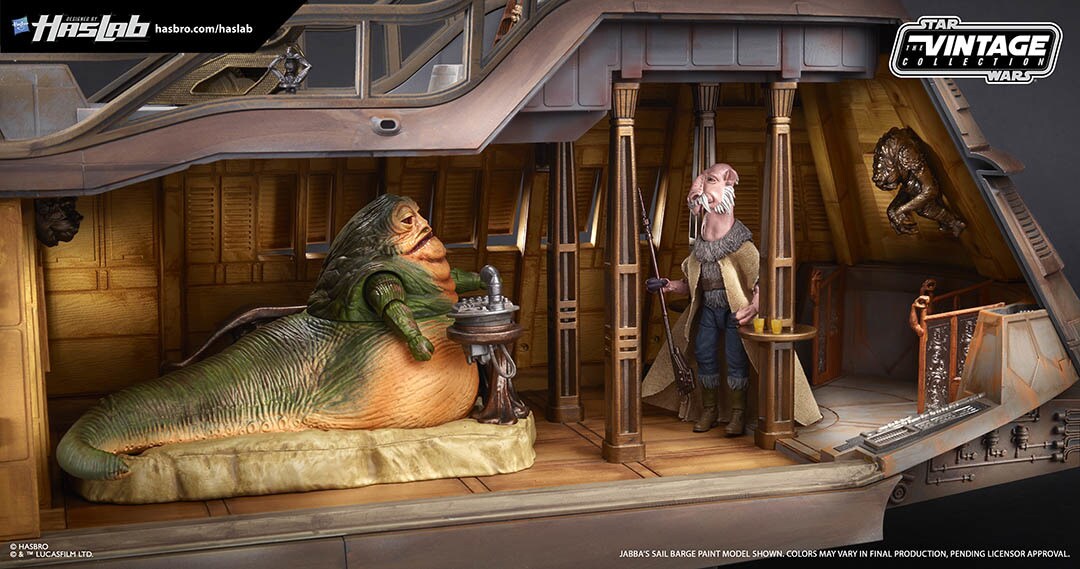 Designers captured ornate, cinematic details, like Jabba’s microphone, trophy heads, and other sculptures, then took it to a whole new level, imagining other necessities for a crime boss’s floating yacht. “The designers went into this really thinking of functionality and playability,” Dern says. “Our goal in our role here is, how accurate can we get? Whether it is scouring for an old set of blueprints, utilizing archived models, published materials, and/or entertainment footage, all of which helps guide us in our decision making and ultimately to the final result." 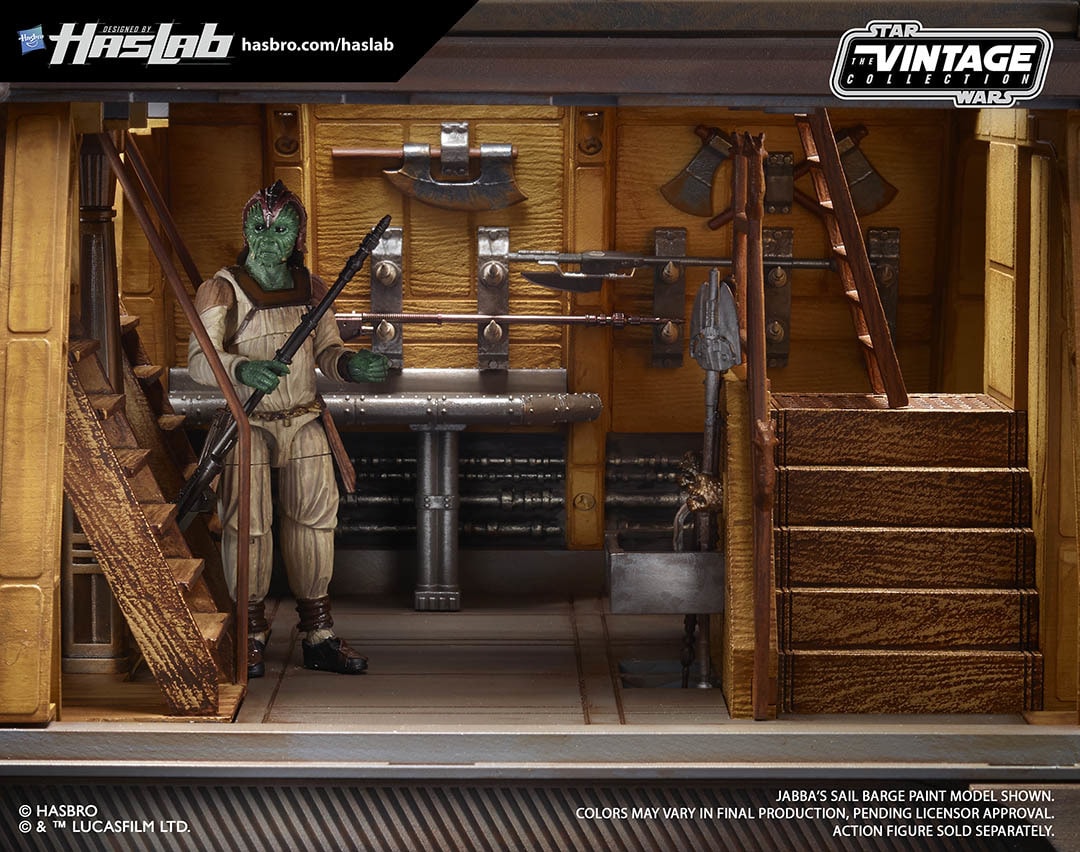 Designers surmised that Jabba would need a kitchen to keep the serving trays of pesky astromech droids and the bellies of the barge guests full, so they created a galley kitchen, complete with fresh-caught meats. Transporting prisoners required a jail, including one forgotten Ithorian, now little more than a pile of bones in a cell, and an armory.

Every detail was accounted for and made for active play, Dern says. The prison cell, for example, includes a tiny set of chains that can be used to secure an action figure of your choosing. And there are plenty of other trap doors, hidden compartments, and removable pieces.

“What I’ve always liked about any vehicle that Hasbro or Kenner has developed,” Dern says, “is the detail that they capture and then the functionality of it. What opens? What little trap door does it have? What little space can we capture to have secret hidden compartments? It makes the experience much more fun, compelling and allows everyone to immerse themselves deeper into the fantasy.” 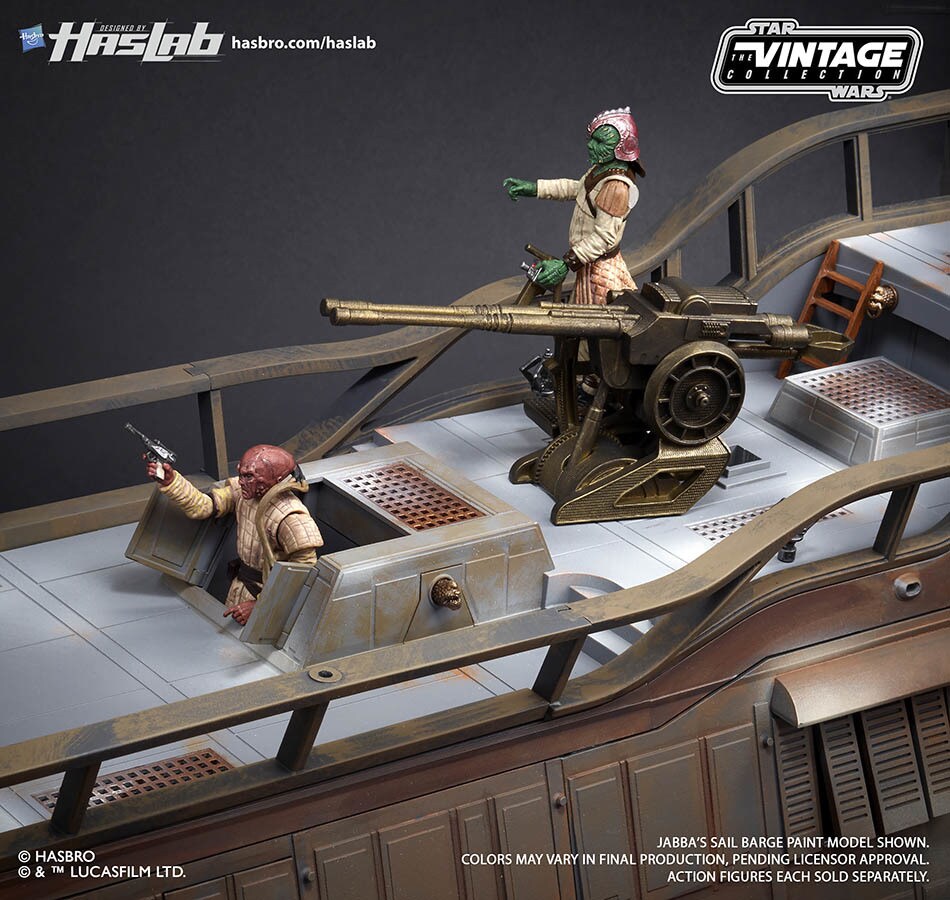 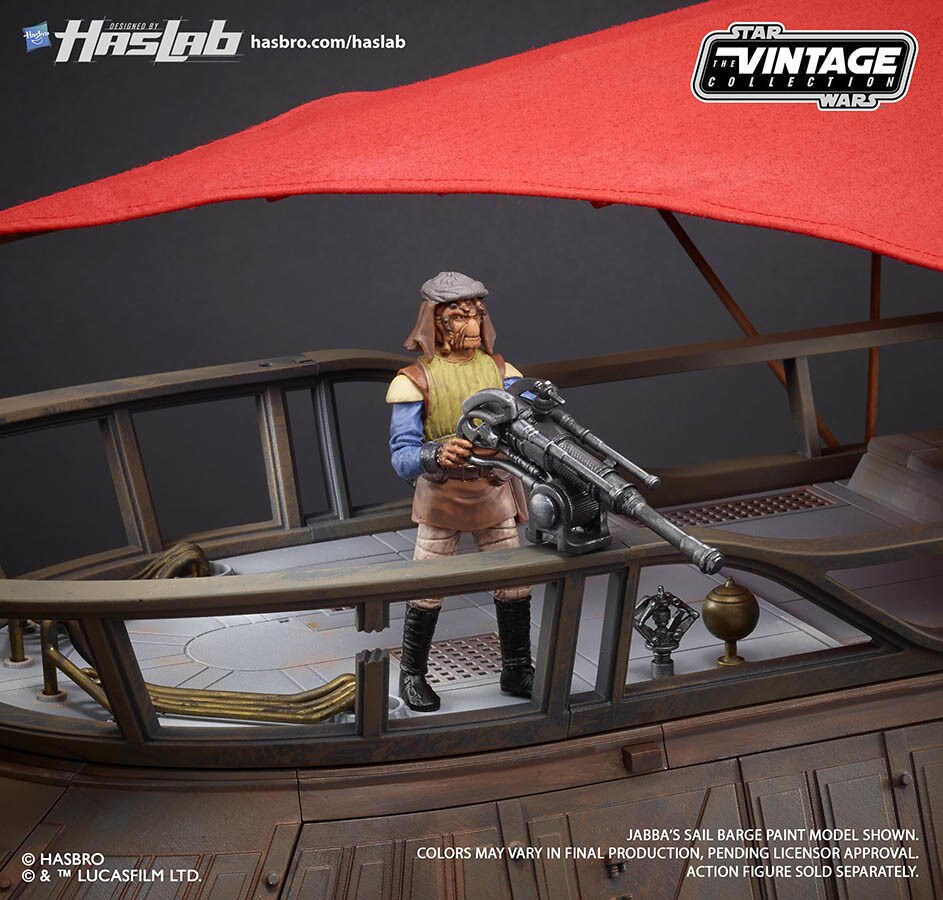 Each of the 250 individual parts were molded by factory machines, then pieced together by both machine and human hands, Dern notes. “All of these little, hinged shutters -- there’s quite a few on here -- somebody had to piece those together.”

To capture the weathered, used look that dominates the design aesthetic of nearly every ship in the Star Wars galaxy, the paint deco was painstakingly applied in layers, a mix of molding, airbrushing, and handpainting that makes each individual barge unique. “You can see the brush strokes,” Dern says, and every nick and ding. “Star Wars is full of that, right? George [Lucas] and all those designers did such a great job of making things look lived in and old and beaten up. It made it more real. So we take great care in trying to best match that.” 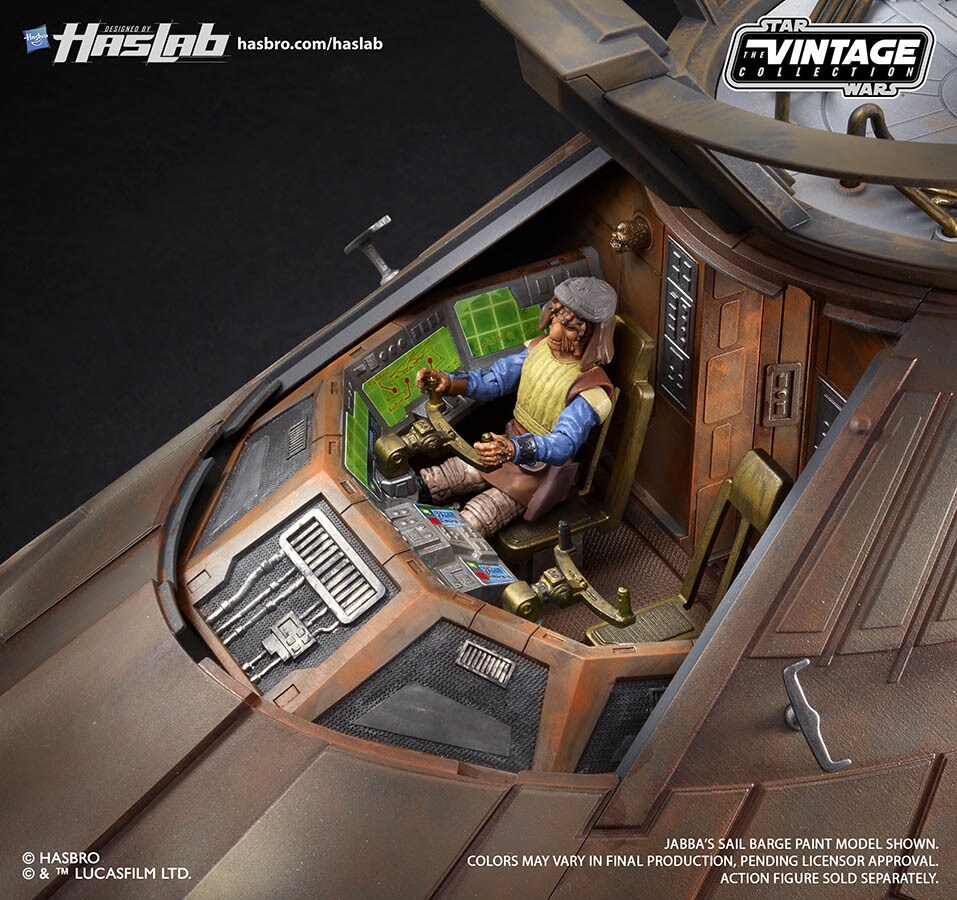 The team even flipped the vehicle over and decorated the underside, Dern notes. And textures incorporated into the plastic capture the roughness of the cockpit seating and the delicate appearance of frosted glass panes.

Along the way, HasLab has documented the creative process like never before, giving fans and backers a behind-the-scenes look at the making of the massive toy. “There’s a lot of behind-the-curtain here, which is kind of a first,” Dern says. “That’s a big deal and quite unique in this industry to share design, development and even manufacturing processes. We hope the fans truly appreciate the efforts the team put forth.”

For instance, to capture the glamorous vintage-inspired box art showing the barge in full-color glory, 14 Hasbro employees spent 120 hours on the photoshoot, which included bringing in 900 pounds of sand to recreate the Dune Sea and the creation of one custom, posable Sarlacc. 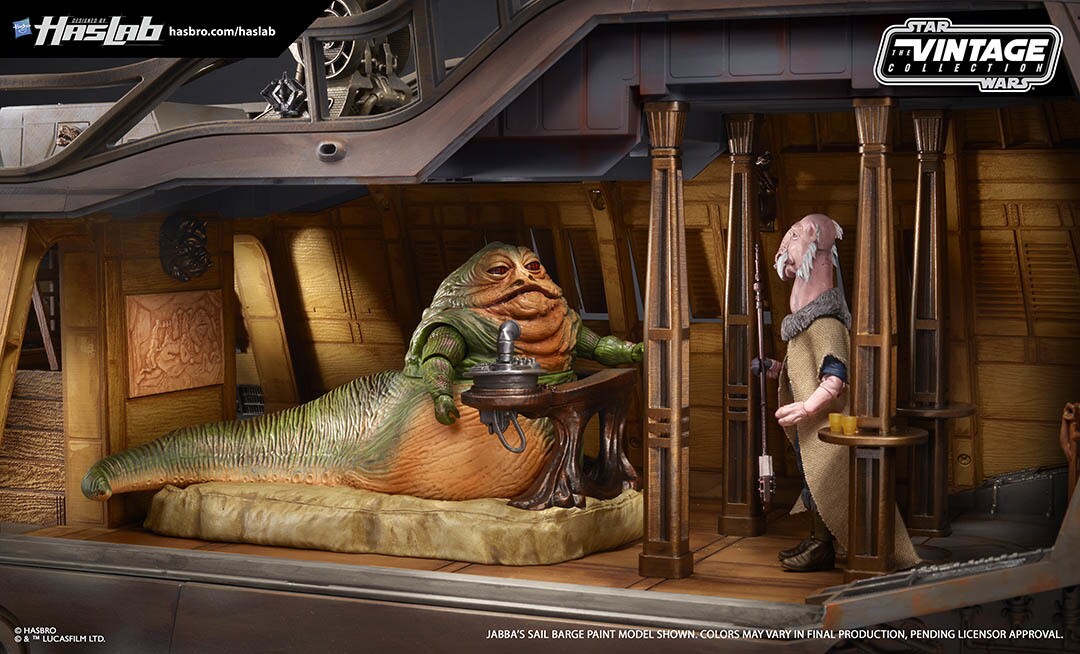 The ship is delivered with a 3.75-inch scale Jabba the Hutt, with detailed paint deco to match the grandeur of the Khetanna, and a special Vintage Collection Yakface figure. A carded version of the figure will be available for the mass-market release.

Dern, who had the privilege of being the first to receive a final production barge at his office in San Francisco (for final product review purposes) is excited for fans to finally get their hands on their own sail barges soon. But he’s hard pressed to identify his favorite aspect of the finished vehicle. “As a toy designer I appreciate this grand undertaking from a pure design, engineering and manufacturing toy perspective. The amount of deco and level of detail is absolutely incredible on this. It’s a bit of a showstopper. Wait until you see the size of the box this arrives in!”

With the sail barges now shipping, HasLab, the crowdfunding platform that helps put dream products in the hands of eager fans with their support and pledges, is expected to announce its next collectible soon. But Hasbro has plenty of other exciting new Star Wars toys heading to store shelves this year, including everything recently announced at Toy Fair in New York.