The creators behind IDW's Halloween-themed series of scary stories talk about their final terrifying trip to Vader's castle. 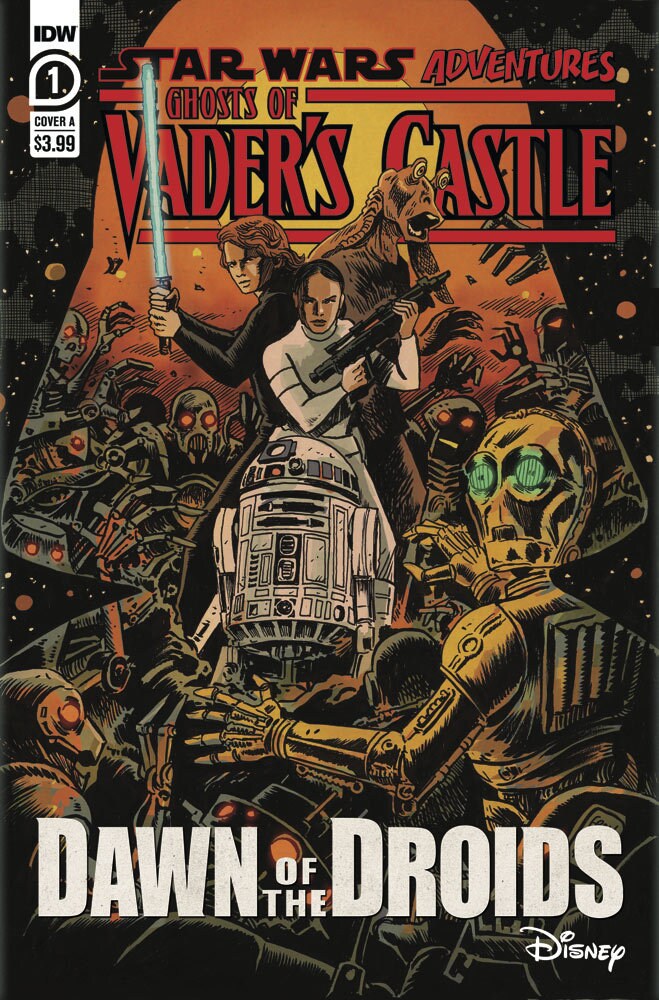 StarWars.com: If this is a fan’s first time venturing into Vader’s castle, what do they “need” to know before they read Ghosts of Vader’s Castle?

Cavan Scott: Each issue features a framing story that runs through the series, plus also scary stories told by the characters as they fight through whatever horrors they’re facing. In past series the stories told have been campfire tales shared by spacers in a galaxy far, far away. This time they are dreams and nightmares recounted by our heroes -- dreams and nightmares which seem to be coming true. 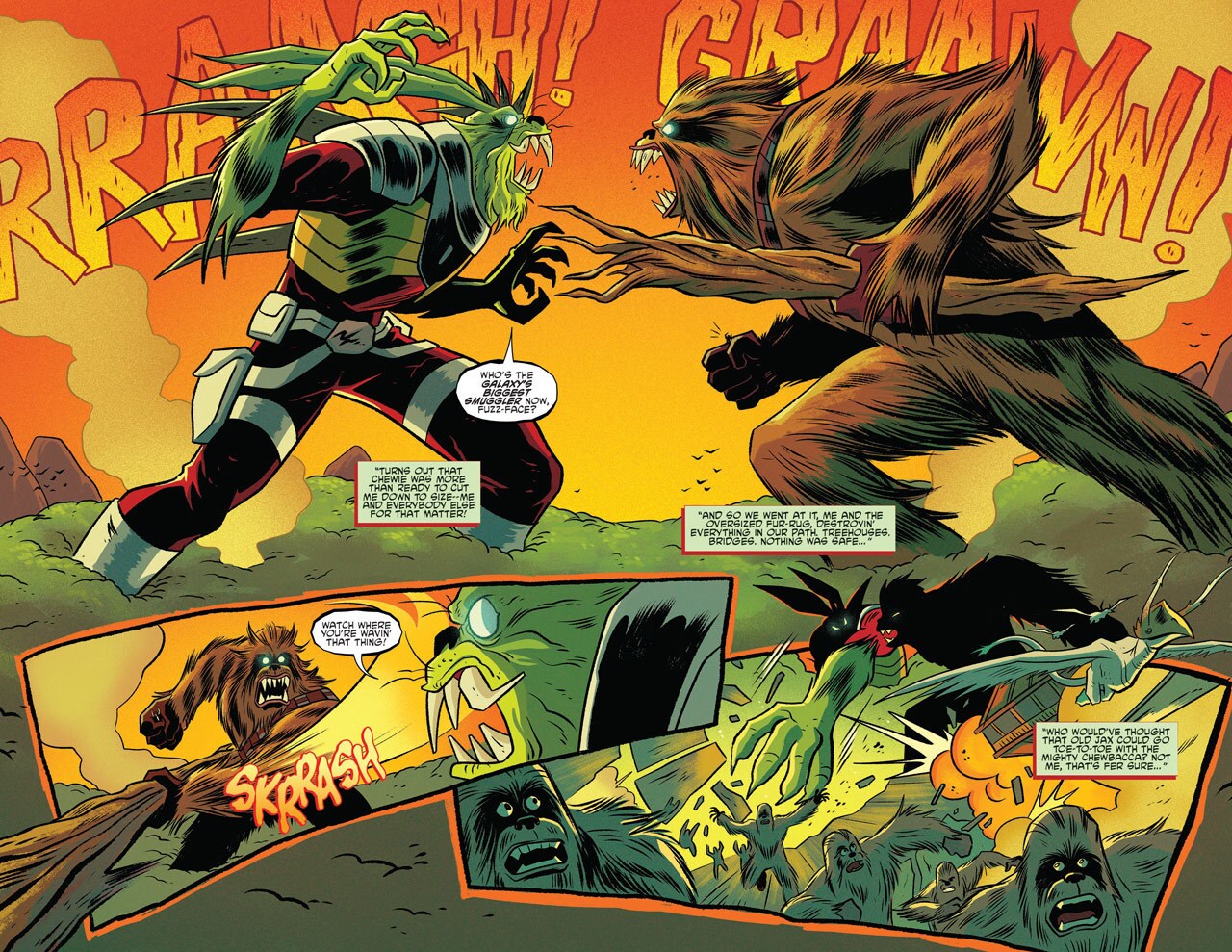 StarWars.com: Derek, the (fantastic) palette for Ghosts of Vader’s Castle #2 is dominated by orange and green; can you talk about the choice to use those colors?

Derek Charm: Thank you! I think color is a really great way to evoke atmosphere, and horror stories really lend themselves to non-literal, expressionistic colors. All of my previous Vader’s Castle stories had taken place in the actual castle on Mustafar, and I was using a really tight blue/red color palette there as a reference to Hammer horror movies, which were a major influence on our early stories.

With this one we’re on Kashyyyk during their harvest festival, so I wanted to keep the limited palette but change it up and use green and orange as the dominant colors to give it a more natural Halloween vibe and play up the folk-horror aspects Cavan was going for. 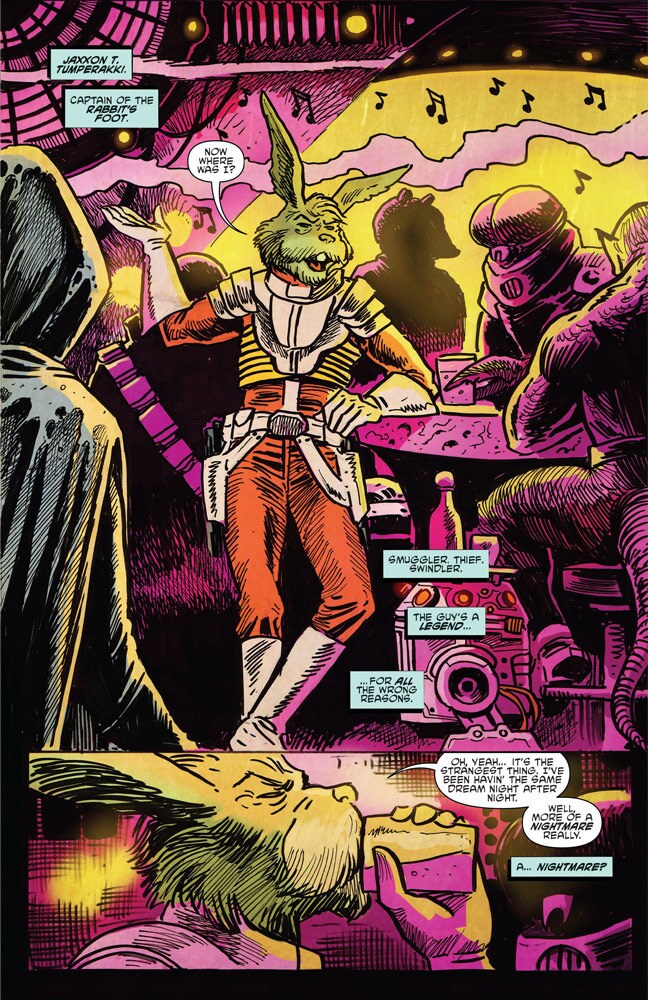 StarWars.com: Cavan, it’s no secret that you’re a fan of Jaxxon, and it’s great to see him in this series as well. What is it about the character that appeals to you?

Cavan Scott: My first ever Star Wars experience was picking up Star Wars Weekly issue 16 back in 1978, the Marvel UK weekly that reprinted the original Star Wars Marvel run of comics in glorious black and white. And there was Jaxxon on page one of the story standing alongside Han and Chewie. I must have read and re-read that issue hundreds of times and fell in love with the big green space bunny from the off. I remember being really disappointed he wasn’t in The Empire Strikes Back! 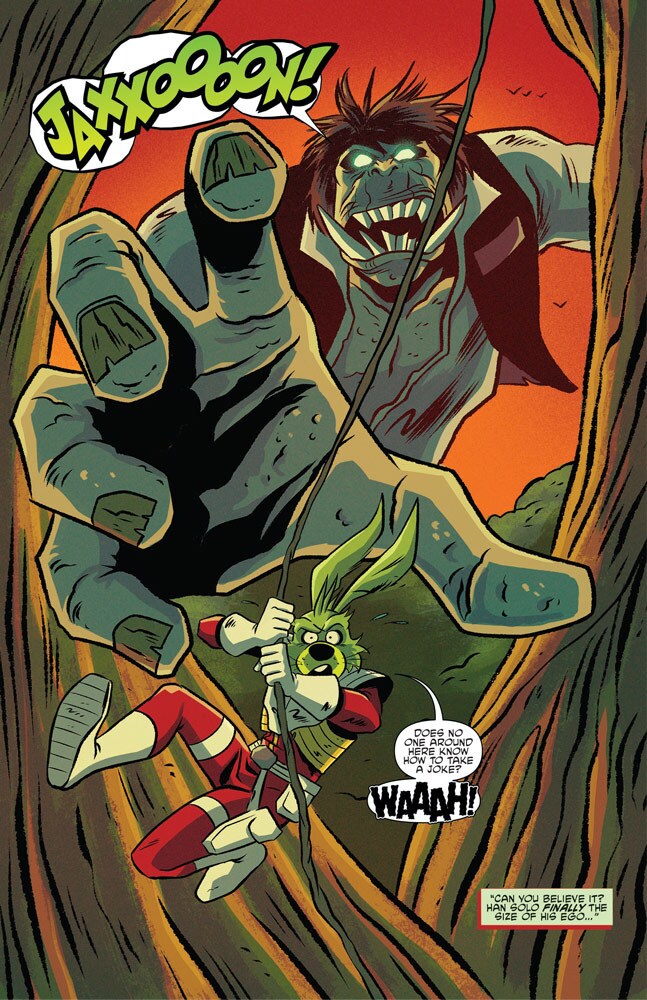 From a writing point of view, I love Jaxxon because he brings with him a natural dollop of comic relief, which is especially important in an all-age horror book like this. Plus, he’s a useful character to have around as he is constantly being underestimated by the villains of the piece (and quite a few of the heroes, too!). People look at him and write him off as a bit silly…usually before they received a swift kick to the head!

Jaxxon has nothing to lose and everything to prove, which is always a fun combination. When I realized that Lina and company needed a pilot this year, well, what other choice did I have…?

StarWars.com: Derek, without spoiling too much, what was your favorite thing to draw for issue #2?

Derek Charm: I loved doing the monstrous versions of some of the classic characters, but my favorite is the Wookiee Shaman that sort of sets the story in motion. Cavan asked for a unique look for him, and Lucasfilm suggested a wooden headdress of some kind. I really like how his look came together. 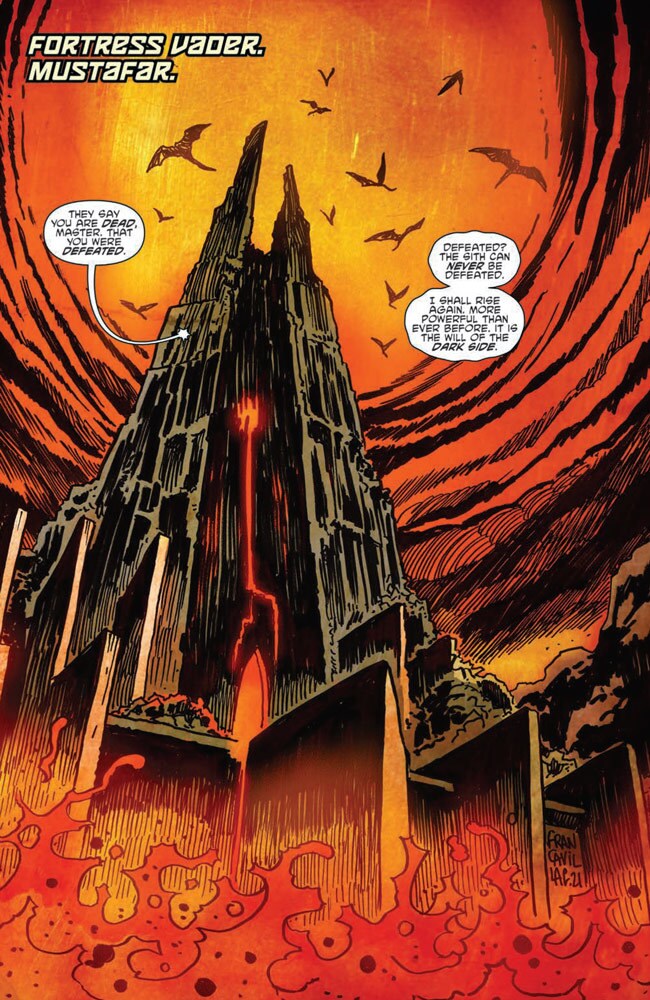 StarWars.com: What do you think is the scariest thing in Star Wars?

Cavan Scott: You mean other than Vader himself? Actually, most of the scariest moments come from the Dark Lord of the Sith. Leia’s interrogation in Episode IV. His saber snapping on in front of the younglings in Episode III. His approach down the corridor in Rogue One. Crispy Anakin by the lava flows of Mustafar. Each and every one of those moments could be in a horror film. 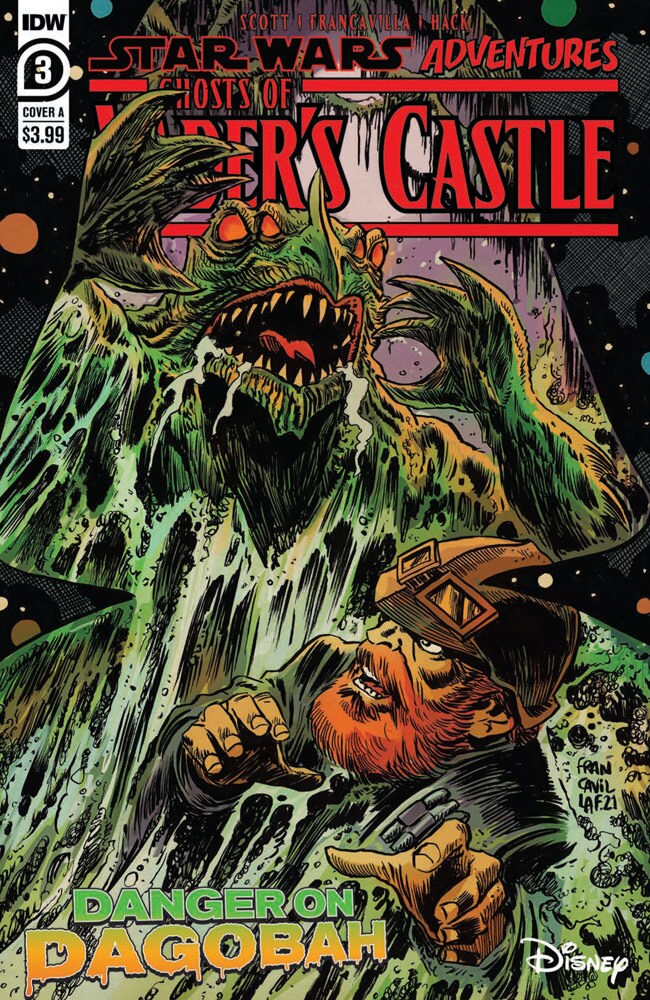 StarWars.com: The Vader's Castle comics finally brought Halloween storytelling to the Star Wars galaxy, which meant a lot to fans. As you close the series out, any reflections?

Derek Charm: I remember first hearing about this from Cavan at a comic con years ago and being so excited about the idea of telling a Star Wars story through this horror filter. Halloween is a holiday that brings so much atmosphere with it, it’s been really fun to get to apply that sensibility to Star Wars and see that it totally fits.

Cavan Scott: I still can’t believe the things they’ve let us do! Zombie droids? The Wicker Man with Ewoks? Turning Tarkin into Baron Frankenstein? Turning Dooku into Dracula? Every time I’ve suggested something thinking we’d never be allowed, Lucasfilm has given us a big thumbs up.

Star Wars and Halloween were born to be together. My biggest hope is that fans come back to these stories time and time again whenever scary season rolls around.

Find all of the horror hijinks at Vader’s Castle now on Comixology and at your local comic shop!

Kelly Knox writes features and DIYs for StarWars.com. Her work can also be seen on DC Comics, IGN, and more. Follow her on Twitter at @kelly_knox to talk Star Wars, bad dad jokes, and crafts.