The Spooky Secrets of IDW's Tales from Vader's Castle

From the cave on Dagobah in The Empire Strikes Back to visions of Sith spectres in The Clone Wars animated series, Star Wars has long been strong with the spooky side of the Force. That's never been more apparent, or more beautifully celebrated, than in IDW Publishing's current five-issue comic book miniseries Star Wars Adventures: Tales from Vader's Castle. The story follows a rebel crew that crash-lands on maybe the creepiest of all Star Wars locales: Mustafar, the lava planet that's also home to Darth Vader's towering castle on a (molten) hill. As the ragtag group tries to survive the world's harsh conditions and make their way into the imposing structure, they share scary stories from across the timeline of Star Wars. It's perfect for Halloween season, and something that fans of all ages can enjoy. Issue #3 arrives today, and StarWars.com is celebrating the comic series' midpoint in spooktacular fashion -- we've asked series writer Cavan Scott to take us inside Vader's Castle, as it were, showing us the process from script to finished page, complete with his own commentary and a first look at what horrors await in issues #4 and #5. Enjoy...if you dare! 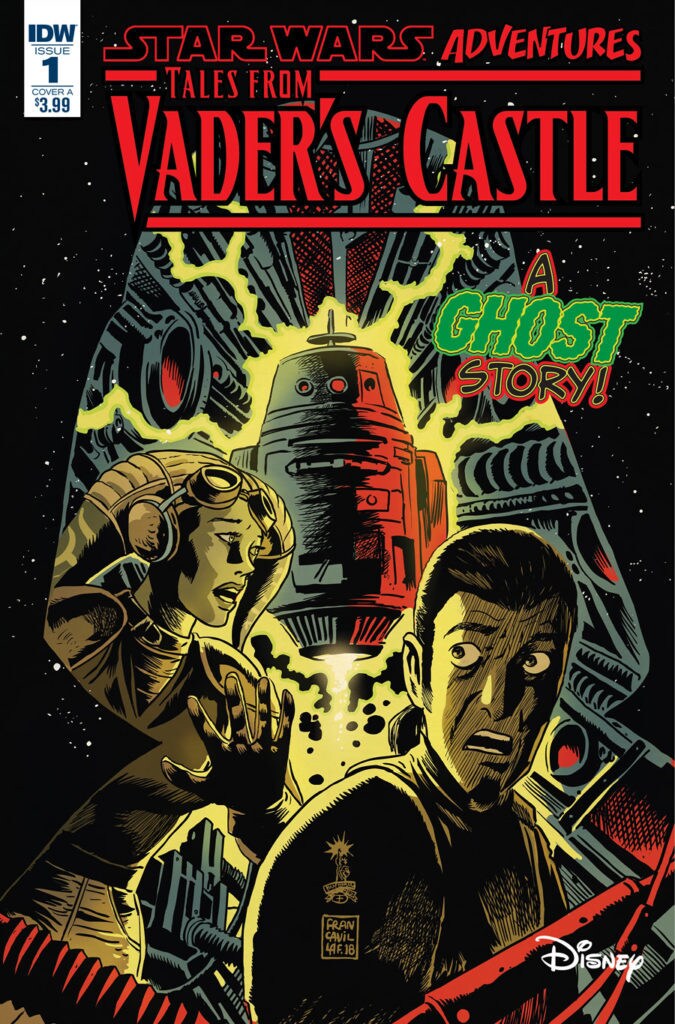 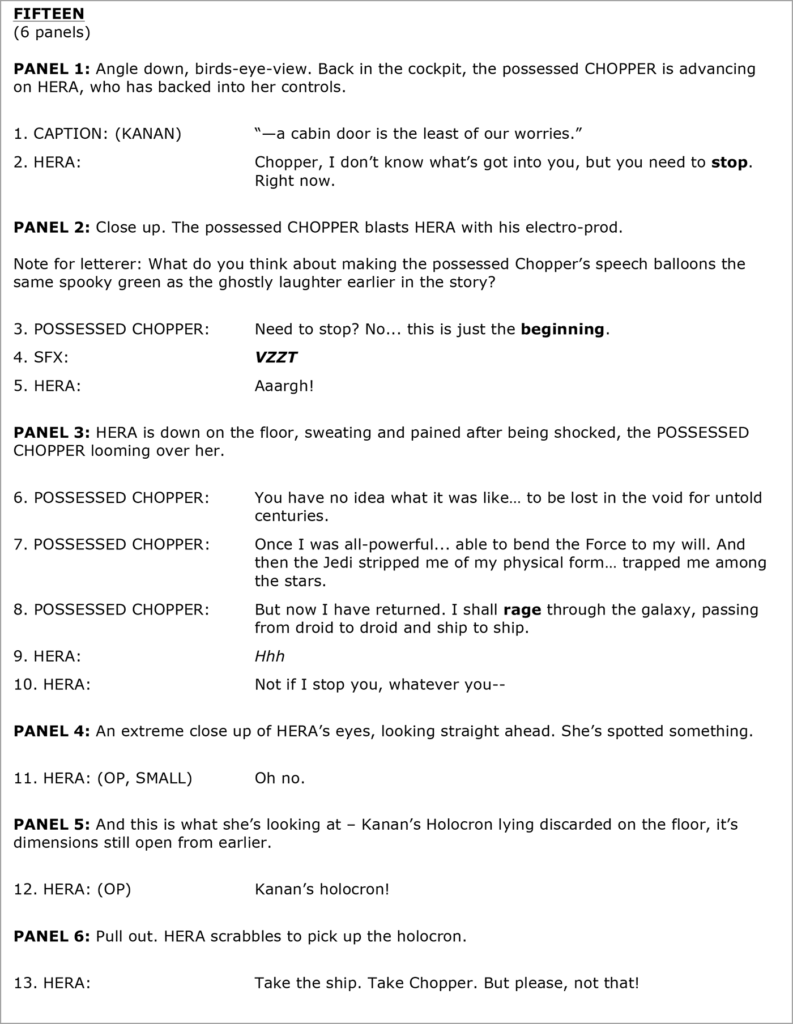 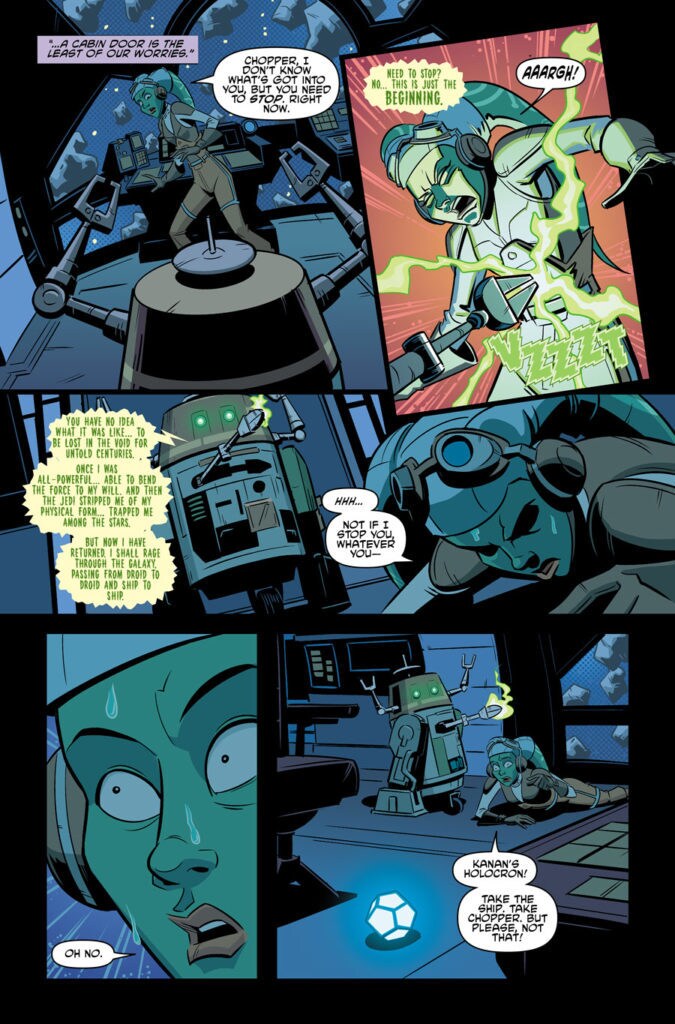 "Our guest artist for issue 1 was Chris Fenoglio, whose work I’d known from IDW’s Goosebumps comic, plus who had provided the colors for my Jaxxon story in this year’s Star Wars Adventures Annual. Here you can see the script for the page, which comes at a point when Chopper has been possessed by the disembodied spirit that is haunting the Ghost. I always make it clear to artists I’m working with that the scripts are a guide, not a rulebook, and as you can see, I originally planned this as six panels, but Chris quite rightly reduced it down to five so the panels would have more impact.

Before the script even reaches the artist, it is knocked back and forth between editors Denton Tipton and Elizabeth Brei at IDW and Lucasfilm editorial and the Story Group."

"The original plan was for each issue of Tales From Vader’s Castle to have an individual title that riffs off an iconic horror movie in some way. This one was originally titled "The Haunting of Hera Syndulla" but eventually became "The Haunting of the Ghost" as a tip of hat to The Haunting of Hill House.

The story sees Hera and Kanan rescuing a terrified rebel contact called Graysom. The bird-like alien is a Hoopaloo, a race I introduced in Choose Your Destiny: A Han and Chewie Adventure." 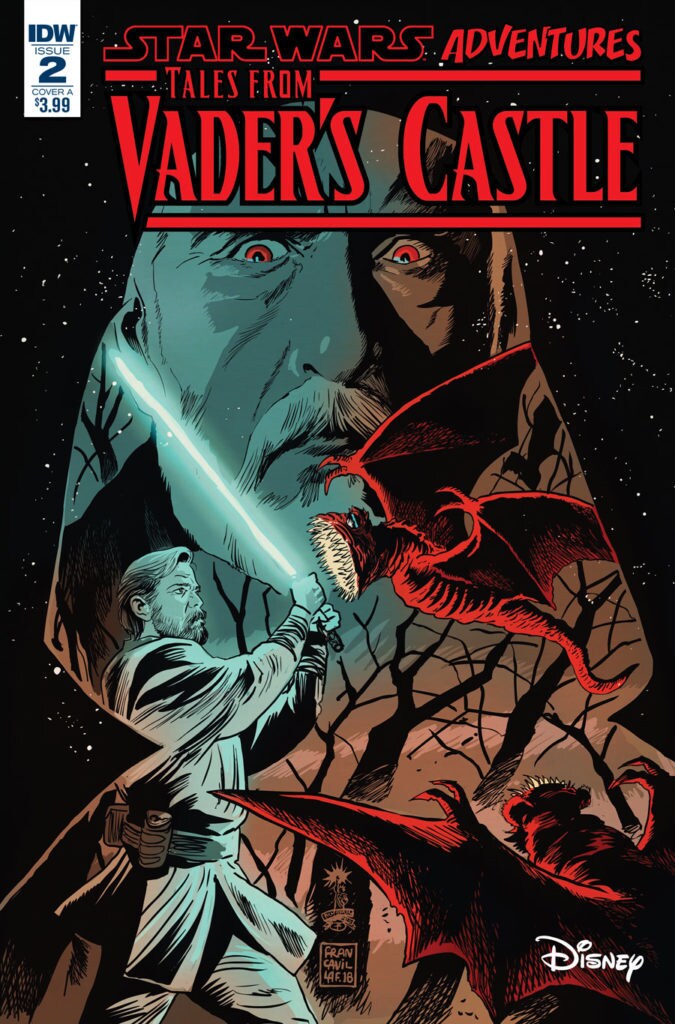 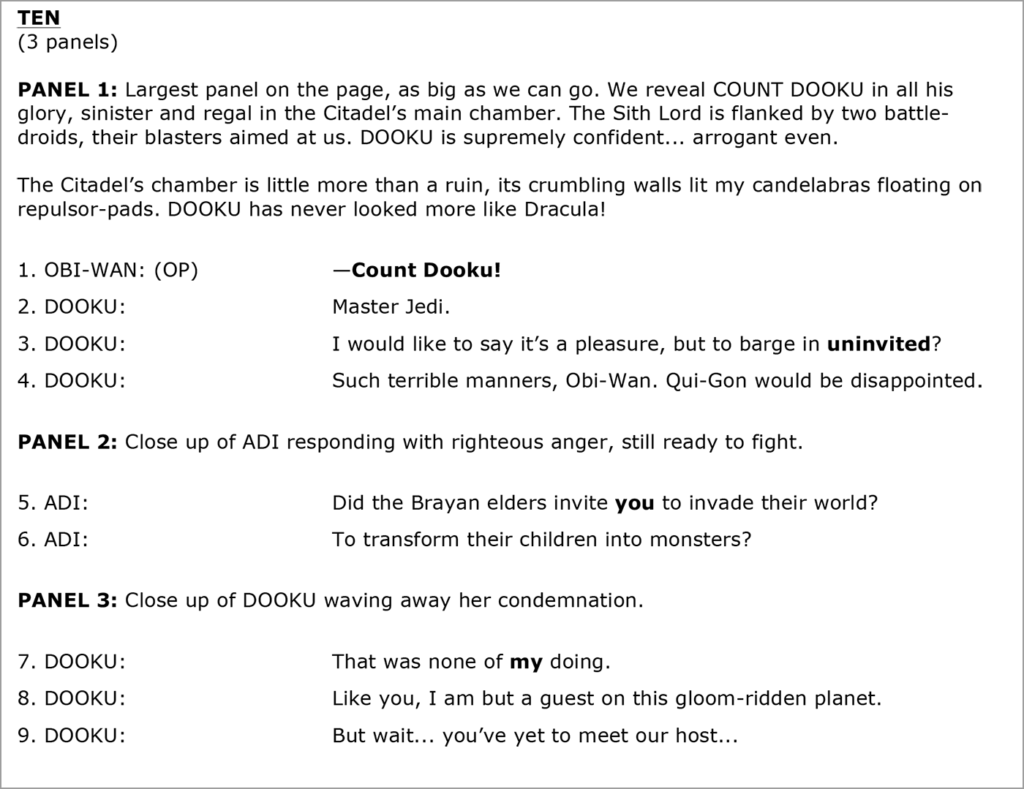 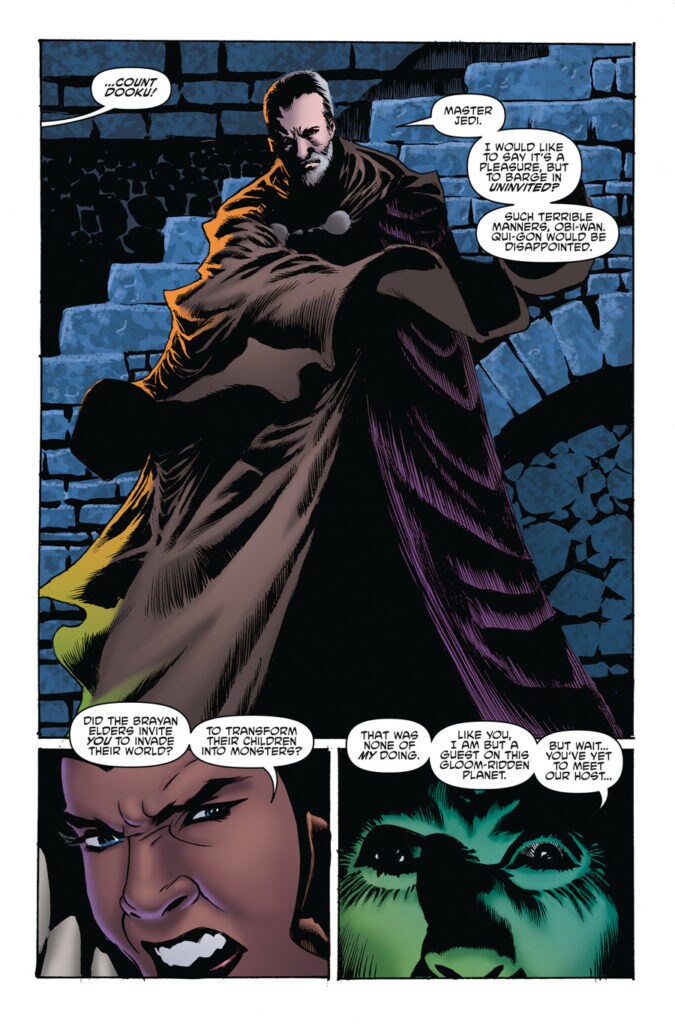 "I have always loved Kelley Jones’s Batman art, so when Mike [Siglain of Lucasfilm] told me that Kelley was providing the art for issue 2, I was over the moon. This is the issue that started it all. Mike and I are both big Hammer Horror fans and so he knew what he was doing when he suggested doing a Halloween special featuring Christopher Lee’s Star Wars character. Originally, we thought about riffing off Frankenstein, but looking back it always had to be Dracula. The script includes the description: 'DOOKU has never looked more like Dracula!’ to which Mike added a note ‘Go to town, Kel!’ That last panel is pure Hammer."

"The planet Bray is named after Bray Studios, Hammer’s legendary studios where many of its most famous horrors were filmed, including Dracula: Prince of Darkness." 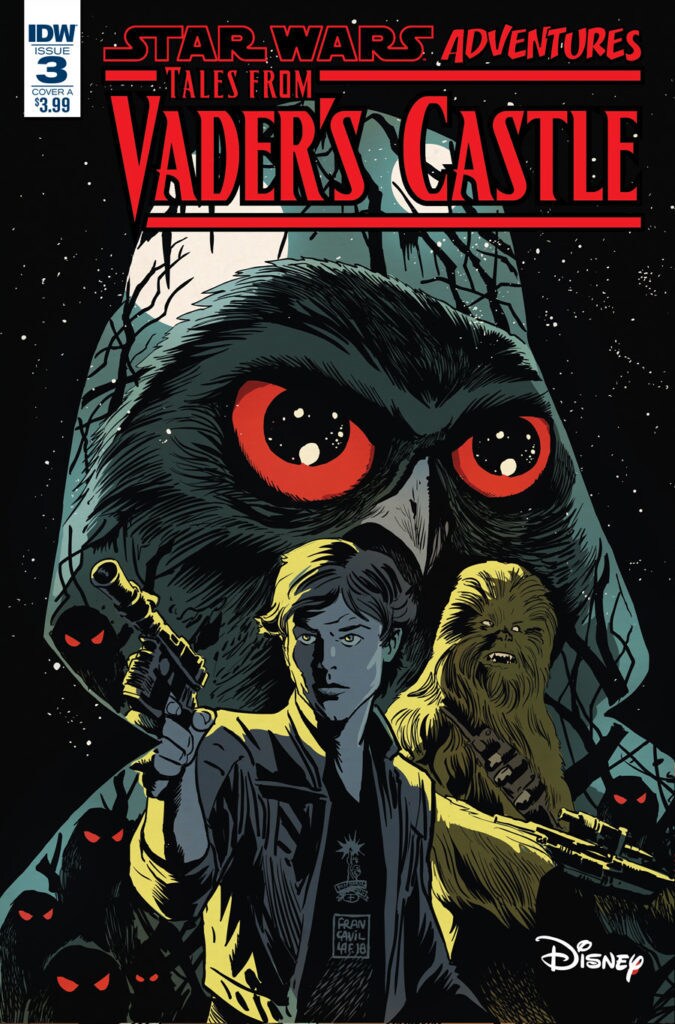 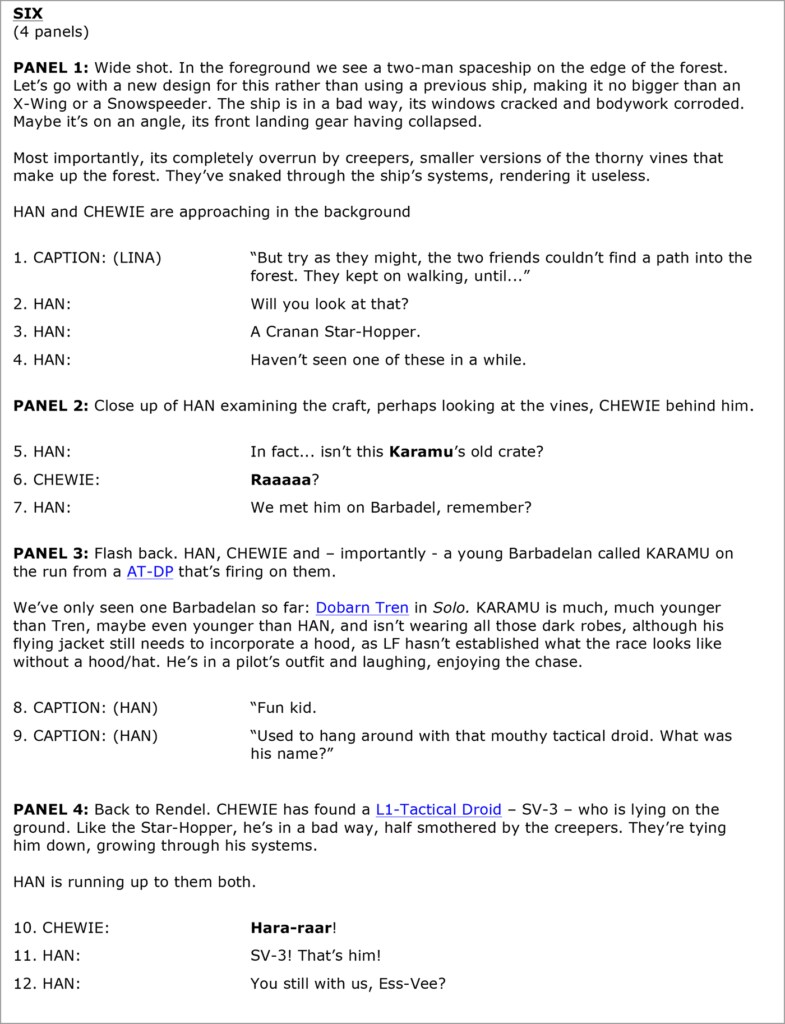 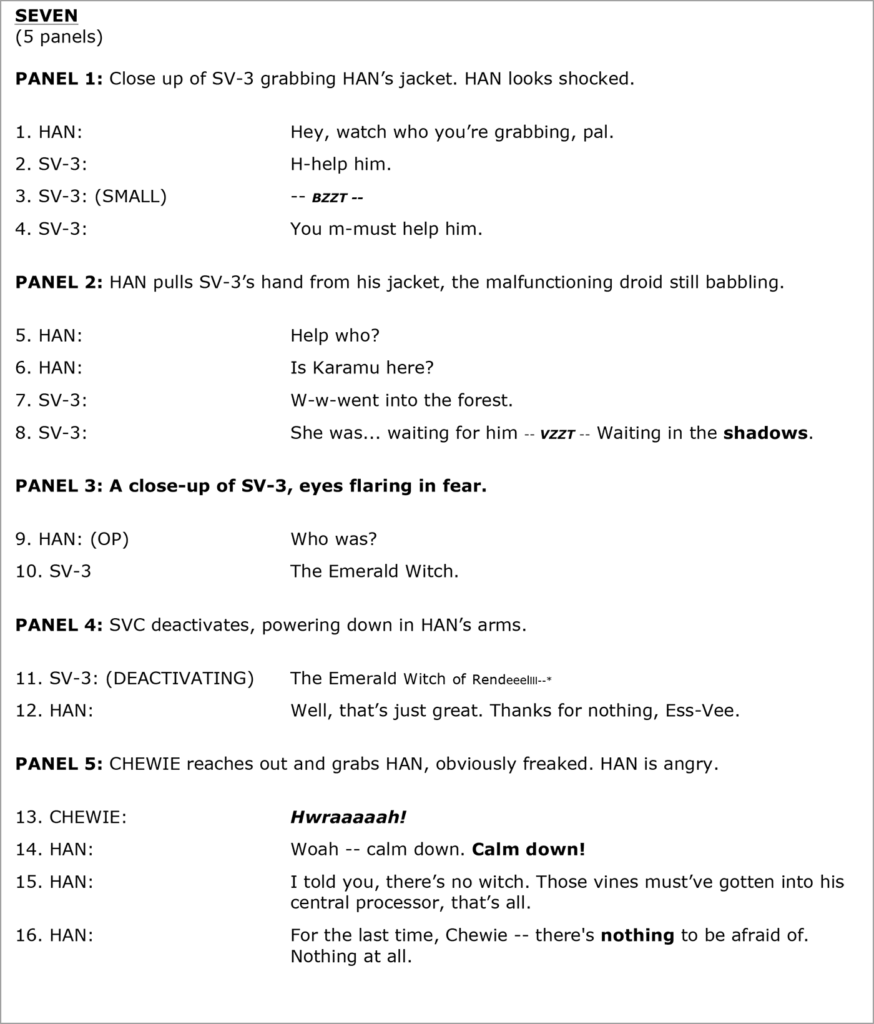 "Right from the start, I wanted a witch story in the miniseries, and originally thought of the Nightsisters, but of course the timelines didn’t quite match up when we decided to opt for Han and Chewie as our heroes -- with many of the Nightsisters having been wiped out years before. However, the tone of this story became very different when Corin Howell was attached to it. Looking at her work, I realized we could push the action into twisty fairy tale territory, and was more than a little influenced by Frozen, which always seemed to be playing on the telly when my daughters were growing up.

Now, I have to admit that I like including little Easter eggs or references to other parts of the Star Wars saga in my stories, and never expect the artists to be as geeky as me, so wherever possible I add hyperlinks in my scripts to references online. My thinking is that as I’m the one asking for a certain reference, it's only fair that I do the legwork in pointing them in the right direction. But again, I always make it clear that these are suggestions as nine times out of ten, the artists will have much better ideas.

Oh, and I love writing Chewie dialogue. I have an entire page in my notebook filled with the stuff depending on what he’s supposed to be saying."

"When I was working up the plot, the two sisters were originally named Ana and Helza revealing their Frozen influences, but had made a note to change these to something a little less obvious later down the line. However, the planet Rendel is an homage to the Kingdom of Arendelle in the Disney movie." 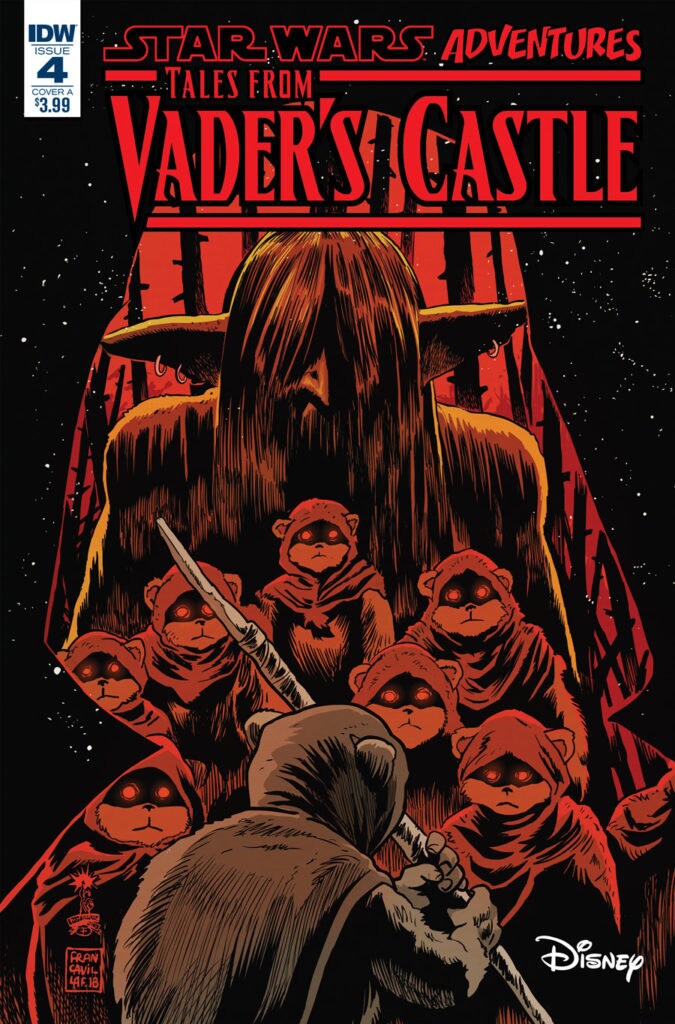 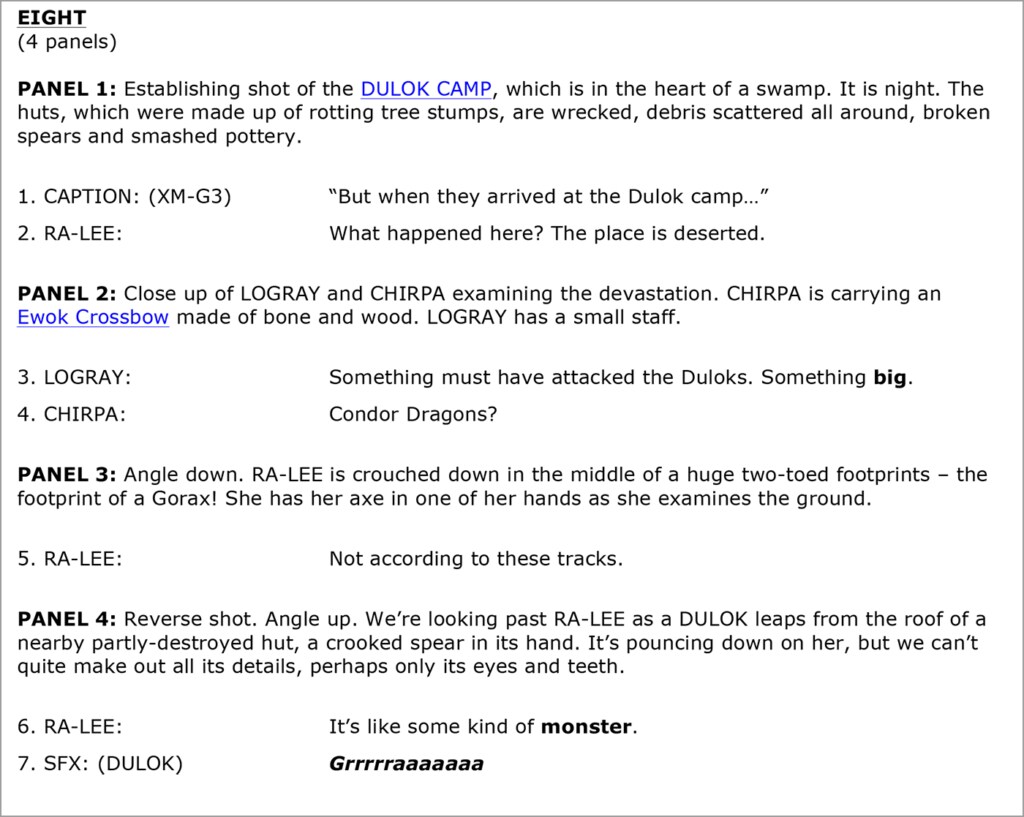 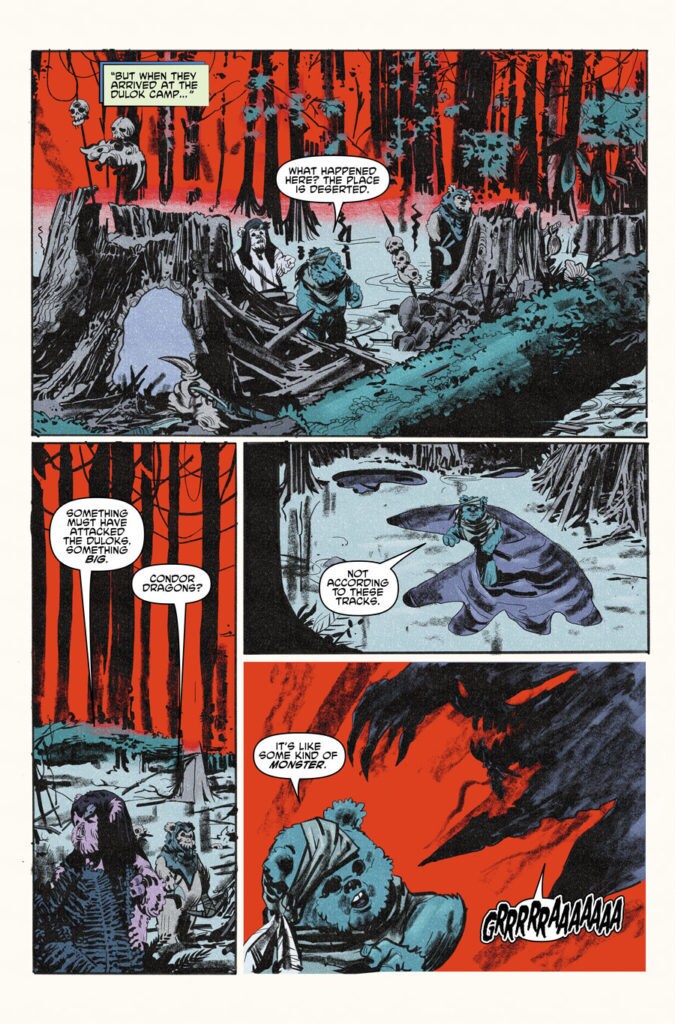 "I was determined to get Ewoks into this miniseries, although I think there was some concern that they would appear too cutesy. As soon as I heard that Robert Hack [illustrator of classic Archie horror comics] would be our guest artist, I knew that there was no need to worry. One thing I did highlight earlier in the script was that these Ewoks would ideally look as near as possible to the murderous little critters in Return of the Jedi, complete with their black eyes rather than more cartoon-like eyes as seen in the '80s cartoon or Caravan of Courage. Although you’ll find plenty of little references to Caravan in our story!

The idea for the striking color design came from colorist Charlie Kirchoff who, inspired by Robert’s inks, created three color schemes that would be used throughout the issue, each using a limited palette. This is what I love best about creating comics. The script is only the starting point, with each member of the team bringing something new to the process. This issue looks fantastic."

"Originally when we planned this series, it was going to take place much later in the Star Wars timeline, so the Ewoks featured were going to be Wicket and Teebo. When we finally settled on a pre-Rogue One placement for the framing story, Wicket became a no-no. I was really pleased when Lucasfilm went for my suggestion of making this an adventure for Chirpa and Logray before they became Chief and Shaman, respectively. And yes, that is Ra-Lee, Chirpa’s future wife. As I said, I like Easter eggs." 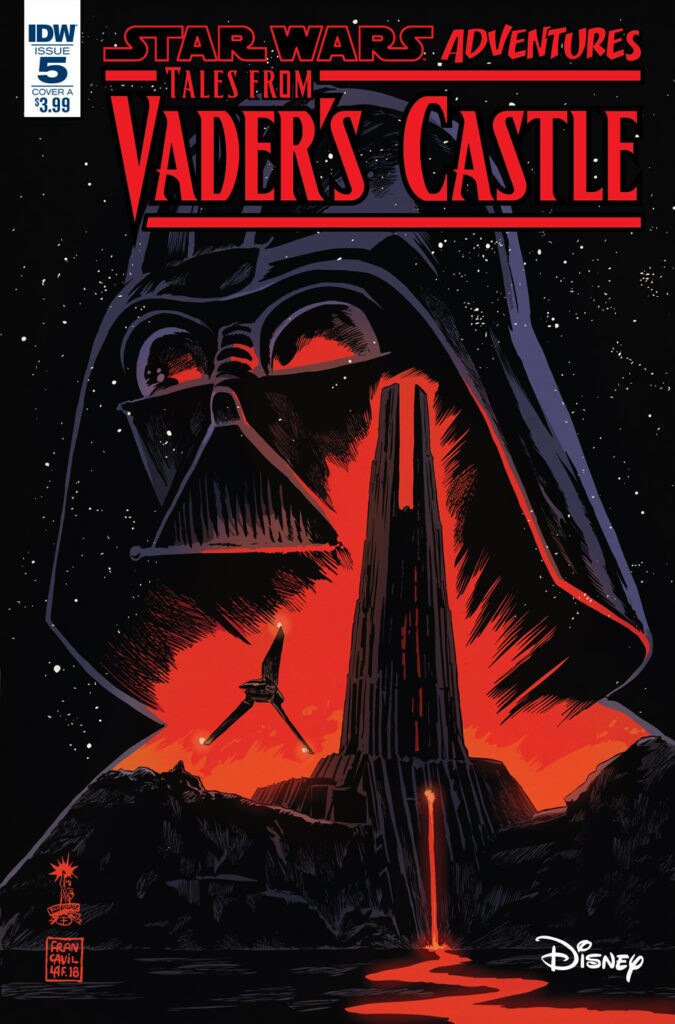 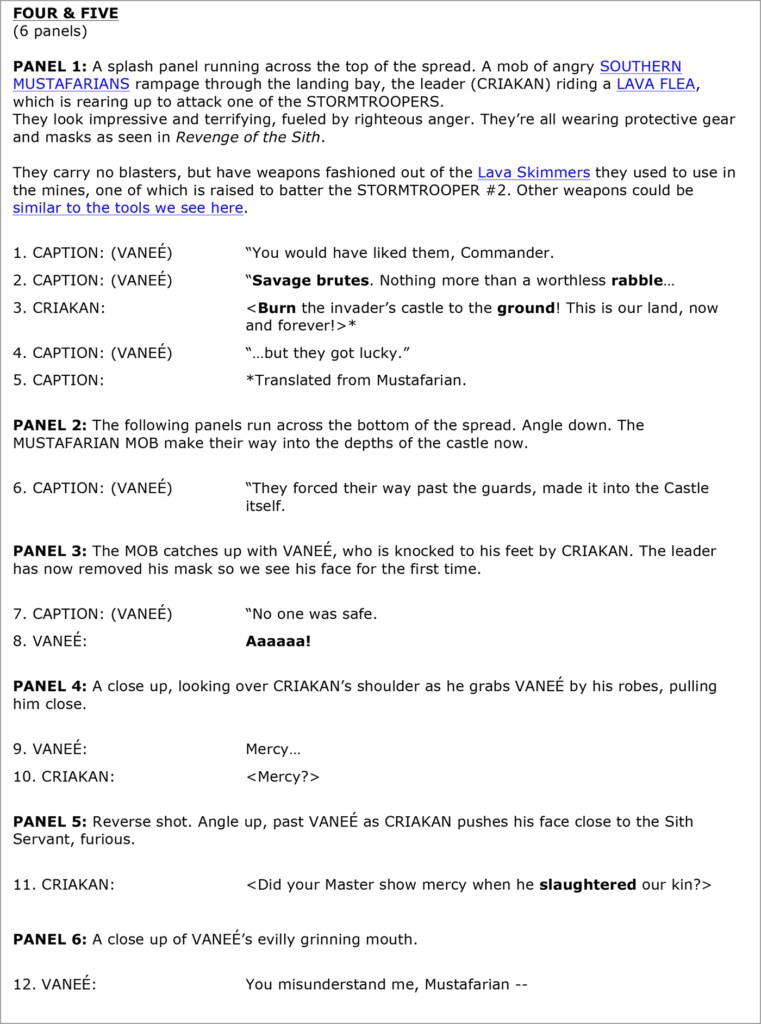 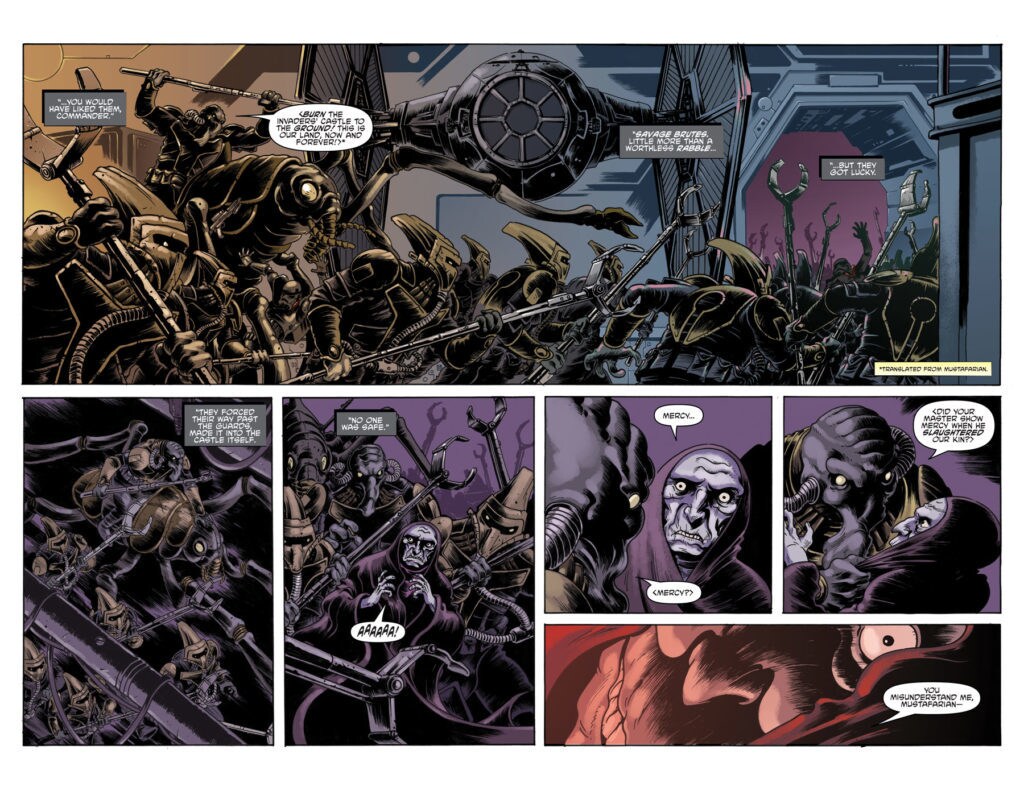 "Originally, this issue wasn’t going to have a 'tale-within-a-tale,' but I’m glad we included a short story in the midst of all the Darth Vader action, if only because it meant I got to work with Charles Paul Wilson III. I love his work on this spread. Charles’s pencils were a thing of beauty when they started coming in, his thumbnails insanely detailed. We had a few discussions about what a southern Mustafarian looked like beneath their helmets, even coming up with a little backstory about Criakan, who we see unmasked on this spread. Charles and I decided that he was the son of a love tryst between a southern Mustafarian and a northern Mustafarian, a pair of lava-struck lovers, so to speak."

"The idea of a Mustafarian raid on the castle came quite late in the day. Originally, the story-in-story tale in this issue was to be a thief that broke into Vader’s fortress to steal treasures, a plot-point which was actually moved to Hudd, one of the characters in the framing story.
For a long time this issue was called 'The Revenge of Darth Vader.'"

"I couldn’t write notes on this miniseries without mentioning the amazing Derek Charm, who provides art for the framing story throughout, including the Dark Lord of the Sith-centric action of issue five. Derek developed a new coloring style influenced by Mustafar’s lava-strewn landscape for the miniseries that was perfectly in tune with a Halloween special. Here’s a spread from issue 2. I remember there was quite a lot of discussion about which Mustafarian beastie to use in this sequence. Lava fleas were suggested, but I pushed quite heavily for Kubaza beetles, as first seen in Star Wars Galaxies, as I thought they would be more monstrous. (Plus, I loved the grossness of exploding bugs and screaming larvae!) The fleas do pop up later in the miniseries, though."