Meet some of the bravest soldiers of the Republic!

Star Wars: The Clone Wars breathed life into the Grand Army of the Republic. We met the clones who were grown and developed through an accelerated aging process on Kamino in Attack of the Clones and saw them go to battle with the Jedi. The clones didn't make up a mindless force like the Separatist's battle droids though. They had heart. The clones all possessed the same genetic coding, but each one was unique. That combination gave the army strength. A kind of strength the Separatists couldn't duplicate with their metal soldiers.

After Order 66, the clones perished and were eventually replaced by stormtroopers that the Empire recruited from around the galaxy. But before Sheev Palpatine's Order 66 programming kicked in, the clone troopers stood by the Jedi and became their friends. They were brave and selfless, especially so when you consider they didn't really have a choice about heading into battle. To honor their service, let's look back at some of the clone troopers we got to know in The Clone Wars.

Rex
When people think of clone troopers, Captain Rex often comes to mind first. He often served alongside Anakin Skywalker and Ahsoka Tano. He was often on the front line in battle and though he was loyal to the Jedi commanders, the men under his command came first. He was a first class leader and teacher.

Memorable quote: "I used to believe that being a good soldier meant doing everything they told you. That's how they engineered us. But we're not droids. We're not programmed. You have to learn to make your own decisions." 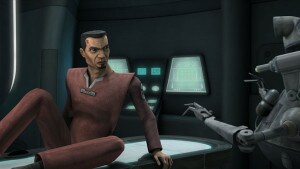 Fives
Fives was seen throughout The Clone Wars. We watched him develop from a rookie clone trooper to a member of the 501st Legion to an ARC trooper. He was involved in several key battles and never let down his friends. Fives was incredibly determined and bravely investigated the incident with Tup and discovered the truth about Palpatine and Order 66.

Memorable quote: "No clone uses their number. I am Fives. Call me Fives."

Echo
Echo often fought side by side with Fives and also rose through the ranks to become an ARC trooper. He was a by-the-books sort of clone who followed the training he received at Kamino to the letter. He was believed to be killed during a mission to rescue Jedi Master Even Piell, but Dave Filoni confirmed Echo survived.

Memorable quote: "Personally, I like that it's so quiet out here. I can catch up on the reg manuals."

99
Though 99 never left Kamino and technically wasn't a clone trooper, he was one of the most resolute and selfless clones. He was malformed, but he didn't let his limited physical abilities get him down. Clone 99 took pride in everything he did and instead of being bitter about the challenges he faced, he was kind and always ready to offer an encouraging word to cadets.

Memorable quote: "I'm a soldier, like you! This is what I was bred for."

Dogma
Dogma was first and foremost a soldier. The relatively young clone was all about bowing to authority, and while listening to your commanding officer can be a positive thing, doing so without question isn't. He was so obedient to the twisted Jedi Pong Krell that he sided with Krell over the rest of the 501st Legion. He did end up seeing the truth, eventually, and killed Krell.

Tup
Tup was also a newer clone but wasn't as naive as Dogma. He was among the first to question Krell's plans and was ultimately faithful to his commanding clone officer instead of the Jedi General. He even managed to lure Krell into a trap. Tup was sadly affected by a malfunction in Palpatine's programming and executed a Jedi long before Order 66.

Memorable quote: "Hey, ugly! Come and get me!"

Wolffe
Clone Commander Wolffe is the very definition of seasoned veteran. Leader of the Wolfpack squad, Wolffe often served with Jedi General Plo Koon. He suffered the loss of his squadron and friends and later, his right eye. Despite all hard hits that Wolffe took -- figuratively and literally -- he continued to fight and lead.

Memorable quote: "I don't believe in chance, Commander. I know if we work together, we will stay alive, and someone will find us."

Hevy
Hevy received his nickname because he was a heavy weapons expert. He was hotheaded and impatient but showed his true mettle in acts of kindness. In a gentle moment, he gave Clone 99 his graduation medal. And he sacrificed himself in order to destroy the listening post at Rishi Station to protect the Republic.

Memorable quote: "The remote isn't working; I have to detonate it manually."

If you could hand out medals to clone troopers to recognize their service, who would you give them to? For the sake of this exercise, let's pretend Order 66 hasn't happened yet.