This Besalisk Jedi is all about getting results and, indeed, his battlefield record lists many key victories in the Clone Wars. He has an unshakable confidence in his methods, and he will brook no insubordination among his charges. In personal combat, he can be ferocious -- his giant arms carry two double-ended lightsabers, making him extremely dangerous in close quarters. Pong Krell's reputation as a successful general is well known but so is the fact that the casualty rates of the clone troopers under his command are the highest. With two of his men facing execution for disobeying orders, Captain Rex must confront his overly aggressive commander, General Krell. 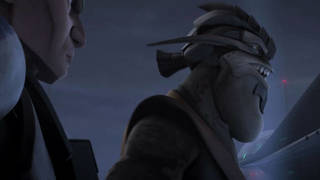 With the Umbaran airbase conquered, General Krell orders the 501st to march against the capital.