What is the Darksaber?

The legendary blade has been wielded by heroes and villains alike.

Spoiler warning: This article contains spoilers for the first season of The Mandalorian, as well as Star Wars: The Clone Wars and Star Wars Rebels.

Few weapons have as long and storied a history as the Darksaber of Mandalore. Star Wars fans first set eyes on the extraordinary black-bladed lightsaber in the animated series Star Wars: The Clone Wars, and it has since played a vital role in Star Wars Rebels -- and made a surprise return in The Mandalorian.

Why was the reappearance of the legendary weapon such a huge moment in the Disney+ series? Let’s take a look at the history of the Darksaber, from the warriors who wielded it during the long history of Mandalore to what it means to see it again in the galaxy after the events of the Galactic Civil War.

The Darksaber was created for The Clone Wars with the guidance of George Lucas, Dave Filoni has revealed, who conceptualized a weapon that would be effective against a lightsaber. “George wrote that little speech [about the Darksaber] for Pre Vizsla,” Filoni recalled in a Star Wars Rebels behind-the-scenes featurette. “What I added to that was this idea that the Darksaber was Mandalorian-made. That it was something that the Mandalorians felt was part of their heritage would make it way more valuable.” 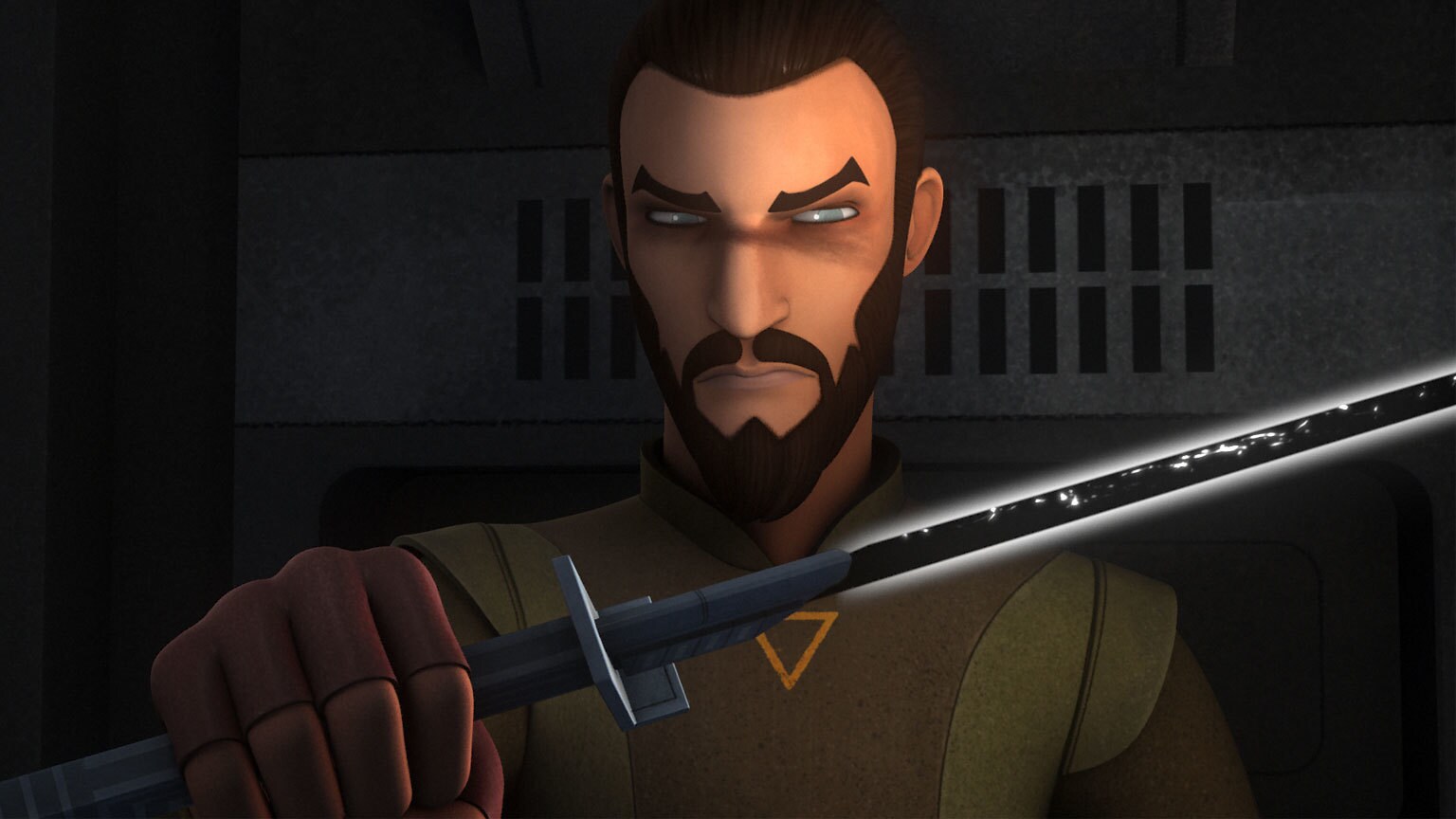 Before the Dark Times

The Darksaber goes back to the time of Tarre Vizsla, the first Mandalorian to become a Jedi Knight. He created a one-of-a-kind lightsaber with a flat blade of dark, swirling energy. In the Star Wars Rebels episode “Trials of the Darksaber,” Fenn Rau shared more of the Mandalorian folklore surrounding the weapon.

“Legend tells that it was created over 1,000 years ago by Tarre Vizsla, the first Mandalorian ever inducted into the Jedi Order,” Rau told Kanan Jarrus. “After his passing, the Jedi kept the saber in their temple. That was, until members of House Vizsla snuck in and liberated it.” 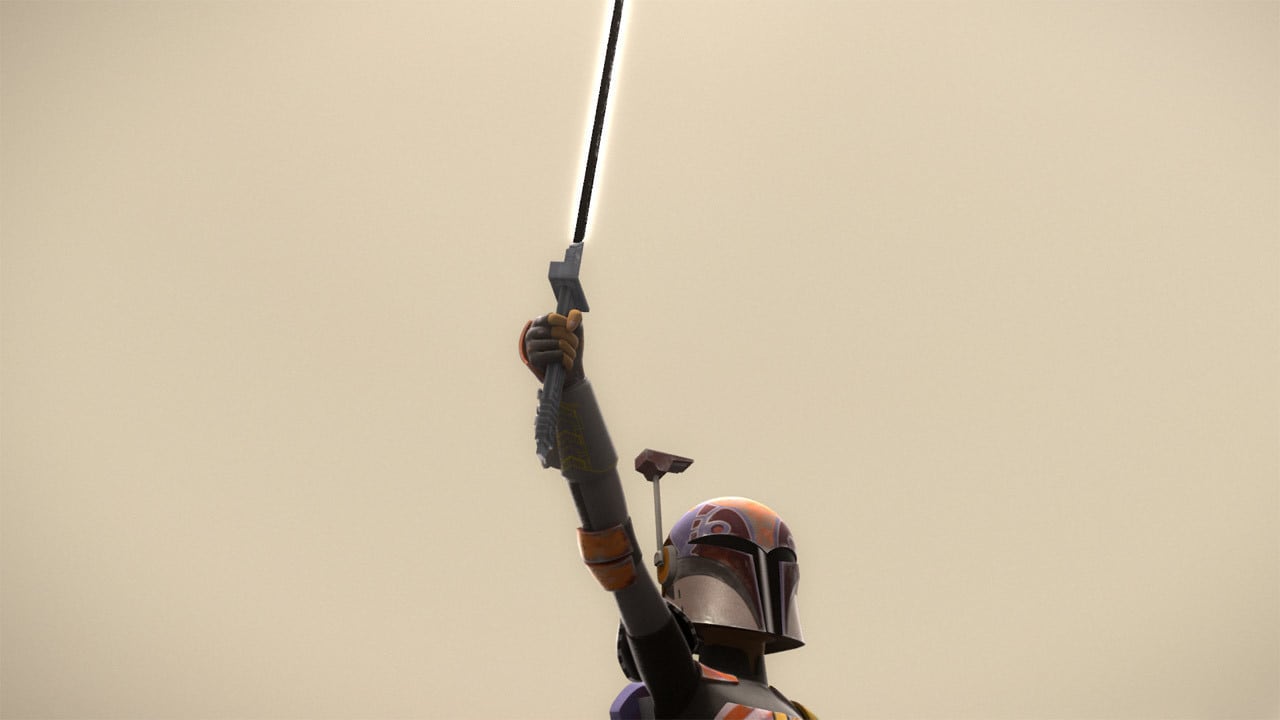 While not much is known about Tarre Vizsla, we do know he is a revered figure on Mandalore who later became one of its rulers. His legacy was so well-respected that the Darksaber became a symbol of power the Mandalorians rallied behind as they supported the leader wielding it.

“[House Vizsla] used the saber to unify the people and strike down those that would oppose them. At one time, they ruled all of Mandalore wielding this blade,” said Rau.

The blade remained with House Vizsla until the tumultuous days of the Clone Wars. Pre Vizsla, who rebelled against Duchess Satine’s  pacifist rule of Mandalore, brandished the blade against both Obi-Wan Kenobi and Maul in his efforts to return the planet to its warrior roots.

“This lightsaber was stolen from your Jedi temple by my ancestors during the fall of the Old Republic,” he told Obi-Wan with a sneer. “Since then many Jedi have died upon its blade.”

In the Clone Wars episode “Shades of Reason,” Pre Vizsla met his end with the blade in the hands of Maul. “I claim this sword and my rightful place as leader,” Maul declared.

The former Sith used the Darksaber for his own dark  purposes, including killing one of the people who meant the most to Obi-Wan Kenobi. Maul also wielded it against his former master when Darth Sidious traveled to Mandalore to quash him as a potential rival to his power, and later crossed blades with General Grievous and Mace Windu in the comic series Darth Maul - Son of Dathomir. 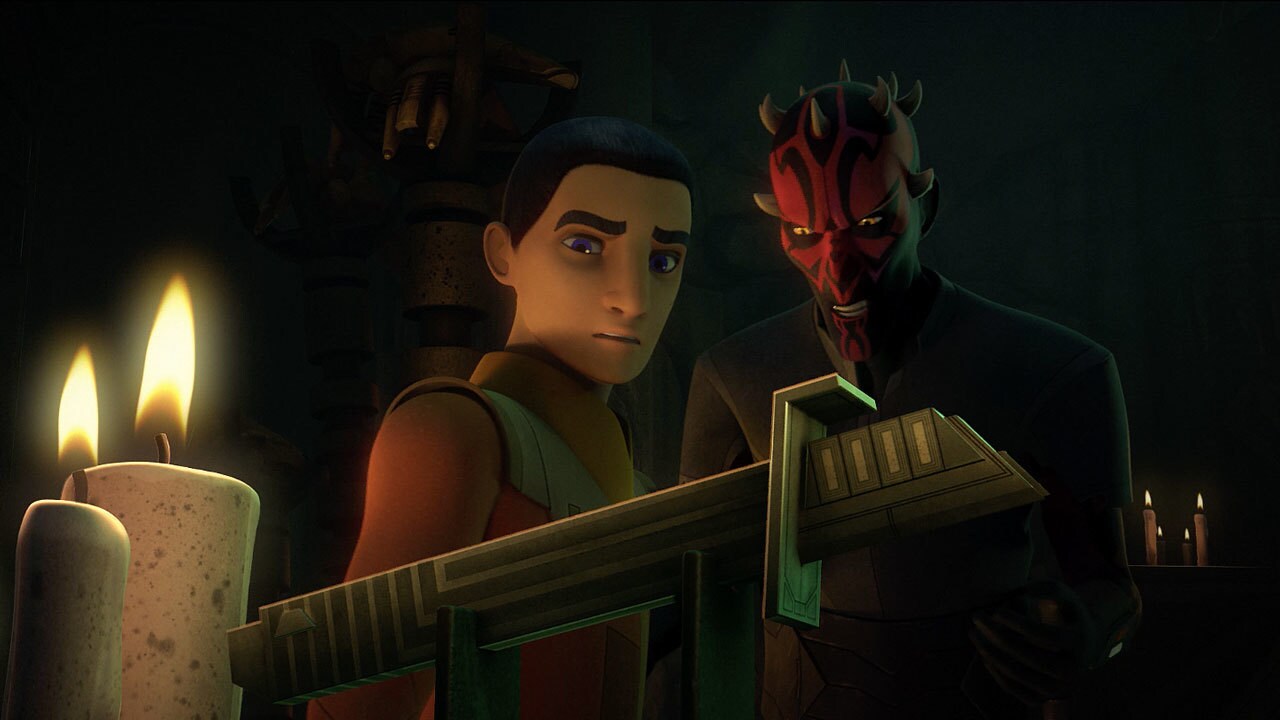 Maul eventually crossed paths with the crew of the Ghost in Star Wars Rebels years later on the planet Malachor. Ezra Bridger found himself linked to Maul after the two discovered they each held secrets the other desired. When Maul took Ezra to Dathomir to retrieve those buried memories, Ezra discovered the Darksaber among Maul’s possessions.

Ezra picked up the blade to defend himself, Kanan Jarrus, and Sabine Wren from vengeful spirits of the Nightsisters. Before leaving Dathomir, Sabine paused to pick it up, and later gave it to Kanan for safekeeping. 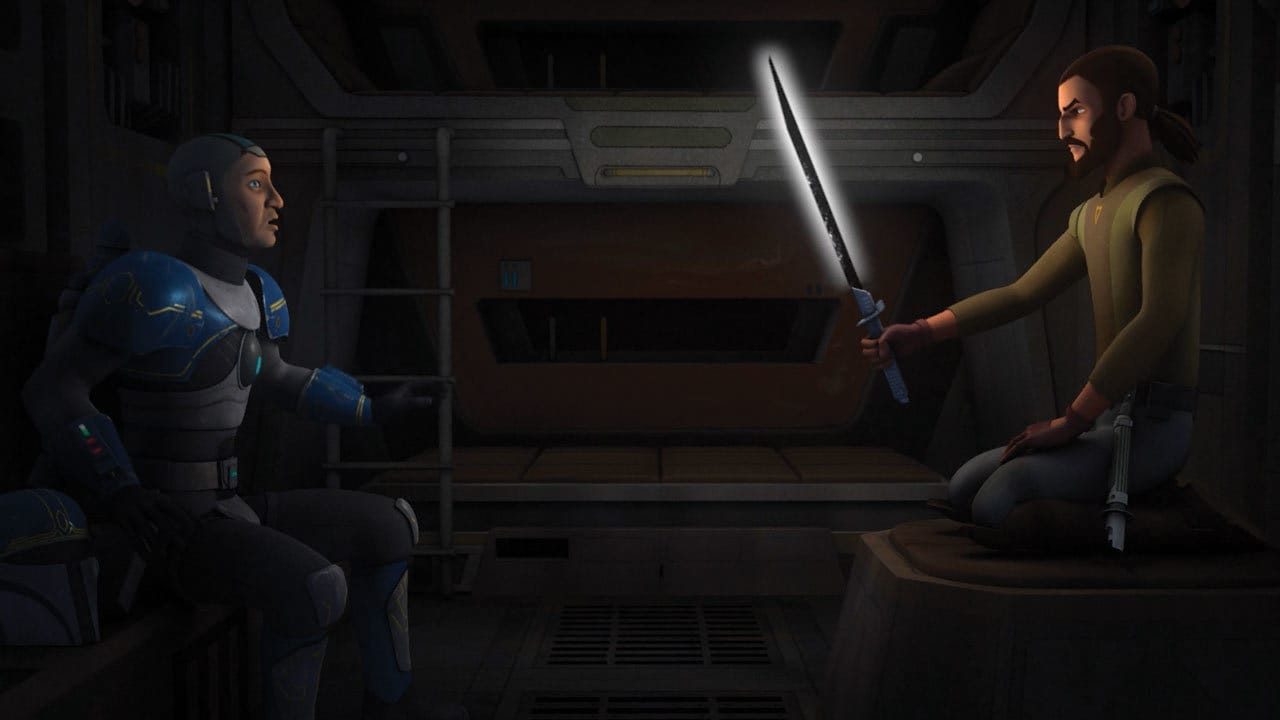 Kanan showed it to the Mandalorian warrior Fenn Rau in “Trials of the Darksaber,” who shared the artifact’s history. “This saber is an important symbol to [House Vizsla] and respected by the other clans,” said Rau. “If Sabine can wield this saber, she can reunite one of the most powerful houses in all of Mandalore.”

Sabine was a member of Clan Wren, part of House Vizsla, granting her a claim to the Darksaber. Although she was initially reluctant to take on the responsibility, Sabine accepted training from Kanan and Ezra, and the truths she learned about herself gave her the confidence to fully accept the weight of carrying the Darksaber.

“That sword is old, heavy, but powerful,” Kanan told Sabine. “Respect its strength.” 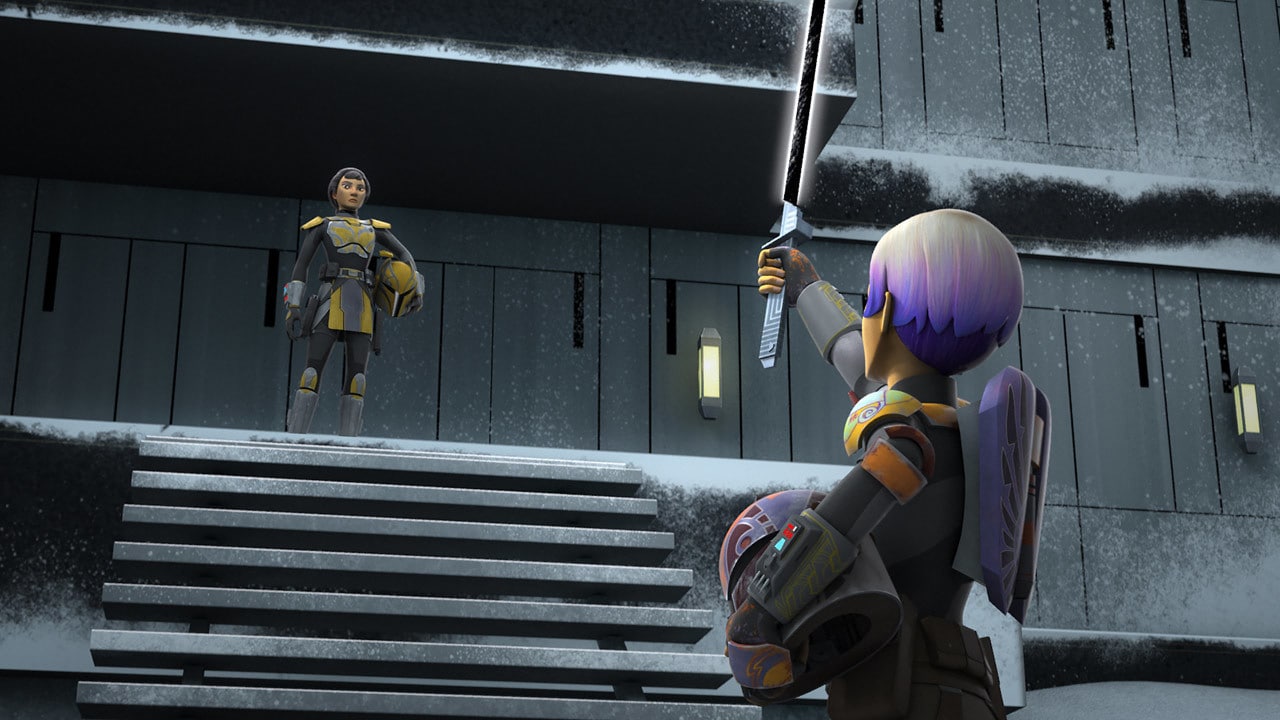 Sabine returned to her family’s home to mend her relationship with her mother, but Imperial governor Gar Saxon had other plans for her and took the Darksaber. Sabine bested him in combat, fully earning the right to bear the blade as well as the respect of her family and clan. Sabine, her family, and Fenn Rau began their own mission to reclaim Mandalore from the Empire.

As the civil war on Mandalore ultimately drew to a close, Sabine offered the Darksaber to Bo-Katan Kryze, an important figure in the liberation of Mandalore -- and Duchess Satine’s sister. Bo-Katan accepted the symbol of her people and became the next leader of Mandalore, bracing for an uncertain future and retaliation by the Empire.

Fall of the Empire

The Mandalorian hasn’t offered many details on the fate of Mandalore in the Galactic Civil War. The cost of rebellion was a high one for the proud planet, turning the sight of Mandalorian armor into a rarity in the years following the fall of the Empire.

In the first-season finale, Moff Gideon, former officer of the Empire, emerges from the wreckage of his fallen TIE fighter. And he wields the Darksaber...