The actor talks to StarWars.com about playing a younger version of her fan-favorite character. 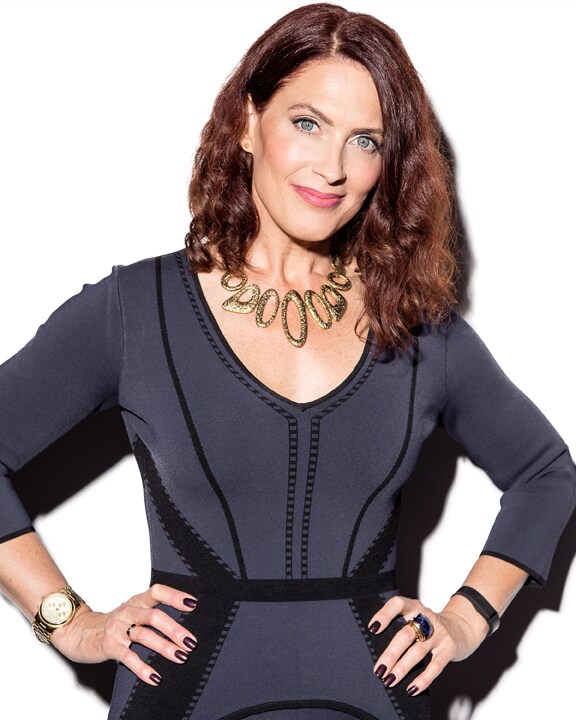 For Vanessa Marshall, it wasn’t even a question. But when the producers of Star Wars: The Bad Batch had an idea to tell an origin story of sorts for Hera Syndulla, who Marshall has voiced for years, they first reached out to see if she’d want to return to the role.

“I got an email asking if I would be interested in doing this,” Marshall says, chuckling. “Of course! I was so blown away to get this email and did not expect it at all. I had no idea what it would look like or how they would present it or in the context of what narrative. I had so many questions.”

Marshall would have to wait to get her answers. As she would find out, though The Bad Batch focuses on a gifted squad of clones and their young charge, Omega, following the end of the Clone Wars, this would be no mere cameo for Hera.

“I remember getting the script for the first episode the night before recording, and I was completely sobbing. As usual!” she says. “But it was just so moving and I really felt that they captured her innocence at that point, that would blossom into such a brilliant fighter, such a nurturing general, such a strong, iconic female character. But it was great to see her dreams before they came true.”

Star Wars Rebels premiered in October 2014, and it represented a defining moment for Lucasfilm. The animated series was the first canonical Star Wars storytelling to not include input from George Lucas; it followed the beloved Star Wars: The Clone Wars; and it was developed under the guidance of Dave Filoni, who all but studied under Lucas as the supervising director of The Clone Wars. For these not-insignificant reasons, it marked the beginning of a new Star Wars era. Expectations were high and there was a lot on the line with Star Wars Rebels.

It’s safe to say that those expectations were met and exceeded. Star Wars Rebels would tell the story of how the Rebellion came to be, while centering on a small, ragtag group of heroes. It ran for four broadcast seasons and garnered much critical acclaim, including four Emmy Award nominations. When Dave Filoni announced that the series would be ending to a packed crowd at Star Wars Celebration in 2017, fans shed tears.

Among the characters at the heart of Star Wars Rebels was Hera Syndulla. Hera was the ace Twi’lek pilot of the Ghost and the clear leader of her found family, there to listen and offer guidance one minute, blasting stormtroopers and leading a quick escape the next. If any character in Star Wars Rebels represented the ideal rebel, it was Hera. Fans loved and love her. And she was brought to life by Vanessa Marshall, who imbued Hera with a dual sense of warmth and authority that was essential for the character. For her part, Marshall identified with Hera right from her first audition. 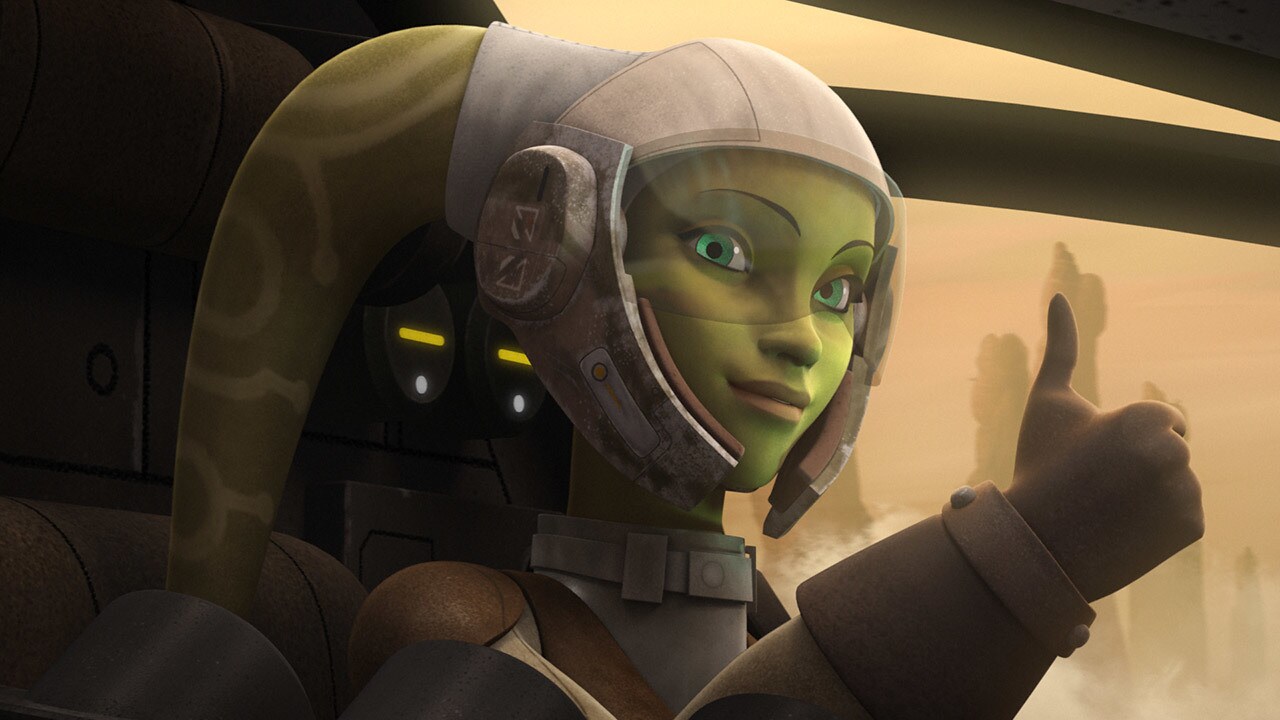 “There are certain issues that I care very much about in my life, in terms of equality and representation and fighting for those who are marginalized, and speaking up for those who may have no voice. This character seemed to do that,” she says. “There’s also a part of me that loves to bring people together.” In addition, Marshall has spent significant time flying with her father, a recreational pilot -- another connection point with Hera. “I love flying with him. So I brought all of these elements together in my heart and my soul to Hera, and it just sort of fit together.”

Still, Marshall is quick to note that she is not an exact match for Hera -- and that she even learned from her character. “I would say that her level of focus far exceeds mine,” Marshall says, laughing. “I am easily distracted and working on it. She actually ended up inspiring me, in ways. I feel like we grew together as the series went on. So to do an about-face and look back at her relationship with her father, and her dealings with her uncle, very much like me flying with my dad -- to be able to go back and explore that was an honor.”

In The Bad Batch episodes "Devil’s Deal" and "Rescue on Ryloth," now streaming on Disney+, we meet a young Hera Syndulla who is not yet the fully-formed leader of the Ghost crew in Star Wars Rebels, but still shows a rebellious streak and a dream of flying. Going back in time as Hera, however, meant that Marshall would need to deliver a different kind of performance. She’d never played Hera as a young girl, and Twi’leks normally speak with a French accent. (Something Hera lost along the way, but reverted to during an angry conversation with her father in Star Wars Rebels. More on that in a bit.)

“That’s the whole point of voiceover. That we can do anything. And I do play kids, and pieces of cheese, and golf balls. I get to do this all day long. It’s kind of the fun that comes with the trade,” Marshall says. “There were a couple of things going on. I’ve studied French for 14 years in school, I’m fluent in French, I had a dear friend who was French. I know the French accent. So there was putting that layer on top of it, and also making her younger. I’m well versed in that exercise, but this one was sort of two-fold in that it had to be true to the Hera that we know, with a Ryloth accent, and as a teenager. So there was a lot going on. But what I find is key for a most successful experience is to go from the inside out, as opposed to the outside in. What I mean by that is, if I’m trying to affect a sound, it’s not going to ring true. But the minute I put myself in her position, knowing all that befalls her in the future, I was really able to have fun playing with what her innocence might feel like. If I really went from her earnest desire to fly and be free in that fashion, the voice really kind of found itself.” 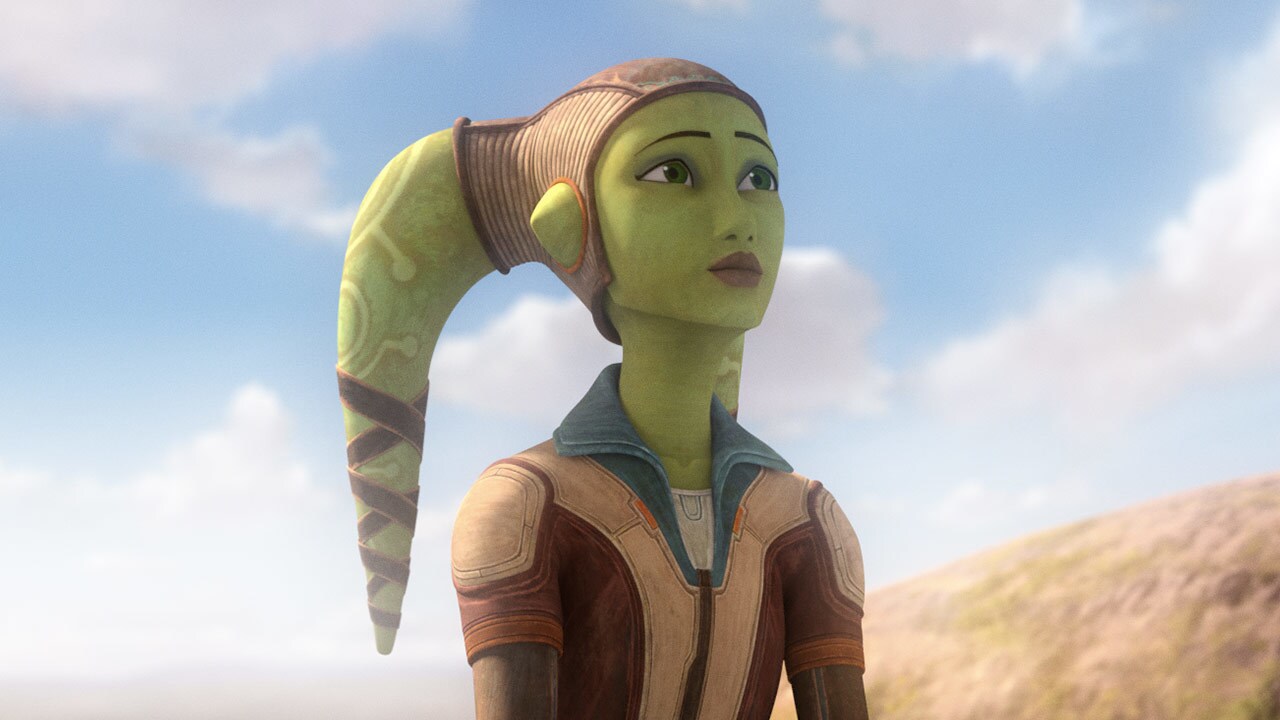 When the Empire seeks to establish a military presence on her homeworld of Ryloth in the episodes, Hera and her droid Chopper (who would later join her on the Ghost) are quick to take action, and it leads to conflict with her father, Cham Syndulla, a hero of the Clone Wars. In one poignant scene, they clash over how to respond to the Empire; Cham is not ready to pick up arms, while Hera sides more with her uncle, who wants to be rid of the Imperials. While Cham ultimately only wants to protect his daughter, he fails to realize that Hera is too much like him to sit things out. This conversation provides a bookend to a sequence in Star Wars Rebels, in which Hera, years later, confronts her father over their past disagreements and rocky history. 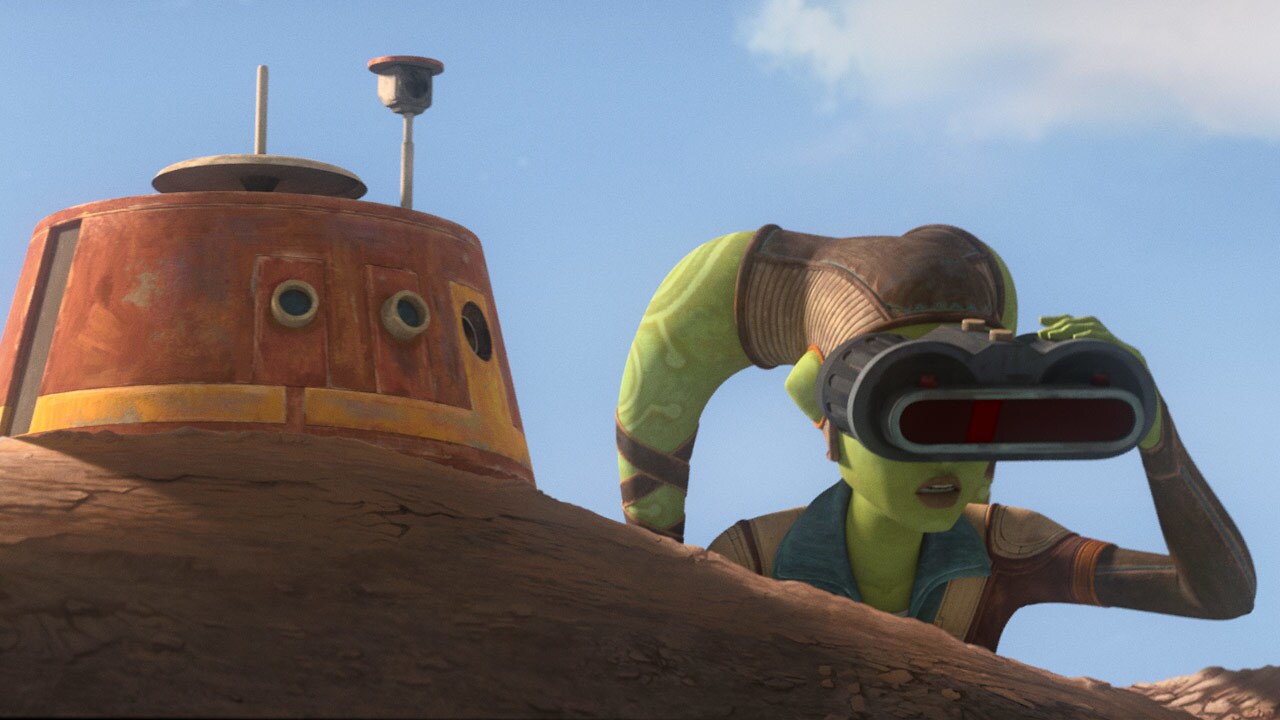 “I thought it was important to demonstrate that while she was subversive in the sense that she was still doing what she wanted to do for the cause she believed in with her uncle, as opposed to following her father’s instructions, that she did have a meek demeanor around him because she wasn’t quite the person that we see in the episodes of Rebels where she confronts him with that Ryloth accent. I wanted it to be a sharp contrast to what we see later on. I was trying to sort of lay the groundwork for what is an incredible transformation for someone who is yearning.” 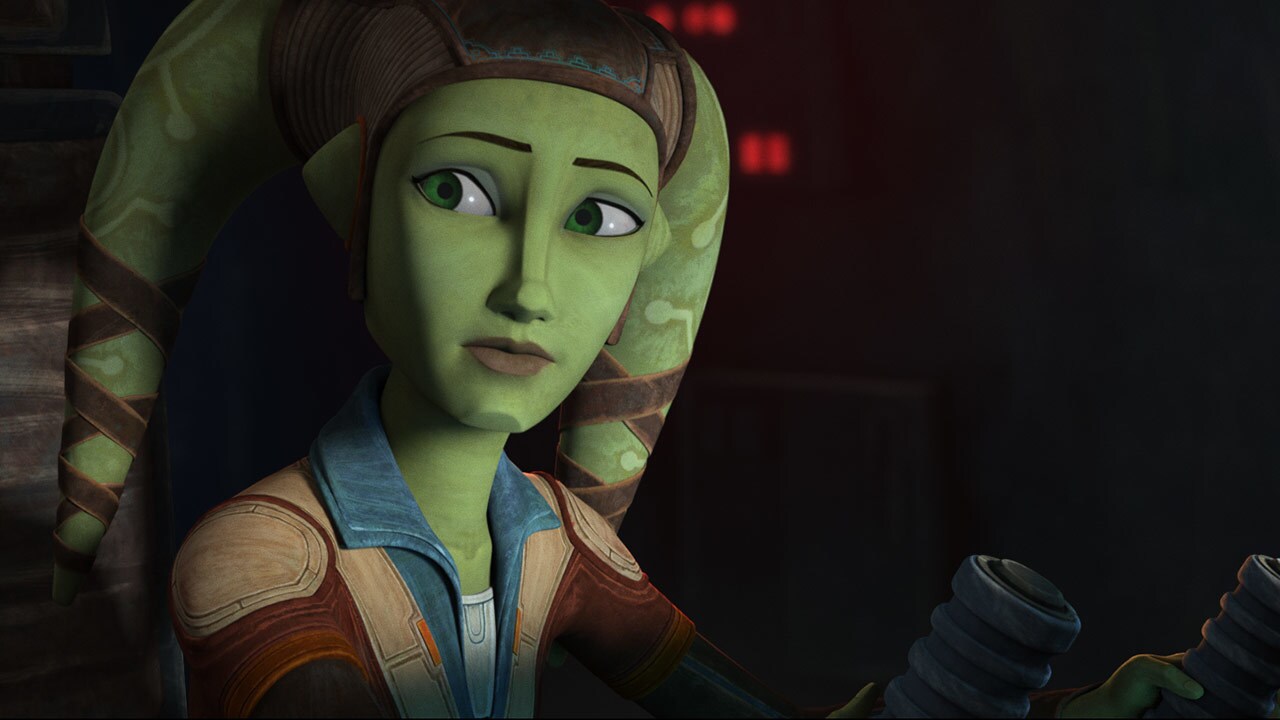 While we do see the rise of Hera the rebel in The Bad Batch, the episodes also take time to show her love of flying and early attempts in the cockpit. Thematically, this desire smartly reinforces the story’s themes of fighting back against occupation; when Hera sums up why she wants to fly, she simply says, “You’re free.”

“I’ll tell you, my father most celebrates the perspective that one gets by being above all the minutia, all the petty grievances, all the very harrowing things that are going on in the world. Once one is up above those things, it’s a much-needed break that cleanses the soul,” Marshall says. “I think for Hera, there’s a spiritual element for her, as well, but there’s also a political one. If she can utilize that ability to help people, and the fact that she does so, to me is remarkable and important to note. I’m just blown away by how far she does go.”

At the time of this interview, Marshall has only seen “Devil’s Due.” That’s because she’s watching the series just like the rest of us: when it’s released on Disney+. And even though she plays Hera, watching the episode still proved emotional.

“I was completely crying the entire time,” she says, laughing. “It was just so great.”

She also couldn’t help but notice how fans responded.

“I’m pleased to see that people were happy to see Hera return and that there were lines quoted. ‘Flying is a feeling,’ ‘Instruments are part of it,’ and ‘You’re free.’ It was very moving to see that, very gratifying. The fans hold a special place in my heart, so to see that they’re pleased means everything to me.”

When you talk to Marshall about Star Wars, you come to understand that she too is a Star Wars fan. The kind that can rattle off ship names and planets and character beats with ease. (“As a Clone Wars fan, to go back to Ryloth was just the best,” she says.) So the opportunity to be on The Bad Batch was also just plain exciting for the actor. 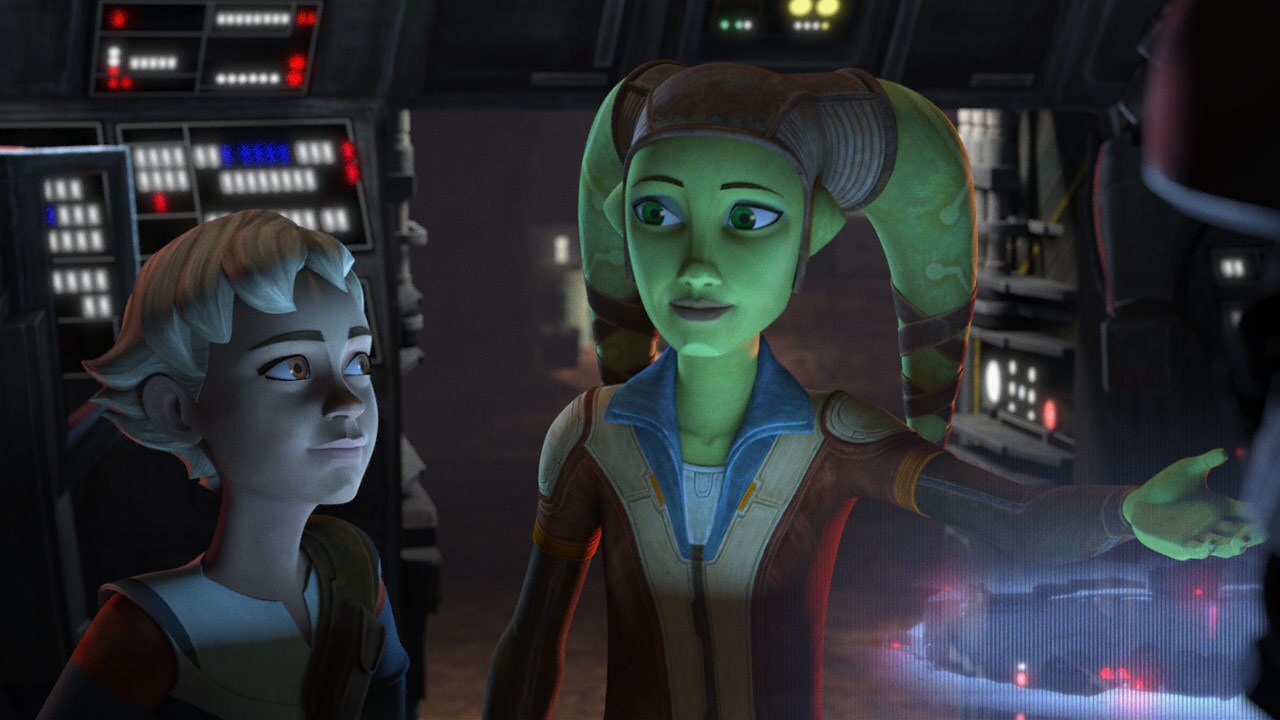 “I am a huge fan of the show and I adore Omega,” Marshall says. “My experience of her, really, is solely through watching The Bad Batch. So for me, as a fan, to see me interact with Omega, I was completely fangirling out.”

Six years after the debut of Star Wars Rebels, Hera looms large in the Star Wars galaxy. The character has subsequently appeared in video games (voiced and performed via motion-capture by Marshall in Star Wars: Squadrons), comics, books, and now The Bad Batch. (She was also mentioned in Rogue One: A Star Wars Story to the delight of fans.) It’s a growing legacy that is not lost on Marshall.

“I’m delighted that she is still relevant. I care about her so much, and I care about what she stands for,” Marshall says. “I’m grateful that it resonates with people.”