Boba Fett is Back: Temuera Morrison on the Return of a Star Wars Icon

Fresh off his appearance in The Mandalorian, the actor talks to StarWars.com about coming back to the galaxy far, far away.

When Temuera Morrison first suited up as Boba Fett for The Mandalorian, it was a long time coming for the actor. “There were moments when I put the armor on and I was looking at [executive producers] Dave [Filoni] and Jon [Favreau], and the expression on their faces just said it all,” he tells StarWars.com. “It felt good. It felt right. It felt like, ‘Yes, I should be wearing this costume.’ And it gave me this sense of, ‘I’m back.’”

Morrison, of course, played bounty hunter Jango Fett in 2002’s Star Wars: Attack of the Clones; as the story goes, Jango served as the genetic blueprint for the clone army of the Republic, and he requested one unaltered clone to raise as a son: Boba, who would go on to become a bounty hunter like his father before him. So even though Jango perished in Episode II -- there’s little coming back from the way Jedi Master Mace Windu dispatched the character -- there was still a chance for Morrison to return to Star Wars as either a clone or the younger Fett.

Morrison had, in fact, wanted to revisit the galaxy far, far away for a long time. He had heard, like the rest of us, rumors about projects involving Boba Fett, but when nothing came to fruition he “kind of lost hope.” It wasn’t until Favreau and Filoni invited him over in August 2019 and Morrison saw himself, literally, in Star Wars once again, that he believed.

“I went to have a meeting at their office, and I was put in a room to wait. I got there quite early because I was excited, I didn’t want to be late,” Morrison says. “While I was waiting, I was looking at some of the conceptual drawings on the wall, and I suddenly saw an image of a guy that looked like me. I said, ‘Jeez, I’m sure that’s me there.’ But I didn’t want to get too excited.”

Once Favreau and Filoni showed up, however, there was reason to be excited. They wanted Morrison to play Boba Fett, starting the journey that resulted in Chapter 14 of The Mandalorian, “The Tragedy,” streaming now on Disney+. And as evidenced by the high-octane episode, Morrison and Boba are back in a big way. 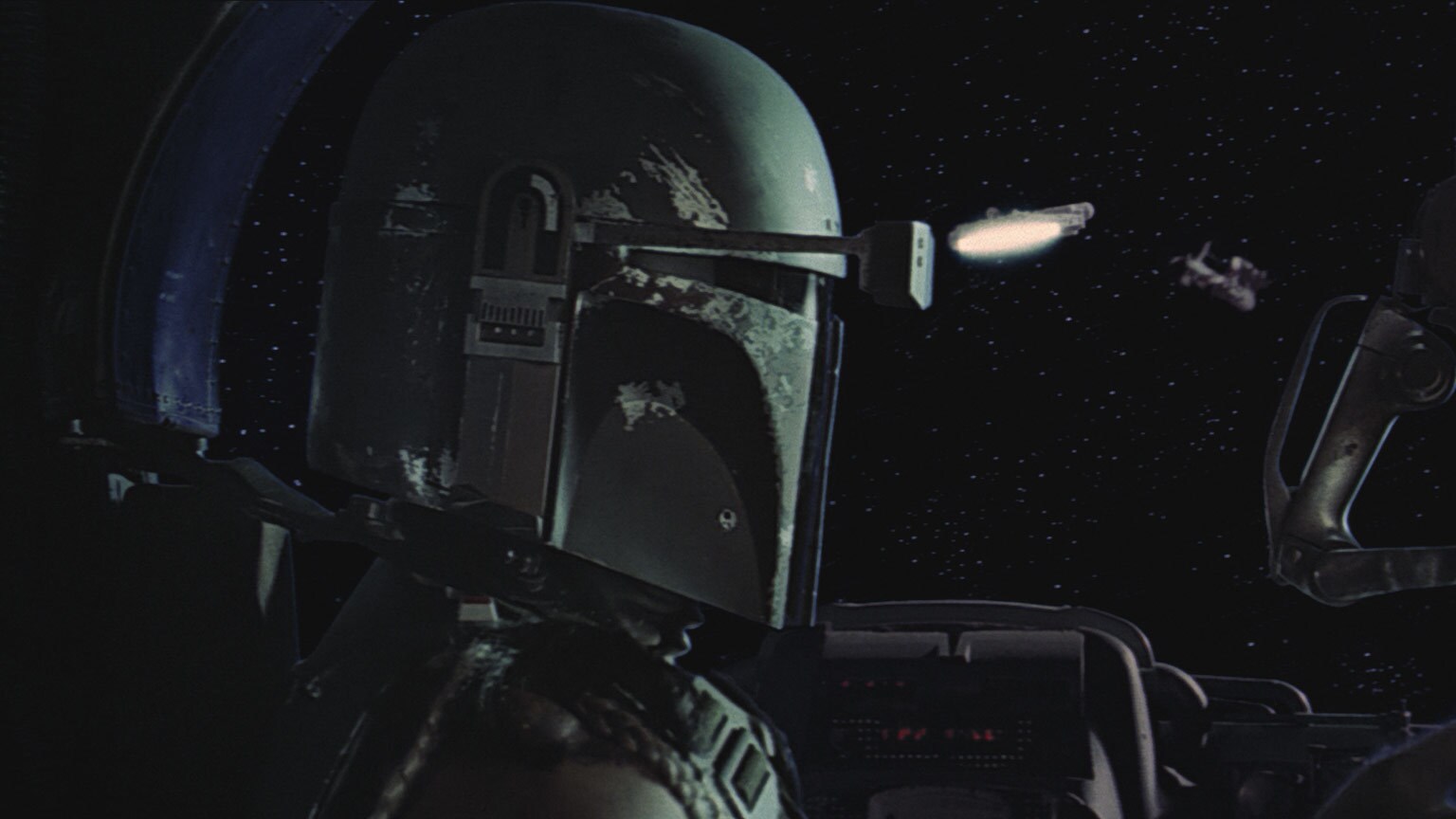 Boba Fett is one of the true Star Wars icons, a character who instantly connected with fans thanks to his undeniably cool look and badassery, and whose mystique only grew through the years. The bounty hunter’s big-screen debut was in 1980’s Star Wars: The Empire Strikes Back, in which he tracks down the Millennium Falcon for Darth Vader, and later delivers Han Solo, frozen in carbonite, to Jabba the Hutt. Last we chronologically saw Fett, however, he was hurtling down a sand dune in 1983’s Star Wars: Return of the Jedi, seemingly swallowed up by a waiting sarlacc pit. For years, fans have wished for the character to come back; though we don’t know the details, Fett survived the encounter. At the start, Morrison and the show’s creators looked to figure out who Fett is now as a person. “We had many discussions,” Morrison says. “They had to outline where they were at, really, and what they were thinking.”

Though he had a cameo in the season premiere of The Mandalorian and his return was teased in Season 1, Boba makes his full comeback in “The Tragedy.” Directed by Robert Rodriguez, the episode finds Boba and Ming-Na Wen’s Fennec Shand tracking the Mandalorian to the planet Tython, where Fett demands the return of his armor. Though he first appears cloaked, Fett soon reveals a scarred face. It’s not a pretty sight, and speaks volumes about where he’s been and what he’s been through to get here.

“I did rely a lot on the makeup,” Morrison says of defining Fett. “I worked with Brian Sipe. When we started to work once things got underway, and we decided I would play Boba Fett and we got over all the excitement, we actually had to sit in the chair and start doing the actual work and the creating, and look at where he’s been and his past. So I spent a lot of the time sitting in the makeup chair, watching what was being applied, and then things just started to happen organically.” Part of that organic evolution of the character would be Fett’s voice, with a gravelly and coarse tone that’s decidedly different than Morrison’s take on Jango.

“It was a conscious choice,” Morrison says. “I thought, every now and then he hit some tonal qualities where, hey, he has been scarred. He has been affected internally, as well. So without sounding too false I wanted to bring a little gravel in there to give it a bit of timbre.” And there was another influence on Fett’s voice and Morrison’s performance.

The actor recalls that when growing up in New Zealand, his father loved Westerns. There would be midnight showings on TV, and Dad would wake the kids to come watch. “We were allowed to get up in the middle of the night and share these cowboy movies from Hollywood with him,” he says. “With The Mandalorian, I guess I’m getting at the fact that it has this cowboy feel. A Western feel. A gunslinger feel.” And in working with Morrison, Favreau and Filoni often referenced classic Western actors like Lee Van Cleef, Richard Harrison, and Clint Eastwood as touch points. “You’ve got all these great actors from the cowboy days, which I could relate to in a way, from growing up with my dad loving cowboy films. So we’re bringing that Western feel to the character, as well.”

Before every shoot, Morrison would meet with Favreau and Filoni, diving deep into Boba’s motivations, with Filoni in particular offering valuable backstory. Indeed, Filoni and George Lucas told several tales about young Boba in the animated series Star Wars: The Clone Wars, particularly his first steps into the underworld after the death of his father. “It’s just a wonderful process and it’s so rewarding. And they include me, as well, if I’ve got ideas and suggestions,” Morrison says. “I got as much information as I could, especially from Dave Filoni, in terms of Boba’s relationship with other characters and some of the history, which he all has in his mind. He’s like a walking encyclopedia, that guy.”

In “The Tragedy,” Fett and Shand end up joining forces with the Mandalorian to battle stormtroopers in a stylistically energized, visceral, and often brutal sequence. (It is, indeed, an unmistakably Robert Rodriguez episode through and through.) Morrison’s Fett, in particular, is all clenched teeth and anger. Part of this feel stems from Morrison’s own culture. “I come from a warrior background in New Zealand,” he says. “I’m a Māori and I’ve been trained. It gives me something to draw on. I was trained as a young boy back in New Zealand in the art of our haka [warrior dance]. ‘Ha’ is the breath, and ‘ka’ is the fire. I’m using my warrior background as a source of energy and as a source of confidence.”

Morrison connected with Rodriguez on the shoot -- even sharing guitar chords on down time -- and worked together to fully realize Boba as a force to be reckoned with. “Within Boba, if he decided to erupt, he’s like a small volcano,” Morrison says. “And Robert was drawing a little bit of that out of me, as well. So when we do those fight sequences, there is a bit of rawness there, there is a bit of brutality there.” Fett’s weapon of choice in “The Tragedy” is a staff, which he uses to greatly satisfying effect in smashing stormtrooper helmets. If you were wondering, that is, in fact, Morrison wielding it, as he’s fluent in the Māori art of stick fighting. “I was able to bring that into this production. Robert could see that I could use the weapon and swing the stick around. In our own culture, we have a staff that’s called a taiaha. I’d been trained in that as a young boy, as well,” he says. “I’m trying to push it into a nice place. You don’t want to get this guy upset. He’ll rip you to pieces.”

Still, as dangerous and deadly as Boba Fett is in “The Tragedy,” he also emerges as something else: sympathetic and honorable. While bounty hunters aren’t necessarily villains, the Fett of The Empire Strikes Back and Return of the Jedi was definitely an antagonist. Here, Favreau, Filoni, Rodriguez, and Morrison accomplish a great feat in giving us more of Boba’s background -- his father was indeed a Mandalorian, and that armor is rightly his -- while showing that he has a code. When Fett gets his armor back, he doesn’t run away. He continues to help the Mandalorian, promising to fulfill his debt that the Child, abducted by dark troopers, will be returned safely. In these moments, Fett becomes less a volcano, more a cowboy hero. “I think that’s where I come into it,” Morrison says. “In bringing that humanity and keeping it kind of simple. Giving him values.”

When StarWars.com speaks with Morrison, it’s the morning after “The Tragedy” is released. Morrison hasn’t seen the episode yet, and he’s curious about the fan reaction. When I tell him I loved it and that online chatter seems very, very positive, he’s overjoyed. “It gives me a lot of encouragement,” he says.

But this return to Star Wars has also given the actor a moment to reflect. “I count my blessings and I’m very grateful. Grateful to George, in fact, for giving me Jango Fett. And that’s how this whole thing has come about,” he says. “Just very grateful for being involved in this wonderful production.”

That little boy in New Zealand watching cowboy movies -- and his dad -- would be proud.