Star Wars is about family. You’d be hard-pressed to find a better example of this in our own galaxy than the charming mother and daughter hosts of the podcast Geeky Bubble. Johnamarie Macías and her mother, Maria, are inspired by Star Wars animation, not just as a fascinating topic of discussion for their podcast, but also in their everyday lives. 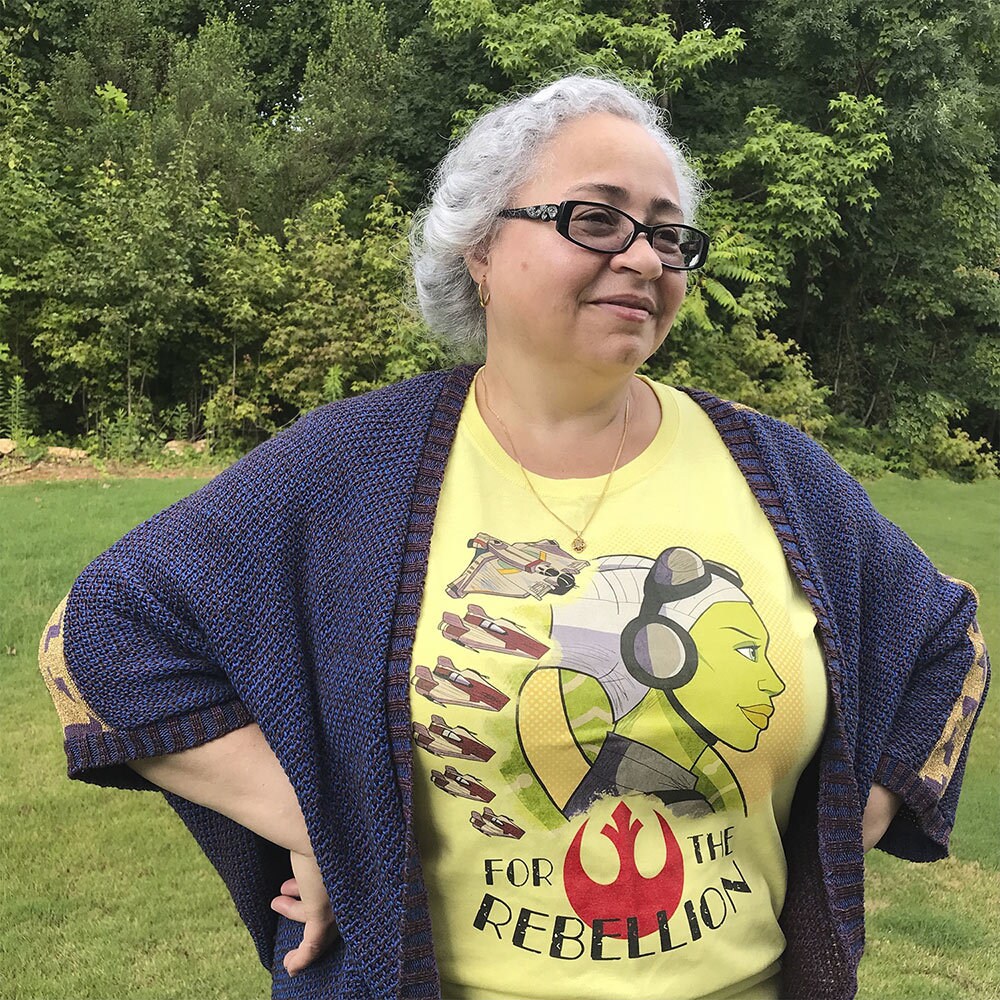 Maria remembers seeing the original Star Wars in the movie theater with her family. “I was hooked from there,” she tells StarWars.com. “I could relate to Luke’s situation because we came from similar backgrounds, so for him to have powers and be the hero, it was amazing.” 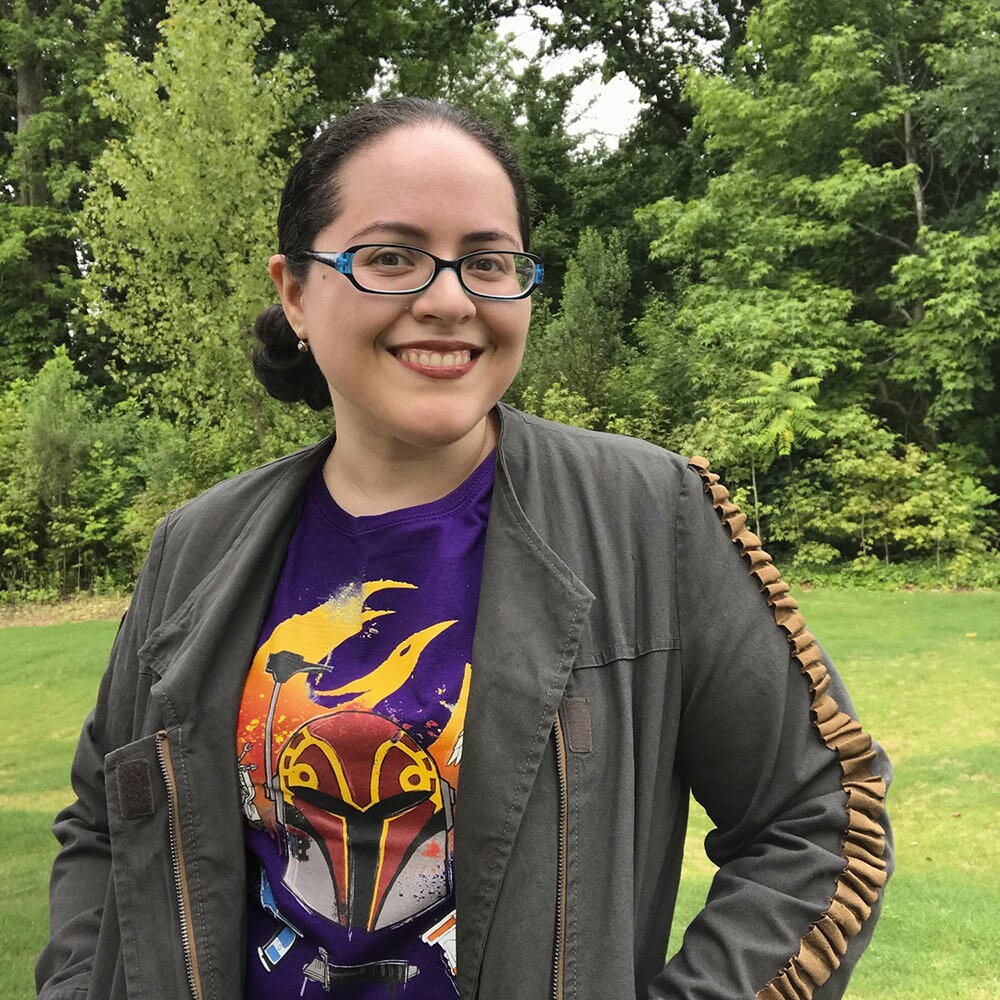 What started as a family affair continued when Maria had children of her own. “I fell in love with Star Wars at a young age,” Johna says. “I remember watching A New Hope in my living room whenever it appeared on television, playing Episode I: Racer and Rogue Squadron with my brother during the weekends, and going to the movie theater to watch the prequel films.”

While many parents and their kids enjoy the galaxy far, far away together, it’s rare for others to get to listen in as they share their insights with each other. Johna had the idea for a podcast in 2014 as Star Wars Rebels geared up for its premiere. She was excited to talk about the upcoming animated series. “Star Wars Rebels captures everything I love about Star Wars,” she says, “from reinforcing the power of hope to exploring some of the weirder aspects of the Force.”

Even though her mom didn’t even know what a podcast was, Johna impulsively invited her to join her on air. Maria agreed.

“I knew it would be a great way to spend time with her,” Johna recalls. “Oftentimes, parents and children drift apart as they get older, so I wanted us to bond over Rebels together and have lengthy discussions about it. I’m so thankful she went along with my crazy idea because we’ve had so many laughs and insightful conversations ever since.”

The podcast grew in popularity, and in 2017 Maria and Johna had a very special guest: Dave Filoni stopped by to chat with the pair about Star Wars Rebels, Forces of Destiny, and more. He also revealed Agent Kallus’ first name for the first time in the remarkably candid interview. Johna would get to talk to the Lucasfilm luminary again in 2018 at a special screening at Lucasfilm headquarters in front of an enthusiastic fan audience. 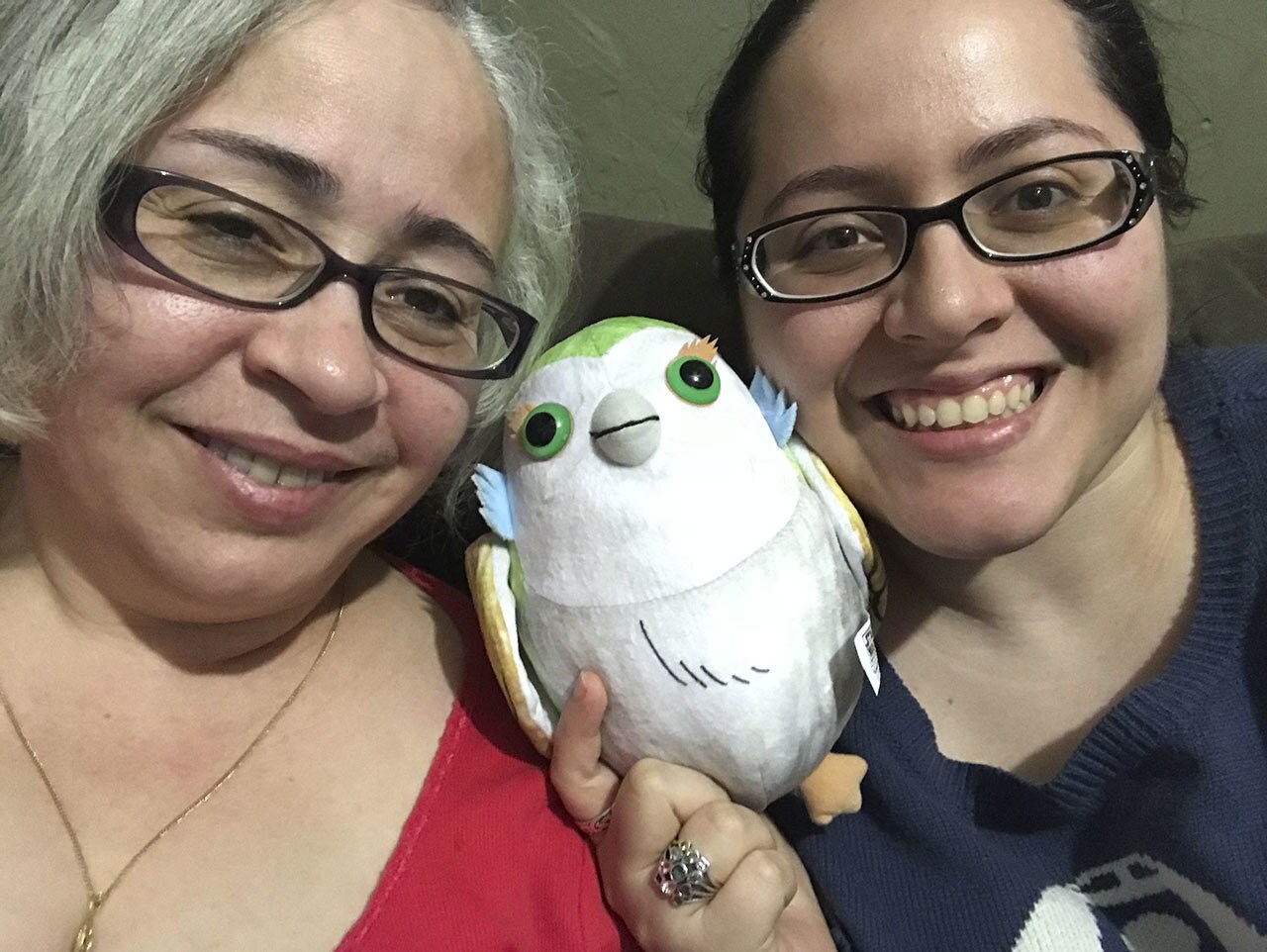 In the years since, the podcast, originally called Rebels Chat, became Geeky Bubble as their topics expanded. And although they now explore a range of topics, Johna has never lost her love of Star Wars Rebels, organizing an annual “Rebels Remembered” day in the series’ honor. And the hosts continue to enjoy other Star Wars animation, including Star Wars Resistance and The Bad Batch.

“Animation opens up a lot of deep and profound conversations that everyone should be having,” Maria says, revealing that she and her daughter are creatively inspired by the colorful and hopeful tones of the stories.

But their love of Rebels in particular is apparent in their shared choice for favorite Star Wars character: Ezra Bridger.

“I love what he represents, a little boy coming from nothing and becoming a hero,” Maria says. “That’s something that always appeals to me. For you to have nothing and then become something bigger and give selflessly, it’s amazing and inspiring to see.”

“I know he started out rough around the edges, but he grew up to be a genuinely selfless and courageous person who fully embraced his warm-hearted and empathic nature,” Johna agrees. “I admire him and adore him so much, and even though he’s a fictional character, I hope he’s okay and drinking lots of water!”

Maria has learned a lot about her daughter during their Star Wars conversations. 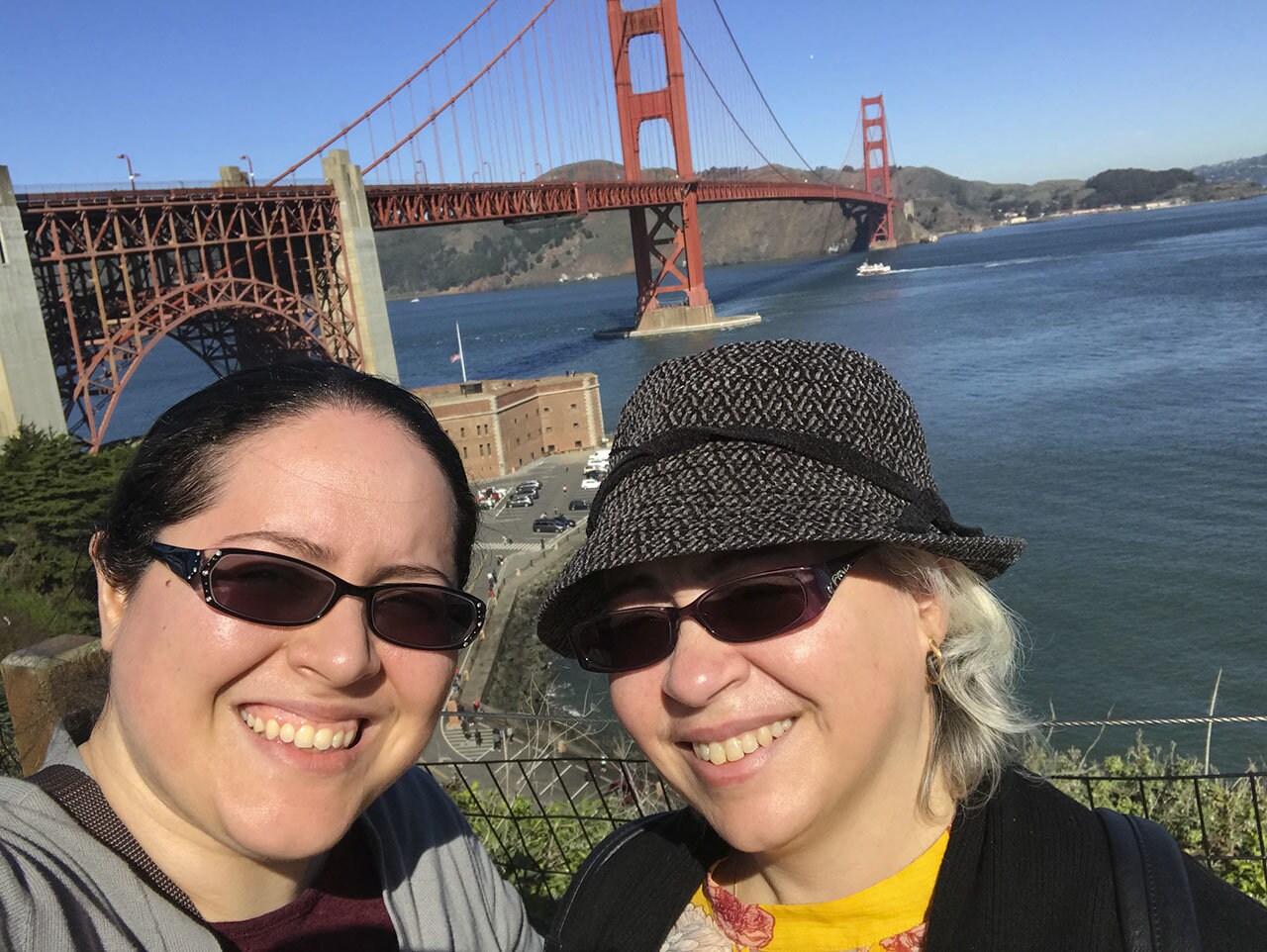 “Doing the podcast with [Johna] showed me so much about her character,” she says. “It really amazes me and boosts my ego to know she’s grown into this awesome person because I don’t measure success by fame, glory, or money. I measure success by the ability of a person to form their own opinions, to fight for their own dreams and views, and to make their own informed decisions.”

And Johna is just as in awe of her mother. “My mom is the Yoda in our family,” she says. “She’s constantly blowing my mind with her extensive knowledge about life in general and how she finds ways to relate that back to Star Wars. She brings such a unique and fresh perspective to the show. I’m lucky to have her as my co-host, but I’m also extremely lucky and grateful to have her as my mom.”


What’s your favorite Star Wars movie and why?

Johna: I know this isn’t a movie that immediately pops into people’s minds, but my favorite Star Wars movie is the Star Wars: The Clone Wars feature film. I remember going to the movie theater by myself on an early weekday morning and coming away feeling excited about the future of Star Wars animation. That movie and the series that followed helped pave the way for other shows like Star Wars Rebels and Star Wars: The Bad Batch.

Maria: Years ago, my favorite movie was Return of the Jedi. It was the end of the saga, and the characters all had hopes for a better future. I also loved watching Luke coming into his own, but then, Rogue One came out. That was an awesome movie! You never know what sacrifice is until you have to give yourself. That scene in the end, when Jyn and Cassian hold each other as everything explodes around them, was so impactful. And I love how that was the beginning of everything else in the saga.

Would you join the Rebel Alliance or the Empire?

Johna: I would join the Rebel Alliance, but I also wouldn’t hesitate to strike out on my own and help people on my own terms. It’s a very Jyn Erso approach, like when she and other like-minded rebels felt frustrated at the Alliance Council’s inaction in Rogue One. It’s also an Ezra Bridger move because he made it clear to Mon Mothma that he wanted to go back to Lothal and help his people. So like Jyn and Ezra, I’m a rebel through and through.

Maria: I’m a fighter, so I would choose the Rebel Alliance. In order for good things to happen, you have to fight. You cannot just comply, especially when there’s an oppressive regime seeking to rule the galaxy by any means necessary. And when those freedoms and liberties are threatened, you have to make a stand, so that’s why I would join the Rebel Alliance.

You can have Mando’s Darksaber, Kylo Ren’s unstable red lightsaber, or Luke Skywalker’s green lightsaber. Which do you choose and why?

Johna: I’m a big fan of Mandalorian culture and history, so I would gladly choose the Darksaber. I’d activate it and wave the blade around just to get a feel for it, but I would love to study it. I’d be that one nerdy person wanting to open it to see how Tarre Vizsla constructed it.

If you could align yourself with any group in the Star Wars galaxy -- the Jedi, the First Order, the Mandalorian Death Watch, whatever you want -- what would it be?

Johna: I’m going to choose the Witches of Dathomir. I’d love to align myself with them because they have their own mystical and magical way of tapping into the Force.

Maria: I have the tendency to make life difficult for myself based on the choices I make, so I’m going to go with the Jedi. Like Kanan, I would be a reluctant Jedi, but at the same time, I would be trying to improve the Jedi Order and reminding them what they’re supposed to be like. I would be constantly bumping heads with other Jedi, which is why I said I make life harder for myself, but all because I want the Jedi Order to be better.

Which Star Wars character would you want as a road trip buddy?

Johna: I would have so much fun road-tripping with Chopper! He’s like a giant Swiss Army knife because he comes prepared with all the essentials. He also has a wicked sense of humor, which I love, so we would have the best time on the road together.

Maria: I wouldn’t mind having Maul as my trip buddy! I know that’s a crazy answer, but he would present a challenge every step of the way. Can you imagine going with Maul on a road trip to New Orleans, a place I’ve been wanting to visit? He would bring fascinating remarks, doubts, and crazy moments at every turn.