StarWars.com speaks with Lucasfilm’s Orion Kellogg and Motive Studios’ Ian Frazier about creating “a new take on the classic Star Wars flight games of the ‘90s.”

One never knows when inspiration will strike. For EA’s Motive Studios, the concept for the recently-revealed space combat game Star Wars: Squadrons came at a rather surprising time: while working on another Star Wars game.

“There are a ton of Star Wars fans at Motive, myself included, with a lot of desire to create our own adventures in this universe. This project is one example where that desire resulted in something new springing to life,” Ian Frazier, creative director at Motive, tells StarWars.com. “Back when the team was working on the single-player campaign for Star Wars Battlefront II, they were having a great time with the space missions in particular, and it sparked an idea. Three of the devs -- James Clement, Pat Lalonde, and Steve Masters -- waxed nostalgic about the fun times they had in the late ‘90s playing other flight combat games, and formed an early pitch that essentially asked the question, ‘What would a modern-day Star Wars game focused entirely on the pilot experience look like?’ As a huge fan of the classic Star Wars flight games myself, I was very excited to help answer that question.” 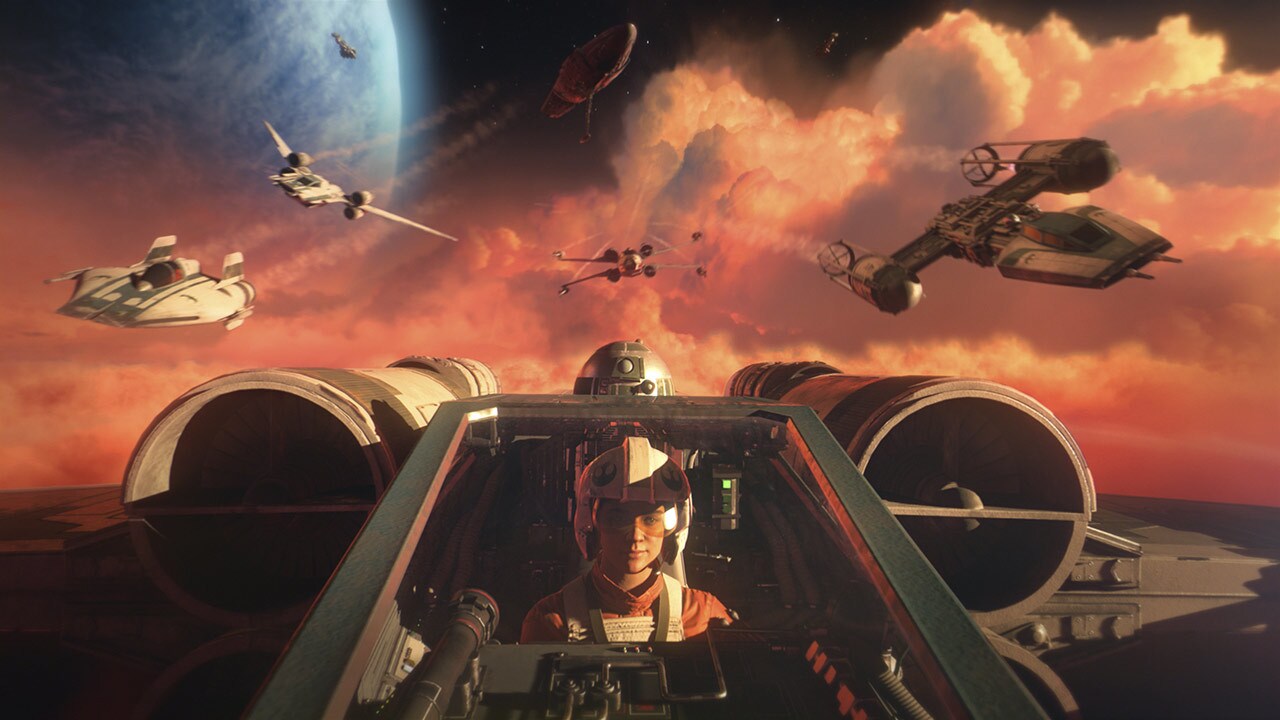 From there, that core group at Motive took the first steps toward realizing this idea. “We formed a very small conception team and started working on the game design and art direction. The first thing we built was a 5v5 dogfight prototype,” Frazier says. “From that prototype, the game that would eventually become Star Wars: Squadrons was born.”

And thankfully, they ended up with the support of Lucasfilm.

“So many millions of Star Wars fans have dreamt of being the hotshot pilot that gets to take the one-in-a-million shot. But that shot only lands with careful planning, great skill, and an experienced team by your side. In Motive, we have all of those ingredients,” says Orion Kellogg, senior producer at Lucasfilm Games. “It was easy to rally behind the dream of fine-tuned Star Wars dogfighting and it has been thrilling to see the dream become reality.”

Jumping in the cockpit

Squadrons, coming October 2, 2020, for PlayStation 4, Xbox One, PC, and virtual reality will be the first major Star Wars flight game released in years, and the first for this generation of consoles. If you’re a Star Wars gamer, that’s a big deal. As Frazier notes, Star Wars space combat games like X-Wing, TIE Fighter, and Rogue Squadron are among the most beloved Star Wars games ever made. That’s something Motive and Lucasfilm did not want to shy away from.

“We’re so inspired by all of the Star Wars stories and, naturally, the games that have come before us. They’ve led to us taking this shot and we’ll give it everything we’ve got,” Kellogg says. 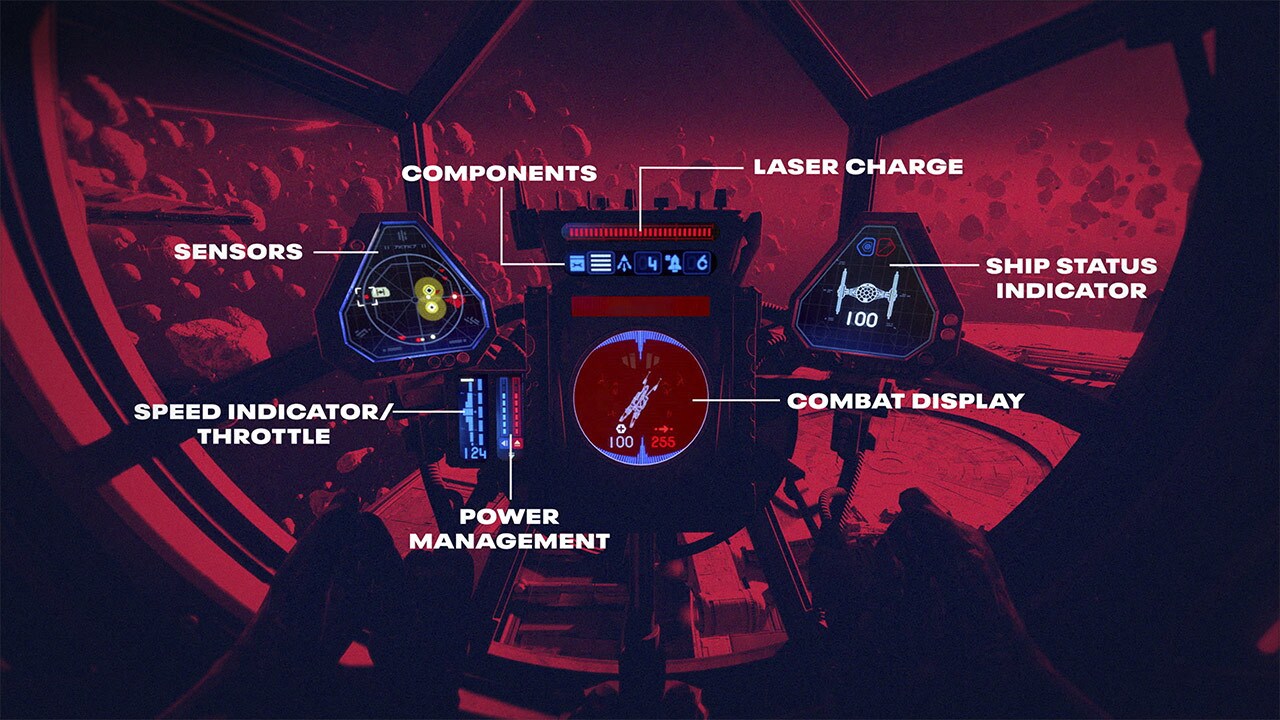 “At a high level, our goal has been to create a new take on the classic Star Wars flight games of the ‘90s, while taking advantage of all the possibilities of modern-day technology to make the most immersive starfighter game we could,” Frazier says. Indeed, from graphics to customization to handling, Squadrons aims to deliver on the fantasy of piloting in the Star Wars galaxy in new ways.

“Fundamentally, we want to let players sit inside an X-wing or TIE fighter and really feel like they’re there, with a level of control and fidelity that makes the whole experience feel real. We want you to master the controls, form up with your squadron, and be an ace pilot in the midst of an epic space battle,” Frazier says.

Squadrons looks to have a major focus on multiplayer, particularly 5v5 squadrons going head to head in dogfights and large-scale conflicts, courtesy of a mode called Fleet Battles. But none of that would fly, pun intended, if it didn’t feel right.

In developing Squadrons’ gameplay, Frazier and his team were determined to get the feel of Star Wars space combat as authentic as possible with the help of Lucasfilm. This meant research and a lot of testing. The first thing the Motive team did, according to Frazier, was rewatch all of the films and discuss how Star Wars space battles are unique from those seen in other sci-fi franchises, making particular note of the influence from WWII aerial combat footage. They also replayed classic Star Wars flight games, as well as the Starfighter Assault mode from Battlefront II and several other space combat games. 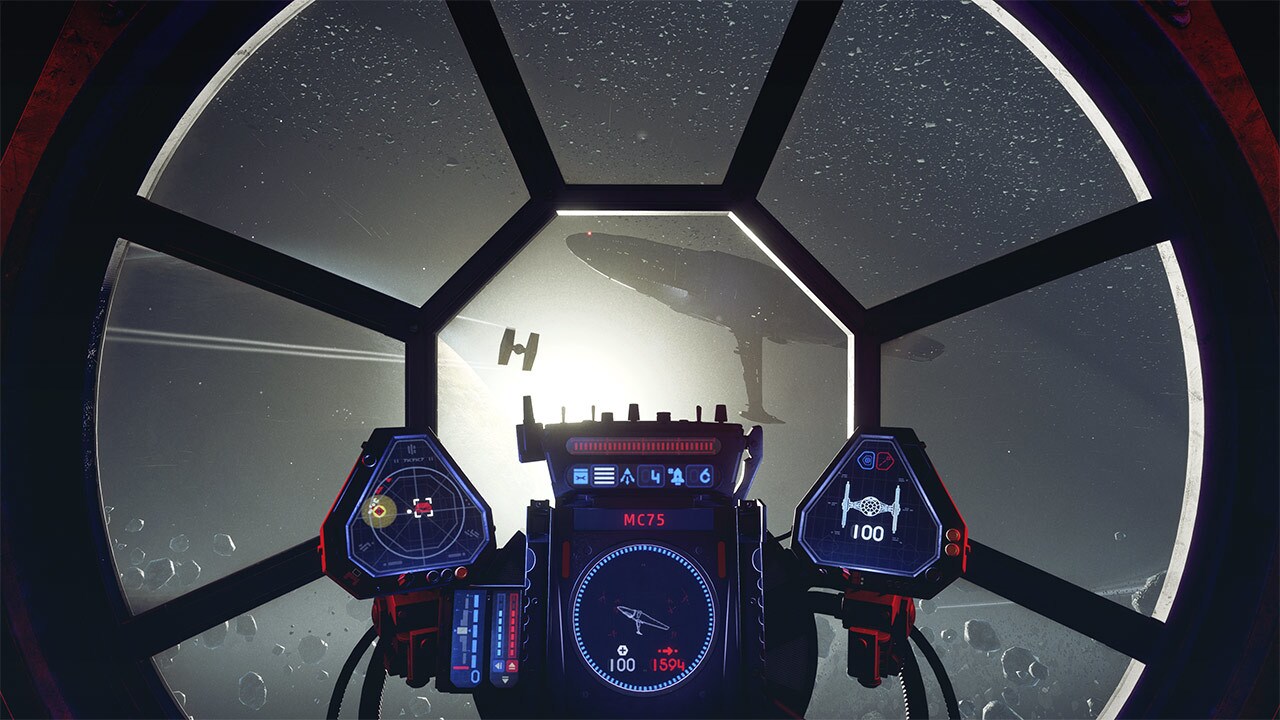 “Once the team was in the right head space, we built out the core flight model for the X-wing and TIE fighter, fundamental systems like targeting, and the power management mechanic that lets players divert energy to engines, lasers, or shields, which is where a lot of the interesting moment-to-moment tactical choices are made,” Frazier says. “We got that basic prototype up and running on both traditional display and VR, then started daily team playtests. Each day we’d play PVP dogfights -- pure X-wing versus TIE fighter mayhem -- debrief and discuss key feedback, then make some changes and give it another go the next day. That constant cycle of playtest and iteration continued as the team and the scope of the game grew, and it still continues today.”

One element stands out to Lucasfilm’s Kellogg, however, as an essential ingredient to Squadrons.

“We’ve known from the early days that teamwork is at the heart of Squadrons,” Kellogg says. “As you watch TIE fighters swarm your position or race to intercept Y-wing bombers bearing down on your Imperial Star Destroyer, you’ll need a good teammate by your side. The voice chat really makes you feel part of a squadron -- and the ping system is invaluable and easy to use, even in single-player, where you can ask your buddies to cover your tail. These moments of camaraderie really make the heroic ‘ace’ moments stand out: What’s more Star Wars than feeling like you saved the day for everyone?”

While multiplayer is certainly a focus for Squadrons, there’s also a significant single-player story. Like the multiplayer component, it’s set shortly after the events of Star Wars: Return of the Jedi, and players will experience the story from the perspective of both the New Republic and the remnants of the Empire. “We’ve had a lot of fun building this story for the single-player side of the game, and as you’d expect, we’ve worked very closely with the Games team and Story Group at Lucasfilm to ensure we’re building something that feels authentically Star Wars, speaks to the fans, and fits smoothly into the universe,” Frazier says.

“We hope you’ll walk away understanding the pride of the TIE fighter pilot or the bravery of an X-wing pilot and what it’s like when two galactic superpowers clash as equals,” Kellogg adds. “Working with Motive to bring the characters and crew to life has been a real treat. We’re very excited to introduce the Empire’s Titan Squadron and New Republic’s Vanguard Squadron to Star Wars fans. I’m also super inspired by some of the environments we get to fly through and stunts we get to pull off as we solidify this exciting point in the Star Wars timeline.”

The timeline setting is also important in that it informs what craft we’ll take to the stars. As seen in the game’s trailers, fans can look forward to iconic ships like the X-wing, Y-wing, TIE fighter, and a few surprises.

“Squadrons is set a few months after the Battle of Endor, so our selection of starfighters consists of anything you’d see in the final days of the war. You’ll see many of the ships from the major battles of the original trilogy, plus some cool new ones introduced in Rogue One,” Frazier says. “In addition, the two main New Republic and Imperial squadrons featured in the game have gotten creative and started to modify their starfighters in new and exciting ways after the destruction of the second Death Star, so you might come across modified Y-wings and TIE interceptors packing abilities you never saw in the movies...” 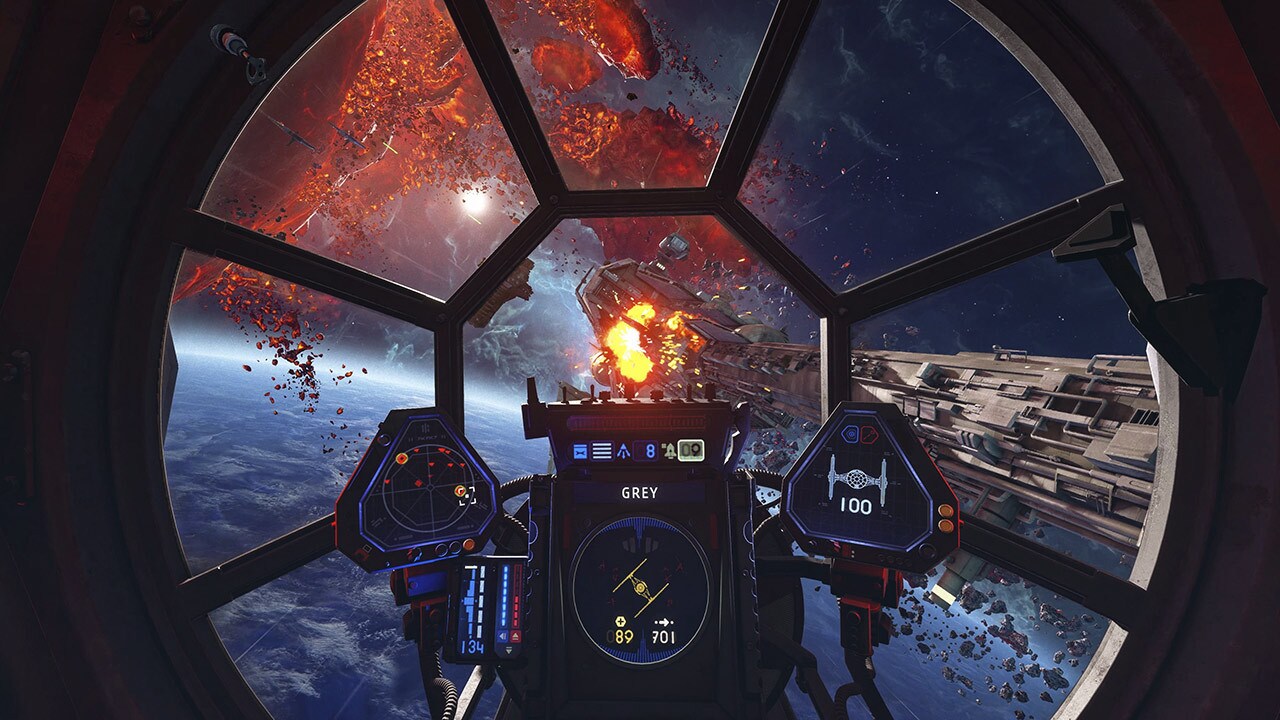 While they can’t reveal the full lineup of starfighters included [Note: Since this interview, the complete roster has been revealed.], both Kellogg and Frazier have picks they’re excited to see players try out.

“Oh, I can’t resist the TIE reaper,” says Kellogg. “Squadrons is the first game really bringing this ship to life and it’s a beauty: it rides low and slow, tricked out with all sorts of ways to help your teammates survive…or to thwart your enemies.”

“I’m going to go with my personal favorite, the RZ-1 A-wing,” says Frazier. “It’s crazy fast and nimble, it can be modified with alternate shield generators and a particularly cool countermeasure system, and it can sustain a longer engine boost that most ships, which opens the door to some insane maneuvers. It’s a challenging ship to master, but I think players are really going to get a kick out of it.”

What’s it like to pilot an X-wing or TIE fighter? That question lies at the very heart of every Star Wars flight game, and their lasting appeal: They have been a conduit to touching that dream of flying in a galaxy far, far away, which would otherwise be impossible.

So then, back to that initial spark of inspiration for Squadrons -- remembering the Star Wars flight games of yesterday and imagining what a modern take might look like. Now that the world knows about Squadron, and Lucasfilm and Motive have brought their idea to reality, it begs the question: How does it feel to carry on the legacy of Star Wars space combat games for a new generation?

“In a word: incredible,” says Frazier. “As someone who grew up with Star Wars and fell in love with games like TIE Fighter and Rogue Squadron, it feels amazing to be able to bring that kind of experience to life for gamers in 2020.”

“It’s very humbling,” says Kellogg. “Squadrons absolutely has the privilege of learning from the great starfighter games that have come before. We’ve also been inspired by moments in the recent films, books, and TV shows that have expanded the pilot fantasy: yes, you can drift in Squadrons. We really hope that Squadrons will make people smile as they take the winning shot -- or even as they spiral out and try again.”

“I’m excited to see fans enjoy Squadrons as a new take on classic piloting experiences with an unprecedented level of realism and immersion, while a whole new generation of gamers gets to climb inside the cockpit of these iconic fighters for the first time,” adds Frazier. “Knowing I get to be a part of that, letting players really live out their Star Wars pilot fantasies the way I did as a kid? I’m incredibly grateful.”

Watch the new gameplay trailer and check out more new screenshots below. 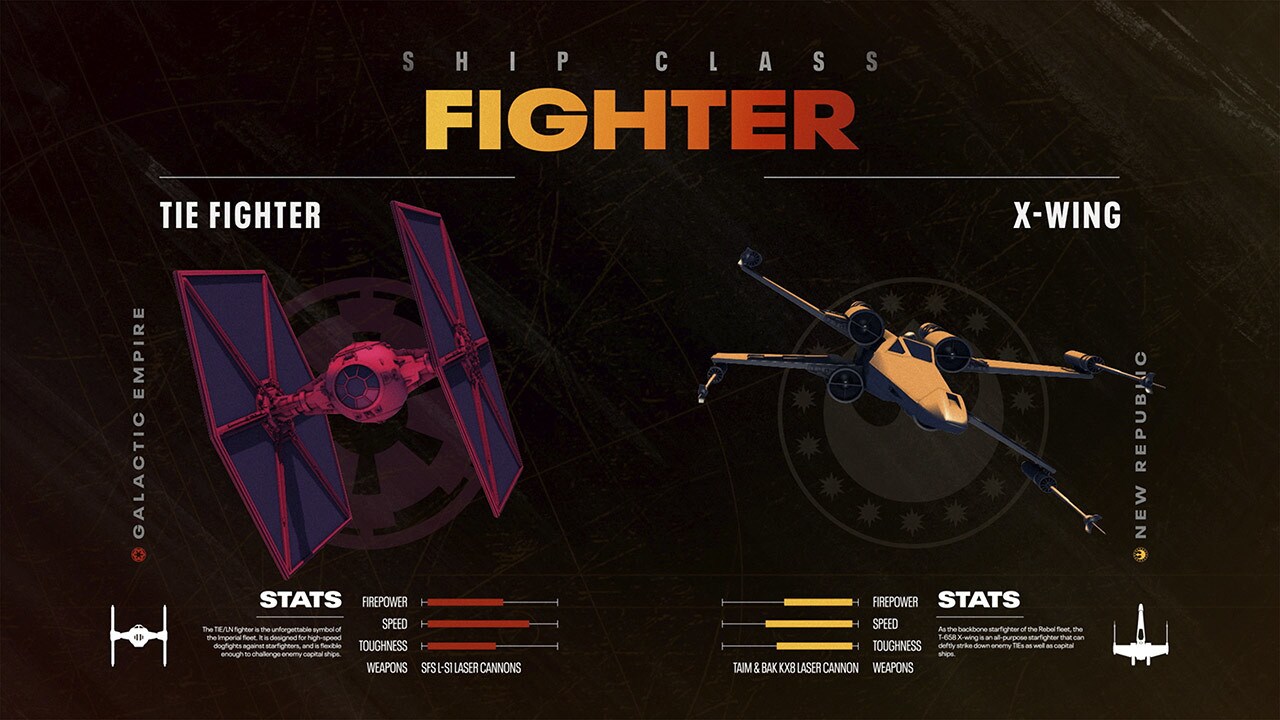 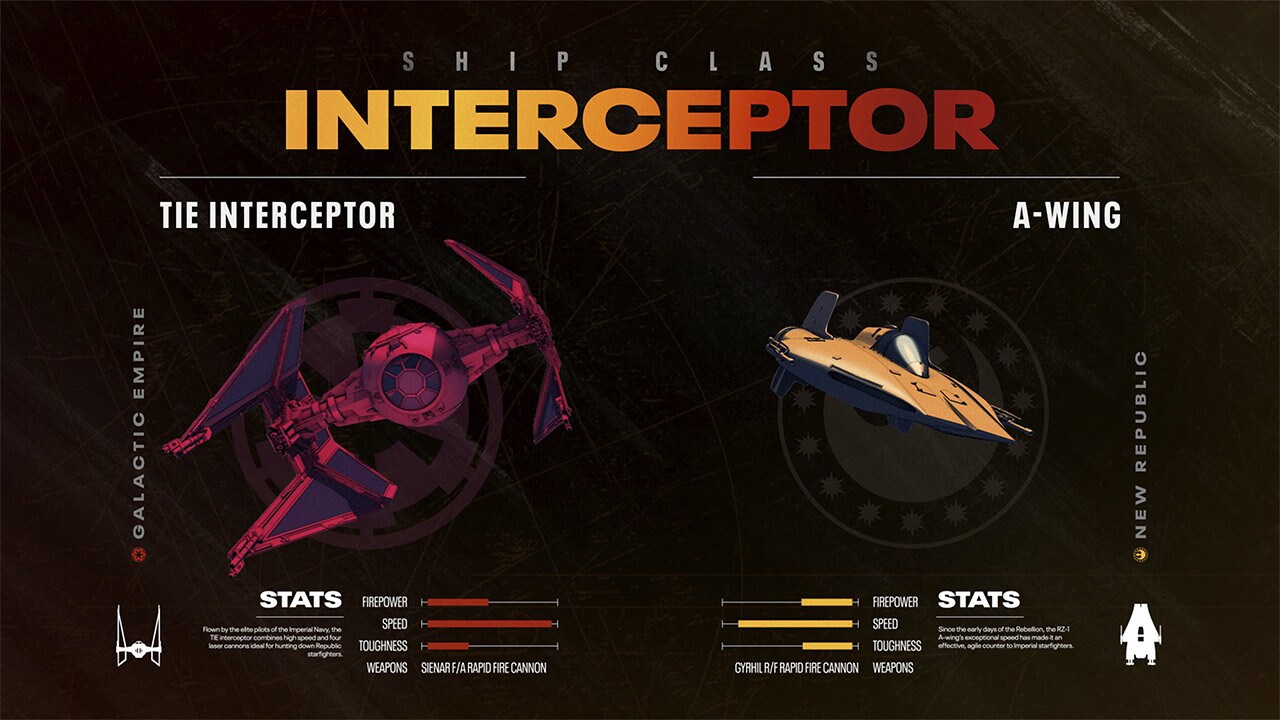 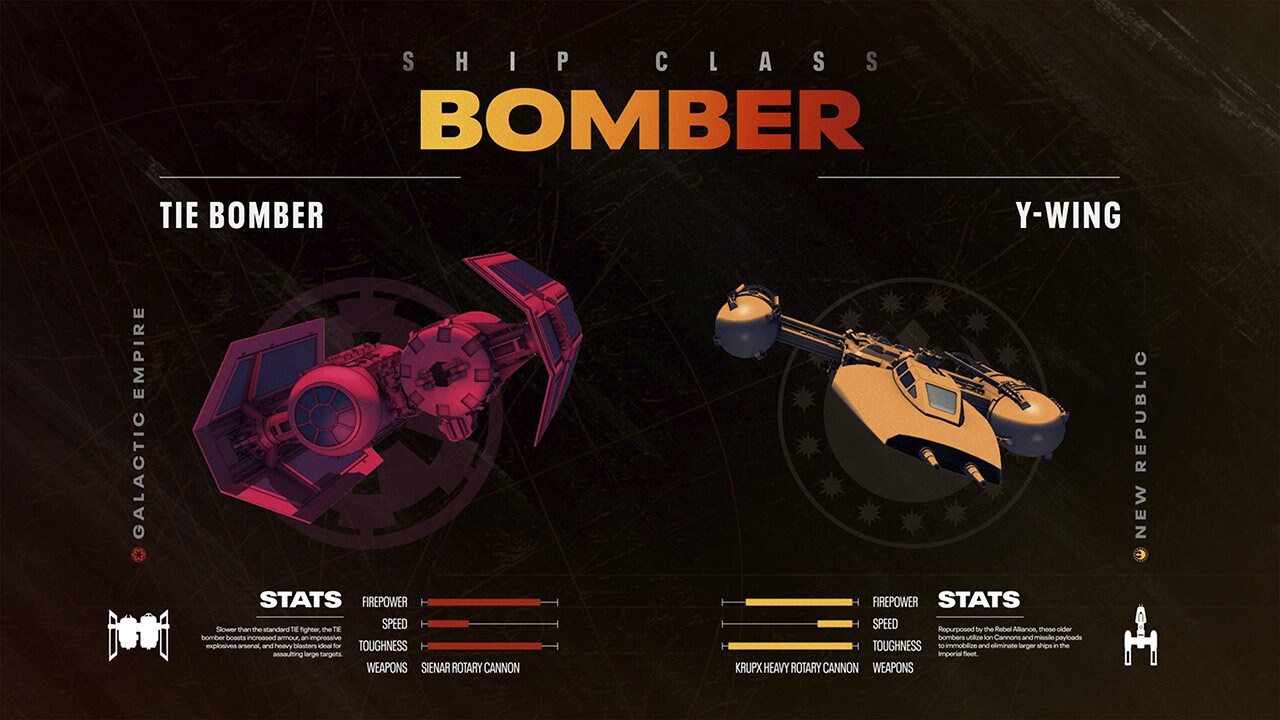 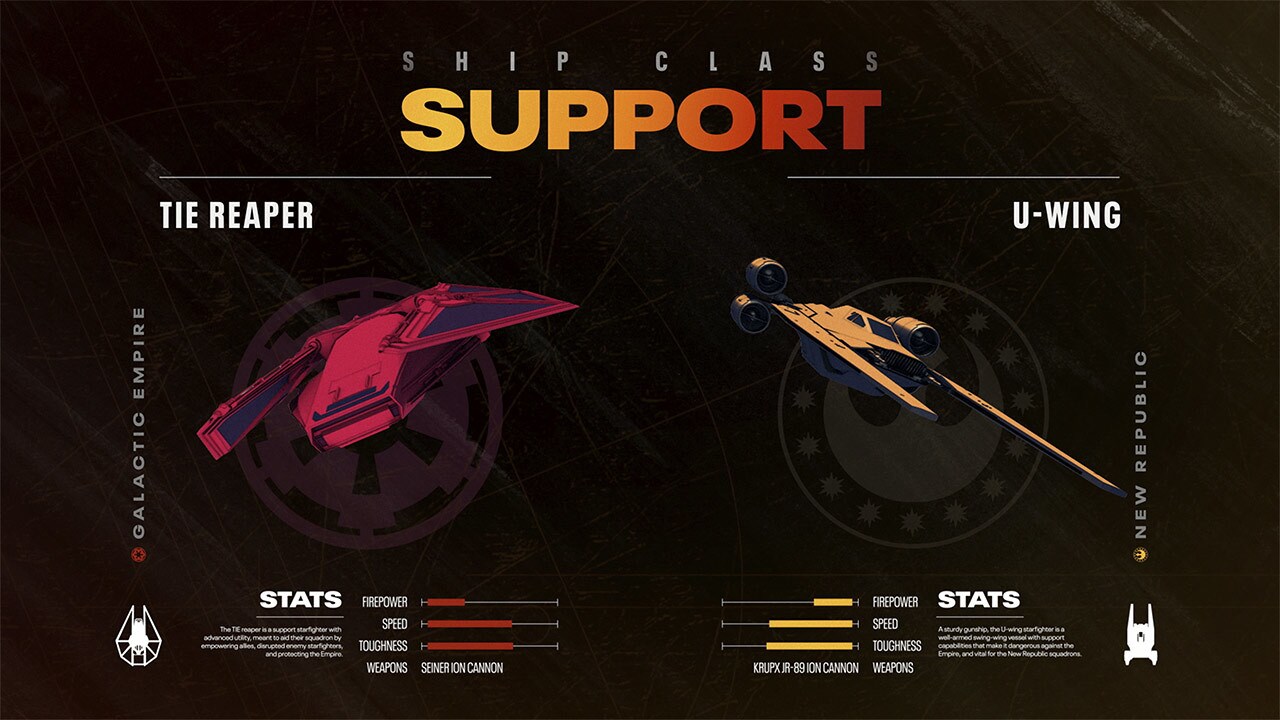 Star Wars: Squadrons arrives October 2 for PlayStation 4, Xbox One, and PC, and is available for pre-order now.