In the title of her June 14 post, Lucasfilm’s Jennifer Heddle used the term “worlds collide” that prompted me to comment. Check it. I wrote that "worlds in collision" was to be in the title of this post, musings on Ben Stevens and Philip Wise’s Dallas Comic Con, a hugely successful event in May that drew 26,000 fans. Since I am blogging, as opposed to doing straight reportage, may I digress for a moment?

When Worlds Collide is a classic sci-fi film referenced in "Science Fiction/Double Feature," the opening number of The Rocky Horror Show. (Yes, I worked on that musical in 1974-76 while it ran at The King’s Road Theatre in London’s Chelsea, but that is another story.) At the time, I knew EVERY line in the show -- “But when worlds collide, said George Pal to his bride, I'm gonna give you some terrible thrills.” Worlds in Collision was a controversial book written two decades earlier by Immanuel Velikovsky. I read it in the early '70s. So there’s my riff on Jen’s allusion.

To return to our time and place, it’s May and I’m just east of the Fort Worth Planetarium in Irving where I experience a number of colliding worlds at the Con. It starts when I arrive at the high-tech Aloft Las Colinas, a hotel surrounded by golf courses. It’s the weekend of the HP Byron Nelson Championship, a major annual fixture in Irving. In the W XYZ Bar in the lobby, golfing fans collide with sci-fi fans. It reminds me of Orlando’s Rosen Plaza during Celebration VI. Nightly, the lobby bar served as our Mos Eisley Cantina which we shared with hundreds of colorful and boisterous West Indians competing on national teams in the World Council of Domino Federations’ 15th World Championships.

From the Aloft, I transit to the Con at the nearby Irving Convention Center, a dramatic glass and copper-plated stacked structure that is LEED Silver certified. I find my table in the “prefunction area” with views to the outside, yet colliding alone as the only Star Wars guest at the Con. To my immediate right is the very gracious Ghostbuster, Ernie Gordon. At the corner just to my left is the Green [Power] Ranger, the dynamic Jason David Frank. I search the massing crowds for Star Wars fans -- thankfully, they begin to appear. A memorable young lady catches my eye. She would make Ashley Eckstein proud. Nicole Chadwick stands before my table costumed in an R2-D2 dress and silver cowboy boots. Speaking of her design, she says, “I figured there wouldn't be anyone else here with an outfit quite like it. It was fun to make and even more fun to see folks’ reactions, especially the little kids.” A stay-at-home mom, Nicole and her husband Scott are native Texans who live in nearby Flower Mound with four children under eight. Appropriately they named their eldest after Luke Skywalker. Nicole first saw Episode IV when she was nine. “I was one of those kids who watched it and walked away a totally different kid.”

As she moves over to Ernie’s table, I turn to gaze into a crowd of some two dozen assorted Rebels, Stormtroopers, and bounty hunters surging toward me, led by a determined figure dressed in the black uniform of a TIE fighter pilot. It’s the 501st, the North Texas Squad of the Star Garrison and the Dagobah Base of the Rebel Legion under the command of Squad Leader David Petty of nearby Bedford. To my very evident surprise, they are here to induct me into the Rebel Legion. After a very public ceremony at my table, they take me to their breakout room where they are fundraising for garrison member Megan Yenter’s friend Kari Giles, in treatment for Stage IV Hodgkin’s Lymphoma. The fundraiser is a “Blast-a-Stormtrooper” event where fully costumed members take a stance in the face of multiple rounds of Nerf Gun fire. The shooting raises $1,200 for Kari and is reported by the Dallas Morning News.

“Our main focus isn’t just to wear costumes that are extremely screen accurate,” Petty tells the reporter. “Our goal really is to raise money for charities, do hospital visits.” This year, his North Texas Squad has donated money, comic books, DVDs, toys, and games to such causes as the Texas Scottish Rite Hospital for Children, victims of the disaster in West, Texas, the Peter Mayhew Foundation, Texas Pythian Home, Texas Little Cuties Animal Rescue, Cook Children's Hospital and Geeks & Charity. “Making children smile,” says Petty. “That's what this group is all about, and I am proud to be part of it.” 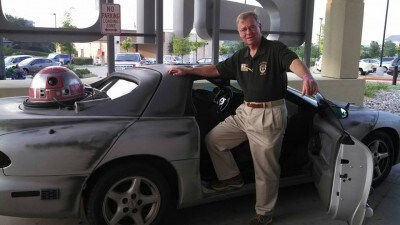 After I light off a couple of clips into three costumed targets, Rebel pilot Jason Davis interviews me for his podcast and invites me to join members for a restaurant dinner. That evening, Petty and his wife Camille arrive at the Aloft in their F-wing, a modified ’97 Firebird fitted with a laser cannon on each side, an R2 droid on the aft compartment and a GPS system voiced by Darth Vader himself. Off we fly to feast with the 501st.

At a long table, I caucus with D'on Noakes, a sector enforcement specialist with the Border Patrol based in Covington, Louisiana, who with several others from his unit participated in my induction. I share with him how for the last 15 years I’ve been consulting in homeland security. He and Petty then allow that the garrison has a hugely impressive roster of folks who have served and are serving country and community -- some 34 who are or have been military, EMTs, police, firefighters, etc. My honorary membership suddenly takes on new meaning. D’on e-mails me later to report another induction into the Rebel Legion. On May 25 at Houston’s Comicpalooza, he and Rebels from Dagobah Base and Kessel Base and Imperial members from the 501st Bast Alpha Garrison and Star Garrison inducted none other than Jett Lucas, son of George. 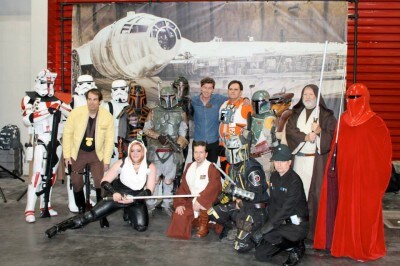 So, at the end of this month (June), I’m off to collide with another world at the BayouCon in Lake Charles, Louisiana. I’m one of two media celebrities attending. The other is Vic Mignogna, the voice actor and musician best known for voicing Japanese anime series and video games. I wonder how he and I will collude. D’on Noakes assures me the 501st will be there in Force. And you know what, Jen? I’ll be wearing my Rebel Legion badge.