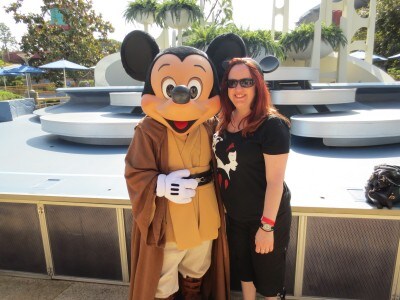 May was a very busy month for me, not least because of a couple of trips down to the Disney offices in southern California. Becoming part of Disney is as surreal an experience for me as initially joining Lucasfilm was, as both Disney and Star Wars are lifelong loves of mine. In fact, while I was down there, one of the HR people caught me eyeing the new Disney Princess merchandise twice. How embarrassing.

Disney and Star Wars is not such an odd combination, though, when you think about it. Star Wars is in many ways a fairy tale -- fairy tales are, after all, just different versions of myths. (As a kid I was obsessed with Greek mythology, too, so I’m definitely consistent!) These stories tap into something elemental, something cosmic. There’s a reason every culture has its stories that it tells over and over again. We’re all just trying to understand our place in the universe.

I was at Disneyland this weekend (breaking in that new Silver Pass!), and one of the things I love about Disneyland is that it’s a place where people who you just know would never think of themselves as geeks are not afraid to wear their geekiest Disney gear, even if they’d never wear the stuff in other venues. A huge percentage of people – of adults – walking around the park are sporting Disney regalia, whether it’s T-shirts, hoodies, hats, or of course the iconic Mickey Mouse ears. And they’re all smiling. They’re just happy to be sharing their joy of being there and of being a part of this big, joyous whole.

And there were also so many people wearing Star Wars shirts, or carrying Yoda or Chewbacca backpacks, or sporting R2-D2 mouse ears. And it’s not like that just started when Lucasfilm was acquired by Disney last year. The presence of Star Tours already makes that connection in people’s minds. I love that a Star Wars shirt is considered just as much of a way to share your joy at Disneyland as a Mickey Mouse one.

And that energy of happiness and pride and simple joy reminded me of someplace else...my first Star Wars Celebration last year. Where everyone was just glad to be among other people who share their love of great story, of myth-making that’s touched their hearts. And where they could wear Leia buns proudly no matter what they might dress like back at the office.

It’s all the same in the end. It isn’t about what company name is in the copyright line or on the legal documents. It’s about what we feel inside when we put on those Mickey ears or that Yoda backpack. It’s about finding joy, and sharing it with others. About making just a little progress in finding our place in the universe. So When You Wish Upon a Star...May the Force Be With You!