Bespin Boba reports back from the Cincinnati Comic Expo.

Bespin Boba (a.k.a. Dak) most recently joined two other Fetts, Daniel Logan and Dickey Beer, for another billed Boba Fett Reunion. Fans will recall the Fett tradition started at Celebration Europe II in Essen, Germany, that was capped by five Fett’s performing a Maori haka onstage with Warwick Davis before 7,000 ecstatic fans. This September's three-Fett reunion was during the 2014 Cincinnati Comic Expo at the Duke Energy Convention Center. The highpoint was a rollicking Reunion Panel before a full house on day three of the con, captured by an Expo video that the organizers have just posted on YouTube.

Followers of Jedi News may have read Dak’s report of the panel highlight: Dickey Beer’s reveal that Princess Leia literally saved his life during shooting of Return of the Jedi’s Sarlacc Pit battle scene.

Attendees -- and his fellow panelists -- were stunned to hear that Slave Leia laid on him the kiss of life…for real.

Featuring a host of Star Wars fans, the Cincinnati event was one of the most hospitable we’ve encountered. A welcoming spirit permeated the exhibit hall throughout the weekend. Outside the Duke Center, Downtown Cincinnati was in the midst of its Oktoberfest, and the nearby Fountain Square hosted a lot of Old World cosplay with Bavarian schuhplattler (slap dancing) and polka bands leading sing-a-longs of “Schnitzelbank.” Ja, a frothy gemütlichkeit was flowing through the Force.

Lifelong Cincinnatian and comics collector Andrew Satterfield founded the con in 2010 and is its director. His first Expo took place in the concourse of the Cintas Center at Xavier University. The following year, Satterfield moved it to the Duke Center. This year, he had worked with the 501st to create a Star Wars Zone complete with a Dewback. 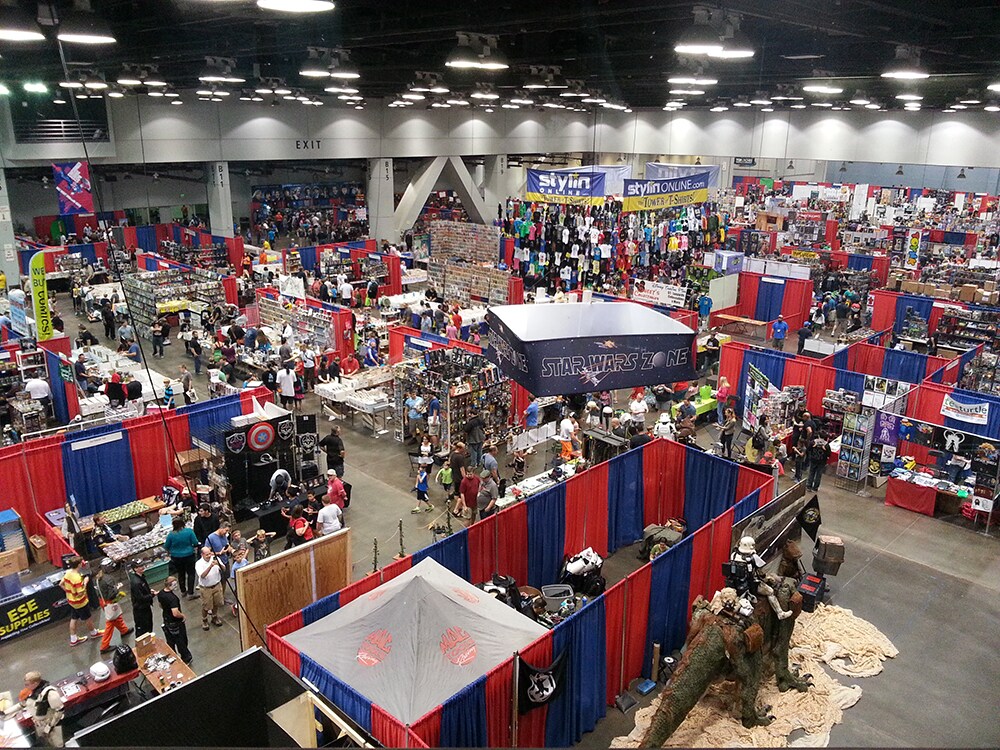 We three Fetts sat together in the Zone and were swamped by fans and innumerable Star Wars cosplayers. Note the land-line service adjacent to the Zone was little use to these two members of the Legion and 501st. ET isn’t the only one who can’t phone home. Ubiquitous at the con was Comic Book Central’s producer and host Joe Stuber who did a recorded interview of Dickey and Dak plus other con guests for his podcast. Dak’s daughter Emily snapped evidence of Daniel and Dickey with Ada, Ohio, video-gamer Courtney Walland. 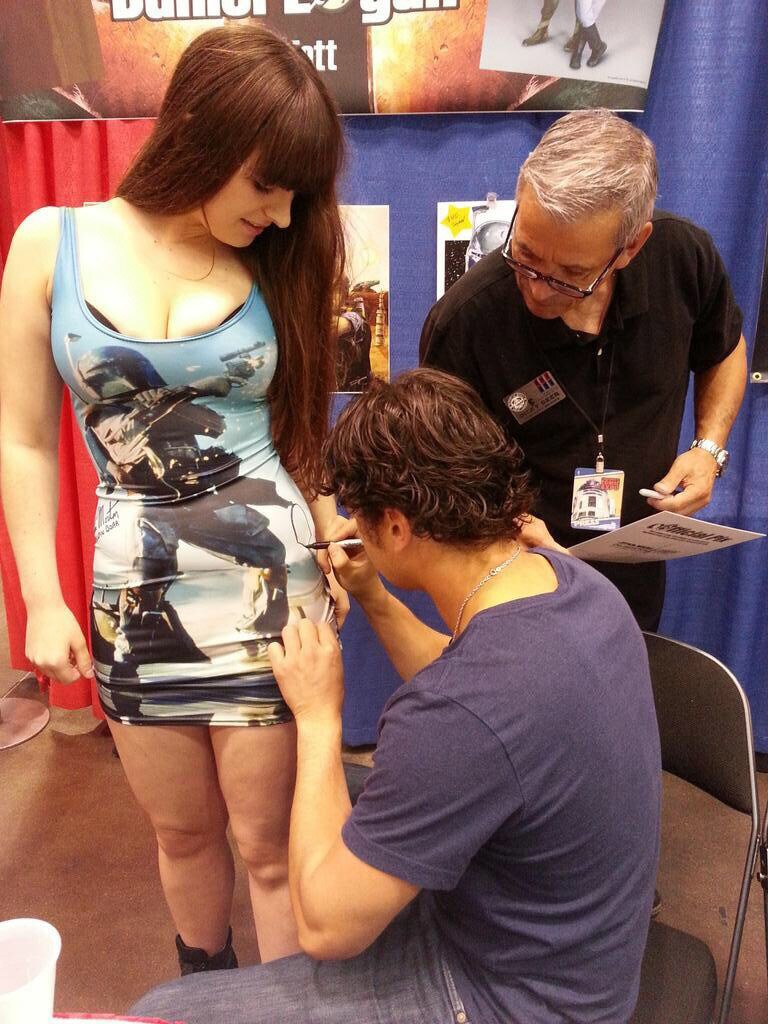 Indeed, Dak too was ever on the lookout for a uniquely catching interview. He couldn’t resist recording this shoulder tattoo below that captures the yin and yang aspects of the balance in the Force. 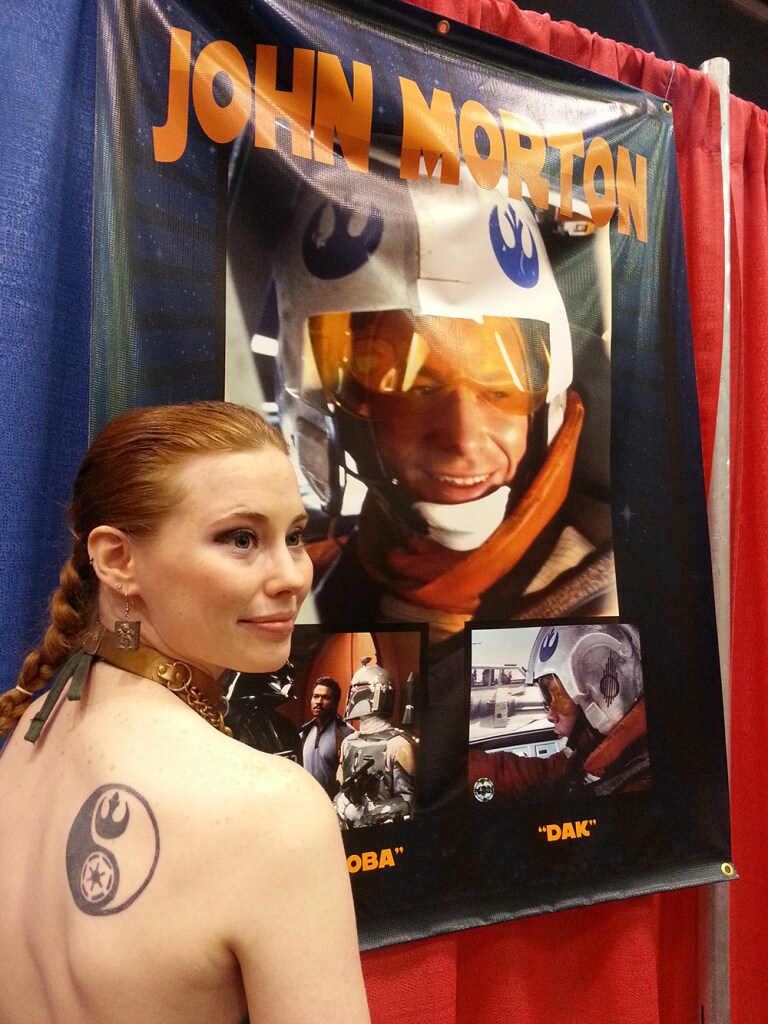 Here modeling is the 23-year-old Emily Hannon, a Slave Leia cosplayer who is by day an administrative assistant at Transamerica Financial Advisors. “When I'm not at work,” she told Dak, “I'm reading science fiction, playing video games, or studying to obtain my life insurance license at my home in Fairfield, Ohio.”  Emily attends comic and gaming conventions through the year with her fiance, Anthony Johnson. “We cosplay as Mandalorian Johan Kordav and Slave Leia, Brock and Misty from Pokemon, Hobbits from The LOTR [The Lord of the Rings], and aspire for more. I'm interested in creating custom Mandalorian armor to join my soon-to-be husband in the Mandalorian Mercs.”

The Mercs were very much in evidence at Cincy. Bespin Boba’s clan, the Blue Moon Clan of Kentucky, was there supporting their hosts, Ohio’s Rancor Clan. With them was with his fave Merc, the beasthunter Skanah Dala (Abbie Rich), who is here below sitting on her speed racer. These fantastically committed Mercs gave us Fetts a huge welcome. Their booth was next to the equally welcoming Shadow Squadron of the Great Lakes Base/Rebel Legion and the 501st Ohio Garrison.

At the far end of the hall, was a large area that housed the Ohio Kentucky Indiana LEGO User’s Group (OKI LUG), one of Satterfield’s partner organizations. Its founder and current president is Rodney Dicus, a Lego artist, by day a firefighter/paramedic who also serves as a fire chaplain. Like the Expo, OKI LUG dates from 2010. The group is based in Florence, Kentucky, just across the Ohio River from Cincinnati. Dak was particularly taken with one LEGO construct that returned him to the scene of his demise at Hoth. Folks came to Cincinnati from afar. One cute little Ewok who came to our table was there with her mom and hailed from Cartersville, Georgia, an hour northwest of Atlanta. Her dad, Chris Bern, was running a booth for an outfit called Fans for Christ. Bern, a pastor and sometime stormtrooper, is one of the founders and also the current director of the fan group that serves as a ministry for Christians who are fans of Star Wars, comics, anime, steampunk, and Goth culture, sci-fi, and fantasy. Membership includes folks that cosplay, do gaming and roleplay gaming and attend conventions, renaissance fairs and gatherings of the Society for Creative Anachronism (SCA) that recreates the arts and skills of pre-17th century Europe.

Further down the aisle was the Cinematic for the People (CFTP) booth that was featuring a locally produced DVD inspired by Star Wars called Star Odyssey. Founded in 1999 by Cincinnati radio DJ and videographer Jim Hanson and multimedia designer Mike Dellheim, CFTP is a home-made independent Internet-based television show and the riffing group. In 2003-06, Hanson and Dellheim kept the group going as a webcomic, before returning to video production.

Across the way was the Cincinnati Geek Meet table, hosted by cosplayers Karen and Peter. They are the ringleaders of a geek-oriented social club that numbers in the hundreds. The group is “about all things geek” and includes writers, artists, gamers, movie fans, cosplayers and musicians. The group was a testament to alternative Cincinnati scene that is a vibrant and creative corner of the Galaxy.

In sum, we Mandalorians had a most entertaining trip to Bountiful. And we’re next scheduled to reconvene on November 7-9 at the Shatterdome Con near Dulles Airport in Northern Virginia.