Timothy Zahn's landmark 1991 book kickstarted the Expanded Universe and launched a massive Star Wars publishing program. But how does it hold up? 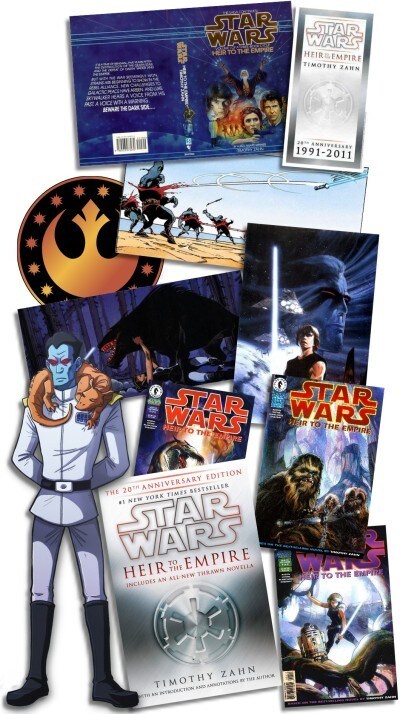 As we move into the next era of Star Wars, easing from the end of The Clone Wars toward Star Wars Rebels and Episode VII, it's an opportune time to take a look back over two decades to a landmark 1991 release that led us out of The Dark Times. Star Wars: Heir to the Empire by Timothy Zahn brought us into a decade that produced Star Wars Galaxy Magazine, Star Wars Insider, Shadows of the Empire, the Star Wars Trilogy Special Edition, and The Phantom Menace. It jumpstarted a publishing program that endures to this day and formalized the Expanded Universe -- stories set outside of the canon established by the films and TV shows of George Lucas that make the galaxy deeper and richer.

Nobody expected Heir to the Empire to be the massive hit that it was, making the New York Times bestsellers list and pulling together Expanded Universe elements present in West End Games D6 releases as well as other pre-existing information and giving us such characters as Mara Jade, Talon Karrde, Grand Admiral Thrawn, and Gilad Pellaeon. It christened the capital world of the Republic giving it the name Coruscant and would prove to be influential, much-loved, and ground breaking. But how has the novel aged? Here's a series of reviews written over the past decade and a half that focus on the original release as well as the 20th anniversary edition released in September 2011. 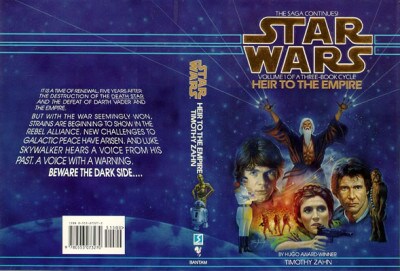 Back in the day the Shaven Wookiee was one of a number of go-to sites, many of which no longer exist, and they weighed in on the release in an intriguing manner. Reviewed in 2006, they pointed out the parallels between the book's main characters and their Marvel Comics counterparts; it's connection that many people these days wouldn't make as the Marvel releases fade into the rear view mirror.

"One thing that strikes the long-time Star Wars fan about this book is that while it does not follow on from the Marvel stories, there are obvious similarities to it. Zahn's Noghri race have some superficial similarities to Marvel's Nagai, but Zahn's character Mara Jade is an almost blatant steal from Marvel's Shira Brie. The reason most Star Wars fans feel that Mara is Luke Skywalker's perfect love interest is no doubt because of the many similarities the character has with Shira."

And the review makes it very clear just how highly it regards the novel and its standing in the wider Star Wars story.

"Zahn is a damn fine novelist, and it has to be said that Heir to the Empire is a worthy continuation of the Star Wars saga."

About.com's Amelia Hill focuses her review on the Bantam years, which lasted 8 years and encompassed 38 novels and short story collections.

"The Thrawn Trilogy established an ongoing plot for the Bantam era of Star Wars novels. True, the Emperor and his Death Star were destroyed at the Battle of Endor -- but his underlings still remained, and the Rebel Alliance was still a small, relatively weak force. The New Republic was a struggling government that faced threats from the Imperial Remnant and independent warlords. This ongoing plot maintained the momentum of the Star Wars films by shifting the central conflict -- the struggle between Jedi and Sith -- to a more widespread political struggle. In retrospect, this parallels the prequel trilogy, which explores the political issues in the Republic and how they allowed the Sith to thrive."

An astute observation, pointing out that the Star Wars story is about far more than just the battle of Jedi versus Sith and the saga of the Skywalker family, but folds in political machinations and more personal journeys.

John Lawson of the Fairfax County Public Library, writing for The School Library Journal, took a slightly different view. While he clearly enjoyed the book he they felt it was more suited to young adult readers.

"It's great fun to romp with the Star Wars cast of humans, droids, and aliens again. While it is not on a par with Zahn's creative, powerful works such as Cascade Point (Baen, 1987), Heir is well written for what it is. Recommended for YA collections needing a Star Wars fix." 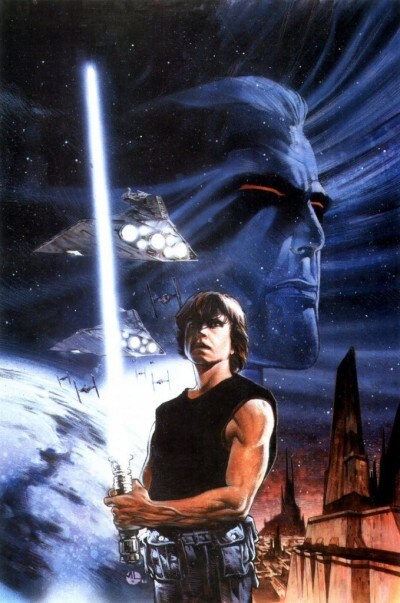 Here in the UK at Lightsabre, Jonathan Hicks took a very different view, pointing out in his typically acerbic manner what he felt were the shortcomings in the novel and its method of bringing Star Wars back to the masses in this 2000 review.

"The Force is the ultimate power in the universe. Darth Vader himself said something about 'The ability to destroy a planet is insignificant next to the power of the Force.' It appears, however, that if you drape a lizard about your shoulders then you're rendered immune to the effects of the Force. The ysalamir are a species that 'naturally push back' the Force. So, in effect, what Zahn has done is lower the importance of the power of the Jedi's. It's like having a headache. A totally unnecessary addition to the book, which also debases the Force, which, at the end of the day, saved the galaxy."

He also bemoaned the relatively sparse usage of the droids in the novel, a decision Jonathan felt short-changed two of the key characters in the entire saga.

"Then there was the lack of use as far as the 'droids, R2-D2 and C-3PO are concerned. Pivotal characters in the movies now reduced to mere servitude. In the films they had started the whole thing over Tatooine, been important in The Empire Strikes Back and even helped save Han Solo in Return of the Jedi. A waste of two very good characters."

Not finished, he made reference to the habit of characters harkening back to events we the readers were intimately familiar with from the three movies.

"And then there were the continuous references to the Star Wars movies. Little snippets, little remembrances of dialogue and conversation. The characters Zahn's book would be thinking of themselves or their friends and these thoughts would always lead into a quote from one of the movies. One of the worst moments is when there is a reference to a committee, and Leia says to Han, with a wry smile as if this is a continuing joke in their lives based on a throwaway line from The Empire Strikes Back, 'I am not a committee'. What was the point? I thought we were reading about the further adventures, not the continuous flashbacks." 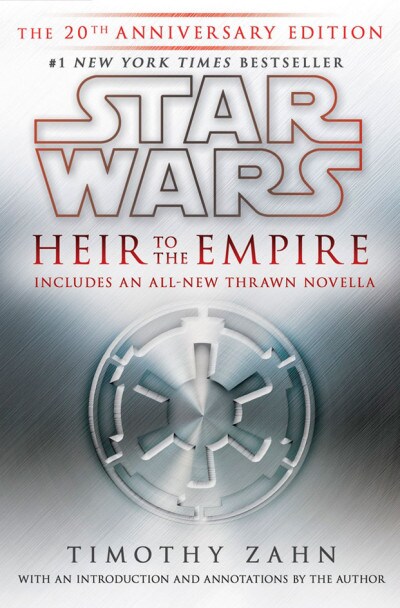 We hop forward to 2011 and the release of the Heir to the Empire anniversary edition. Nick Sharp in the SF Signal took a look at the release, reading the book for the first time and making some points that earlier reviews wouldn't have thought to make, given the lens that two decades allows.

"Zahn’s greatest strength is in translating everyone’s favorite movie characters into text. As I read the dialogue I could hear the actors’ voices and picture their mannerisms. Zahn is especially deft at writing Han Solo’s roguish wit, Lando Calrissian’s charm, C-3PO’s neurotic twittering, and (surprisingly) R2-D2's beeping and chirping. Han and Lando really steal the show, it is great fun to see them operating as partners."

TV Tropes took a unique approach to the novel and some of its successors, listing the tropes that it gave to the Star Wars galaxy and noting in a now redundant manner that 'many fans consider them to be the honorary Episodes VII, VIII and IX.'

Barnes and Noble took a deeper look at the novel in 2011, heralding its place in the Star Wars firmament as 'The biggest event in the history of Star Wars books.'

"Star Wars fortunes soared with the May 1991 publication of Timothy Zahn's Heir to the Empire, the first volume of an eponymous trilogy sequel to the events of Return of the Jedi. This collectible hardcover contains numerous new features, including an introduction and annotations by author Zahn; exclusive commentary from Lucasfilm and Del Rey books; and, not least, a new novella featuring Grand Admiral Thrawn himself. One of the most exciting Star Wars epics of all."

As we sit at the cusp of a new era in Star Wars and in the publishing program that accompanies it, it's intriguing to look back and see just what a key moment in Star Wars history Heir to the Empire was and where it sits in the affections of Star Wars fans worldwide. It's a unique time that might never be repeated, but it will always be remembered.