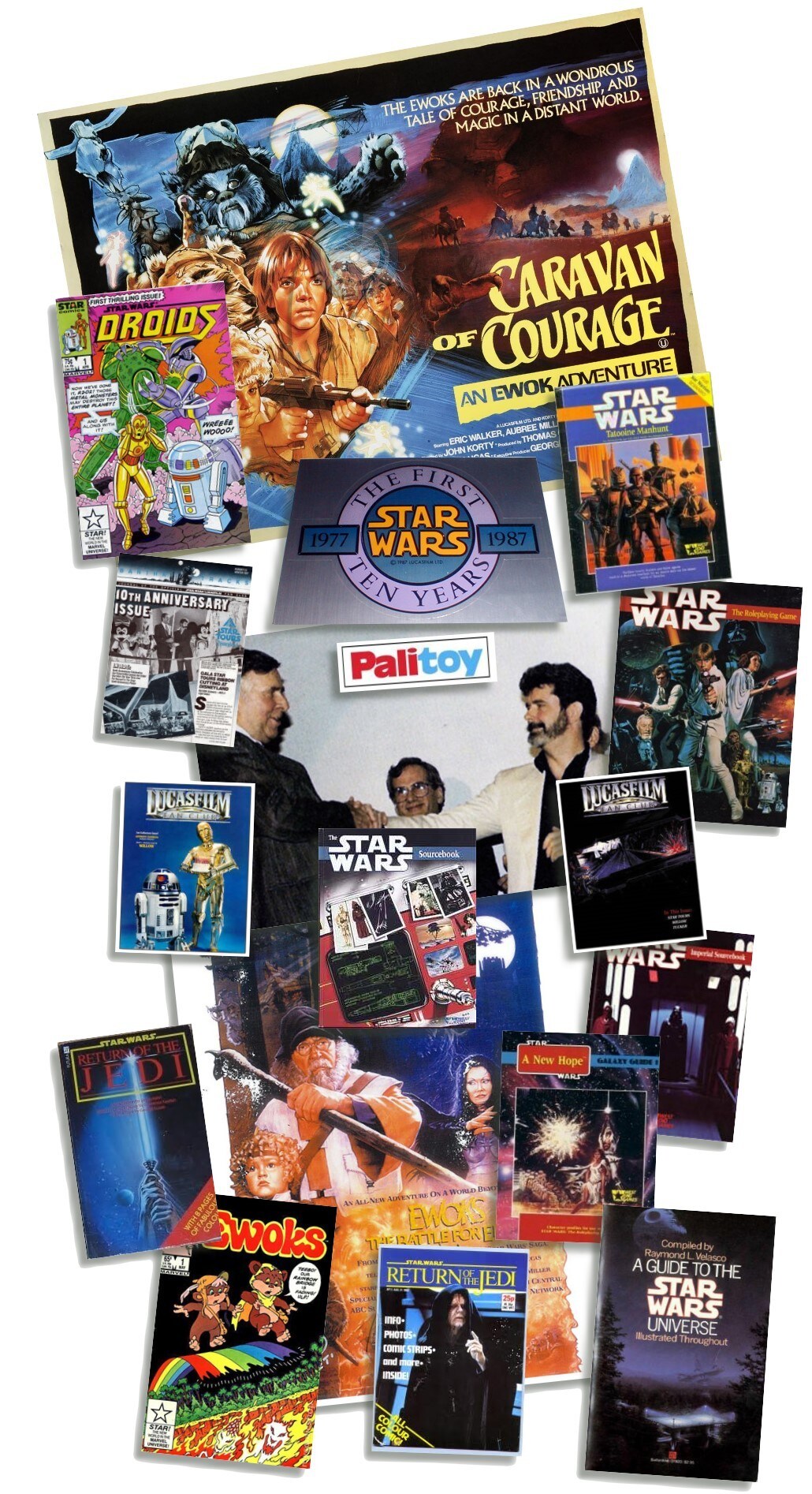 The year was 1983. Return of the Jedi had been released to great fanfare on 25th May, breaking opening day records worldwide and bringing the original trilogy to a conclusion with a blast, resolving -- for the next 32 years, at least -- the fates of Luke, Leia, Han, Chewie, and the droids. As it had been for the previous six years, Star Wars was everywhere. But little did fans know, we were just a handful of years away from an era of Star Wars history known as The Dark Times.

But before those grim days there was plenty to enjoy. Over the summer and autumn of 1983 Lando Calrissian starred in a trio of novels, in 1984 the first edition of A Guide to the Star Wars Universe by Raymond L. Velasco was released, and the first Ewok adventure Caravan of Courage arrived in UK cinemas, keeping the GFFA alive for fans young and old. A sequel, The Battle For Endor, followed in 1985, released here in the UK by MGM Home Video, while on BBC1 we were treated to two animated series: one season of Droids featuring Anthony Daniels and two seasons of Ewoks. Meanwhile Marvel UK's Return of the Jedi weekly continued, joined by Ewoks and Droids specials and in 1986 CBS Fox released Jedi into the video rental market. Star Wars was as strong as ever.

And yet all was not as secure as it appeared. Palitoy had released its final Star Wars product and supermarkets and toy shops were selling figures, sets, and vehicles off for pennies. Sphere and Futura had printed their final Star Wars novels, Return of the Jedi weekly had been cancelled and Star Wars was relegated to a backup strip in Spider-Man and Zoids. Even the staple of Star Wars fandom, the much-loved Bantha Tracks (distributed in the UK from a base in Surrey) was retired to make way for the official Lucasfilm magazine in 1987 which focused on broader LFL projects. Star Wars was being slowly phased out.

In the States, Marvel allowed the license to lapse  while on the toy front, Palitoy closed its doors for the final time -- a hammer blow to the childhoods of thousands of UK youngsters -- while Lucasfilm focused on other projects via ILM, LucasArts, the Graphics Group, and a certain adventurous archaeologist. It seemed increasingly likely that Star Wars was a thing of the past, a golden memory from younger days that would never be revisited. The galaxy was hibernating.

However there were chinks of light in these Dark Times. In 1987 George Lucas opened the first Star Tours and celebrated the 10th anniversary at the first official Star Wars convention in LA. West End Games released Star Wars: The Roleplaying Game, starting a run of books, scenarios, sourcebooks, and releases that would survive well into the revival era of the '90s. It wasn't much, and outside of the RPG community the books were hard to find, but for hardcore fans still passionate about the saga it was akin to doing the Kessel Run in 11 parsecs. Much of what later formed the backbone of the Expanded Universe was forged here by Bill Slavicsek and his writing team, inspiring fans worldwide but for the later half of the '80s it was as if Star Wars fandom had been frozen in carbonite.

And it remained that way until 1991, when all of that changed. Two landmark releases would open a torrent of product that reactivated the saga and pointed an arrow to the future: the novel Heir to the Empire and the comic Dark Empire. Marvel was famously given first dibs on Dark Empire but turned it down, allowing Dark Horse to swoop in and take on the six-part series, serialized in the UK by Titan and featuring fellow Dark Horse title Indiana Jones in backup strip capacity. Over at Bantam, Heir to the Empire had been released in May 1991 to test the waters and see if interest was still there in the saga. The blockbuster success of both ventures would light a fire under Lucasfilm and fandom, but that's a tale for another day...

Star Wars star wars in the uk the dark times heir to the empire uk star wars Star Wars: Return of the Jedi