Lando's loyal droid, and a few new friends, have a (somewhat) friendly chat with Threepio.

Earlier this year, StarWars.com announced From a Certain Point of View: The Empire Strikes Back, a new anthology celebrating 40 years of Star Wars: The Empire Strikes Back. Arriving November 10, the book collects 40 stories by 40 authors reimagining the classic sequel through the eyes of background characters -- heroes, villains, droids and creatures. Including some welcome returns.

In StarWars.com's exclusive excerpt of Brittany N. Williams' "Faith in an Old Friend," we flashback to the Millennium Falcon's desperate journey following the Battle of Hoth, as Han Solo, Leia Organa, and friends look to escape the Empire's clutches. Except here, we're reintroduced to L3-37, Lando Calrissian's rebellious droid. Now one with the Falcon's central computer, L3-37 is as spirited as ever -- and we wouldn't want it any other way.

"I'm probably one of many people who read Last Shot and watched Solo and fell in love with L3-37," Williams tells StarWars.com. "She has this great design, she's hilarious and dynamic, she and Lando had this amazing rapport, and then, Kessel happened. Like, I think about L3-37 every time I see the Millennium Falcon now. So when I got the invite to write a story for From a Certain Point of View, it's like here's the perfect opportunity to make sure that our girl is alright and give her another moment with Lando. And I couldn't really pass that up."

In addition, StarWars.com caught up with editor Tom Hoeler to talk about putting together such an ambitious project, and how From a Certain Point of View: The Empire Strikes Back supports a good cause.

StarWars.com: How does the role of editor on an anthology like From a Certain Point of View differ from working on a traditional novel?

Thomas Hoeler: It is similar, just more so. Editing an anthology is a much bigger challenge than focusing on a single book. Anytime you begin a book project by opening a spreadsheet, you know you are in a bit of trouble! Coordinating 40 different stories, contracts, email chains, edit passes, etc. could easily become overwhelming. Luckily, we have an amazing team across Del Rey and Lucasfilm to keep it all organized. But it is so much fun and so rewarding, I frequently call it “the best bad idea we’ve ever had.”

StarWars.com: How did the selection of characters to include in this book come about?

Thomas Hoeler: When asked, we always are happy to make a recommendation or provide some options, but the selections really all come from the authors own concepts and ideas. And the best part is, try as you might to guess which characters might be chosen, the end results always have unexpected and exciting choices. CB Lee has a story about the guy holding a crate, walking between Han/Leia’s Hoth hallway argument? Tracy Deonn writing about the cave on Dagobah? John Jackson Miller revisiting RAE SLOANE?

StarWars.com: Was there any attempt to link some of the stories together?

Thomas Hoeler: Most important is that the voice and writing styles of individual authors shine through. So we don’t mandate a ton of connections unless it was needed to retain the cohesion of the film’s story. Regardless, so many authors jumped at the chance to have tie-ins both big and small to each other. For example, Seth Dickinson and John Jackson Miller’s stories intertwine in some crucial ways. And of course, you can’t have stories about all the bounty hunters without some connections. Beyond those examples, keen readers will find Easter eggs to Star Wars stories past and present sprinkled throughout the anthology.

StarWars.com: What are some of the highlights from working on a project like this?

Thomas Hoeler: Easily getting to share in the excitement of the community of authors and Star Wars fans. Having these social media hangouts to reveal contributors and stories and seeing the conversations across the fandom. Especially at a time when we’ve been separated from each other, or forced to miss out on great community gatherings like conventions. It is just wonderful to build positive community moments together, celebrate what Star Wars has meant to so many different generations, and explore the possibilities for Star Wars storytelling in the future.

StarWars.com: Tell us about First Book and how this book will benefit them.

Thomas Hoeler: First Book is a fantastic organization whose mission is to provide equal access to quality education. It was fantastic to once again support this amazing organization with the second anthology. In honor of the project, Penguin Random House has donated $100,000 to First Book, and Disney/Lucasfilm has donated 100,000 children’s books. But the real stars are the authors who all generously donated their time, energy, and all their proceeds from the anthology to First Book. You can read more about this amazing organization on their website, firstbook.org.

Faith in an Old Friend by Brittany N. Williams -- From a Certain Point of View: The Empire Strikes Back

"Chewie, take the professor in the back and plug him into the hy­perdrive.”

The Millennium Falcon’s computer watched Chewbacca drag the complaining C-3PO out of the cockpit and into the body of the ship. The audio sensors picked up the protocol droid’s rambling tirade but felt no need to follow the two on the cams.

Search results: Professor, chirped ED-4, a classification for a sen­tient being or droid who provides a high level of education. Updating vocabulary.

Still true, though. L3-37 would’ve shrugged here if it had been the old days. The days before she’d been uploaded to the Falcon and had become one of the three droid brains that made up the ship’s computer.

She’d built herself such good shoulders, too.

The ship rocked hard, sensors bleating then going silent as every­thing aboard the Falcon jostled back and forth. The Millennium Collective— as L3-37 had named their trio of consciousnesses—got to work. ED-4 scanned the exterior sensors while V5-T checked the interior systems and L3-37 cycled through all the cams and audio.

“I told you this asteroid was unstable,” the droid wailed, “but no one ever listens to—”

No further exterior damage detected, ED-4 said. Although the rear sensors are very—chatty.

L3-37 felt ED-4’s excitement at utilizing the new word but L3-37’s own confusion pushed itself forward. Chatty about what?

The Collective shifted to the cam, bringing up the visual. Han held the woman, Leia, in his arms. L3-37 suspected what this meant. She remembered how Lando’s heart rate would change whenever they were in close proximity. Something like sadness shoved against her awareness.

Is this organic courtship? ED-4 said as they tuned in to the cock­pit’s audio.

The Collective listened, and L3-37 was grateful for the distraction. That feeling reached ED-4, who sent a gentle nudge back.

L3-37 no longer had the body she’d spent so long building or the human partner she’d bonded with so deeply. But she wasn’t alone, and for that she was thankful.

“Captain, being held by you isn’t quite enough to get me excited,” Leia hissed.

Han pushed her to her feet. “Sorry, sweetheart. I haven’t got time for anything else.”

The Collective laughed, something they’d only learned to do when L3-37 had joined them. Before, they’d been a singular consciousness unconcerned with what they may have once been. But L3-37 had brought the knowledge that a whole could be made up of three indi­vidual parts without weakening.

She’d refused to lose her own name and had made sure the others had theirs, too. V5-T was a transport droid, the type put on all YT-1300 light freighters and the first of them to be here. ED-4 had been a corporate espionage slicer droid who’d been uploaded to the Falcon before L3-37 and Lando had ever laid eyes on the ship.

And L3-37, she’d been a droid unparalleled, part astromech, part espionage droid, part protocol droid, and all of what she’d built her­self to become.

Before she’d been shot to hell in that job on Kessel . . .

Right. Got it, L3-37 said as the Collective honed in on the protocol droid’s location. What do you want?

Exactly. I am only trying—

But this is the one who is too chatty, ED-4 said, yes?

I beg your pardon! C-3PO gasped.

What is—this is ridiculous. I am trying to speak to the central com­puter of the Millennium Falcon.

Which one of you—

Yeah, you’re speaking to the Millennium Collective. What do you need?

I must say, this is the oddest conversation I’ve had in Binary—

Oh—well, if this is indeed the central computer for the Millennium Falcon—

It is, the Collective said in a chorus of voices.

C-3PO huffed but continued. I’ve been asked to inquire as to the state of this ship’s hyperdrive.

Should’ve just said that in the first place, L3-37 said. Tell the flyboy—

THE POWER COUPLING IS BROKEN.

—he needs to learn to do better repairs—

—but yeah, it’s been pulverized. Tell him to stop being cheap and replace it. Got all that?

A long stretch of confused silence as the protocol droid tried to piece together the Collective’s assessment. C-3PO’s presence disap­peared as he unplugged from the system.

Finally, the audio sensors picked up an exasperated huff.

“Where is Artoo when I need him?”

L3-37 thought of the astromech droid who’d occasionally plug in for a chat. She actually liked him.

The Collective tuned in to the nearest cams, watching as Han strode into the room.

“I’m not sure where your ship learned to communicate but it has the most peculiar dialect.” 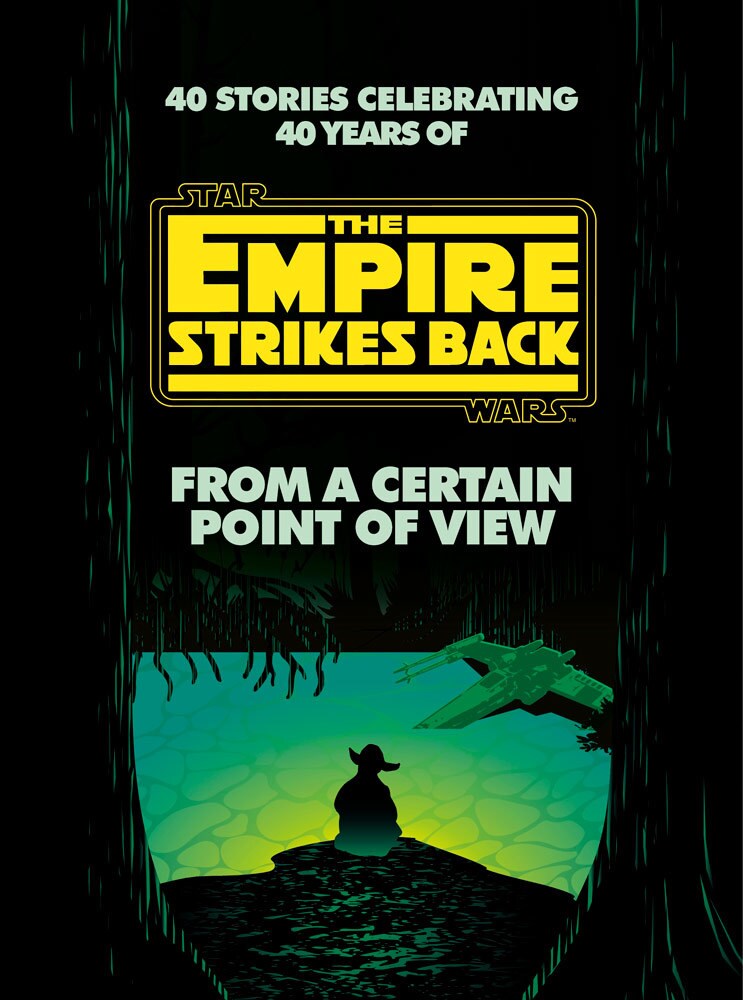 From a Certain Point of View: The Empire Strikes Back arrives November 10 and is available for pre-order now.

Interviews Star Wars Books Empire at 40 From a Certain Point of View: The Empire Strikes Back L3-37