Author Jack Mitchell shares his insights on the ambitious retelling in the style of Homeric epic poetry with the meter of Milton. 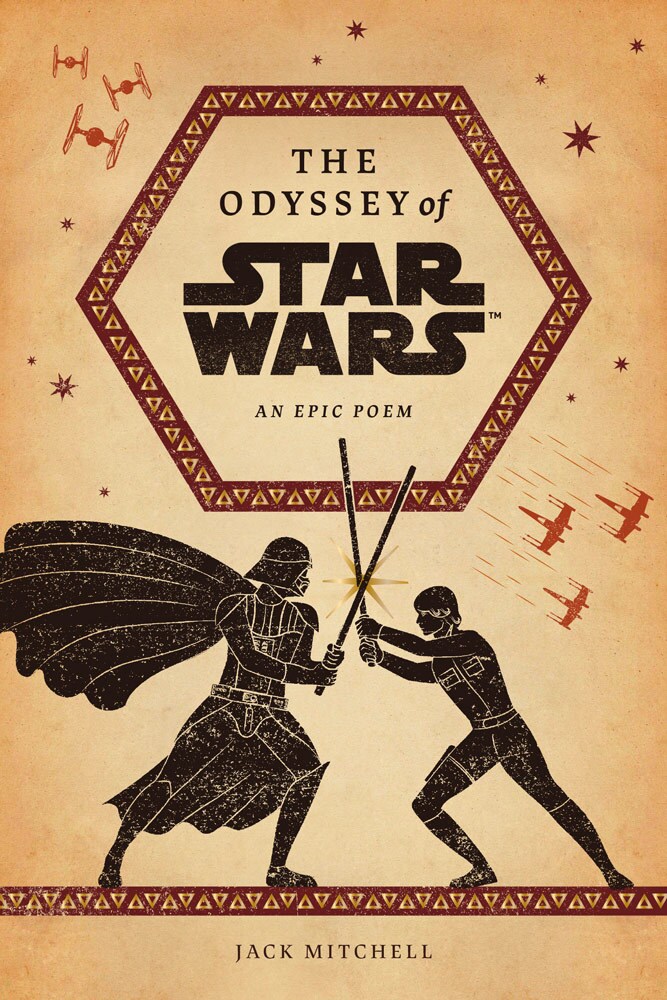 For more than 40 years, Star Wars has been passed down from generation to generation, a modern myth that explores powerful themes of good versus evil, familial ties, and the presence of the Force. And just as creator George Lucas took inspiration from ancient archetypes, author Jack Mitchell has woven his own retelling of Luke Skywalker and the struggle for the galaxy in the soothing structure of unrhymed iambic pentameter, the meter of Milton.

A Stanford-educated poet and scholar by day, teaching the classics at Dalhousie University near his home in Halifax, Nova Scotia, Mitchell's affinity for Star Wars grew out of another author's interpretation, a children's book read aloud to his then four- and six-year-olds at bedtime. "I had always been a kind of Star Wars fan, maybe six out of 10 on a scale of devotion. I could quote lines, but I wasn't a real scholar," Mitchell tells StarWars.com. "But when I started reading to the kids and they responded so eagerly, I thought to myself, 'Well, here I am actually transmitting a myth, which is what I read about in my work all the time. This is actually the continuity of our culture happening in real time.' And then during the process of reading that book, maybe for the tenth time to them, I thought to myself, 'Why don't I just try and see whether this myth would work in a purely poetic, Homeric form?'" Mitchell penned about 10 or 20 lines in the style that night, which became the basis for the opening lines of his new book, The Odyssey of Star Wars. "Once I realized I was really enjoying every step of it, then I just kind of pushed on forward."

The resulting epic poem took Mitchell two years to draft, plus another year and a half of revisions and polishing. Through it all, his children remained an important sounding board. "I immediately began reading it to them sort of as it was being composed and they were keen for more, to the point where they demanded more if I hadn't produced enough on time," he says with a laugh.

Mitchell's approach is steeped in his professional knowledge, a deep affinity for the ancient world and the stories that were passed down among Greek and Roman scholars, poets, and storytellers initially through the spoken word. "In some cultures, we see kind of a professionalization that takes place and that seems to have taken place in Greece with the Homeric poetry, which probably started out as just myths told around the fireside. As the Greeks got richer and they could afford blacksmiths and shipwrights, they could also afford professional storytellers,” Mitchell says. “So these storytellers would have competitions to see who could tell the best version, and out of that long, difficult process came the poems that we know today, The Iliad and The Odyssey. We have maybe the very best versions of that, but there’s a whole galaxy of storytelling that went into it.” Far be it from Mitchell to put himself in the same league as Homer or Vergil — or Lucas, for that matter — but he hopes his unique perspective will do justice to the source material and his inspiration. “I’d like to think that I’m making poetic verse storytelling something that we can access in English instead of having to go to all the trouble of learning ancient Greek and Latin,” he says. “With changes in technology, we’ve started telling our epic stories in grand epic films and novels and so forth. I wanted to show that it was possible to seize the mythology that we love today and do it in the ancient style.”

Plight of the Duros

Mitchell’s book is easily accessible to more casual Star Wars fans, but he’s taken great care to pepper in references that will evoke specific images in the minds of the most devoted fans. In a passage that sees the heroes drawn into the Death Star’s embrace, he employs simile and allusion to eloquently compare Obi-Wan Kenobi’s astonishment over the destruction of Alderaan to an aging Duros hauling groceries; he transports us back to Mustafar, the site of Kenobi’s fateful duel with Anakin Skywalker, with the name of the planet alone. “The basic artistic purpose of latching onto a well-known myth like Star Wars was to allow the poetry to function on the level of allusion,” Mitchell says. “That way I could deploy a word like ‘Mustafar,’ and that has a whole resonance: it takes just three syllables, and suddenly you’re in the climax of Revenge of the Sith. But to have allusion function like that, the mythology has to be known in advance. That’s [something] I take away from my study of ancient epic: just how often these stories were retold. Someone listening to Homer in the ancient world would already know all about Achilles and Odysseus before hearing the poem, because they’d have heard the story so often before.”

Many readers will have not only seen the films over and over again, but they'll be able to quote many of the most famous lines from the original Star Wars trilogy. That familiarity posed another challenge for the author. “I wouldn’t dream of aiming to replace the actual script.  In fact, I’m counting on the dedicated fans to know the film dialogue so well that they can appreciate the deliberate departures and variations,” Mitchell says. “The more readers are familiar with the films, the more allusions they’ll pick up on and, I hope, enjoy.”

In Mitchell’s hands some quotes are omitted while other lines are expanded in verse. “I can’t just use the lines of dialog from the film, I have to kind of milk it a bit,” he says. “And so a line or two in the script will become a six-line speech. It’s the sort of adaptation you would get in a painting: you might include some elements which are not present on the screen, because the different art forms sometimes call for different elements.”

Mitchell always keeps the spectrum of fans in mind, from the die-hard aficionados to the children just learning about Luke Skywalker’s lineage for the first time themselves. “I had to walk a fine line between making it only accessible to hardcore fans and making it available to regular Star Wars readers, including younger readers, listeners, and fans. There’s a lot of young Star Wars fans! They may have seen everything, but they haven’t necessarily internalized every reference.” But like an ancient poem, evolving the story is part of the process of collaborating with the storytellers who have come before him. “It’s a very, very small part, but it’s a pleasure to feel that I’m part of an evolving world.”

Mitchell’s story covers the climax of Rogue One, the theft of the Death Star plans, to the end of Return of the Jedi. “I think my favorite scene to tackle was the scene when Vader’s true identity is revealed,” Mitchell notes, hesitant to say more because, well, spoilers! “It was such a huge challenge because it’s so famous, so much going on in terms of dialog, in terms of the of the imagery, the cut and thrust of battle,” he adds.

Today, StarWars.com has pages from another pivotal scene: the Millennium Falcon‘s arrival on the Death Star. The passage includes a nod to Homer’s penchant for pausing mid-scene to list off the names of sea nymphs or Bronze Age cities, this time rattling off a few notable Jedi lost to the Sith and Order 66, including Qui-Gon Jinn and Plo Koon.

And, with a final line that provides a fresh take on the iconic sound of Darth Vader’s labored breathing, it’s sure to leave readers wanting more… 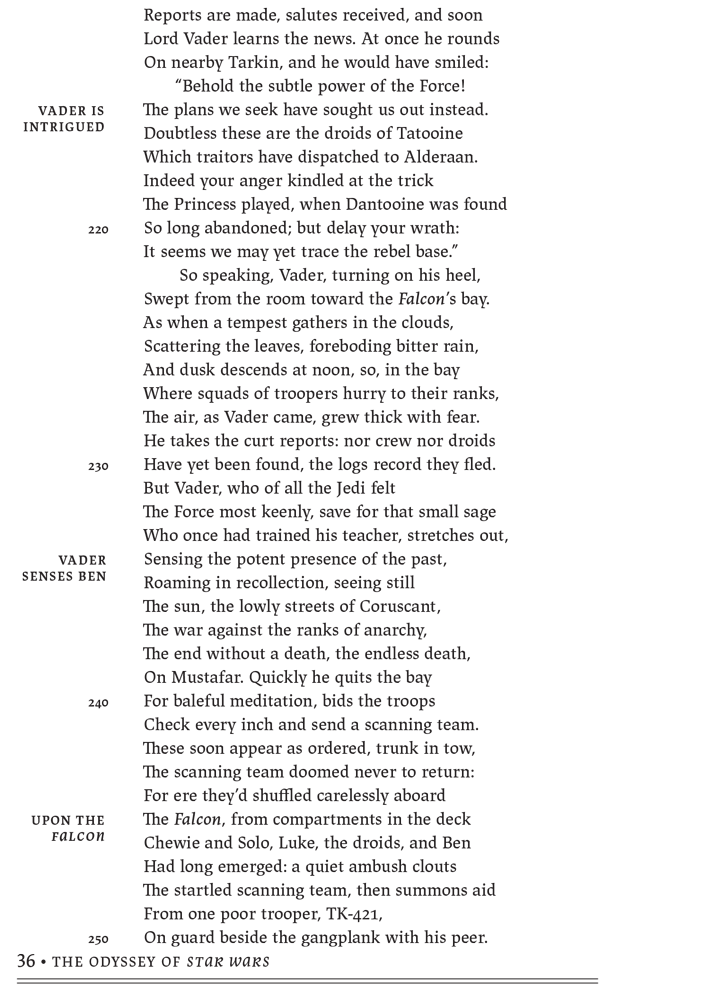 The Odyssey of Star Wars: An Epic Poem is available now.