3 Reasons You Want C-3PO on Your Squad in the New Star Wars: Galaxy of Heroes Legendary Event

It’s against his programming to impersonate a deity, but the ever-helpful droid will gladly assist you in matters of protocol and combat planning.

They may not serve his kind, but this week C-3PO has finally made his way into the cantina inside Star Wars: Galaxy of Heroes, as part of the latest legendary event.

The goldenrod faux god programmed for human/cyborg relations can only be unlocked by leveling up your Ewok squad. As we’ve seen before, C-3PO isn’t much for combat even when he’s been spliced together with a battle droid, but his knowledge of protocol and fluency in over 6 million forms of communication comes in handy while traversing the galaxy. StarWars.com recently spoke with Kyle Powell, game designer at Capital Games, to discuss bringing the metal-bodied mindless philosopher to life in the mobile game and to teach you why it’s always helpful to have a protocol droid on your side.

C-3PO seems to have been made to suffer. It’s his lot in life. And no matter how often he’s rescued from the brink, pieced back together, or altogether evades getting into any real trouble in the first place, he always finds the time (and power reserves) to complain. “Whether he’s dodging blaster fire in the Petranaki arena or wandering the endless sands of Tatooine, C-3PO somehow manages to narrowly escape trouble and still find time to grumble about it,” says Powell. In the game, Threepio’s evasive abilities make it difficult for the opposition to target him, which comes in handy. And the very talkative droid also serves as a translator. “Translation is a unique buff that C-3PO uses to support the Rebels, Resistance, Ewok, and Galactic Republic factions. The more he can translate for them, the stronger the bonuses get!”

Finally, a tactical use for C-3PO’s more fretful side. “ Our testing process uncovered that C-3PO enables many unexpected squads and allows for a lot of mixed-faction experimentation,” says Powell, accomplished through the abilities “Intermediary,” “Cyborg Relations,” and “Fretful Mediator.” “Each of these provide a different bonus to Rebels, Resistance, and the Galactic Republic -- and Ewoks, of course, gain all of these bonuses. Yub nub!” 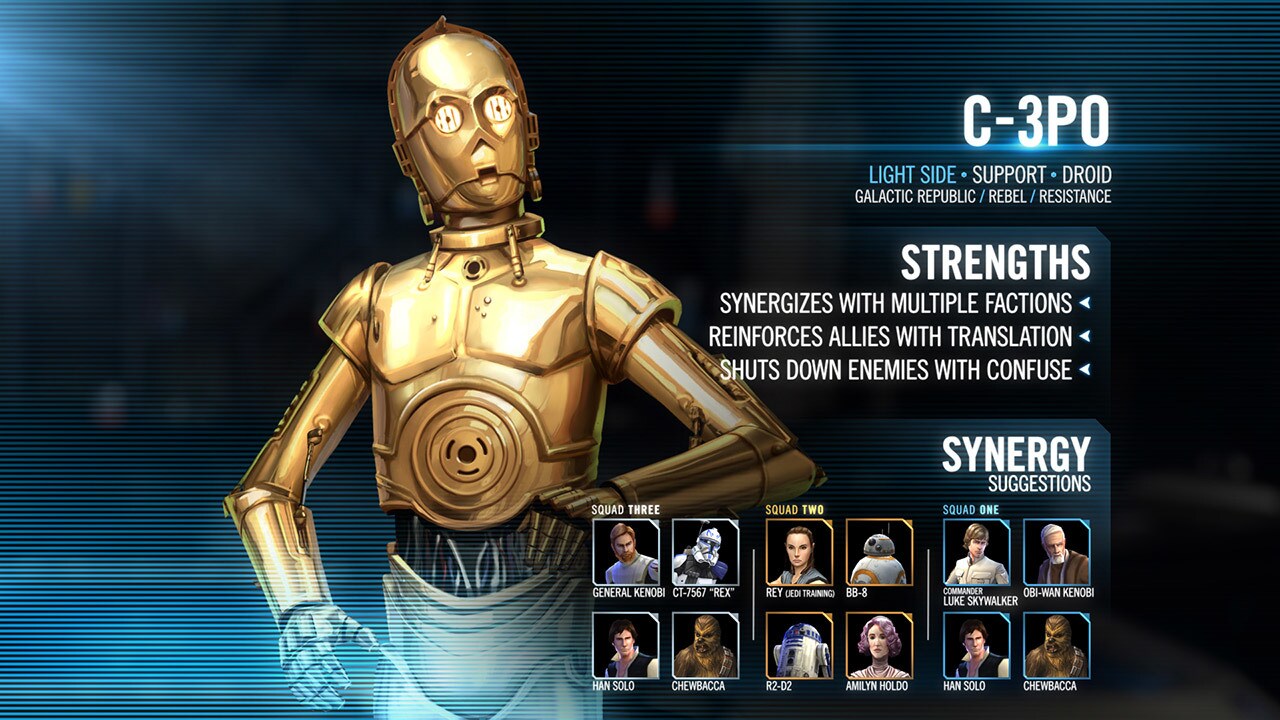 3. C-3PO isn’t much for combat, but his incessant babbling has been known to spark a fight. From time to time.

Since C-3PO is a non-combatant in Star Wars: Galaxy of Heroes, the character doesn’t deal damage directly and he will retreat from battle if he is the last unit standing, just like the anxious droid we know and love. “What he lacks in damage he more than makes up for with the powerful new debuff ‘Confuse,’” says Powell. Here’s how it works: “His opponents are inflicted with ‘Confuse’ when C-3PO uses either his basic or special ability.” Similar to his translation powers, “’Confuse’ has a stacking effect. The final and most debilitating application increases enemy cool downs whenever they use a basic ability.” In-game, as on film, sometimes C-3PO’s antics have a hilariously confusing effect.