An entire legion of new, fan-designed Star Wars shirts await you at UNIQLO. The tees come as a result of the store's UT Grand Prix 2015 contest -- which drew 5,218 entries --  asking fans to create their own fashions inspired by a galaxy far, far away. As usual with Star Wars aficionados, designs were far-ranging and original, incorporating different influences and styles. A panel of judges including cartoonist Jeffrey Brown (Darth Vader and Son), UT creative director NIGO, Lucasfilm executive creative director Doug Chiang, and Star Wars Rebels art director Kilian Plunkett picked the winners; in total, 23 new T-shirts are now available, including four made by the judges themselves. Check out the winners below with commentary from the panel, along with a full gallery of the tees, and buy yours now at UNIQLO stores or UNIQLO.com! 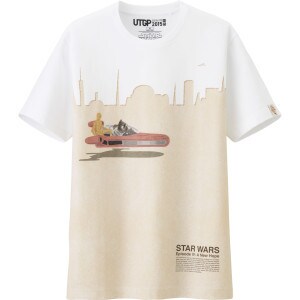 NIGO said, “The design features a scene from Tatooine, which appeared early in Star Wars. On the front of the T-shirt is Obi-Wan Kenobi on a landspeeder, while Han Solo and Chewbacca are on the back. The inspiration from the fateful encounter in Mos Eisley is wonderful.” 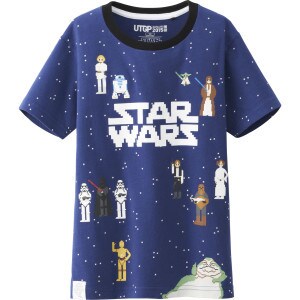 Jeffrey Brown said, "8-bit video games were a big part of my formative 1980s years almost as much as Star Wars, so this shirt was a perfect mix of retro nostalgia. The ubiquitous star field background and the placement of the heavy Jabba at the very bottom of the shirt highlight this effective design, which also includes every key character from the original trilogy." 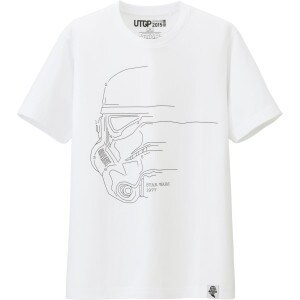 UNIQLO and Lucasfilm chose this design as the recipient of the Darth Vader award because of its bold lines and striking black and white color contrast signifying the regimented rank-and-file of the Galactic Empire. This deconstructionist execution of powerful lines extending from the stormtrooper helmet is a testament to imperial dominance throughout the galaxy. This one icon is a symbol of fear, the expansive platoons of countless stormtroopers representing the one indomitable Empire. 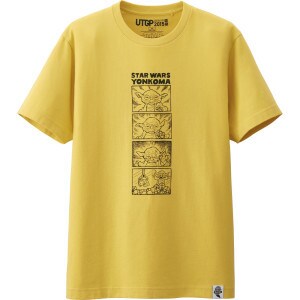 "One of the things I love about Star Wars is the humor, and ever since he first appeared on screen in The Empire Strikes Back, Yoda has been one of the funniest characters. This shirt has its own take on Yoda’s personality with a drawing that really captures the puppet quality of Yoda, as well as the fun and lighthearted side of the Star Wars universe. I love the build-up of intensity as Yoda focuses, especially the tilt of his head and bead of sweat in the third panel. Fitting the joke into the yonkoma format works perfectly, too." 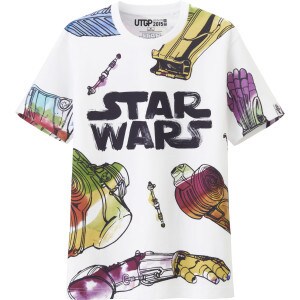 “This T-shirt vividly brought to life the scene where Chewbacca picks up the broken pieces of C-3PO. I found the placement of colorful items (not just gold) all over the T-shirt very refreshing. I am sure that Star Wars fans will like it.”

"Making my final selection for the Doug Chiang Award was very challenging. There were so many wonderful designs to choose from. However, in reviewing all the submissions, one in particular kept drawing my eye. Something about this one T-shirt captured the spirit of Star Wars for me. It was confident, bold and simple. In its simplicity, though, the rich nuance of the diverse Star Wars characters shines through. Like great logos, the artist’s clean shapes and bold colors beautifully capture the essence of the iconic Star Wars characters they represent. This is a T-shirt I would enjoy wearing!" "The design I chose for my award was one among many creative and interesting designs submitted for this project. It was a tough choice but in the end the simple graphic shapes and bold colors of this T shirt stood out to me among the others. I have to admit that 3PO and R2 have always been favorite characters of mine too! The simple, stylized versions of the droids captured the if personalities and made for a clean, eye-catching graphic that I think looks ideal as a shirt graphic and I hope you enjoy it too!"