The Personal Impact of Doctor Aphra

In celebration of Pride Month, one StarWars.com writer reflects on how she connected with the Star Wars galaxy’s rogue archaeologist.

I've been a Star Wars fan since before I can even remember, but it wasn't until a few years ago that I truly felt seen by the galaxy that I loved so much. And that was due in great part to Doctor Aphra.

Everyone comes to Star Wars through different avenues and everyone stays for different reasons. Usually, those reasons involve finding characters and storylines that we connect with. For me, my love of Star Wars began with the original trilogy. I used to run around my yard pretending to be Princess Leia and turning empty wrapping paper tubes into lightsabers with the copious use of markers. As the years passed, that love only deepened as I discovered the Legends books and the prequel trilogy was released, and I found more women in the galaxy far, far away to love (and wish I could be as cool as). But none of the ones in prominent roles looked like me (a half-Chinese girl) and, although I didn’t realize this about myself until I was older, there were no characters in the Star Wars galaxy who were queer like I was, either. At times, it felt as if you could only be a part of the galaxy if you looked and were a certain way. But still, I loved Star Wars even if I couldn’t see myself amongst those characters up in the stars. 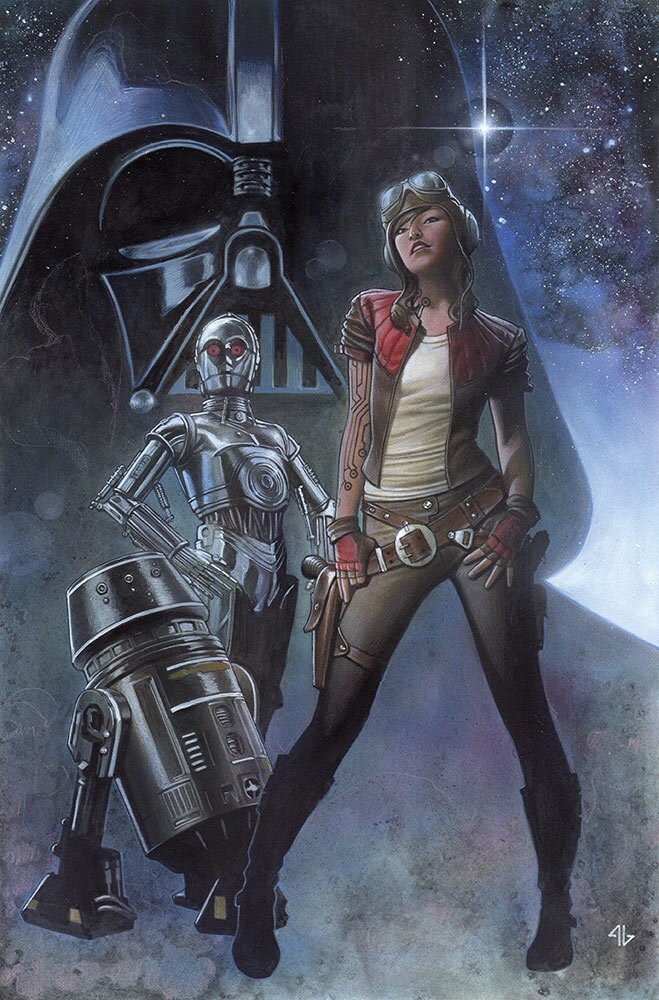 On the other hand, I do remember exactly when I first encountered Doctor Aphra. It was December 2014. Marvel Comics had just released their solicitations for March. Amongst them was the cover for Star Wars: Darth Vader #3 (a comic series that had yet to launch). It featured an Asian woman wearing an aviator cap and a killer jacket front and center. “When a Dark Lord needs help, who can he turn to?” the solicit read. “Meet Aphra—the galaxy’s foremost raider of lost weaponry!” Even though everyone in my friend group saw right through me, I technically waited until I read the issue and THEN proclaimed that I loved her. Aphra was capable even if she frequently stumbled into disaster, and she had this delightful snark and humor to her way of speaking. Between Aphra and Star Wars Rebels’ Sabine Wren, we were finally starting to have Asian women featured prominently in Star Wars and I was genuinely thrilled.

What I never expected was for Aphra to also be a lesbian. The year Aphra debuted was the same year we got two, right there on the page, new queer characters in Star Wars (Moff Mors and Sinjir Rath Velus). Their existence is what allowed me to have hope when the main Star Wars comic seemed to very strongly hint that Aphra and Sana Starros had once been a thing. Less than a year later, we had on page, blatant confirmation that Aphra was interested in women (and had apparently had terrible taste in them, according to her father!). Ten issues after that, we got a full-page panel of Aphra and Tolvan (her current love interest) kissing in Star Wars: Doctor Aphra #16. Somehow, this cool-looking character whose name I barely even knew and who I never expected to survive an encounter with Darth Vader, had not only lived, but now had her own ongoing comic. And she was the queer representation the Star Wars galaxy had so desperately needed. I don’t know if Kieron Gillen and Salvador Larroca, the co-creators of Aphra, knew the impact she was going to have. But Doctor Aphra has been an absolute gift to both the Star Wars world and so many LGBTQ+ fans. 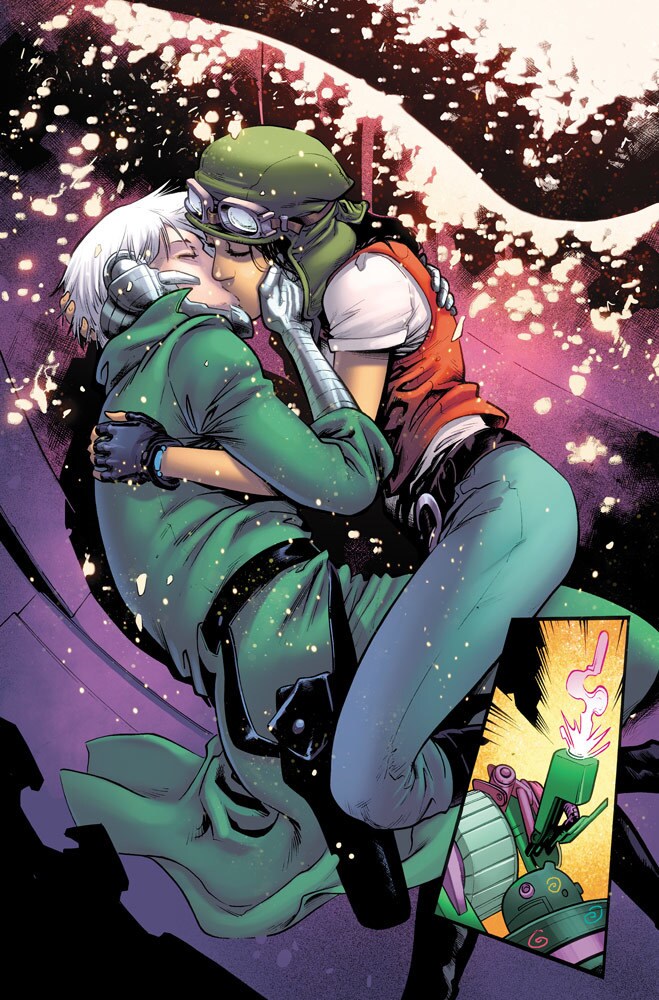 The thing about Doctor Chelli Lona Aphra is that, despite being a fictional character who gets into absurd messes, she feels so very real. Aphra’s queerness has never felt as if it is there just to be plastered in headlines proclaiming her as “Star Wars’s premiere gay character!” Why? Because Aphra is a well-rounded human being of a character. She is an archaeologist who clashed with the Sava in charge of approving her graduating with her doctorate. She used to work for Darth Vader. She’s been in a rebel prison. She’s got really bad luck when it comes to her relationships. And yes, she’s a lesbian. All of these things are just a part of who she is. She might be a walking, talking chaotic disaster lesbian, but we love her all the more for it.

I am far from the only person to whom Aphra means a lot. I’m typing this on a laptop with stickers of Aphra and her old flame, Sana Starros, beside the trackpad that were gifted to me by a fellow Aphra fan at Celebration Chicago. I have made so many friends partially because we were able to bond over a shared love for her. One merely needs to go on Twitter or walk around the convention floor to see how much she has meant to so many LGBTQ+ Star Wars fans; even those who usually just love the good guys. 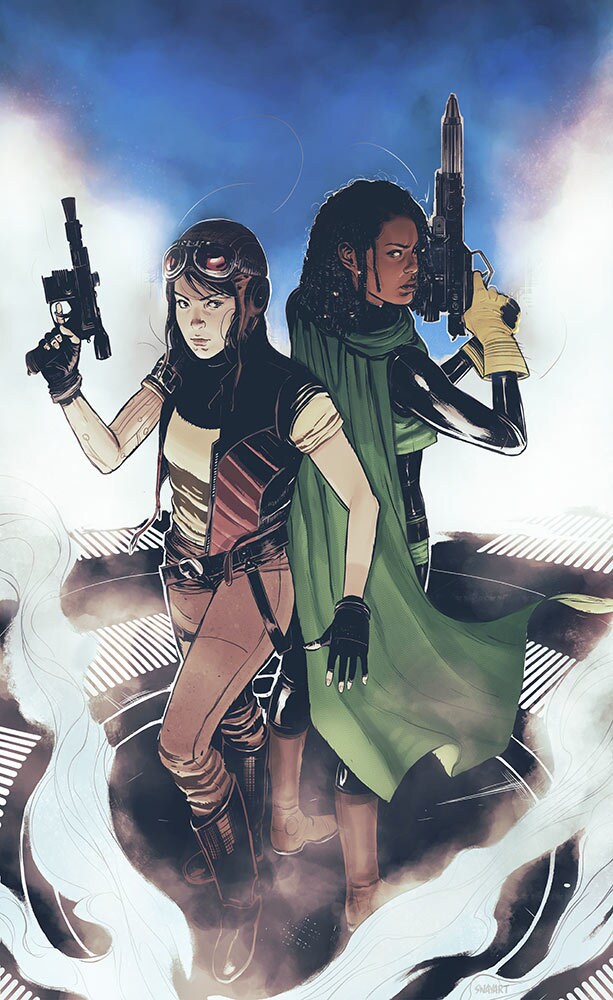 I wish I’d had a character like Aphra in Star Wars when I was growing up. Growing up, there were very few LGBTQ+ characters within the media I consumed. Straight was seen as being the default and that carried over to the real world, too. To the best of my recollection, almost no one in my small high school was openly queer. (Now though, I would need more than my fingers to tick off all of us from my old school who are out.) Much like how the comics revealed Aphra to be a lesbian gradually over time with little moments here and there, it also took me a while to realize that I was queer. There is no one comic panel that I can point to as the "Ah-ha! I am a part of the LGBTQ+ community!" moment in my life. Maybe if there had been queer characters in the stories I loved to help normalize it, I might have figured out a truth about myself a little sooner. And just maybe, if I had seen how Aphra liking other woman was so casually accepted by the people around her without anyone raising any eyebrows, perhaps I might even have accepted it about myself faster, too. 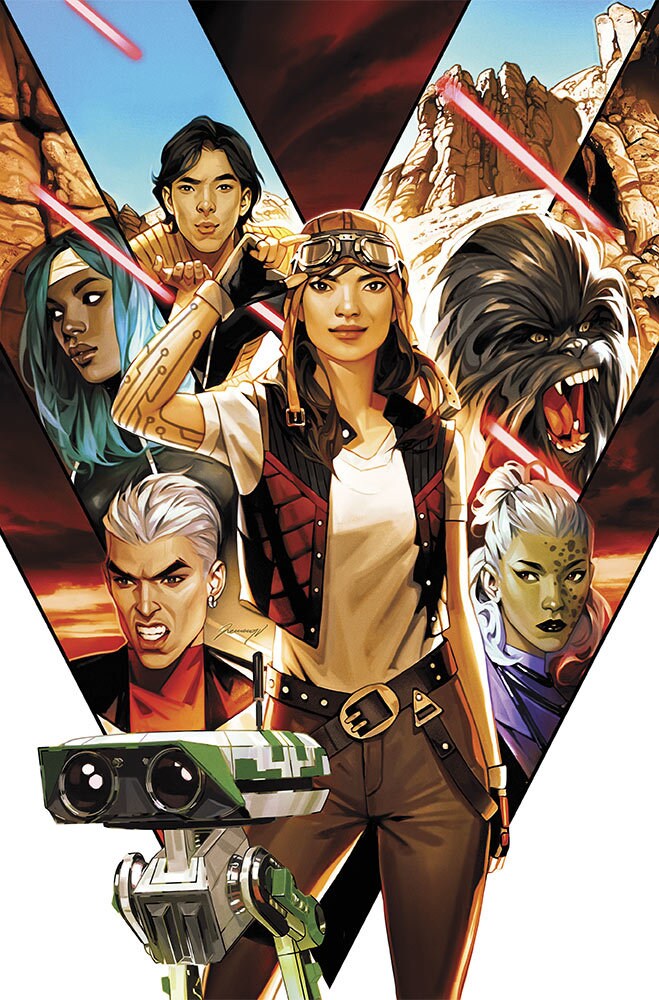 That’s what we mean when we say that representation matters. Even though Star Wars is just a fictional universe, the representation within its stories has an effect upon those of us in the real world. When you finally get to see and read about characters who you can relate to because of how they look or because of the people they love, it feels as if the galaxy you care about so much is finally saying that you belong here, too. Star Wars can and should be for everyone. It’s a big galaxy and there is room for all of us.

This is the first year that Star Wars is putting out covers featuring queer characters for Pride Month, and Doctor Aphra is there on the variant for Star Wars: War of the Bounty Hunters #1. It’s something I never thought, way back when I was in high school and the height of queer representation in Star Wars was a Mandalorian briefly mentioning his husband, would ever happen. And yet here we are.

This is not the pinnacle of queer representation in Star Wars, or at least I hope it’s not. And nor should it be. I truly hope we will see openly queer characters featured in leading roles in future television shows and movies. We have moved past being content with just blatant subtext. Representation matters. It has always mattered. This next generation of Star Wars fans deserves to see themselves in the stories they love and to never doubt that they belong in this wonderful fandom. But Aphra, and all of those who have played a part in her story thus far, have blazed a path forward for more queer characters in the Star Wars galaxy.