The Latest on Ewoks and Rancors: Vintage Return of the Jedi Poster Magazine #2

Revisit a pre-Internet gem, covering everything from Chief Chirpa to the creature shop.

It’s summer 1983 and Return of the Jedi has been released and is bringing in more credits than a second-hand Death Star. The latest wave of Palitoy action figures are sweeping the country, bringing Gamorrean Guards, Bib Fortuna, Admiral Ackbar, and Ewoks into kids collections. Tie-in promotions can be found everywhere, newspapers are running stories on the huge success of the final Star Wars film, and for fans of the saga, books and magazines offer a plethora of information and images to pour over and investigate. In the days before social media, the Web and the Internet, this was the best way to get your information. The ONLY way, and it was during this fertile period that issue two of the Return of the Jedi poster magazine arrived.

Sitting behind a purple cover and using the square Jedi logo, we’re treated to two very distinct images and the two characters who represented Jedi the most during those days in 1983 -- Wicket the Ewok and Jabba the Hutt. While never meeting each other during the film (they were on opposite sides of the Outer Rim and Wicket’s glider couldn’t fly quite that far) they were front and centre in most magazines and ads at the time, with the Ewoks appealing to younger kids and Jabba to the older fans who’d been waiting to meet him since 1977. 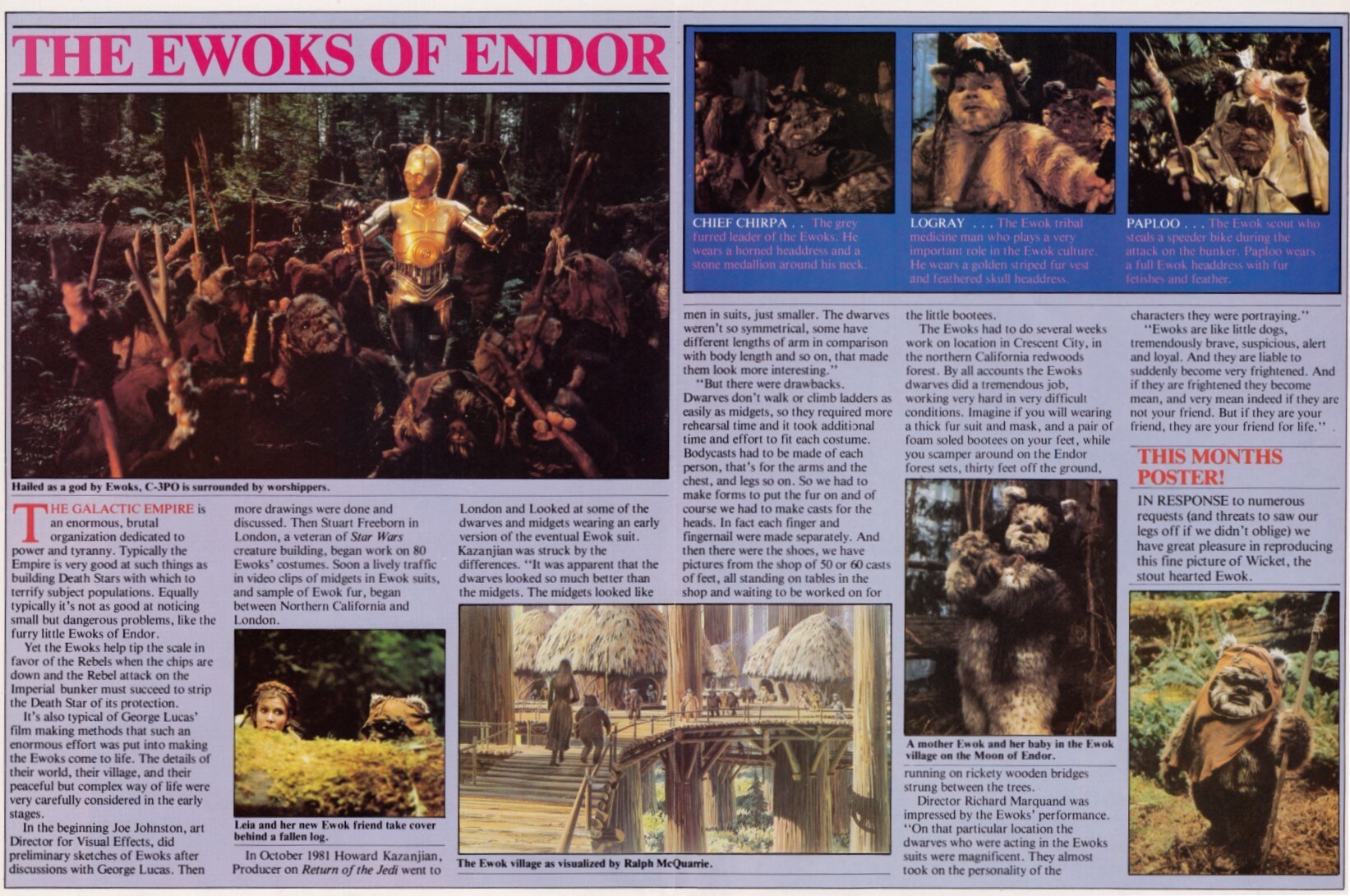 We turn the page and enter the Star Wars galaxy once again with an article entitled "The Ewoks of Endor." For weeks and months we’d seen many of the same images of our heroes and villains, including characters old and new, and with the release of these poster magazines the amount of new, unseen images expanded. Remember, this is three years before the film hit home video and despite the proliferation of pirate videos that were doing the rounds at the time, most people had little chance to freeze-frame and take in the detail on screen. Now we were able to take in the sumptuous designs and sets, along with the new characters of the Ewoks.

Unnamed in the film (but named in the credits), we see their names written down -- Chief Chirpa, Logray, Paploo, and, of course, Wicket himself. Chirpa is described as “The grey furred leader of the Ewoks. He wears a horned headdress and a stone medallion around his neck.” Logray is “the Ewok tribal medicine man who plays a very important role in the Ewok culture. He wears a golden striped fur vest and feathered skull headdress.” And the brave Paploo is “the Ewok scout who steals a speeder bike during the attack on the bunker. Paploo wears a full Ewok headdress with fur fetishes and feather.” At the time, when all we knew was what we’d seen on the screen or read in the proliferation of children’s books based on the Ewoks, this was essential information and, in those days, enough at a time when the barest of information was fuel for our fertile imaginations.

The main body of the article looks at these diminutive heroes of Endor and how the might of the Empire all but shrugged them off as little more than forest vermin. Joe Johnston was tasked with the design of the Ewoks before creature creator Stuart Freeborn took over and turned them from 2D sketches to three-dimensional reality. 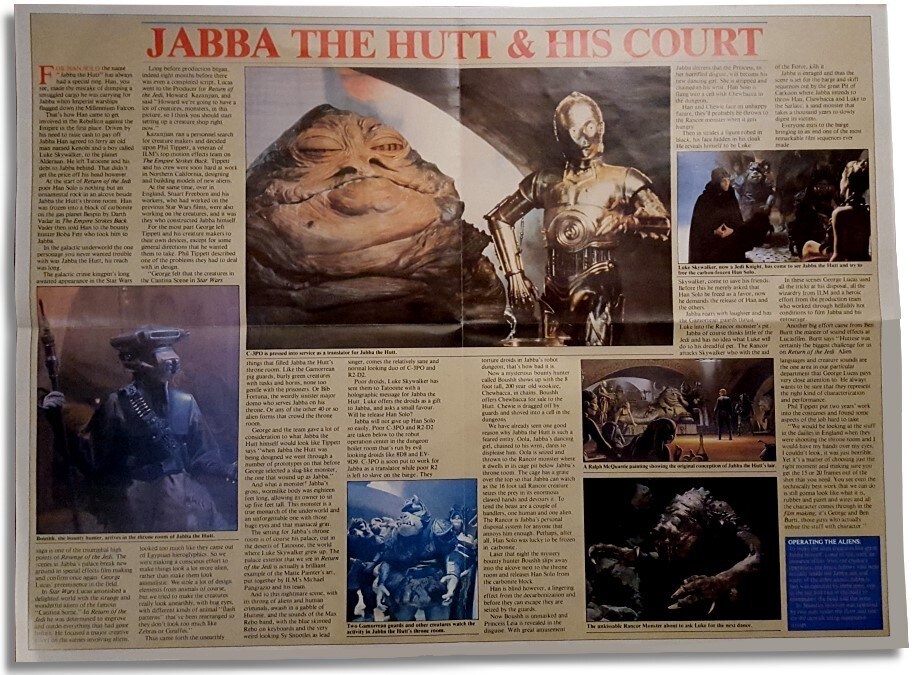 Fold once more and we enter deeper into the poster magazine with a look at "Jabba the Hutt And His Court." Here we go in-depth into the many creatures and characters, cast and crew who brought this intergalactic menagerie to life. At the very outset of the production, upon the insistence of George Lucas who wished to outdo his iconic cantina with much larger and more lavish scenes, producer Howard Kazanjian was tasked with setting up a creature shop and, along with it, pulling together some already legendary geniuses to run it. Enter Phil Tippett and his crew who were soon working hard in California designing new and exotic aliens while here in the UK Stuart Freeborn did the same, building a growing rogues gallery of aliens as well as the big cheese himself -- Jabba the Hutt.
Says Phil Tippett, “When Jabba the Hutt was being designed we went through a number of prototypes on that before George selected a slug-like monster, the one that wound up as Jabba.” And so the crew embarked upon building the Jabba puppet, at the time the biggest ever created for film with up to five operators bringing him to life.

But Jabba’s palace required more than just sets, actors, and puppets. Mike Pangrazio and his team worked on detailed matte paintings of the exterior of the palace while Max Rebo and his band were crafted by the creature shop. And below their very feet the rancor, designed and operated by Phil Tippett. Brought to life using a variety of techniques including Japanese puppetry Tippett credits the "reality" of the rancor to two other people. “We would be looking at the stuff in dailies in England when they were shooting the throne room and I would have my hands over my eyes, I couldn’t look, it was just horrible. Yet it’s a matter of choosing just the right moment and making sure you get the right 15 or 20 frames out of the shot that you need. You see even the technically best work that we can do is still gonna look like what it is, rubber and paint and wires and all the character comes through in the film making, it’s George and Ben Burtt, those guys who actually imbue the stuff with character.” 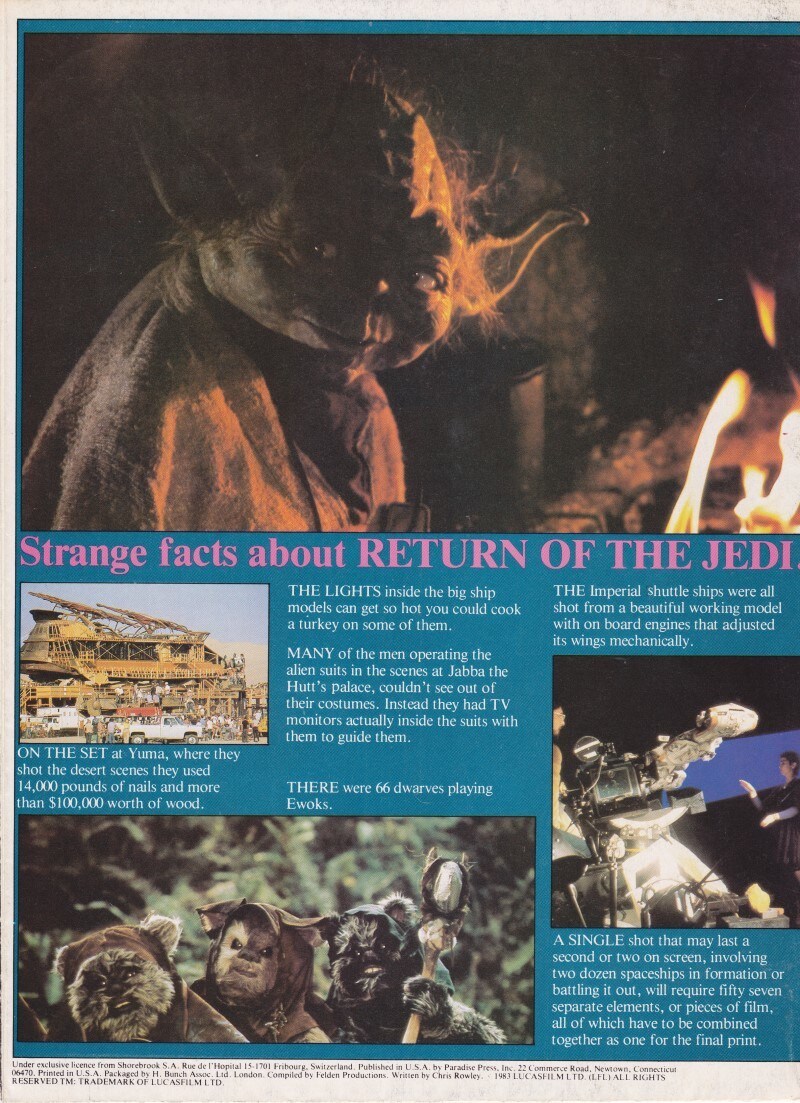 The back page ends the issue with a series of "Strange Facts About Return of the Jedi." Perhaps not all so strange in the 32 years that have passed since it arrived in our galaxy, but did you know that the lights inside the big ship models were so hot you could cook a turkey on some of them? And finally, a fact that tells us that a single shot -- with only a couple of seconds of ship battles on screen -- could involve up to 57 separate elements of film, combined together for the final print. Those guys at ILM weren’t simply technicians, they were magicians.

Join me again for issue 3 of the Return of the Jedi poster magazine series when we’ll set course for the transports and weapons of the film!

Mark has contributed to Star Wars Insider for almost a decade, is the owner of Jedi News, writes for DeAgostini's Build The Millennium Falcon partwork magazine, the UK’s largest free newspaper The Metro, and co-hosts RADIO 1138. He's a Rebel Legion UK supporter, an honorary member of the UK Garrison, and a friend of the Rebel Legion, and when he’s not talking, tweeting or writing about Star Wars, he can usually be found sleeping where he’ll most likely be dreaming about Star Wars.