The Galaxy in Comics: Beckett #1 and the Grit of a Gunslinger

The one-shot comic from Marvel spotlights Beckett's crew, Val and Rio, and his nemesis, Enfys Nest, in a tale set before the events of Solo: A Star Wars Story.

The Galaxy in Comics is a deep dive into the events and themes of one recent Star Wars comic. In this installment, StarWars.com checks out Beckett #1. 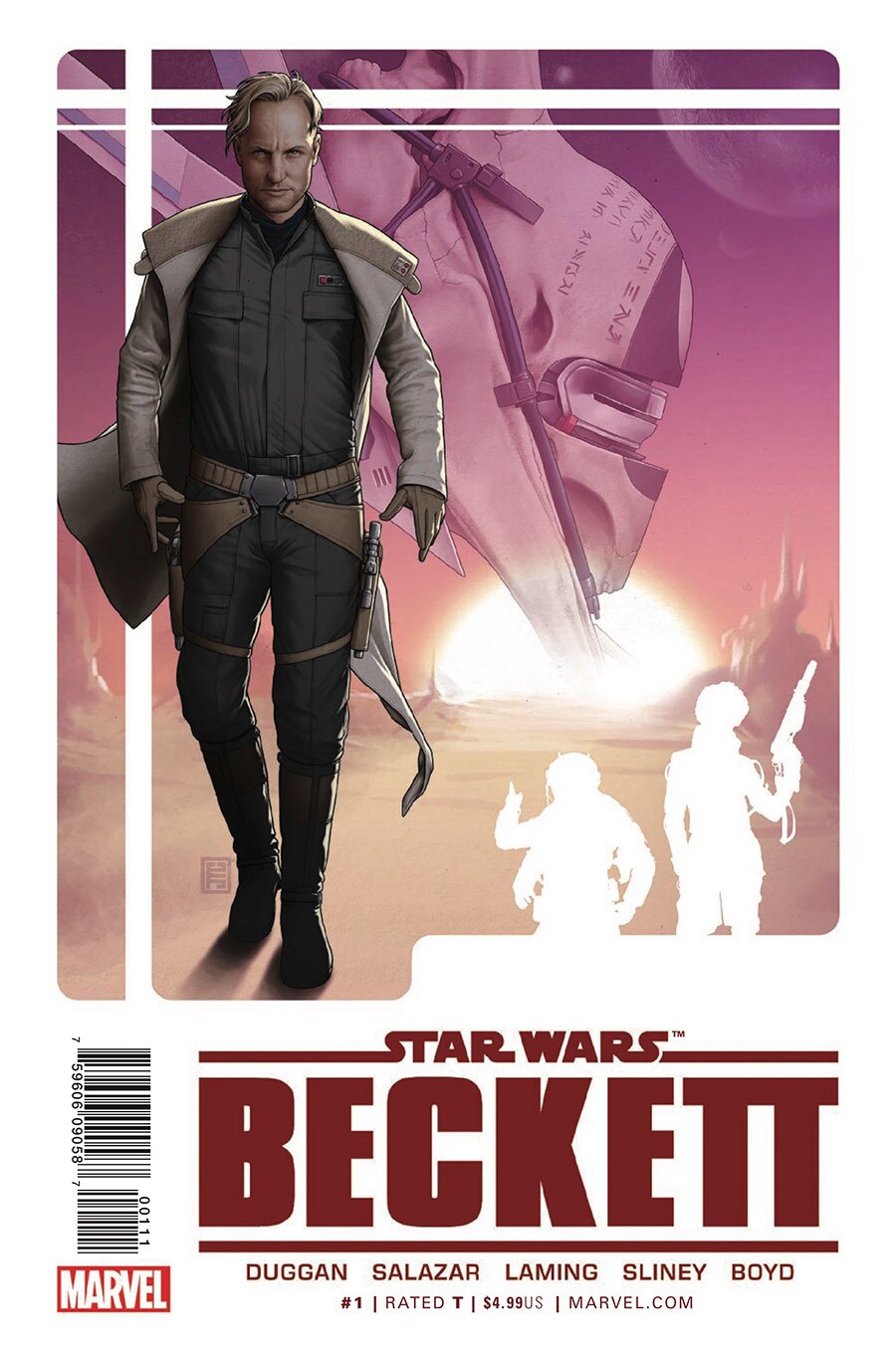 Like any good prequel, Marvel’s latest one-shot comic Beckett #1 adds depth to multiple moments in Solo: A Star Wars Story.  The story gives us more of both Enfys Nest’s Cloud-Riders and the trio of scoundrels – Beckett, Val, and Rio. If you’ve been wondering why there’s such bad blood between the two crews, this is definitely the comic for you.

Stylistically speaking, Beckett #1 leans into the western adventure storytelling aesthetic from the opening credits to the final page. The oversized story is divided into three parts with each chapter getting an appropriately western title. Artist Edgar Salazar leads things off with “The Man in Black.” Marc Laming draws “To Live and Die on Hovun IV.” And Will Sliney brings it home with “You and the Bantha You Rode In On.” (Sadly, Beckett does not actually ride a bantha in this comic.)  Each artist’s work is noticeably different, making each act feeling distinct, yet their styles are complimentary especially with Jordan Boyd’s colors as a unifying element.

Although Beckett is the titular character and star of the comic, the issue happily gives us just as much Val and Rio. Writer Gerry Duggan absolutely has Rio Durant down pat and you can’t help but hear Jon Favreau’s voice in your head when he asks why Beckett always gets to be the evil wizard or casually explains that he only has two blasters so obviously his other two hands are free to make a drink in the middle of a fire-fight. Rio is more than just a pilot with some great one-liners. He’s also the one you want watching your back.

The same could be said for Val. She’s far less flashy than either Beckett or Rio but she’s absolutely an integral part of the team, the cool and collected person who reminds the others that cheating Dryden Vos is really not in their best interest and that getting out of debt to him won’t matter if they’re dead. Duggan makes us wonder how Solo might have gone down if Val had survived to temper Han’s crazy plans.

Both Val and Rio are fantastic characters in their own right, but they also help balance Tobias Beckett. At first glance, he may seem like the same gunslinging man we get to know in Solo but there are subtle differences when he has his team by his side. Sure, he told Han Solo to trust no one but here it certainly seems like he trusts both Val and Rio with his life. They’re a well-oiled machine. Things still frequently go wrong, but they can always rely on each other to do their part without much discussion.

Every con team has their tried and true ruse that can be repeated every time they need money fast and for Beckett’s crew, it’s the fake death ploy. Rio goes in first and joins a card game and once it’s well under way, Beckett enters in a black cloak as the Death Priest, searching for him. They take advantage of local superstition and everyone flees, leaving Rio to his supposed forthcoming demise. “Nobody dies like you, Rio,” Beckett says with a smirk once he scares everyone away. This is a double-edged sword of a line, both a humorous crack and a painful reminder of Rio’s final moments above Vandor. His cavalier attitude towards death here has an underlying sense of tragedy and Duggan isn’t afraid to twist the knife more than a few times, as when Val mentions death as an avenue for wiping a ledger clean of debts and Beckett waves her concern off. Beckett is focused on the future, and how they’ll have to take bigger risks one day… and we all know how that ultimately works out. 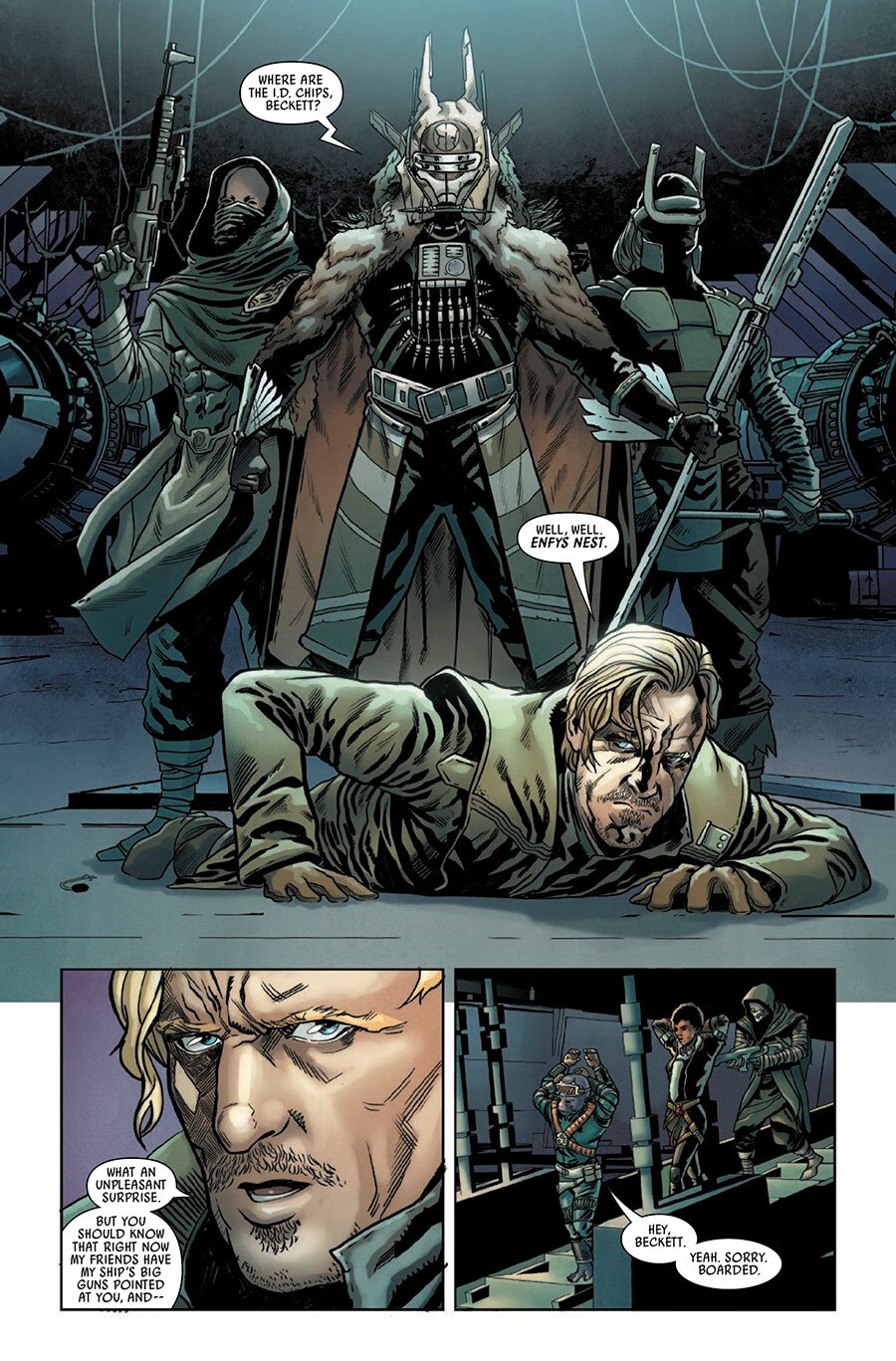 Although she only appears in the third chapter, Beckett #1 also adds to the mythos of Enfys Nest. On Vandor, it’s immediately evident that she and her Cloud-Riders have history with Beckett’s crew and it’s not a friendly one. (Few things that end in explosions are.) Her deceptions are a slight of hand just like her helmet: designed to make you think one thing while the truth lies right beneath the surface. Why would anyone bother to suspect the Cloud-Riders of rebelling against the Empire when they’re obviously just another gang of marauders? The moral of Star Wars continues to be never underestimate a smart and motivated teenager.

Beckett #1 tells its own contained, small-scale story yet gives us more of some of the most intriguing supporting characters from Solo. We’re still left wanting more of Beckett, Val, Rio, and Enfys but that’s just a sign of a job well done. For now, we’ll have to settle for a comic with death, deception, and drinks. What else could a reader want?

Comics Marvel The Galaxy in Comics