Star Wars Rebels: Edge of the Galaxy and the Grav-Ball Gridiron

The author of Star Wars Rebels: Servants of the Empire - Edge of the Galaxy discusses creating a new sport for a galaxy far, far away.

Last fall, Lucasfilm approached me with one of those offers you can’t refuse -- the chance to write a quartet of young-adult books that would connect with Star Wars Rebels.

My editor explained that the setting of the Servants of the Empire series would be Lothal, with action taking place in Capital City, with its Imperial Academy, as well as in the lush green grasslands surrounding the city. The protagonist would be a supporting character from the show -- Zare Leonis, a young Imperial cadet who helps Hera Syndulla’s rebels from inside the Imperial war machine.

The broad outlines of Zare’s story had been established: Zare was an immigrant to Lothal who dreamed of serving the Empire, following in the footsteps of his older sister Dhara, the star cadet at Lothal’s Imperial Academy. But Dhara would disappear under mysterious circumstances, forcing Zare to rethink his beliefs and risk everything to find her. 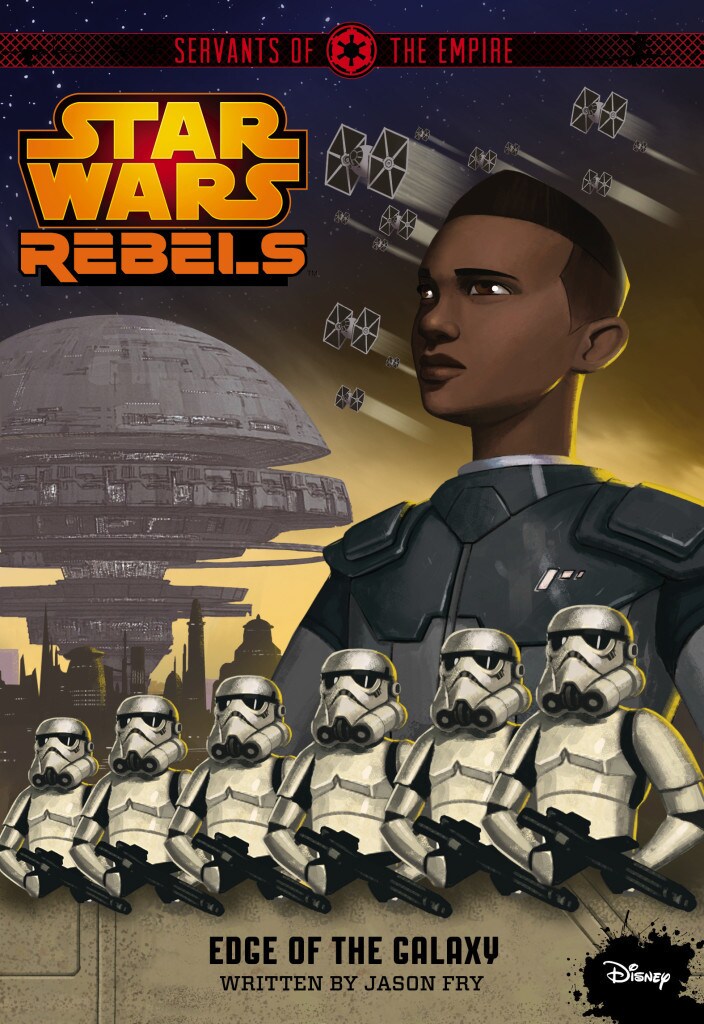 The Servants of the Empire series would include Zare’s appearances on the show, but I’d have a free hand with the rest of his story, assisted by the Story Group and the Rebels team. Zare’s background was left for me to figure out, as was the outcome of his search. With the first novel, Edge of the Galaxy, I’d be telling a story set before Zare’s TV debut -- my job was to explain how the kid we’d meet at the Academy got there and became who he was.

Before I knew anything else about Zare or even saw a sketch of him, I knew the story I wanted to try, and it was one Star Wars hadn’t told before. I wanted to write a sports novel. A quiet farming world undergoing momentous change made me think of Friday Night Lights, Buzz Bissinger’s chronicle (later a TV show in its own right) of a Texas town where high-school football was everything. What would that kind of tale be like on a frontier world in the Outer Rim?

(Before we go any further, a reassuring word: If you’re not a sports fan, there’s a lot more going on in Edge of the Galaxy than just what happens on the field. Among other things, there’s a speeder-bike chase, computer hacking, a nanny droid with strong opinions, and even some romance. So trust me, OK?)

I knew right away that I wanted Zare to be the leader of his team, a city kid who’d have to win the trust and respect of a bunch of farm boys. But what sport would they play? I’m a huge baseball fan, but baseball was too much about the individual for the story I wanted to tell. American football was a better fit, but I didn’t want to simply transplant it into space. 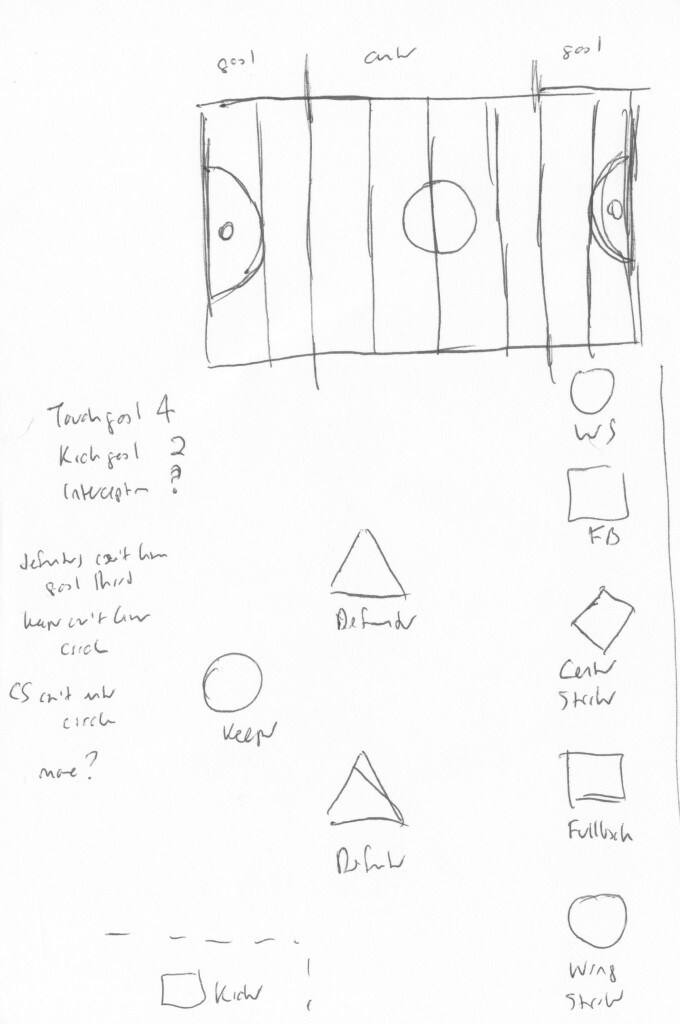 So I hunted through my West End Games manuals and comics, and became intrigued by grav-ball. As depicted by Dark Horse, grav-ball looked like a combination of basketball and lacrosse, with players wearing hover boots. I didn’t like the boots or the other “spacey” aspects of grav-ball -- they’d be distracting in a character-driven narrative -- but I saw no reason there couldn’t be versions of the sport on different worlds. It’s a big galaxy, right?

So I decided Zare would play an outdoor variant of grav-ball, on the ground with no hover boots allowed. And he’d be the center striker of the AppSci SaberCats.

According to the rules I invented, grav-ball is like American football with a bit of net-ball and a touch of hockey. Here are the basics:

The field (called the grid) is 64 meters long and divided into eight octets, each of which is eight meters long. The game begins with a chance-cube toss, and the team that wins the toss starts at the center line dividing the fourth and fifth octets.

The team on offense gets three drives to pass or carry the ball forward a total of eight meters into the next octet. Succeed, and you get another three drives. Fail, and the ball is turned over to the defense, which is trying to go the other direction.

In the middle of the first and eighth octets at each end of the grid are two scoring circles (actually semicircles), surrounding a three-meter hoop on a stalk. Putting the ball through the hoop by hand or throwing it through the hoop from within the scoring circle is a touch-score and worth four points; kicking it through from anywhere on the grid is a kick-score and worth two points.

A grav-ball squad consists of nine players. The key player is the center striker, who begins each drive with the ball and can run it himself or herself, hand it off to another player, or pass it down the grid. The center striker is flanked by two fullbacks, with two strikers farther out “on the wing.” Fullbacks typically carry the ball, while strikers dart out to catch passes. Behind the center striker is the defense, consisting of two defenders and a keeper whose job is to protect the goal.

The ninth player is the kicker, a specialist called on as a substitute when a kick-score is needed. The kicker also comes in for a trap-kick, kicking the ball down the grid on third drive to force the other team to cover more ground. There are restrictions on what a player at a given position can do -- for instance, a keeper can’t leave the scoring circle and the center striker can’t enter it even if he or she has the ball. Besides battling each other, teams must contend with the clock -- a grav-ball game is divided into three periods (called triads), each 20 minutes long.

Those are the basics. I wanted a draining game in which players had to play both offense and defense. (This also meant no scenes of Zare standing on the sidelines.) I also liked giving the key player a different profile than a quarterback: In grav-ball, the center striker is responsible for strategy on both sides of the ball and has to do a lot of improvising, as the coach only gets one “coach’s time-out” per triad.

So what lessons does Zare learn on the grav-ball grid? That would be telling, but I wanted to explore what a kid headed for a military career would take from being captain of a team sport. Were there lessons he could apply to the Academy, or was the link between sports and war a cliché he’d reject? I also wanted to make Zare’s team reflect the Empire’s growing influence on Lothal. What connections would exist between the powerful athletic director at Zare’s school and the Imperial hierarchy? What was the experience of nonhuman players on the team? And would the Academy-bound Zare think about the season differently than teammates who expected to become farmers?

In Edge of the Galaxy, Zare will form close friendships with Beck Ollet, his powerful, hot-headed fullback, and with Merei Spanjaf, a kicker with a keen sense of strategy that she backs up by crunching data on opposing teams. He’ll also meet Athletic Director Fhurek, and discover what happens when you cross the most-powerful person at a sports-mad school. What happens on the grav-ball grid will bring Zare, Beck and Merei closer at times. But it will also reflect the tensions pushing them apart, as the Empire’s hunger for power changes their lives.

The SaberCats’ season will come down to a single play, with Zare taking the ball as time runs down and Fhurek watches from the stands. That’s what sports is all about, right? But Edge of the Galaxy also tells what happens after that, as Zare discovers he’s playing a more dangerous game -- one with unclear rules and no guarantee of survival, let alone victory.