This new book encourages kids to think outside the box -- and then turn it into a mouse droid.

You won’t be hearing any complaints from bored kids this summer if you pick up the new Star Wars Maker Lab book from DK Publishing, available now. This colorful, crafty book is jam-packed with art projects, STEAM-themed activities, and trivia about the galaxy far, far away that you don’t even know. (Before you scoff, do you know the name of Jabba’s favorite snack?)

STEAM stands for science, technology, engineering, art, and math. While encouraging STEAM education is incredibly valuable, many parents and educators feel that incorporating art in those activities can make for more well-rounded, engaging experiences. Add Star Wars, and you’ve got the perfect project for a summer afternoon.

Projects in Star Wars Maker Lab, written by Liz Heinecke and Cole Horton, range from re-creating classic science experiments like baking soda volcanoes to crafting an artificial arm out of cardboard, straws, and tape, all with a Star Wars twist. This combination of science and creativity is the heart of STEAM. Along with the projects, you’ll find detailed facts about real-world science and the Star Wars universe.

These maker projects are aimed directly at kids, encouraging them to experiment and get their creativity Force flowing through them. Most projects don’t even require a trip to the store and can be put together with items you already have stocked in the pantry or stashed in the recycling bin. 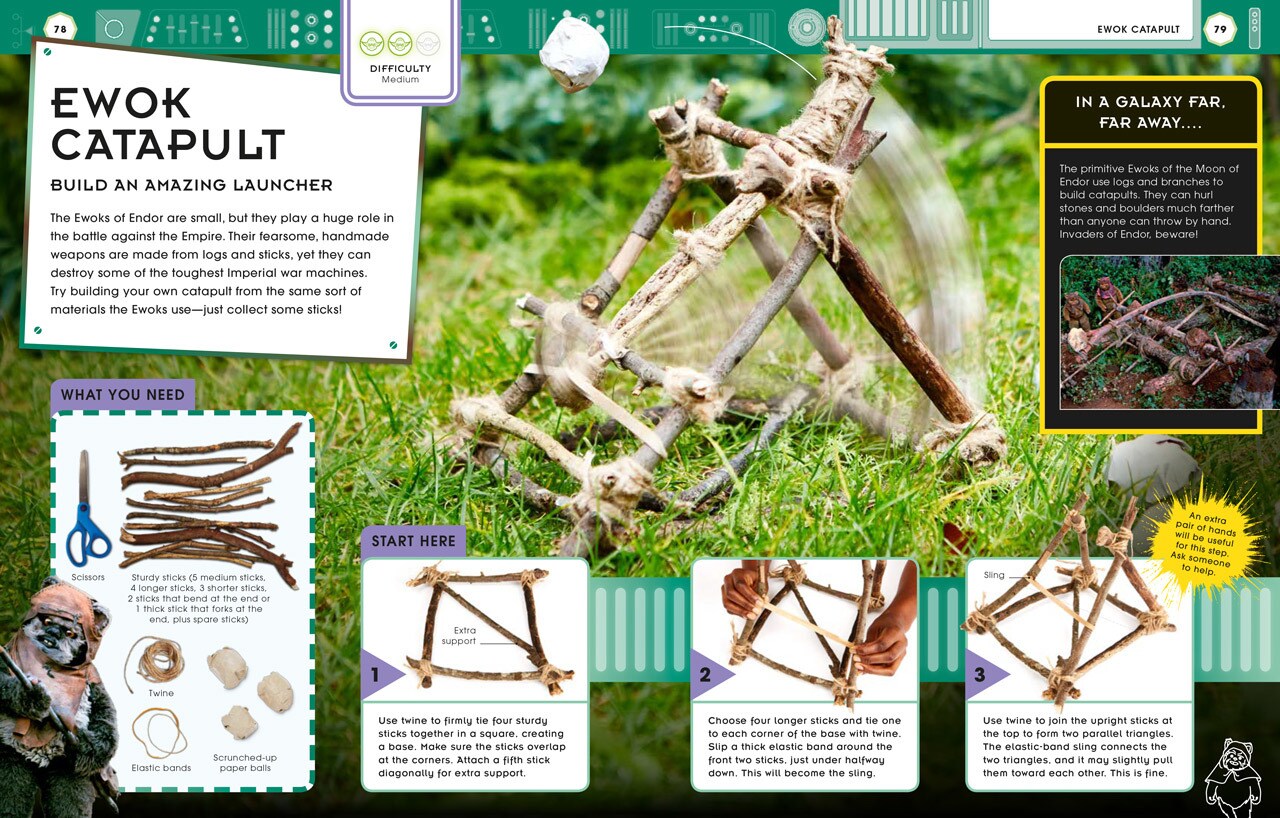 One of the most fun -- and cost-effective! -- projects sends kids into the summer sun, collecting sticks to create a catapult the Ewoks would be thrilled to use on unsuspecting stormtroopers. Hunting for sticks might take the most time when working on this project, but the sturdier they are, the better the catapult will work. Choose a thick twine and sturdy rubber bands, and with the concise, easy-to-follow directions, it’s almost impossible to mess this one up. The instructions call for starting with a supported square base, and then tying four more sticks together vertically. (Parents’ helping hands can come in, well, handy for that part.) Another stick and a rubber band go near the bottom, along with the arm of the catapult. And then it’s time for the Battle of Endor to be waged in your own backyard.

Kids can make harmless rocks out of masking tape and crumpled paper balls; my nine-year-old chose to paint a pom-pom to look like a stone. Place it on the catapult, pull back, and launch! Star Wars Maker Lab encourages creativity, trial and error, and putting your own spin on a project. In addition to building one of the book’s fun crafts, StarWars.com caught up with authors Liz Heinecke and Cole Horton to discuss making Star Wars Maker Lab.

StarWars.com: How much trial and error does it take to create a project like the Ewok catapult?

Liz Heinecke: The Ewok catapult is a great example of the cooperation that goes into making a book like Star Wars Maker Lab. When I first proposed the project, I was inspired by Gungan energy catapults, and invented a water-balloon slingshot using yoga bands to demonstrate the transformation of energy. The team at DK liked the idea, but decided that an Ewok catapult would be more fun to construct, so they gave me basic instructions for building a launcher using sticks. I headed out to my backyard to cut up branches and make a catapult. It took some trial and error, finding the right sized sticks, re-tying strings and testing rubber bands, but in the end it worked really well and looked amazing. Both the slingshot and the catapult utilize potential energy stored in elastic bands, so I still got to write about the transformation of energy. Cole added some cool facts about Ewok weaponry, and we were all set!

Cole Horton: Thankfully for me, Liz has tons of expertise and experience with all of the projects in the book and did a fantastic job adapting them to fit the Star Wars galaxy. The team back at DK also did painstaking work to make the instructions as clear as possible. They also designed really helpful templates for many of the topics. I think the end product is a very user-friendly set of projects that almost anyone can do. Once you find the right sticks, you’ll be using your catapult to take the Empire in no time!

StarWars.com: What is it about Star Wars that lends it so well to STEAM?

Cole Horton: One of the most interesting and enduring things that I love about Star Wars is the technology. Who hasn’t wished they could build a lightsaber? Who isn't interested in how a planet-destroying space station works? Even though we can’t quite make those things today, they all inspire our curiosity. Although they come from another galaxy, they seem like they are rooted in a little bit of reality. That makes it a perfect jumping off point for STEAM. In some cases, I also think Star Wars makes some of the classic science projects more interesting. Sure, you might have made a volcano out of baking soda and vinegar before, but making a Mustafar volcano puts a new spin on a classic experiment.

Liz Heinecke: The Star Wars universe is food for the imagination. From astonishing space creatures, gorgeous costumes, and dreamlike planets to loveable robots and mind-boggling starships, the series is bursting with science, technology, engineering, art, and math. Whether kids love art or are more into science, the storylines, ideas, and images in Star Wars are rocket fuel for creative brains.

StarWars.com: Why did you choose kids as your readers, as opposed to their parents?

Liz Heinecke: Modern kids are fearless engineers. In an age of how-to videos and kid-centric TV competitions, they know that they’re capable of making almost anything. Some of the projects in this book are simple, but others require more thought and may take some re-working and fiddling around. This is important, because while adults should be helpful, it’s our job to encourage kids to try to figure things out themselves. Hands-on building and experimentation are all about the creative process. Reading instructions, trouble-shooting, and even learning to take a deep breath, walk away and come back to a project are all skills that build resilience and confidence.

Cole Horton: The decision was already made by the editors at DK and Lucasfilm before we even got started. They came to us with the premise of the book, which led to a lot of brainstorming about the different projects. Like so many of the DK books I work on, we keep kids in mind because Star Wars is a great way to get kids interested in certain topics or reading in general. We often talk about reluctant readers, kids that might not gravitate towards other books, and how Star Wars can drive their interest in reading. In this case, we’re using Star Wars as a new way to talk about STEAM. Hopefully we can inspire a few reluctant scientists this time!

StarWars.com: Does any project stand out as a personal favorite?

Cole Horton: I love the Hutt Slime. With some green food coloring, baking soda, glue, and contact lens solution, you can make this awesomely slimy goo. Even better for me, it was an excuse to write about the criminal underworld of the Hutts. We got to include a brief look at the Grand Hutt Council, made up of really interesting characters from The Clone Wars. It’s a really interesting slice of lore that many people might not know about. I hope that readers are inspired to learn more after they make their first batch of Hutt Slime.

Liz Heinecke: My personal favorite is the Death Star Tractor Beam on the book’s cover, because my kids helped me papier-mâché and paint the prototype when I created the project. It was fun to open my refrigerator and realize that a cut-up egg carton would make a perfect Millennium Falcon. The Death Star we made together hung from our breakfast nook ceiling all summer while I worked on the book. I also really love the Space Rockets. You can make them fancy or with no frills, and it’s amazing how far they’ll fly!

Kelly Knox is a freelance writer in Seattle, WA. She shares her love of Star Wars and all things geeky with her daughter by creating kid-friendly DIY projects. You can find her on Twitter at @kelly_knox.