As Star Wars Insider Hits 200, a Look Back at Some of the Legendary Magazine's Most Memorable Issues

Insider editor Chris Cooper shares his thoughts on reaching a milestone and StarWars.com takes a trip down memory lane.

It's hard to imagine a time when Star Wars Insider didn't exist. That's how large the magazine looms in the fandom consciousness. Before, and even after, the advent of the internet it was the place to get breaking Star Wars news, read interviews with creators, and just immerse yourself in the galaxy far, far away, from movies to books to games. I remember getting my first glimpse of Episode I's gorgeous Naboo starfighters in its pages -- a magical thing to see and study and hold in my hands. That memory always reminds me of the power of magazines, print, and Insider. For that, I'll always be grateful.

Star Wars Insider #200 arrives today, a milestone issue and a testament to the power that the magazine has held for decades. To mark the occasion, StarWars.com caught up with Insider editor Chris Cooper and scoured Insider's archives for a look back at some covers you might remember. Here's to another 200 issues!

StarWars.com: What are your feelings about the legacy of Star Wars Insider as it hits issue 200?

Chris Cooper: There's something unique about Insider, and how it has continued to connect fans -- myself included -- with the Star Wars galaxy for so many years. Its longevity means it has been a big part of many people's Star Wars experience for almost as long as the saga has been around. Insider is more than a magazine, really. It's a part of our lives.

StarWars.com: Why is this milestone meaningful to you?

Chris Cooper: It's a rare privilege to become professionally involved with something you've loved since you were a child, so the very fact that I got to edit any issue of Star Wars Insider has meant a lot to me. To be in the chair for the 200th issue is actually a little surreal. I feel like with this issue I've been able to pay Star Wars back for all the pleasure it's given me over the years, and it's been a real pleasure to see how much subscribers have already been enjoying the issue.

StarWars.com: When you look back at all these covers [see below], what comes to mind?

Chris Cooper: It's amazing how much ground Insider has covered, and continues to cover, as Star Wars has grown and diversified. They show just how vibrant and versatile the Star Wars premise is, and how many different stories have spun out of George Lucas' original film. Which is a good job, as it gives us more to write about!

Of all those covers, issue 23 really stands out, as I can remember the thrill of discovering it in the original Forbidden Planet store in London. It wasn't widely available over here, so you had to be on your toes to get hold of each new issue. Little did I know that I'd wind up writing the cover-lines on those later editions. 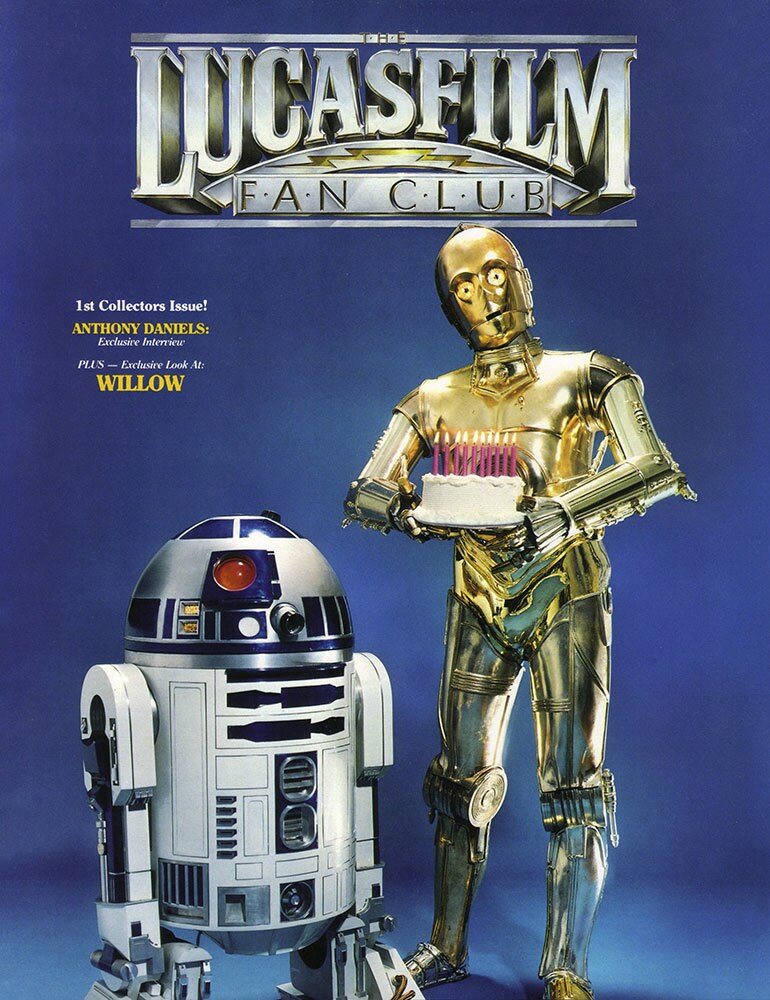 The first issue of the Lucasfilm Fan Club Magazine, published in the fall of 1987, featured R2-D2 and C-3PO holding a cake decorated with 10 candles -- marking the 10th anniversary of Star Wars. In his welcome letter, George Lucas wrote: "Ten years ago, when Star Wars premiered, I never dreamed that I would be writing a letter to members of a Lucasfilm Fan Club. What a decade this has been." George Lucas sat for an exclusive interview in this issue, discussing the future of Star Wars, and a possible timeline for the release of the first prequel trilogy. The first issue to be called Star Wars Insider hit newsstands in fall 1994, featuring Sir Alec Guinness on the cover. This "premier" issue included rare photos of the Star Wars Holiday Special, interviews with Carrie Fisher and Kenny Baker, and a special feature on the cult of Wedge. 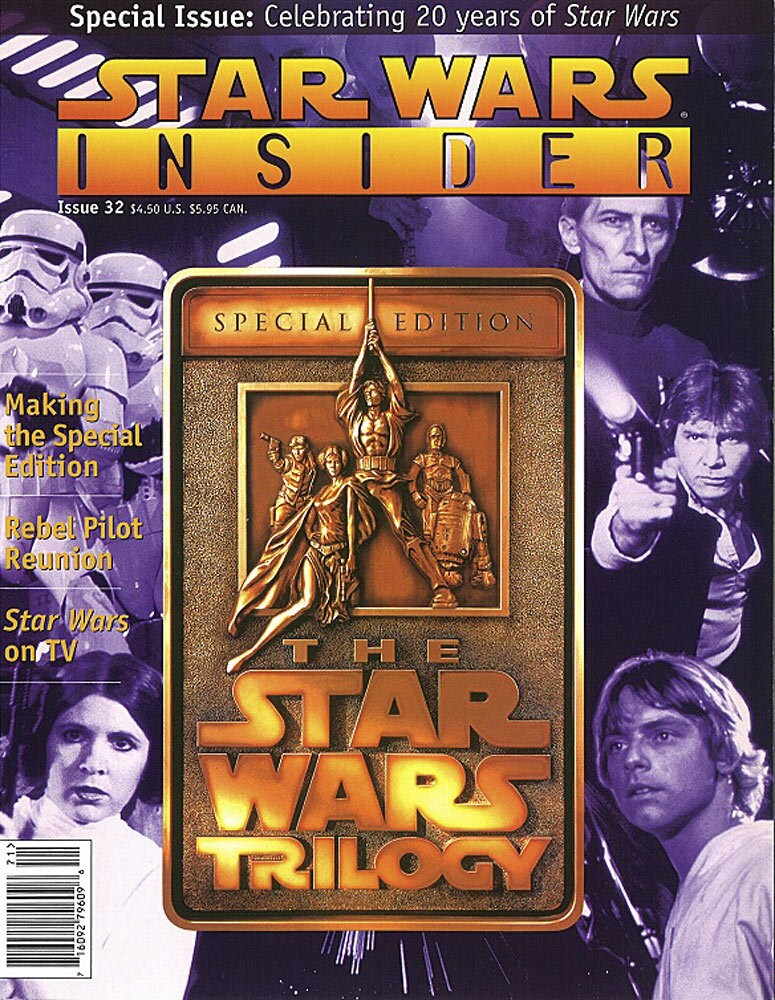 The year 1997 marked the 20th anniversary of Star Wars and saw the theatrical release of the Star Wars Trilogy Special Edition. This issue celebrated these two very special events with an exclusive feature on the making of the Special Editions, and a brand-new logo for the magazine. 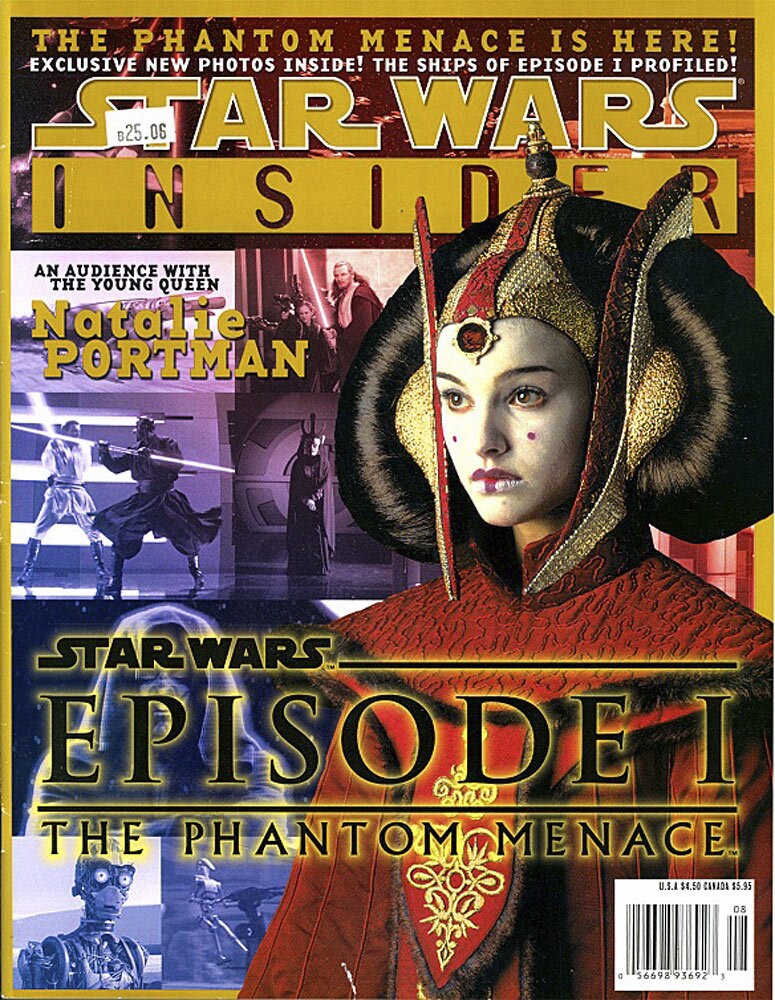 The 16-year wait for a new Star Wars movie was over. Insider covered the beyond highly-anticipated release of Star Wars: The Phantom Menace in a big way, speaking with Queen Amidala actor Natalie Portman -- then just 17 and in her senior year of high school. 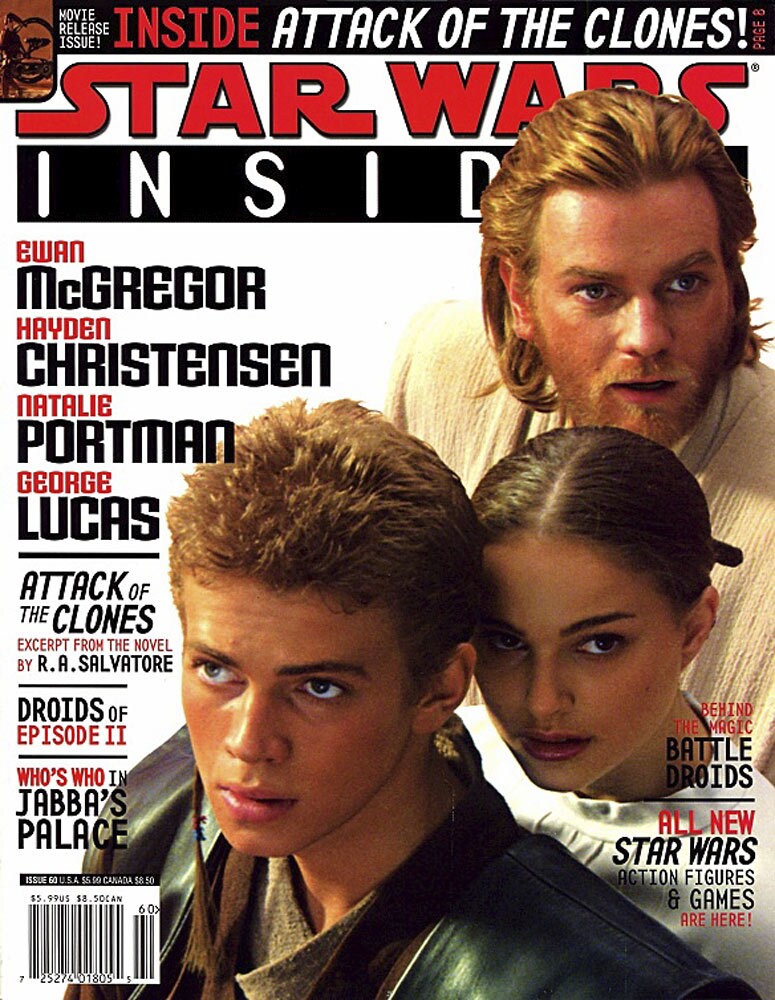 Fast forward to June 2002 and the arrival of Episode II. Insider covered the release of Star Wars: Attack of the Clones in memorable fashion, chatting with Ewan McGregor, Natalie Portman, Hayden Christensen, and George Lucas, plus a special report on what you may have missed in the second prequel. As The Phantom Menace went 3D for a return to theaters, Insider’s 3D movie edition took readers back to beginning with an exclusive look at the movie’s storyboards and 10 reasons "wesa" love Jar Jar Binks. This issue celebrated 30 years of Star Wars video games, from The Empire Strikes Back in 1982 to Kinect Star Wars, via arcades, TIE fighter simulators, The Force Unleashed, and Knights of the Old Republic. 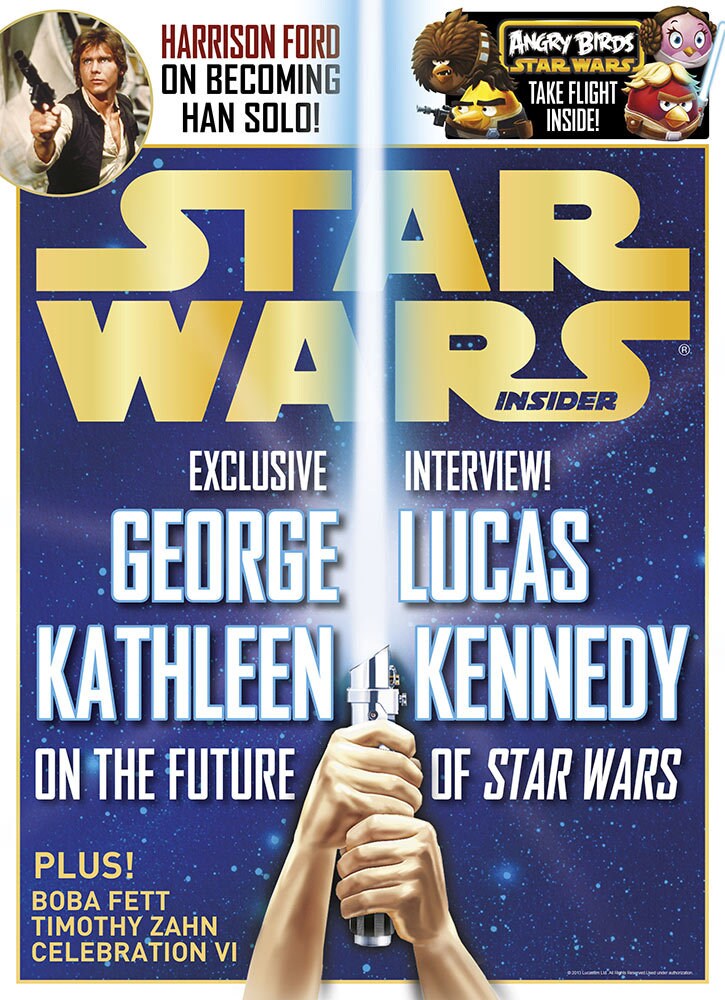 Just as this issue was going to press it was announced that Disney had bought Lucasfilm and that an all-new Star Wars movie trilogy was scheduled to be released, starting in 2015. Moving quickly, Insider secured an interview with George Lucas and Kathleen Kennedy in which they revealed what was coming next in the saga. 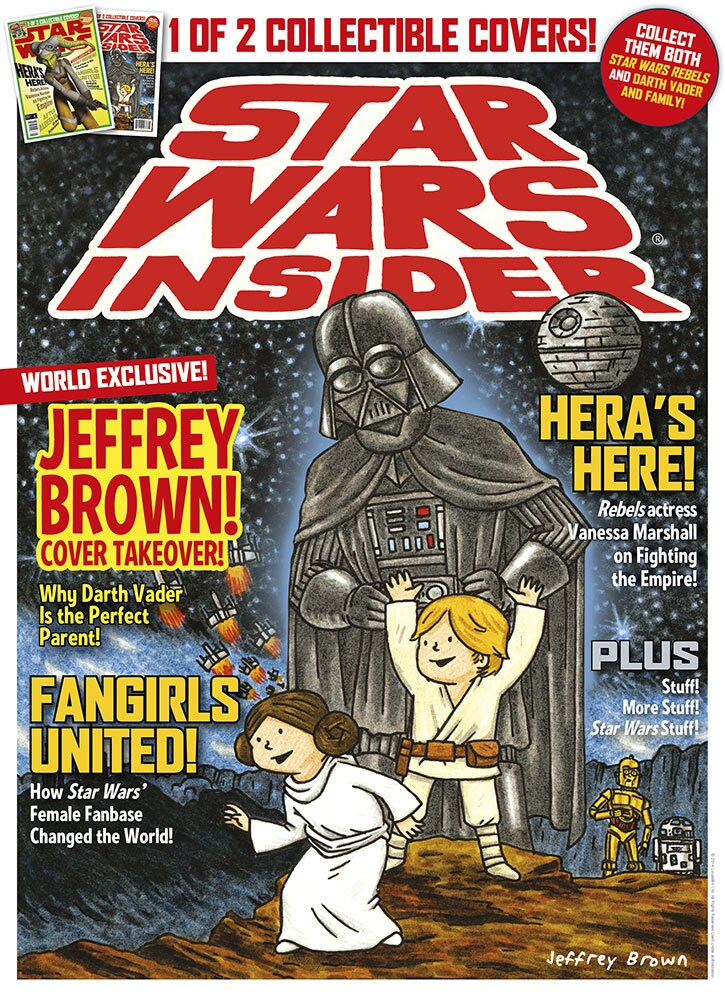 Jeffrey Brown’s work, particularly his Darth Vader and Family series, has charmed fans young and old; for this issue, Insider invited the writer/artist to take over the magazine’s cover. The result was this unique take on the original Hildebrandt poster from Star Wars: A New Hope. After years of waiting, the sequel trilogy had arrived. Star Wars: The Force Awakens finally hit theaters around the world and Insider featured interviews with the cast and crew in this celebratory issue. 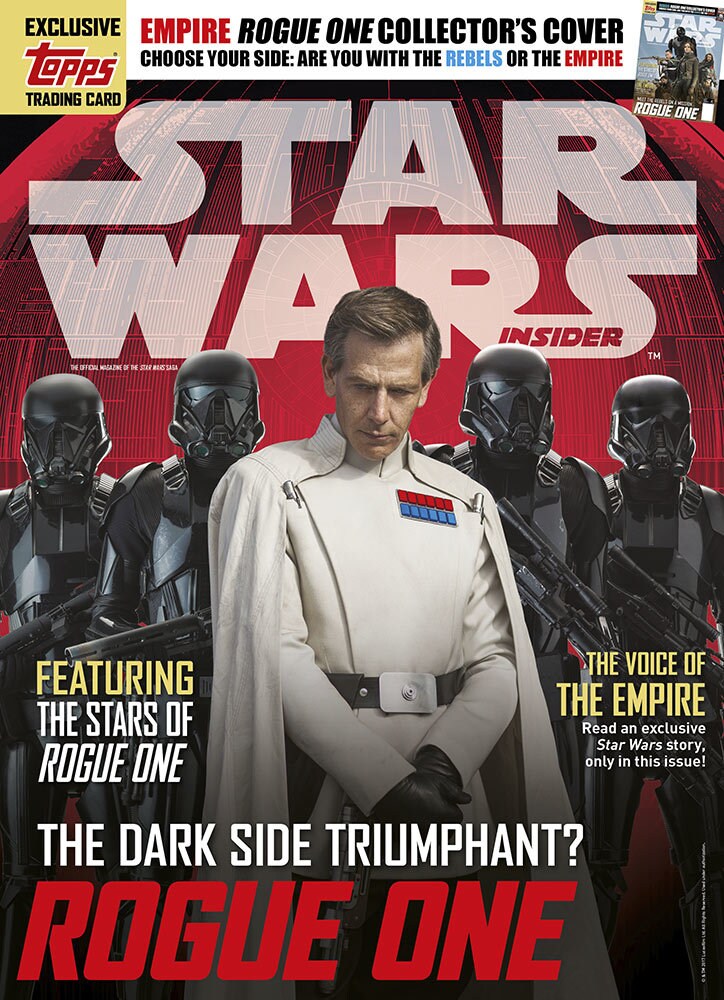 As Rogue One: A Star Wars Story landed in theaters, telling the story of how Princess Leia came to secure the plans to the Death Star, Insider's corresponding issue offered two covers that allowed readers to choose a side -- the Rebel Alliance or the Empire. With the heartbreaking passing of Carrie Fisher, Insider dedicated issue 171 to the Star Wars icon who meant so much to generations of fans. This issue marked the release of Star Wars: The Last Jedi, as director Rian Johnson discussed the making of the film. Insider stepped aboard the Millennium Falcon when it was still Lando’s pride and joy, and went inside the second Star Wars standalone film, Solo: A Star Wars Story. After a year revisiting each installment of the Skywalker saga, Insider heralded the release of Star Wars: The Rise of Skywalker with a deep dive into the climactic final episode. But what would come next? Star Wars entered a new phase with the live-action Disney+ series The Mandalorian, which would become a critically-acclaimed hit. Appropriately, Insider placed the Child front and center. Insider's landmark 200th issue arrives with an introduction by C-3PO actor Anthony Daniels and features spanning the entire saga, including an interview with Star Wars: The High Republic scribe Charles Soule, and an epic list of 200 reasons we love Star Wars.

In a special anniversary offer, subscribe now to Star Wars Insider and receive 8 issues for just $47.99 -- 40% off the newsstand price.